On May 8, 2010, in a ceremony in Montgomery, Alice McNeal, M.D., was inducted into the Alabama Healthcare Hall of Fame along with other members of the 2010 class of honorees. Dr. McNeal became the second anesthesiologist inducted; Robert A. Hingson, M.D., in 1999, was the first.

In September 1945, the first class of students began their studies at the Medical College of Alabama in Birmingham. This four-year school had replaced a two-year program in Tuscaloosa, and thus students no longer needed to leave Alabama to obtain a medical degree. The demands of creating this school quickly and almost from scratch led DeanRoy Kracke to open a few opportunities for female physicians. When the school opened, Dr. Melson Barfield-Carter, an Alabama native who had practiced radiology in the city since 1929, was named Professor and Chair of the school's Radiology Department. Three years later, Dr. Alice McNeal became the second female department chair at the Medical College.

Alice McNeal was born in 1897 in Hinsdale, Illinois. She graduated from Rush Medical College in Chicago in 1921, and during the next two years completed internships at Women's Hospital in Philadelphia and Durand Hospital in Chicago. In 1925 she began a stretch of twenty-one years as Anesthesiologist and Instructor in Anesthesia at Presbyterian Hospital in Chicago. During this period she completed a residency in anesthesia under Huberta Livingstone in 1926 and a second residency under Ralph Tovell in Hartford, Connecticut, in 1938 and 1939. Dr. McNeal was certified by the American Board of Anesthesiology in 1941. 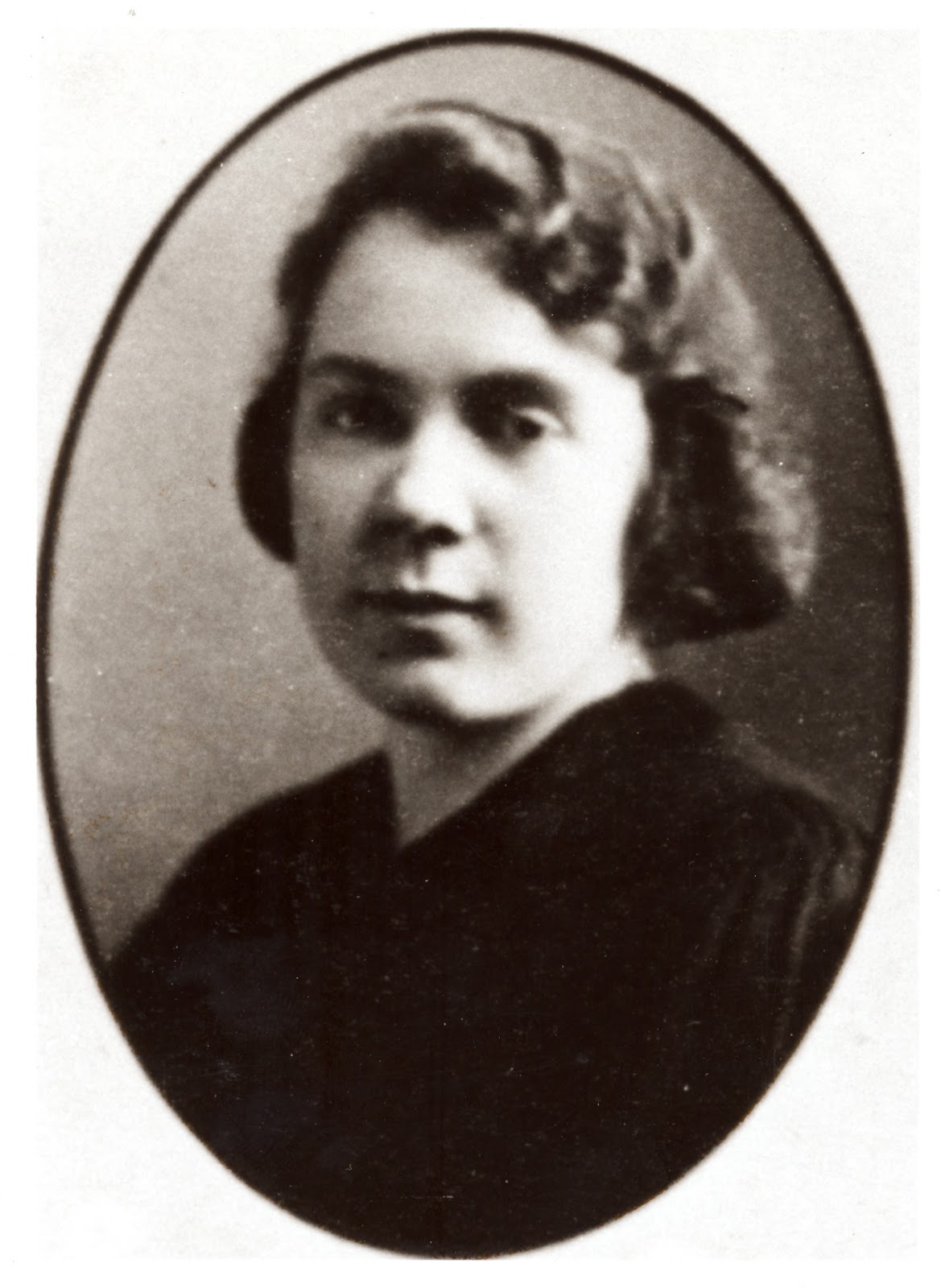 McNeal in 1921, at the time she received her Rush MC certificate

She received her M.D. the following year, one of 5 women among 129 total graduates

By early 1946, Dean Roy Kracke needed a Chief of Anesthesia for the hospital of the new medical school. Apparently John Adriani, a prominent anesthesiologist at Charity Hospital in New Orleans, was offered the position but declined. By May of that year Dean Kracke had persuaded Dr. McNeal to accept the post, and she arrived in Birmingham to become an Assistant Professor of Surgery and Chief of the Surgery Department's Anesthesia Division. In August 1948, Dr. McNeal was named Chair of the newly created Department of Anesthesiology and remained in that position until stepping  down in 1961. She retired the following year. Dr. McNeal died on December 31, 1964.

In October 1946 Dr. McNeal began organizing a School of Nurse Anesthetists at the hospital. In the spring of 1948 she was one of four founding members--and the only female--of the Alabama State Society of Anesthesiologists. As a result of her efforts, the department's residency program was certified by the American Board of Anesthesiology in February 1949. In that same year, under the auspices of the International Refugee Organization, Dr. McNeal made a nine-week trip to Munich, Germany, and lectured to some 150 local physicians on modern medical practices. She served as President of the Southern Society of Anesthesiologists for 1956-57.

Dr. McNeal’s professional career had two phases. At Presbyterian Hospital in Chicago, she worked under Dr. Isabella Herb and two other female anesthesiologists, Drs. Nora Brandenburgh and Mary Lyons. By the time she arrived in Alabama, she already had 21 years experience in anesthesia. In her new home, she found herself to be not only one of the few female physicians but one of the few physician-anesthesiologists in the state. In the early years, she coordinated anesthesia administration at the university's busy hospital (formerly the county hospital in the state's most populous county) with help from a few nurse anesthetists, an occasional resident, and sometimes a dental student doing an anesthesia rotation. By 1950 her department coordinated 9700 anesthetics a year at the hospital. 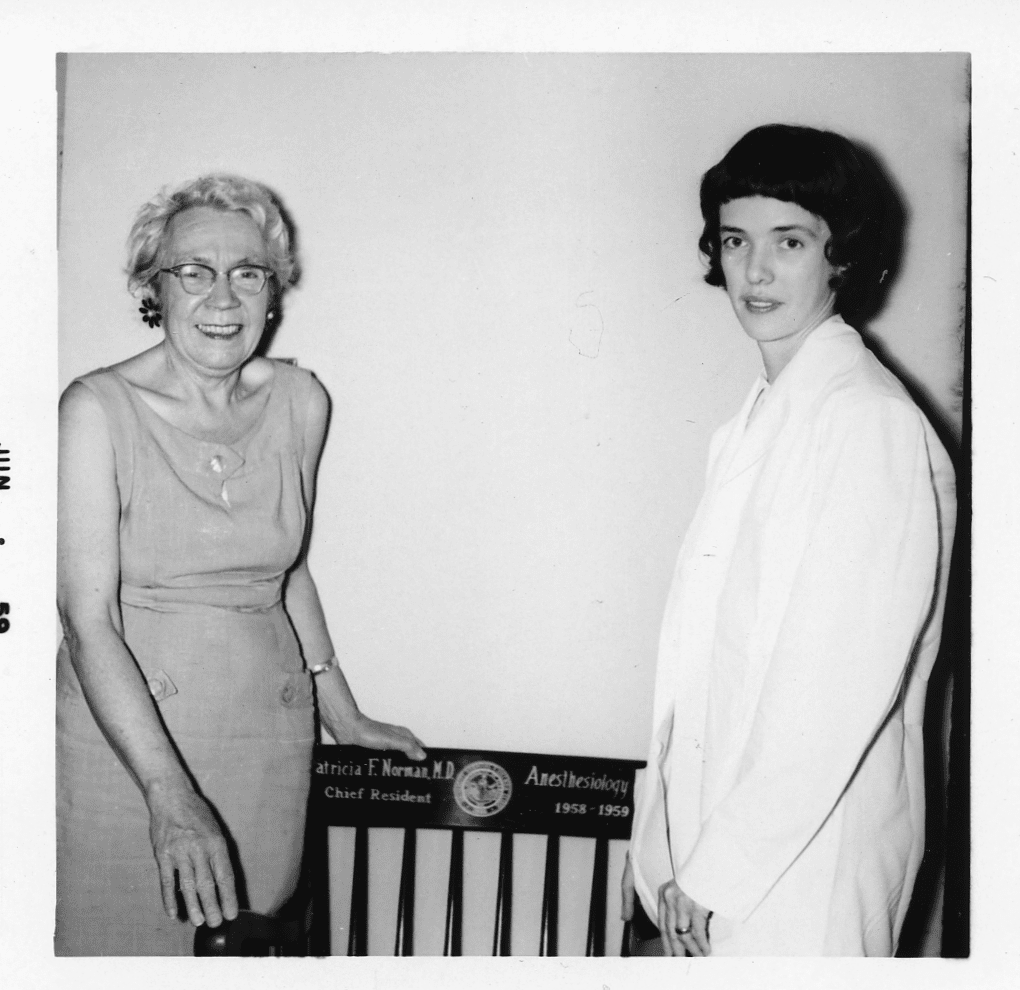 Dr. McNeal presents the Chief Resident’s Chair to Patricia F. Norman, M.D. in 1959. This tradition continued in the department into the early 1990s.

She is remembered fondly by those who knew her; former UAB President Dr. Charles McCallum's comment that she was "a great teacher, well-liked, and worked hard" is typical. Dr. McCallum also said “She loved to dance.”  [Source: my interview with Dr. McCallum in 1992] Jim Jones, M.D., a faculty member in her department from 1958 until 1960, remarked that “She dearly loved fine conversation, classical music and well-written books…and good scotch!” Dr. Jones also noted, "Alice in an interview shortly before her demise, denied being a pioneer but did admit to being perhaps a veteran in the field of anesthesiology." [Sources: written tribute by Dr. Jones, December 1971 and my interview with him in March 1996]

Former UAB President S. Richardson Hill, Jr., told me in a letter in June 1993 that "I liked her very much and thoroughly enjoyed her company...my wife was also very fond of her, and occasionally on special occasions they exchanged presents. At one time Alice gave my wife a beautiful pocketbook which she had made."

Unfortunately, Dr. McNeal committed suicide on New Year's Eve 1964. She had stepped down as Chair of the department in 1961, although she remained on the faculty for a year or so after that. McNeal was an only child; her parents were long dead, and apparently she had no reason to return to Illinois. Her body was cremated, but a gravestone for her can be found in Birmingham's Elmwood Cemetery. There the spirit of this stranger in a strange land rests along with many other individuals prominent in Alabama history.

Although she published only two research papers, Dr. McNeal created the foundation for academic anesthesia in the state by chairing the first department for so long, providing excellent patient care and many clinical improvements, and training so many anesthesiologists, dentists, and nurses. Dr. McNeal is thus an important figure both in the history of the state's medical education and its female physicians as well. She was the first female anesthesiologist in Alabama, and one of the first females to chair of an academic anesthesia department in the United States. In 1998 the University of Alabama Board of Trustees established the Alice McNeal, M.D., Endowed Chair in Anesthesiology in her honor. 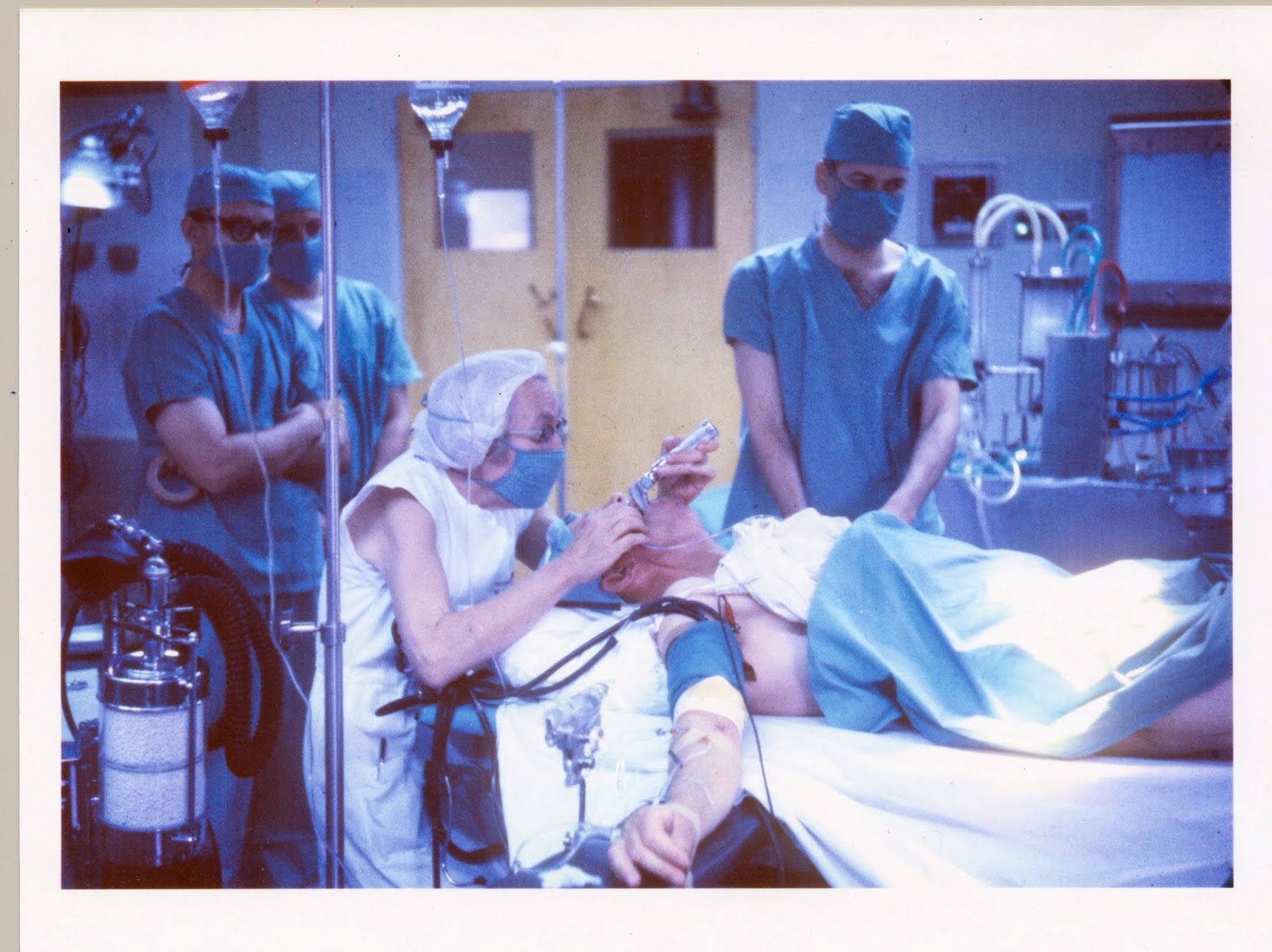 Dr. McNeal and others in the Hill Heart Suite, Medical College of Alabama, Birmingham in the early 1960s.
Source: Alvin Bearman, M.D. [one of her last residents] 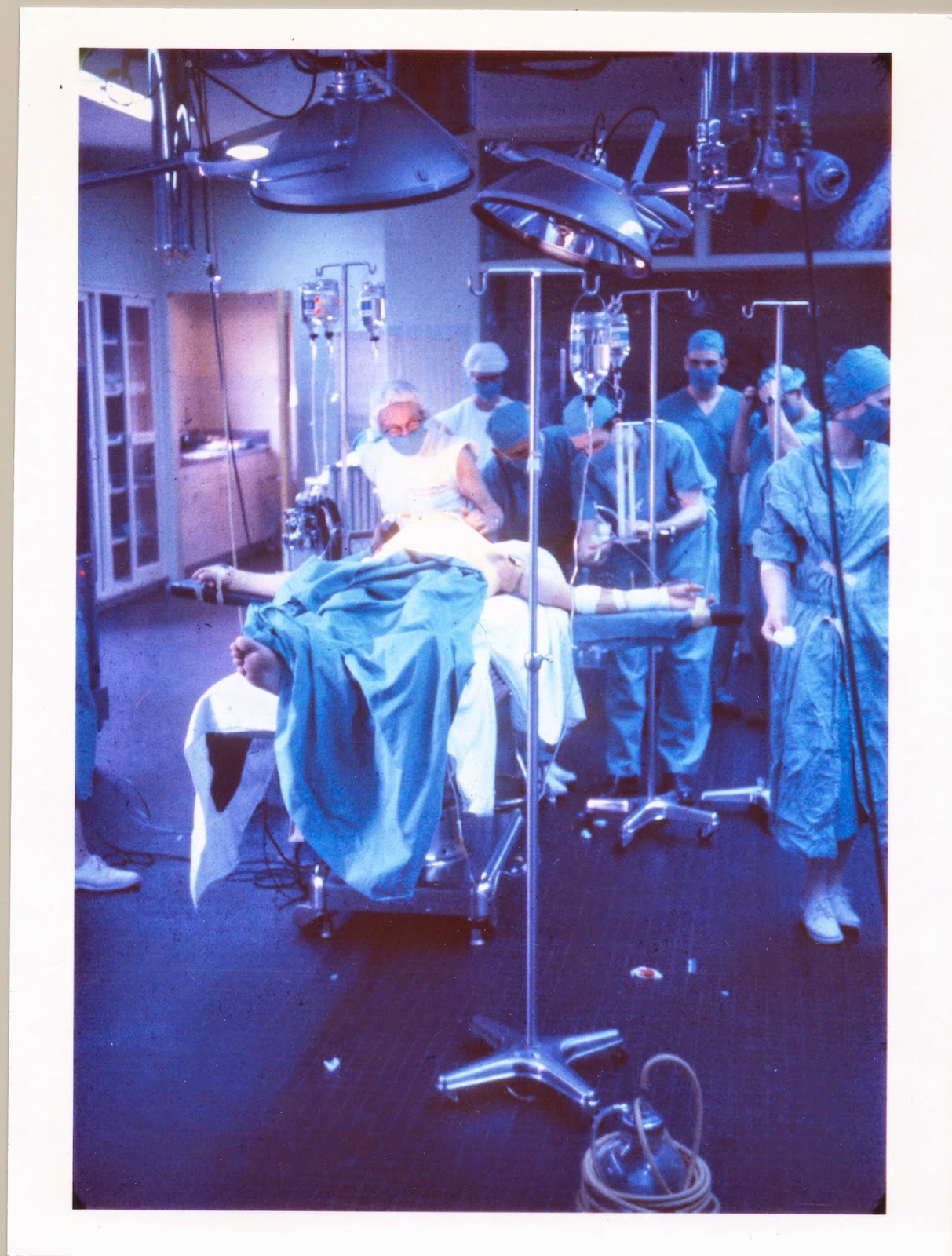 Two photos of Dr. McNeal during her time at UAB. 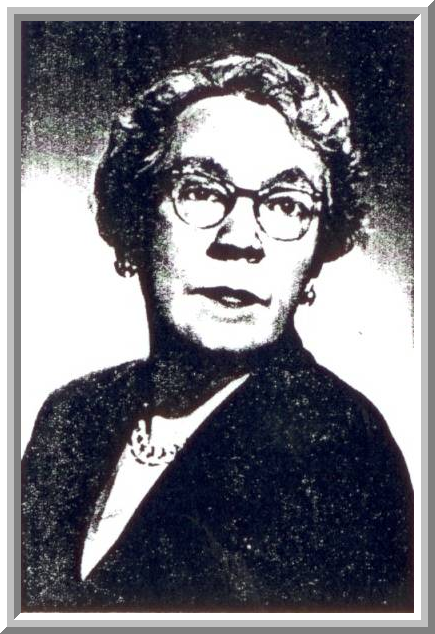 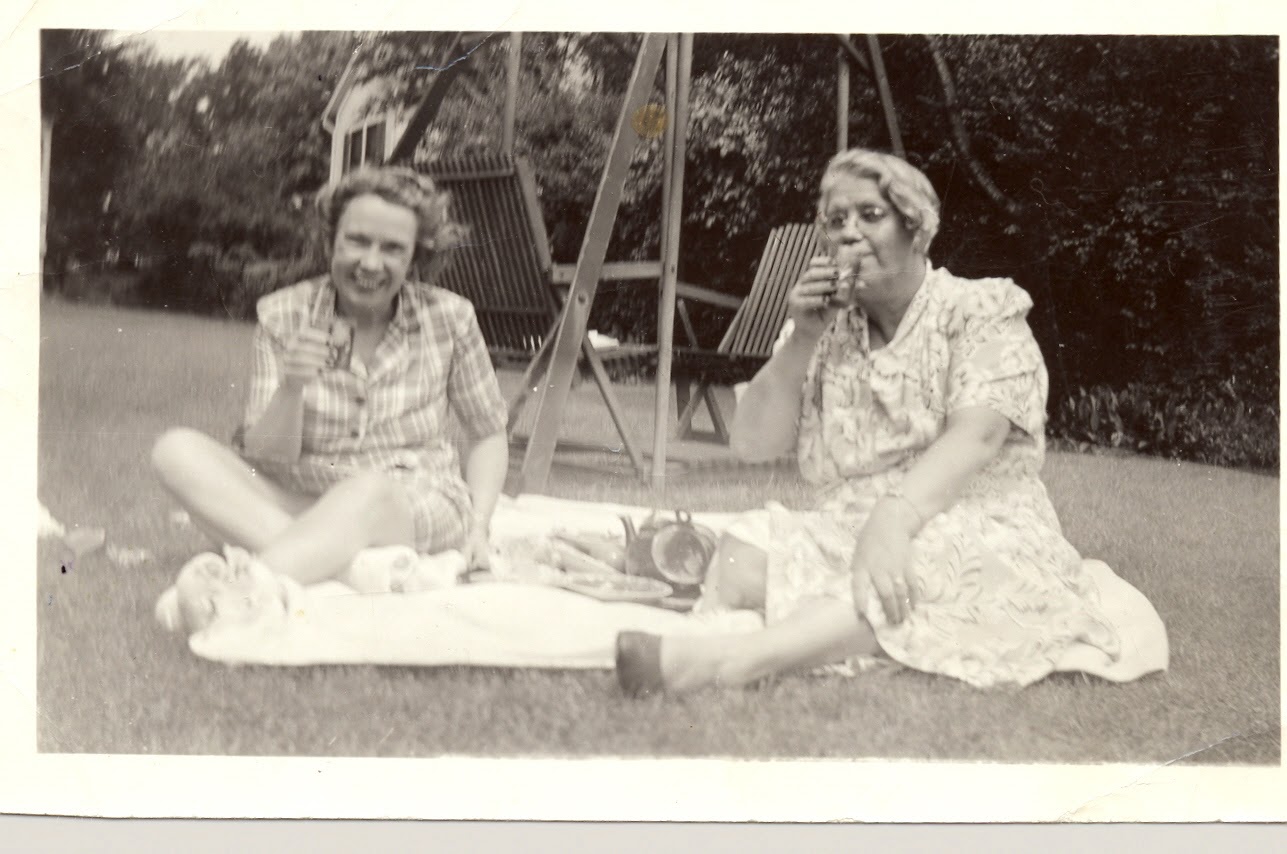 
•Graduated MC Phi Beta Kappa and AOA
•Woman on right may be her mother
•Photo taken in back yard of family home? 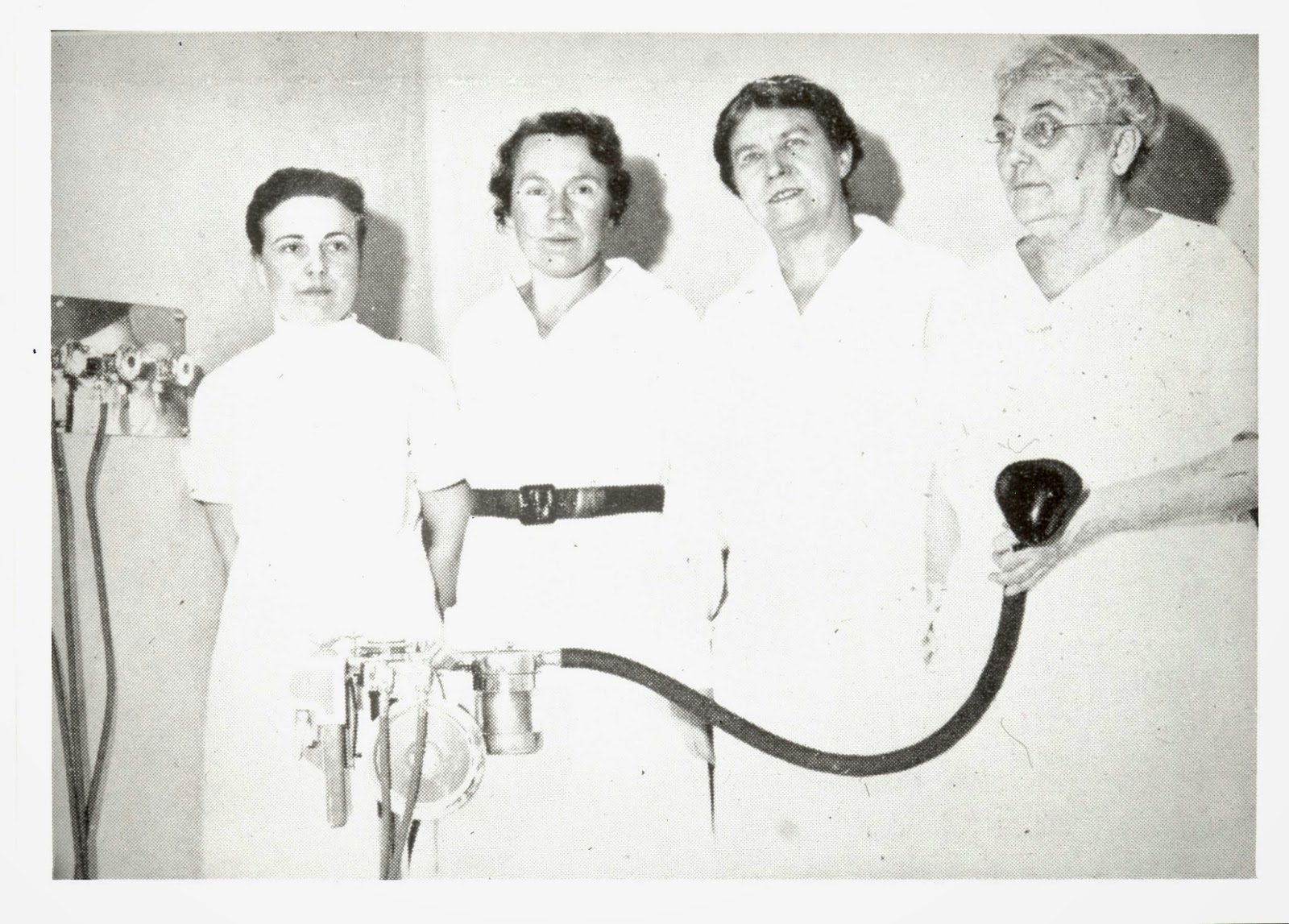 Julie Cole Miller has written a very nice profile of Dr. McNeal with some additional photos that is available here.

Posted by AlabamaYesterdays at 8:52 AM