Bruce Willis is one of the most recognizable movie stars working today. His film career began in 1980 with a bit part in The First Deadly Sin starring Frank Sinatra and Faye Dunaway. The part is uncredited; he plays "Man Entering Diner."

Since then he has found great success in such films as the Die Hard franchise, Pulp Fiction, 12 Monkeys, Looper and many others. He has worked very little in television, except for Moonlighting, the 1985-1989 series with Cybill Shepherd that made him a star. He won an Emmy and a Golden Globe for his role in the light-hearted detective show.

Back in March of this year an announcement appeared noting that Willis will make his Broadway debut this fall in an adaptation by William Goldman of Stephen King's novel Misery. The production is scheduled to open in November and run into early February 2016.

Willis is no stranger to the stage. Early in his career he acted in such Off-Broadway productions as Heaven and Earth and Bullpen.

So-what connections does Willis have to Alabama?

In the past couple of years he has been to Mobile filming several movies. The Prince was released in 2014 and Vice earlier this year. A third film, Extraction, has been filmed but not yet released. He and Nicholas Cage seem to be regulars in the port city lately.

Another connection? One of his daughters is named Tallulah Belle--perhaps after legendary Alabama actress Tallulah Bankhead??

And there is yet another connection from very early in his acting career. In 1981 he played the Sheriff in the Labor Theater's production of Railroad Bill at St. Peters Hall in New York City. The play was written and directed by Charles Portz, co-founder of the Labor Theater. The story was based on the brief career of black Alabama train robber Morris Slater--better known in song and story as "Railroad Bill."


So there you have them--the tenuous but fun connections of Bruce Willis to Alabama.

In a future post I want to explore the long career of Railroad Bill in blues and folk music over the past century. 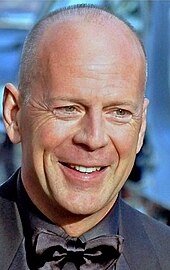 Bruce Willis at the Cannes Film Festival in 2006
Source: Wikipedia
Posted by AlabamaYesterdays at 12:51 PM