A Quick Visit to Mobile, Alabama (2)

Back in July we visited Mobile for a family gathering. We stayed at the Battle House Hotel and ventured up and down Dauphin Street when we had a chance and despite the heat. I covered some of what we saw in an earlier post. Here are some more of the sites along one of the city's iconic streets. 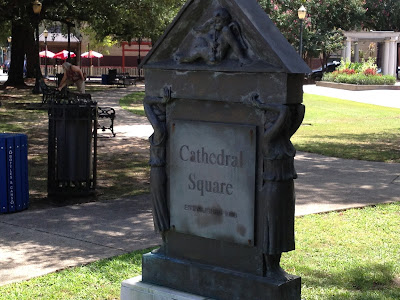 Cathedral Square is a city park across the street from the Cathedral of the Immaculate Conception, which was built between 1850 and 1884. The Square was once a Catholic Cemetery but most graves were moved in 1819. 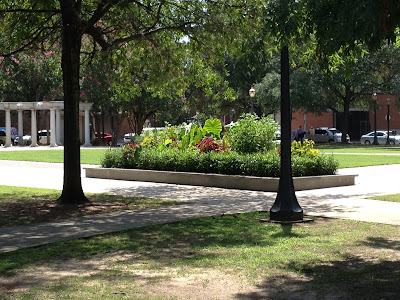 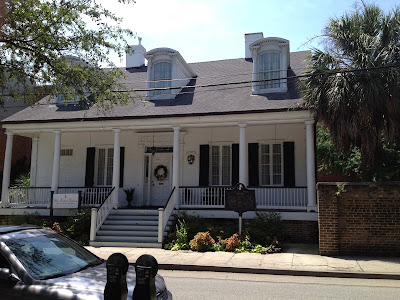 Located across another street from Cathedral Square is the Bishop Portier House. Mobile's first Roman Catholic Bishop Michael Portier lived here from 1834 until 1859. 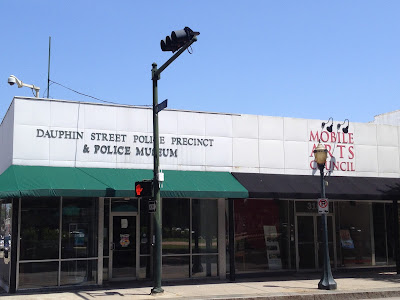 These two institutions are across the street from Cathedral Square. I found the juxtaposition interesting. More information can be found at the Mobile Arts Council web site and a 2009 article about the Police Museum. 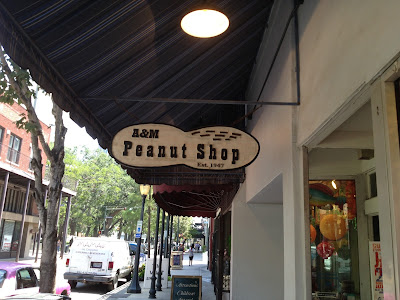 We could not resist getting something salty and something sweet from this business in operation since 1947. 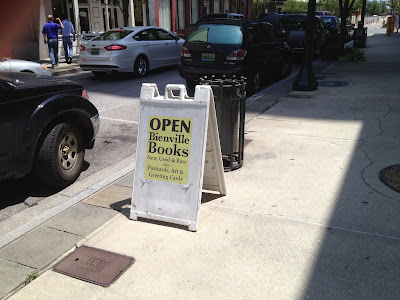 I'm always ready to visit local bookstores, and several of us made it to Bienville Books just across from the Square on Dauphin Street. Book lovers can spend some serious browsing time in this two-story haven. I especially enjoyed the local history section. 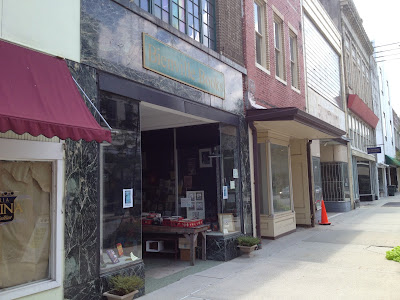 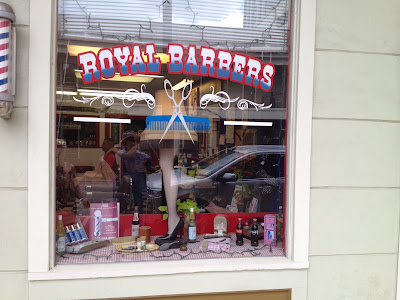 We were all excited to come across this classic American icon from the film A Christmas Story in the barber shop across the street from the Battle House. 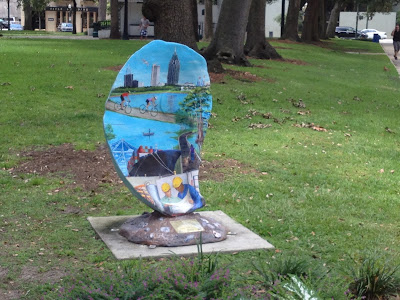 More than 25 sites now make up the Alabama Oyster Trail. Painted by local artists, the statues are meant to highlight restoration efforts in Mobile Bay. 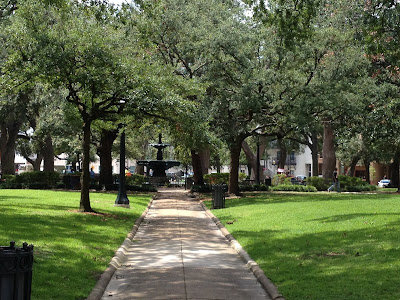 Beautiful Bienville Square is near the hotel. The entire block is now the park, but it started out as a plot of land deeded by the U.S. government to the city if used as a park. Over the years the city purchased the remaining land in the block and owned it all by 1849. At one time the Spanish Hospital stood in this block. The Square is named for the city's founder. 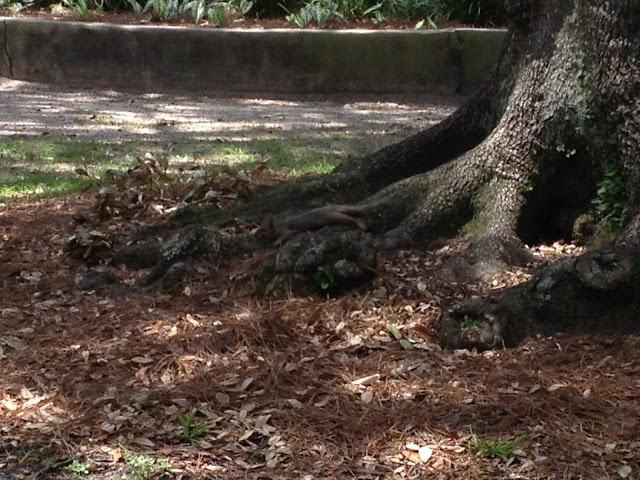 Even the squirrels seemed to be feeling the heat that day 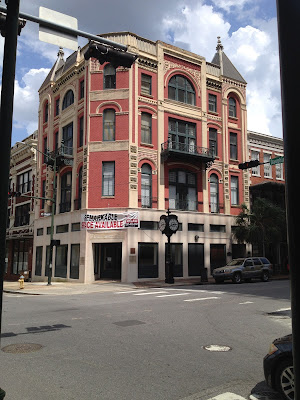 This building near the hotel is another example of the wonderful architecture being restored in that part of Mobile. 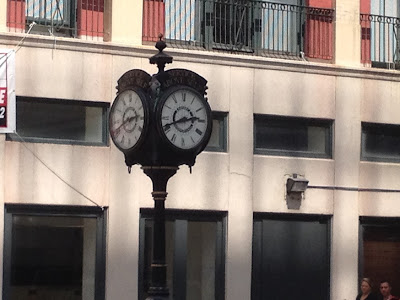 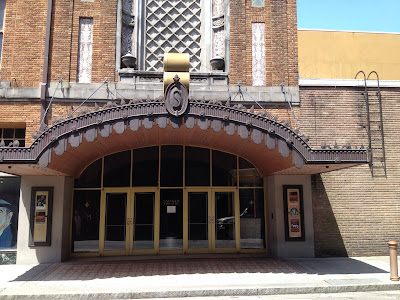 Opened in January 1927, the Saenger Theatre was the 61st facility in a chain throughout the South started by two brothers in New Orleans. The theater was built to resemble opera houses in Europe. Like so many theaters built in that era, the Saenger had many uses over the years and faced imminent destruction in 1970. Luckily the Saenger survived to entertain another day. 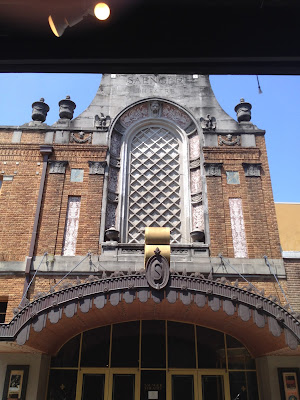 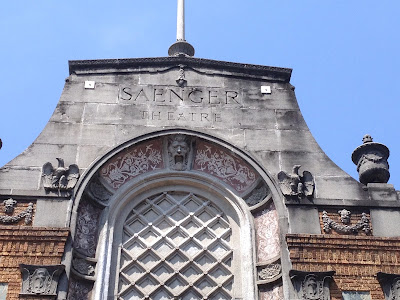 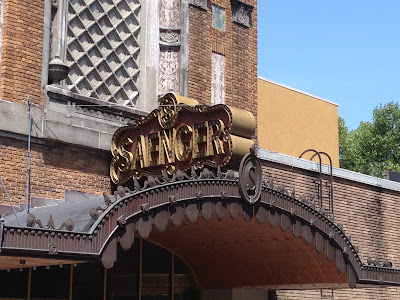 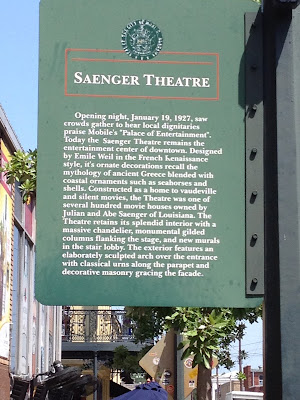 Posted by AlabamaYesterdays at 7:17 AM