On the eastern slope of the Serra Nevada Mountains in Inyo County, California, is an area of rock formations known as the Alabama Hills. The name originated in the exploits of the CSS Alabama during the Civil War. Prospectors mining for gold in the area and sympathetic to the Confederate cause began naming their claims after the warship. Eventually the entire area had that name.

In 1969 the U.S. Bureau of Land Management designated almost 30,000 acres of public land in that region as the Alabama Hills Recreation Area. The Hills are a popular spot for hikers, rock climbers, photographers, etc.

What does all this have to do with the movies? Well, quite a bit, actually. In the early 1920's Hollywood filmmakers discovered the Hills and since then the formations have been featured in numerous productions. The Internet Movie Database has 363 titles of movies and TV series episodes with the Alabama Hills-Lone Pine area as filming locations. The Museum of Western Film History in the town of Lone Pine documents that heritage in this area about three hours north of Hollywood.

Of course, many western films and series have used the area to film. But the Alabama Hills have also been used by productions as varied as Gunga Din, Gladiator, Django Unchained and the science fiction series Firefly. Alabama is thus connected in this minor way to many Hollywood productions. 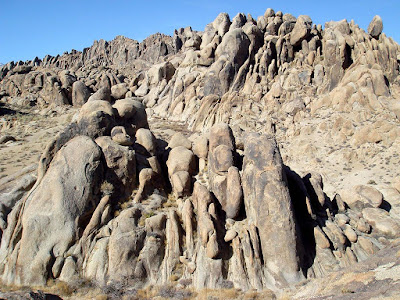 The photograph above shows some typical rock formations in the Alabama Hills. The one below shows the area that served as the Khyber Pass in the 1939 film Gunga Din.

Source for both photographs: Wikipedia 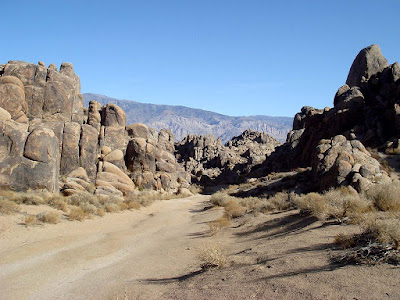 Posted by AlabamaYesterdays at 9:24 AM