In 1890 Hale Infirmary opened in Montgomery as one of the state's earliest hospitals for blacks. The facility was largely the work of one man, the city's first black physician, Cornelius Dorsette. I've written an entry on him for the Encyclopedia of Alabama, so let me quote myself on the origins of Hale Infirmary:

"Soon after his arrival in Montgomery, Dorsette had married Sarah Hale, but she died after less than a year. Her father was James Hale, the wealthiest black man in Montgomery at that time, and Dorsette convinced him that the city needed an infirmary for blacks. Hale donated land, and a white women's club helped Dorsette raise money for the building and its operation. The first such facility for blacks in Alabama, Hale Infirmary opened in 1890 and operated until 1958."

Dorsette came to Montgomery in 1884 at the urging of Booker T. Washington; the two were classmates at Hampton Institute in Virginia. By then Washington had been in Tuskegee for three years, and felt a black physician could be successful in Alabama's capital city. He was right.

Dorsette also had constructed a three story professional building on Dexter Avenue that included his office. He helped found and served as the first president of the National Medical Association, an organization for black doctors, and served as a trustee of Tuskegee Institute and as Washington's personal physician. Unfortunately after a hunting trip on Thanksgiving Day in 1897, he caught pneumonia and died.

Another prominent black Montgomery physician was also associated with Hale Infirmary. David H.C. Scott, an Alabama native, returned to the state after graduating from Meharry Medical School in Nashville. He practiced in Montgomery until his death in 1920, and often operated at Hale Infirmary which was on Lake Street near his office. Scott married the daughter of a prominent contractor, who built his son-in-law a three story building that housed a drug store and offices. Scott was also an important member of Dexter Avenue Baptist Church.

More information about Hale Infirmary can be found in the article below. As noted there, Hale Infirmary cost $7,000 to build its two stories that could hold sixty patients.

See also Thomas J. Ward, Jr.'s entry "Black Hospital Movement in Alabama" in the Encyclopedia of Alabama. Ward says the first hospital in Alabama for African-Americans was the one at Tuskegee Institute, which opened in 1892. However, the article below notes that the James Hale Infirmary Society was incorporated in Montgomery in 1889 and presumably the facility opened the following year. 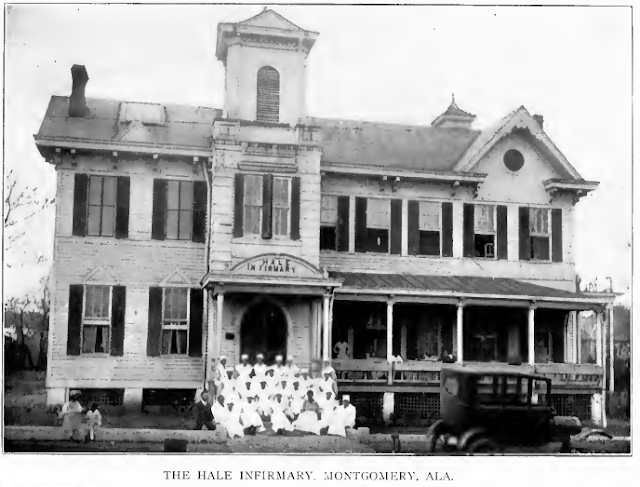 This photo and article depict the infirmary and staff in 1919. 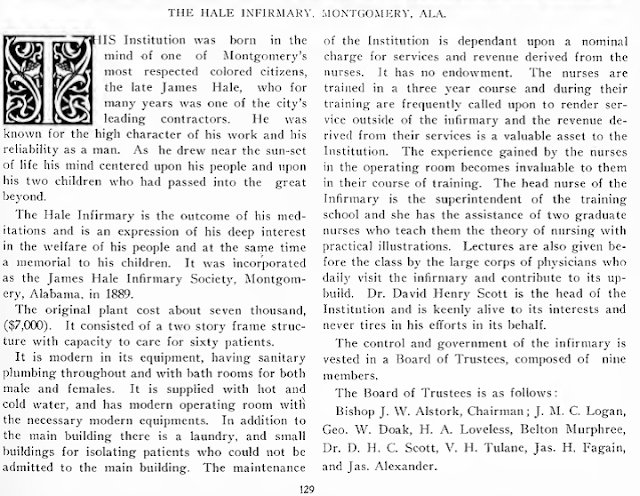 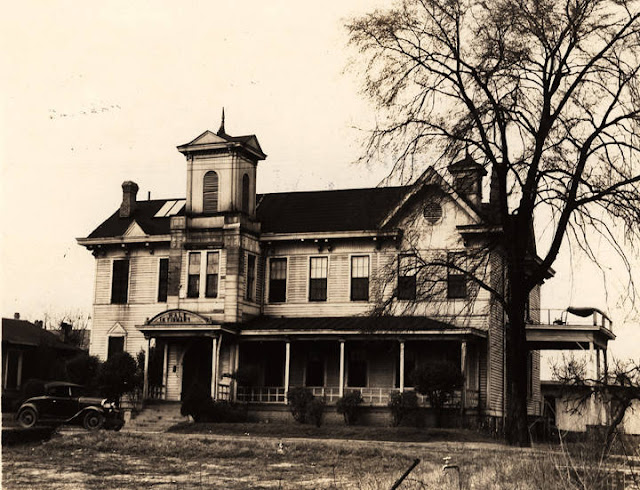 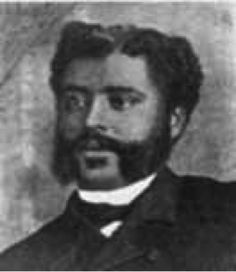 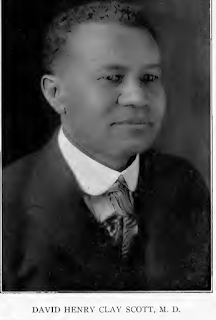 Posted by AlabamaYesterdays at 9:04 AM