In 1910 the city of Birmingham annexed the suburb of Avondale and its large park. The following year a new attraction was added--some animals in cages. This small group eventually expanded into a zoo that operated until 1934.

In 1913 an elephant named Miss Fancy was purchased from the Hagenbeck-Wallace Circus when it passed through town. She became the zoo's main attraction until it closed. At that time Miss Fancy and some of the other animals were sold to the Coleman Brothers-Clyde Beatty Circus who took them to their winter home in Peru, Indiana.

After 1934 Birmingham had no zoo until 1955, when the Jimmy Morgan Zoo opened. That zoo eventually became today's Birmingham Zoo.

The newspaper photo below was taken just before the decision to closed the Avondale Zoo was made. More information can be found in the caption.

As it does for so many things, the BhamWiki site has an extensive article on Miss Fancy. Various other photos and articles can be found on the Alabama Mosaic site.

Miss Fancy was born in 1871 and died in 1954 at the Buffalo, New York, zoo where she had lived since 1939. A small bronze statue of Miss Fancy was placed in Avondale Park in 2012 after the park's renovation. The statue was damaged, and a fund raising effort to replace it is currently underway. 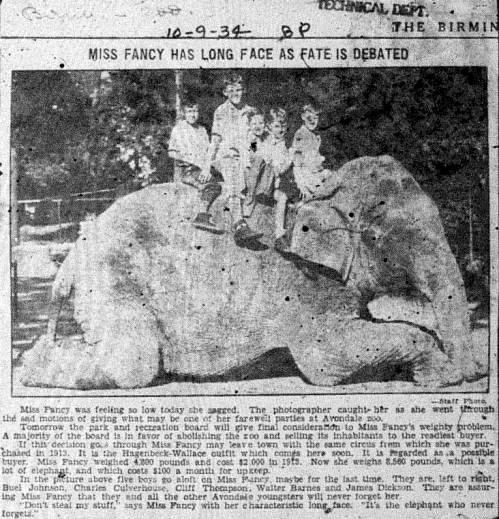 Posted by AlabamaYesterdays at 7:51 AM