My father Amos J. Wright, Jr. [August 26, 1926-July 31, 2003] spent just under two years in the U.S. Navy soon after the end of World War II. His tour sent him to the south Pacific on a small cargo vessel that sailed among a number of tiny  islands bringing provisions to U.S. personnel still on duty there.


In this post I let dad tell the story of that period via some journal entries he wrote years later and photos from the time. I've done some other posts about him on this blog. One shared photographs from his time at Auburn which was divided by his Navy years. He graduated in 1950. In another I looked at his work as a very active and longtime member of the Alabama Archaeological Society. Those efforts led to the publication of several articles and two books related to Native Americans in the state.

You can see other navy photographs of dad, a group portrait of his basic
engineering class at the Great Lakes Naval Station and a listing of the first crew
of the USS Errol in my blog post "Dad and the USS Errol". There are a number of photographs in dad's Navy
scrapbook I haven't used here; I'll probably do another post on the topic in the
future.

This material is taken from a handwritten journal he wrote from October
1993 until January 1999 about events in his life. I have corrected small matters
such as misspellings, missing punctuation and apparently missing words. I have
also added some paragraph breaks and a footnote. The photos below the text are
from the scrapbook dad put together; most have information on
the back that I have included.

I enlisted in the regular navy in July 1946 and was sent to Bainbridge, Maryland for boot camp. I was there for 12 weeks with no leave. Since I had one year of ROTC at Auburn they made me a company commander which afforded me a few perks.

When I finished boot camp I was given a 10 day leave in late October and went home. I went to Auburn and spent a couple of days there. I returned (all by train) to Bainbridge where they shipped me out to fireman's school at Great Lakes, Illinois. I was there all winter. We (our squad of 6) would fall out before daybreak and march a mile in the snow to chow. We had leave, and I went to Chicago and Milwaukee every week-end.

I met a girl at a skating rink and dated her the remaining time I was there. I graduated in March 1947 and was sent (by train) to San Diego. I was given a 10 day leave en route which was through Gadsden to New Orleans on to San Diego. I spent 30 days there (never knew what for) and went over to Tijuana on weekends. About 1 May they sent me to San Francisco where I stayed on Treasure Island in the bay for about 30 days before they loaded us on one of the troop ships (a former Presidents line) where we went to Hawaii and stayed there several days with shore leave.

Then we went to Wake Island and on to Guam taking about 2 weeks. At Guam I was assigned to the USS Errol AG 133. It was a small (175') cargo ship that was brought in from the Philippines for refurbishing. We spent about two months getting her sea worthy. About 1 July 1947 to 1 July 1948 we took 3 week trips to Saipan, Tinian, Truk, Ponape, Ulithi and other islands carrying frozen cargo to navy personnel on these islands. We had large walk-in reefers (freezers) in the hold which had to be checked every hour. This was my job when I was on watch which we stood 4 hours on and 4 hours off when under way.

We also carried natives and their goods between the islands as they had no other transportation. Sometimes the deck would be covered with men, women and children where they ate and slept. One trip we carried the coffin of a high ranking princess, and when I went down in the hold to check the reefers I had to walk right by her casket which was made out of wicker kind of like a large basket. It smelled like a fir tree. The ship would moan and groan and I was scared out of my wits every time I had to go down there.

The reefers would have frozen strawberries and other goodies destined for officers' clubs, and we would carefully open one end of a carton and pilfer a few packages sealing up the carton where no one would notice. We had to serve a month as mess cook (assisting the cook in cooking, preparation and cleaning up).

We only had a crew of 13 , a Lt. (captain), a warrant officer (second in command), 3 chiefs and 8 white hats. We were authorized to hire natives to travel with us. We had about 6 who lived on the deck but ate with us. They were good workers. One of them I became good friends with--Ackuous. He was from Truk and was the one who got  me the Japanese 25 cal. rifle that I sent home. I wrapped it in asbestos tape with the bolt on the stock. I went to the navy P.O. and mailed it home. Mother told me when she picked it up at the P.O. in Gadsden they told her I could not ship a gun in the mail like that--it was against regulations. It's a miracle it even got there travelling 10,000 miles.

In early 1948 we sailed from Guam on one of our supply trips to Ponape [1] in the Caroline Islands. We anchored in the bay there and were not allowed to go ashore. These were about three week trips. We anchored in sight of Ponape and a smaller island nearby. We could see a small dock on the smaller island and watched as small boats went over each day from Ponape carrying supplies to a leper colony on the island. The supplies would be unloaded on the end of the dock, and the boat left. Then the lepers would come out on the dock and get the supplies. We were so far away we could only tell that it was people.

We would go swimming here off the ship. Someone had to stand guard on the bridge of the ship with a carbine to ward off any sharks but we never had any trouble.

On our return trip one night I was asleep and was suddenly jolted from my bunk. I knew we had collided with something. I ran up the ladder and came out of a hatch to the deck. I was still holding the sides of the hatch when a great gust of water swept down the deck. Alarms were going off and flood lights on.

I ran forward on the deck and saw we had run aground on a reef. They reversed the engines and tried to back off but to no avail. Our radio operator sent out an SOS and the first station to reply was Hawaii--thousands of miles away. We had to wait 2 or 3 days for a seagoing tug to come from Guam. He hooked on and pulled us off. We had ballast space under the ship and the second hull was not crushed. The tug escorted us back to Guam.

Our Captain who was an old navy man about ready for retirement was court martialed and relieved of command of any ship. We white hats never knew what really happened, but we heard that the log showed a disagreement between the Captain and first officer on what the course should be.

We went into dry dock [at Guam] and remained there about four months while the ship was repaired. During this time the ship was given a complete overhaul--engines rebuilt, hull scrapped and painted, etc. While we were there we were hit by a typhoon. All ships went to sea to ride her out but of course we stayed in the dry dock it being so large that we had no problem. After the typhoon passed the coconut trees looked like telephone poles--being stripped of all foliage.

Just a few weeks after we got out of dry dock I was shipped back to San Francisco at Treasure Island for discharge. I was there for about 2 weeks being processed. We weren't required to work and had liberty on the weekend. One Saturday morning I was in line checking out to go on leave, and a Chief Petty officer came up and collected all our passes. They put us on a bus and took us to San Francisco where we had to march in a St. Patrick's Day parade up Market Street. It was after noon before we got our passes back.


******
1. Panope is now known as Pohnpei. Another former name was Ascension Island. Panope was under Japanese control during World War II; about 2000 troops were stationed there. The island was shelled several times by American battleships including the USS Alabama. The Wikipedia article on Pohnpei notes,
"On April 1, 1865, the CSS Shenandoah surprised four United States whalers at Ascension Island (Pohnpei) and destroyed them all. The local king, Nananierikie, was delighted to receive much of the spoils from this action.[19]"

Dad's description of his Navy time ends here. In one of the small notebooks
where she kept diary-like entries, household expenses and such, Rosa Mae
Wright also wrote about her son's navy experiences and gave a few more details.

Dad doesn't mentioned a hospital stay, so I'm not sure what my grandmother
means by that reference. Dad had a lifelong aversion to hospitals and illness,, so maybe he didn't want to remember the details.

Below are photos and further comments. 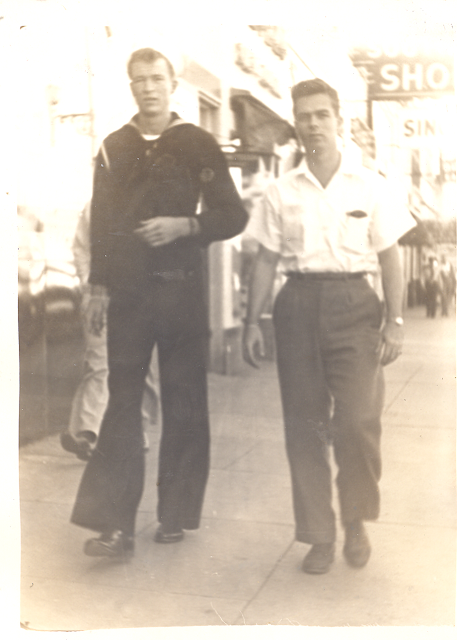 On leave in Gadsden 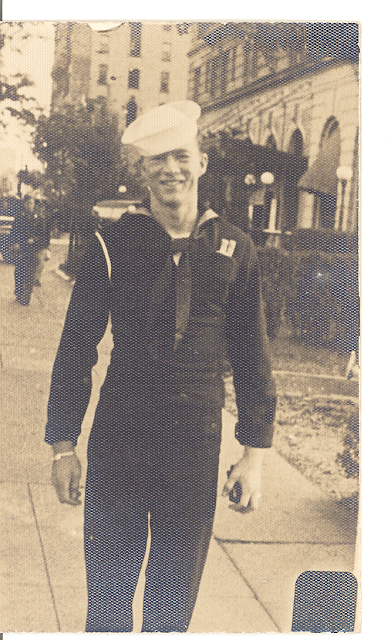 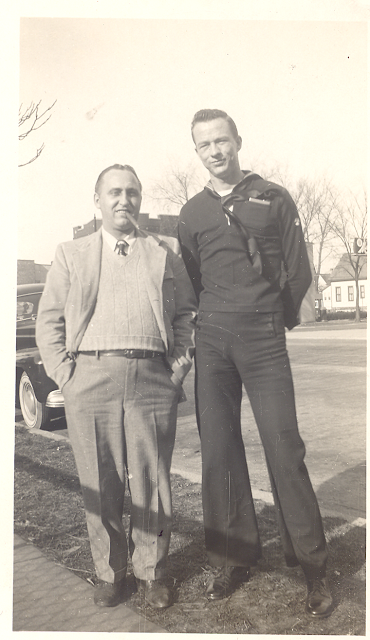 Dad wrote on the back of this one, "Long 'n' short of it. Turkey Day 11/28/46". This photo would have been taken during his training at Great Lakes. The other man is unidentified. 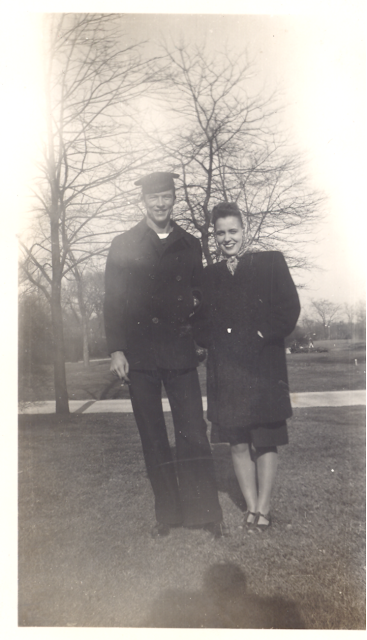 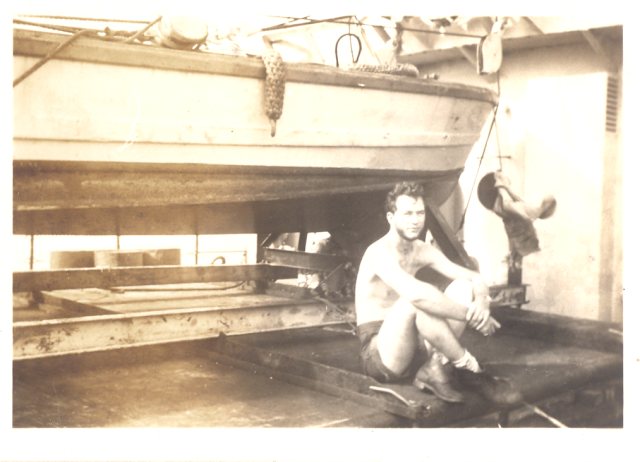 At sea in the South Pacific in October 1947. This photo is the only evidence we have that dad ever wore a beard. 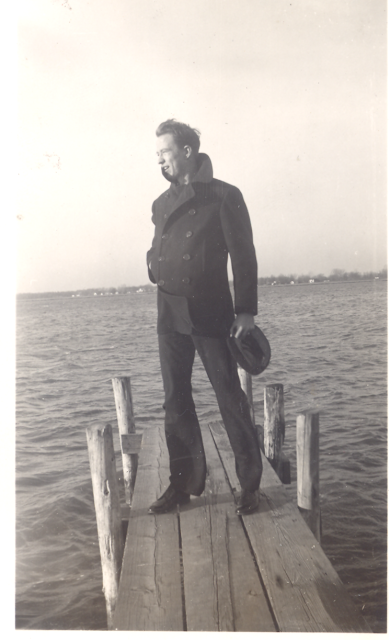 Another shot at Fox Lake 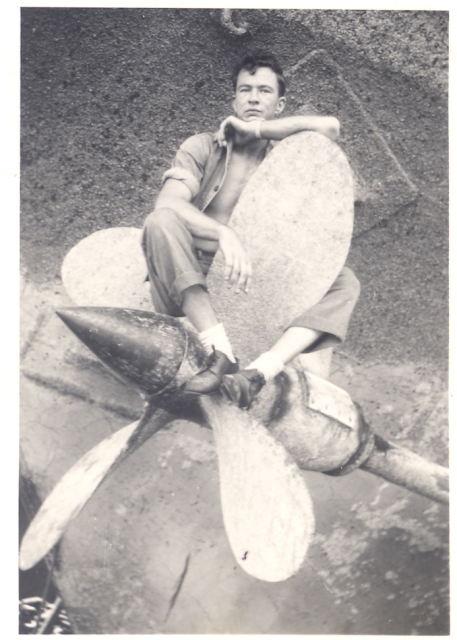 In dry dock at Guam 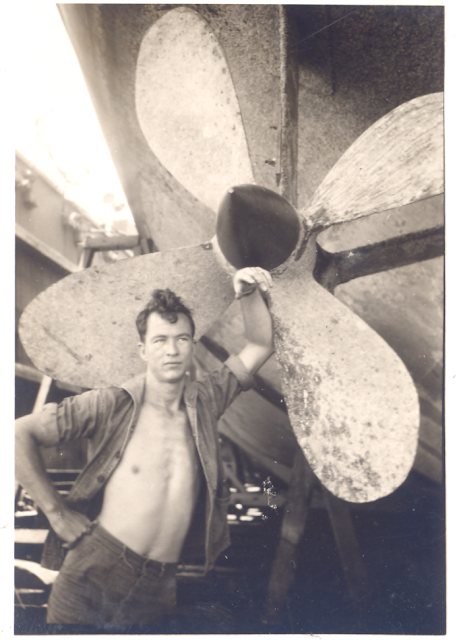 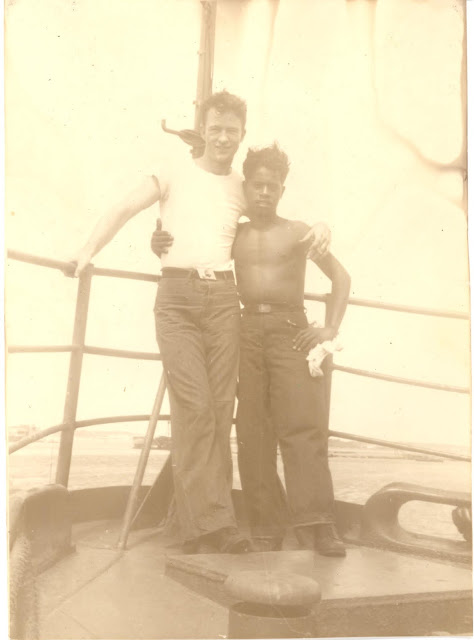 Dad and his friend Ackuous 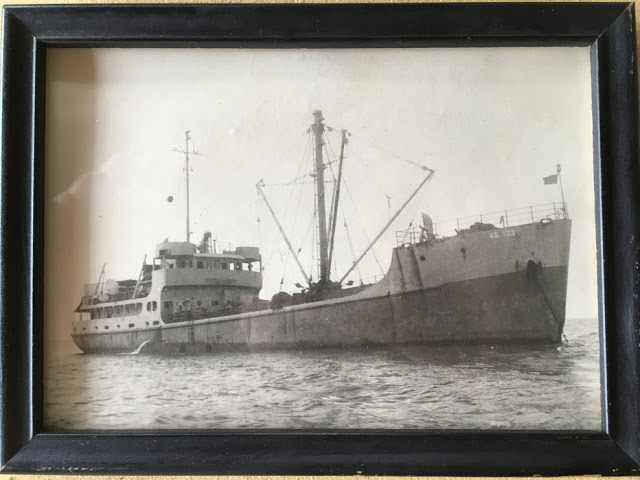 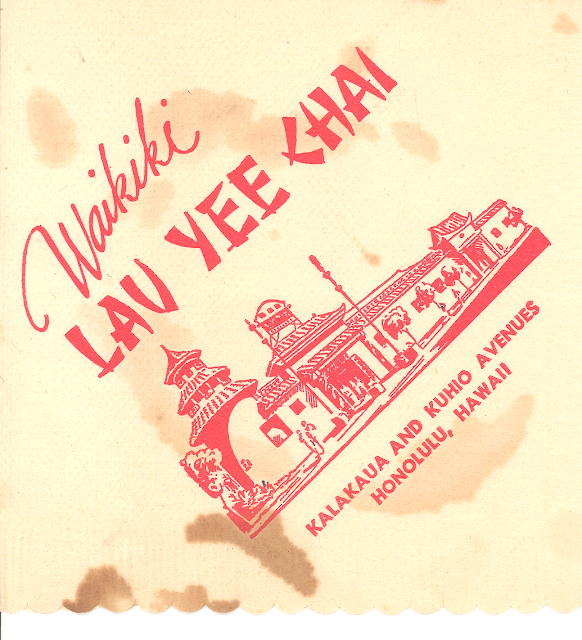 Lau Yee Chai was one of the most notable restaurants in Honolulu before, during and for some years after World War II. You can read about it and see photos here. Dad is on the left in the photo below; I presume they are waiting to enjoy some food. 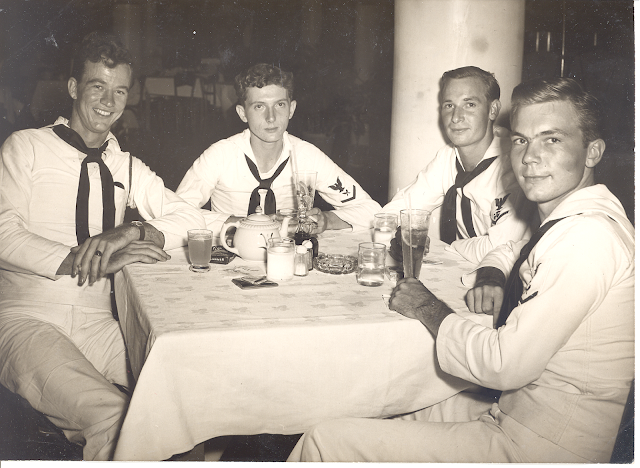 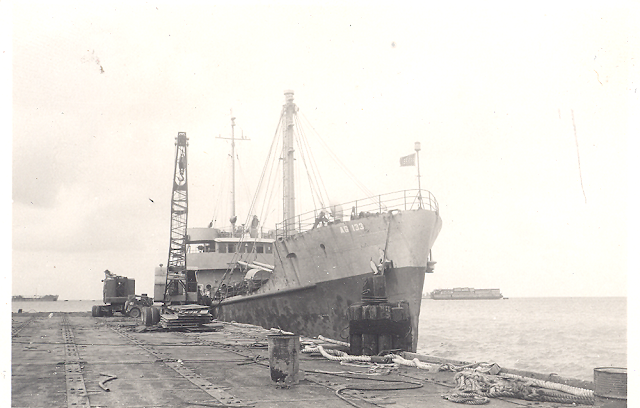 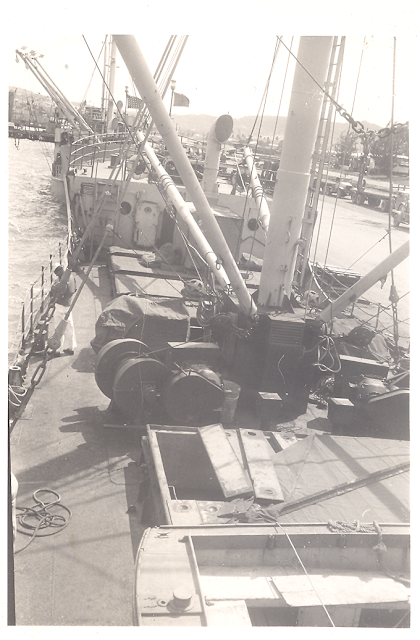 The deck of the USS Errol in Guam February 1948 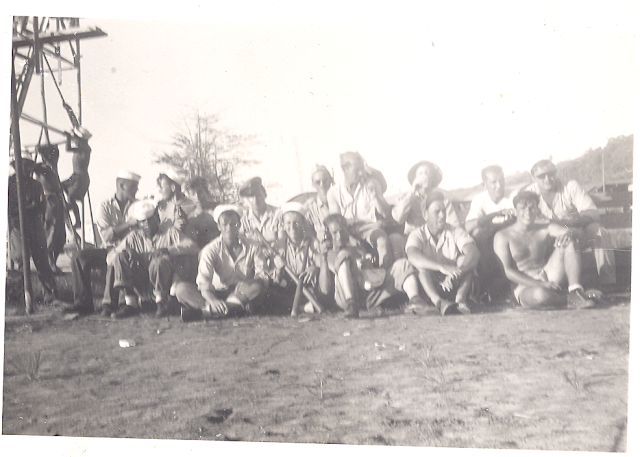 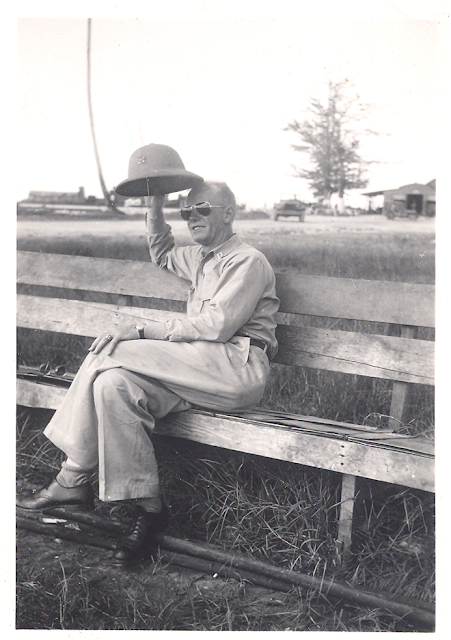 The Captain on Truk Christmas Eve 1947. This would have been the first captain Lieutenant Russell Quartus June, who served until September 14, 1948. 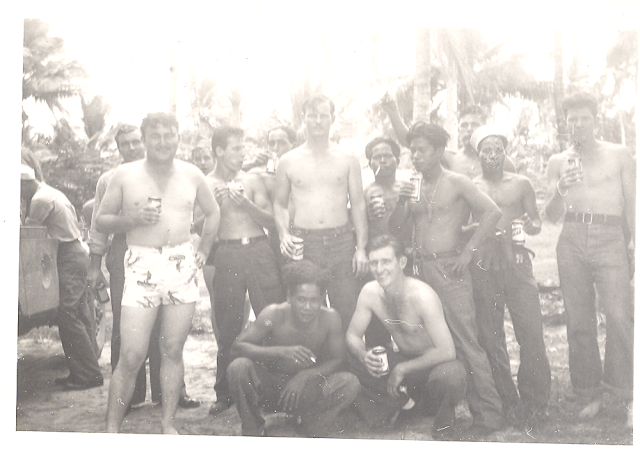 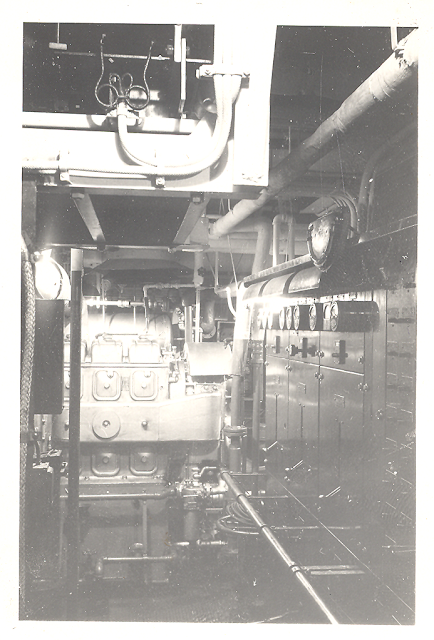 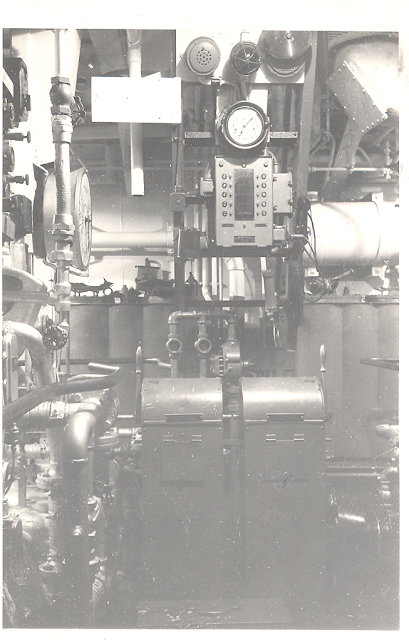 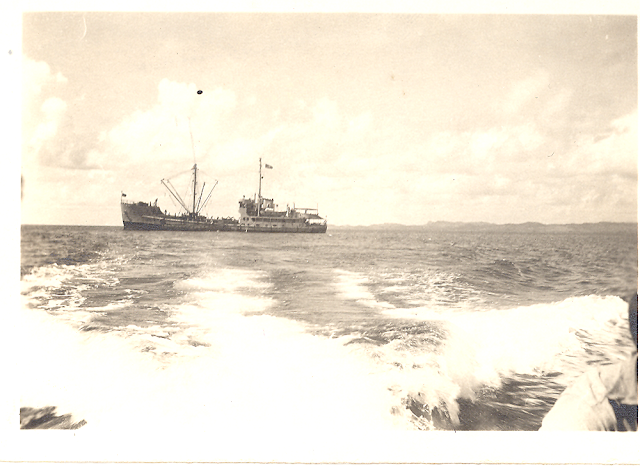 The USS Errol at Koror October 1947 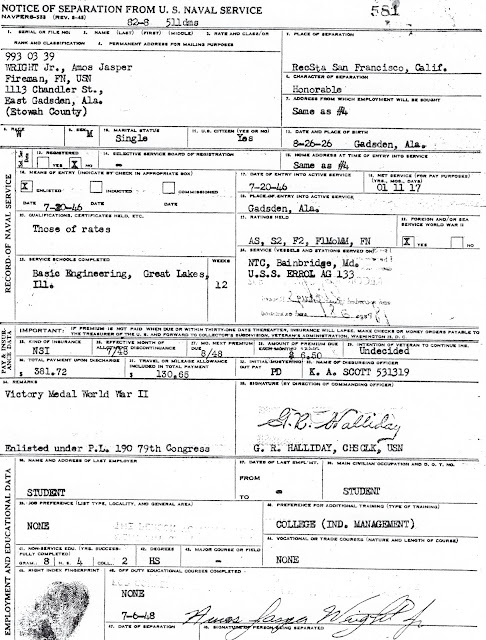 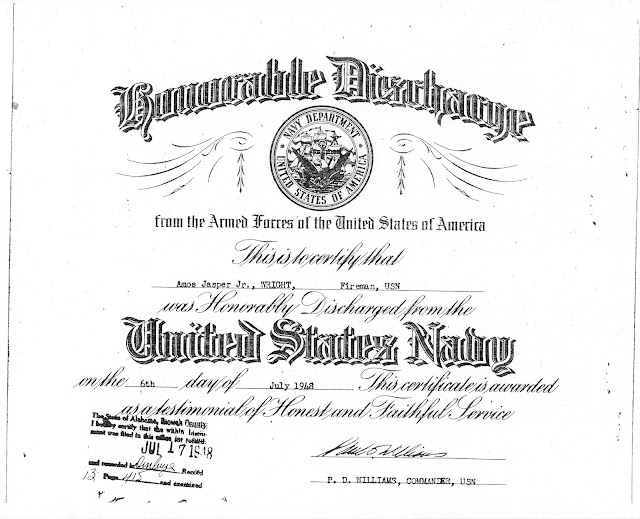 
Posted by AlabamaYesterdays at 8:54 AM