The U.S. Navy has commissioned three ships named after the city of Birmingham. The first, a light cruiser, was in service from 1908 until December 1, 1923, when she was decommissioned. The vessel was sold for scrap on May 13, 1930.

In the early years the first USS Birmingham participated in activities in the West Indies and along the South American coast She also served with the Atlantic fleet as a flagship in 1914 and 1916. When the U.S. entered World War I the Birmingham patrolled the U.S. Atlantic coast and then became part of the escort for the first troop convoy to France. She continued operating in European waters until the war's end, and then spent the rest of her service based in San Diego.

The USS Birmingham has two claims to important events in the history of flight. On November 14, 1910, a civilian pilot named Eugene Ely made an airplane flight from the deck of the ship. He piloted a Curtiss Model D biplane designed by Glen Curtiss in making the first airplane takeoff from a warship. In April and May 1914 the Birmingham operated in Mexican waters looking for mines. On April 25 off Veracruz one of a pair of Curtiss Model F flying boats made the first U.S. military mission of a heavier-than-air aircraft from the deck.

Another important event on the Birmingham took place on November 4, 1910. Seaman G.H. Kephart fell overboard into freezing water off Hampton Roads, Virginia. Chief electrician William E. Snyder jumped in and rescued Kephart. Snyder was awarded the Medal of Honor for his heroism. 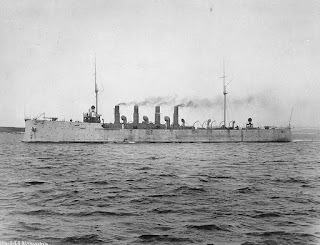 USS Birmingham in 1908 perhaps during a trial run 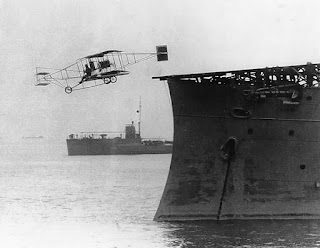 "The airplane plunged downward as soon as it cleared the 83-foot platform runway; and the aircraft wheels dipped into the water before rising. Ely's goggles were covered with spray, and the aviator promptly landed on a beach rather than circling the harbor and landing at the Norfolk Navy Yard as planned."

On January 11, 1911, Ely again made aviation history when he took off from a racetrack in San Bruno, California, and landed on a platform on the armored cruiser USS Pennsylvania. According to his Wikipedia entry, "This flight was also the first ever using a tailhook system, designed and built by circus performer and aviator Hugh Robinson."

Ely continued exhibition flying until his death in a crash in Macon Georgia, on October 19, 1911, aged 24. In 1933 Congress awarded him a Distinguished Flying Cross for his contributions to civilian and naval aviation.


Posted by AlabamaYesterdays at 10:31 AM