"Mr. Roberts" began life as a novel by Thomas Heggen first published in 1946. The story subsequently appeared in a 1948 play, 1955 film, 1965-66 television show, and a 1984 live broadcast TV movie. The most famous of all is no doubt the 1955 film that starred James Cagney, Henry Fonda, Jack Lemmon and the great William Powell in his last film role. I recently watched it again for the first time in a while and naturally my ears perked up at a couple of mentions of Alabama.

Heggen served on board two cargo ships in the South Pacific during World War II. He developed his novel from short stories he wrote based on that experience as an assistant communications officer on the USS Virgo and the USS Rotanin. His novel was an immediate hit and quickly sold over a million copies. Heggen collaborated with producer-director Joshua Logan on the play two years later. Henry Fonda starred as the title character, and the play was also a major success. Heggen and Logan shared the first Tony Award for Best Play.

Heggen did not live to see the film's success; he drowned in his bathtub after a sleeping pills overdose in May 1949.

The film's two mentions of Alabama are related to the crew's shore leave toward the end of the film. To put it mildly, through most of the story the crew has been kept on a tight leash by the unpopular captain of the USS Reluctant. When finally given shore leave, the crew indulges in some serious drinking and high jinks. You can read about some of it below.

Mister Roberts is a funny movie with great performances by all and well worth watching if you haven't seen it. You can read the plot details at the Wikipedia entry.

I have no idea if these Alabama references below appear in the novel or the play or how they ended up in the film instead of, say, Georgia. Original director John Ford had to bow out due to health issues. The film was finished by Joshua Logan, co-author of the play and director of the Broadway production. Logan was born in Texas and grew up in Louisiana, so there's a least a southern connection there. 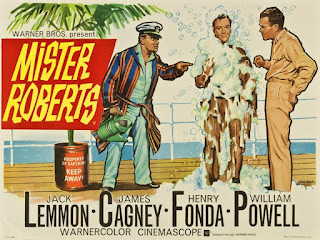 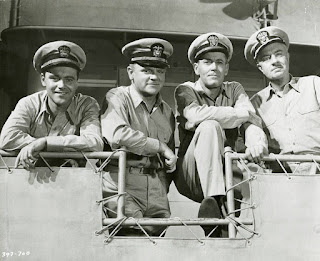 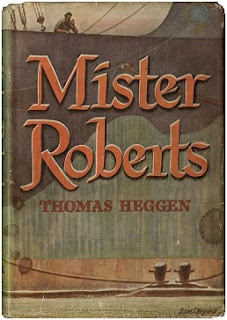 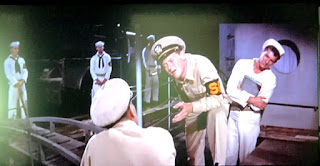 Shore Patrol Officer: A little while ago, six men from your ship broke into the home of the French Colonial governor. They started throwing things through a plate glass living room window. We found some of the things on the lawn. Large world globe. Small love seat. A lot of books. A bust of Balzac. The French writer. We also found an Army private first class. He was unconscious at the time. He claims they threw him, too.
Lt. j.g. Douglas A. Roberts: Through the window?
Shore Patrol Officer: That's right. It seems he took them there for a little joke. He didn't tell 'em it was a governor's house. He told 'em is was, uh... well, what we call in Alabama...
Lt. j.g. Douglas A. Roberts: Yeah, we call it the same thing in Nebraska.
Shore Patrol Officer: Well, that's about all, Lieutenant. If it makes you feel any better, Admiral Wentworth says this is the worst ship he's ever seen in his entire naval career. 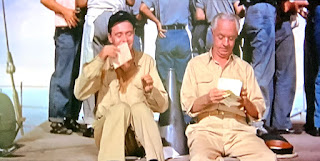 Near the end of the movie Ensign Pulver is going through his pieces during mail call. He picks up the first item, smells it, smiles and says, "Ahh, Alabama, I'll save that one for later."


Presumably "Alabama" is the woman Pulver met on shore leave; he comes back to the ship in a rather dreamy, satisfied mental state!

Posted by AlabamaYesterdays at 10:26 AM