Here's the latest batch of links to just-published Alabama history and culture articles. Most of these items are from newspapers, with others from magazines and TV and radio station websites. Some articles may be behind a paywall. Enjoy!

Meet the local elementary student who's published children's books - Bham Now
Bham Now
Glitter the Unicorn goes from Birmingham to across the pond · Check out Callie's advice for other children with big dreams · Giving back to Children's of Alabama.
The stories behind Alabama's murals of Hank Williams - al.com
al.com
She is buried next to Hank in Oakwood Cemetery Annex in Montgomery. To mark the site of their impromptu wedding, artist Wes Hardin painted a mural ...
30 cool indie bookstores across the country that you'll want to check out - 10Best
USA Today 10Best
From improving literacy or helping get books to children in need, ... Alabama, The Haunted Book Shop is an indie bookstore with lots of character.
Artifacts found dating to before Alabama became state - AP News
Associated Press
A state team funded by a grant recently conducted a dig at the northwest Alabama site, which is the site of a museum that focuses on the history ..
After 2020 celebration postponed, FBC Salem marks 175th anniversary - The Alabama Baptist
Alabama Baptist
“It was wonderful to see people come back who had not been there in a while,” he said. During the special service, Babson presented a brief history of ...
Opinion | Honoring the memory of Harold Alonzo Franklin - Alabama Political Reporter
alreporter.com
Harold A. Franklin graduated from Alabama State College, now University, ... approval of a graduate history program at Alabama State University.
Posted by AlabamaYesterdays at 3:48 PM No comments:

Who Was Joseph E. Pullum?

Sometimes I'm researching something and follow it down a rabbit hole that leads to another rabbit hole. And here we are...

I recently watched PBS' "American Experience" episode on Alabama native Joe Louis and his June 1938 championship fight with Max Schmeling. Well worth watching, by the way. During the program I heard a song from the 1930's about Louis on the soundtrack. Hmm, I thought, I wonder who wrote and sang that ditty. A little time on Google led me to a 2001 New York Times article discussing  the songs written about Louis. In it the author noted that composer and music researcher Rena C. Kosersky has identified over 40 songs about the boxer from the 1930’s & 1940’s. The first was Joe Pullum’s “Joe Louis Is the Man” recorded 27 July 1935 in San Antonio.

Lo and behold, Pullum was born in Anniston. Let's investigate.

According to the Alabama Select Marriage Indexes, 1816-1942 [Ancestry.com], his parents William Pullum and Dora Ross were both Alabama natives and married in Calhoun County on April 3, 1898. The family moved not long after Joseph's birth, since the 1910 U.S. Census shows them living on Andrews Street in Houston, Texas. In addition to Joseph and his parents, the census lists two older siblings, William Jr. who was ten years old and Carlton, who was six. By the 1920 census, they had moved to Meyer Street and added sister Evelyn, who was eleven, and Mary A. Ross, presumably Dora's mother, to the family group.

By 1930 only Joseph and his parents were listed in the household at 1211 Arthur Street. The record notes that he could read and write and worked as a presser in a cleaning shop. The 1937 City Directory for Houston has the same trio at the same address, but Joseph is working as a musician. His father was a porter. Brothers William, Jr. and Carlton and their wives are listed at other addresses in the city.

Pullum made a total of 30 recordings on Bluebird Records between April 1934 and February 1936; most were done in San Antonio. A vocalist, Pullum worked with two pianists on those sessions, Rob Cooper and Andy Boy. In the 1940's he moved to Los Angeles and recorded with another pianist, Lloyd Glenn, for Swing Time Records in 1948. Other than a rumored demo made in 1953, that was the end of Pullum's recording career.

Pullum appears in California voter registration records at two different addresses  in Los Angeles between 1946 until 1962. Wikipedia notes that although he died in Los Angeles, he was buried back in Houston. I was unable to find him listed in Find-A-Grave. All of his known recordings were reissued in 1995 on Document Records in two volumes available here and here.

His very first recording was "Black Gal What Makes Your Head So Hard?" on April 3, 1934, at the Texas Hotel in San Antonio. That number would become his most successful; he recorded several different versions including one titled "My Woman". The recording sold well and was covered by a number of other artists.

Pullum is one of numerous blues artists whose lives are poorly documented. Questions here include why did the Pullums leave Anniston for Houston? One source quoted by Wikipedia says Pullum performed on a Houston radio station in  the late 1930's, but that station was absorbed by another in August 1932. Did Pullum perform in public venues such as clubs and roadhouses? Why did he move to Los Angeles, did he perform live there and what did he do for a living until his 1964 death? Where in Houston is he buried?

Perhaps some day at least some of these questions will be answered....

You can find some of Pullum's recordings on YouTube. "Joe Louis Is the Man" is here. 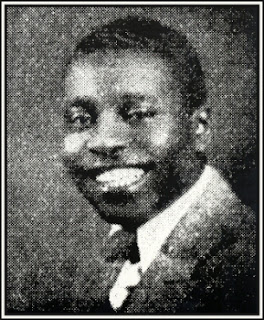 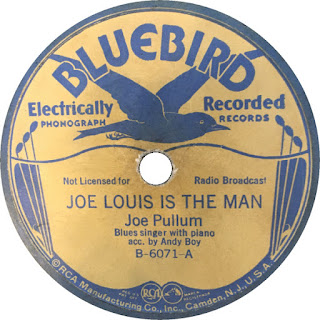 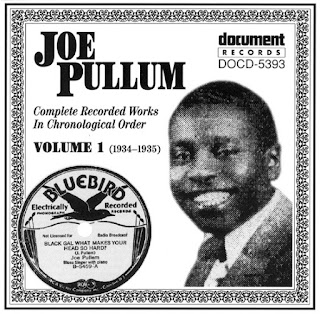 Pullum's entire recorded output was issued on two CDs in 1995 by Document Records; see links above. 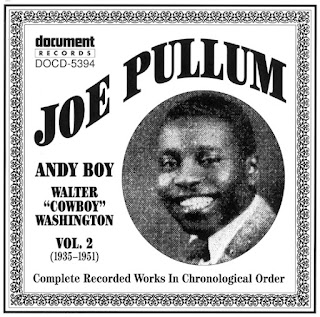 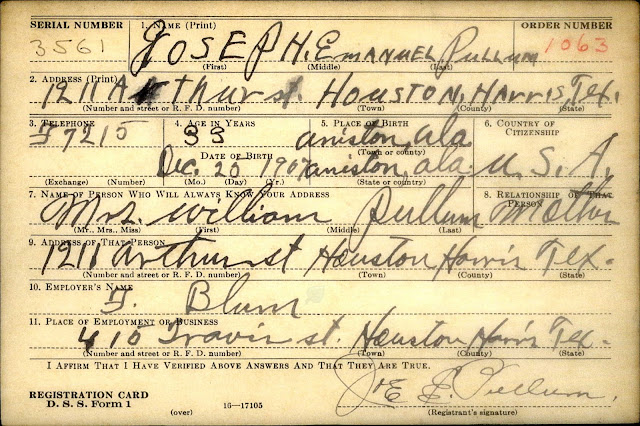 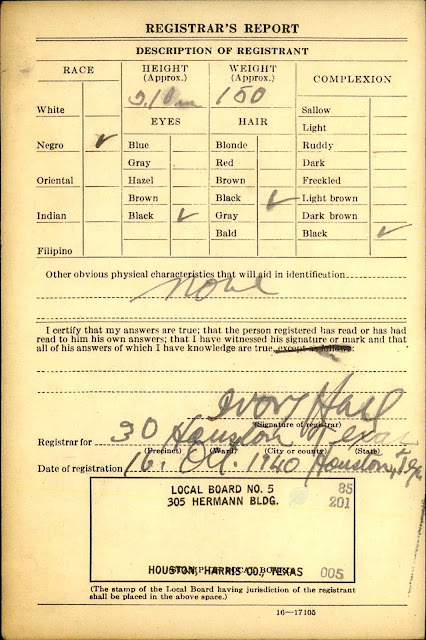 Posted by AlabamaYesterdays at 4:15 AM No comments:

Here's the latest batch of links to just-published Alabama history and culture articles. Most of these items are from newspapers, with others from magazines and TV and radio station websites. Some articles may be behind a paywall. Enjoy!

Copy Shop Near Auburn University Closes After 34 Years | Alabama News - USNews.com
U.S. News & World Report
“He became our loyal customer,” Solomon said. “We've printed his book before it was published so many times.” Behind the Glass owner Donna Young ...
Local medical student writes COVID-19 children's book: 'The Virus That Came to Town' - WRDW
WRDW-TV
Walters says plenty of friends, family, and children helped him pull off this book including an art teacher in Alabama who illustrates it. If you want ..
Lucille Times, civil rights figure who fought same driver of Rosa Parks bus, dies at 100 - Newsela
Newsela
Her role in fighting segregation in Alabama reflected a "remarkable, but undiscovered piece of history" that was unknown to many nationwide, said Troy King.
World War II sailor comes home to Alabama almost 80 years after death at Pearl Harbor ...
Stars and Stripes
Navy Fireman 2nd Class Ralph Curtis Battles, 25, was on board the USS Oklahoma Dec. 7, 1941, and for decades he's been buried as an unknown in the National ...
Posted by AlabamaYesterdays at 2:36 PM No comments:

For many years whenever my brother Richard and I are in Huntsville together visiting mom, we always try to make it by Booklegger Used Books. Our dad used to visit before his death in 2003; he probably introduced us to it. I've taken my son Amos at least once.

I have no idea about the history of the place, and have been unable to find any online. Booklegger may be one of the last bookstores in America with no email address, no web site, no Facebook page, no presence on Instagram or Twitter. They do have a telephone, however; you can call them at 256-895-0082. The store also has an address and zip code: 4001C Holmes Avenue in Huntsville, 35816.

Booklegger also has a vast collection of hardback and paperback books housed in three large rooms. Richard and I usually start at the new arrivals section and branch out from there. There are sizeable sections for Civil War and military history, which Richard spends some time in. I check out the Alabama books and then graze through the biographies, fiction, poetry and even the health section because sometimes an interesting medical history tome will turn up there.

More comments are below some of the photos. I highly recommend Booklegger where you can spend some quality time with many, many books you might want to purchase. I only wish I could get by there more often.

I've written several other posts about Alabama bookstores: one in Cullman formerly known as Deb's Bookstore, Books  Etc in Pelham which closed a few years ago, some long gone bookstores in Auburn and an adult bookstore that operated in Birmingham in the 1970's.

One day soon I'm going to get serious and do a batch of posts from materials I've collected over the years about Alabama bookstores. 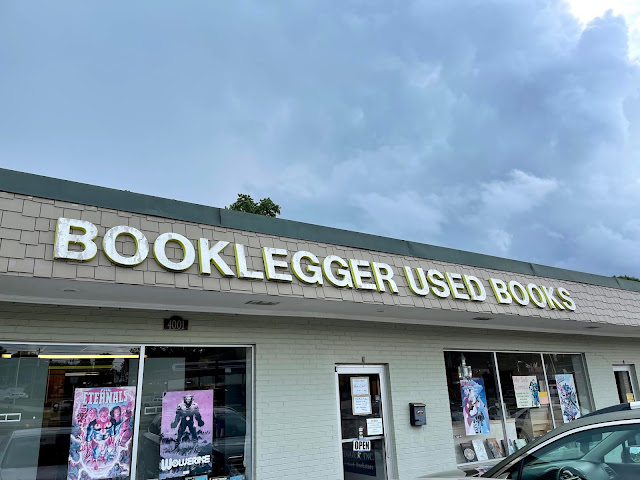 The Booklegger is located in a small retail strip at the corner of Holmes Avenue and Jordan Lane. Interestingly, the building that houses Infinity College Bookstore is right next door. 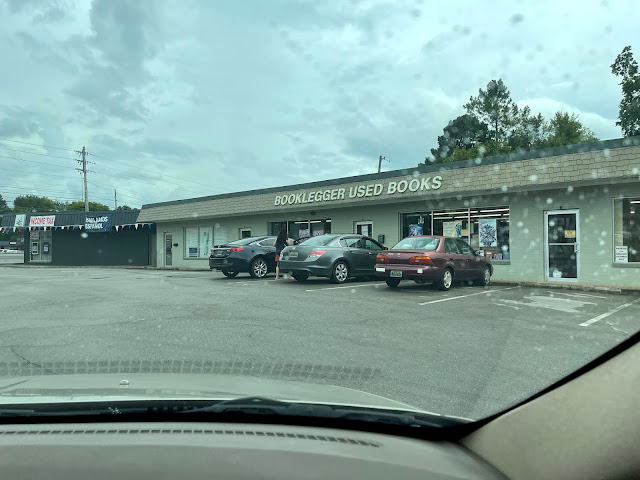 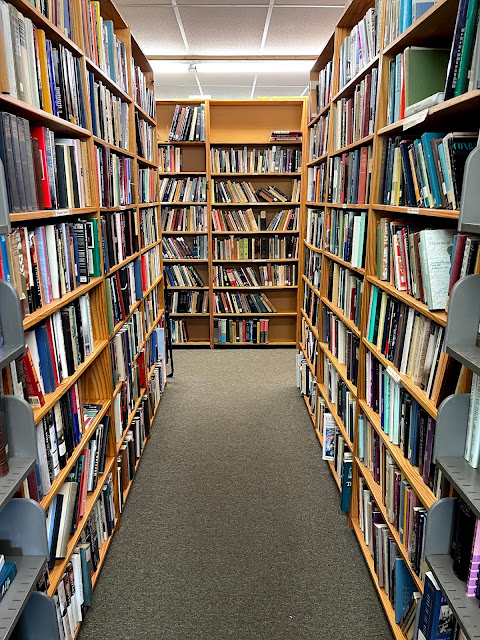 And here we are in some kind of nirvana. The photos below are all of different rows of books, or the same row from the other end. Yes, a veritable maze.... 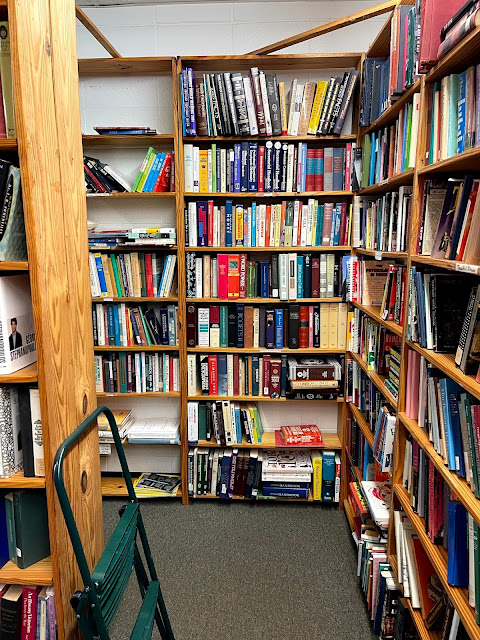 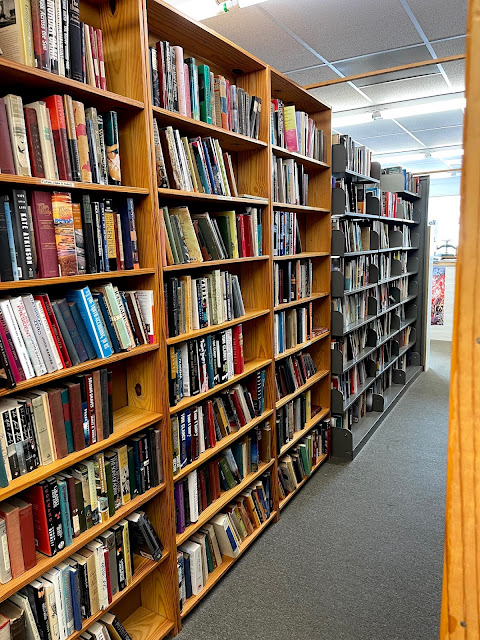 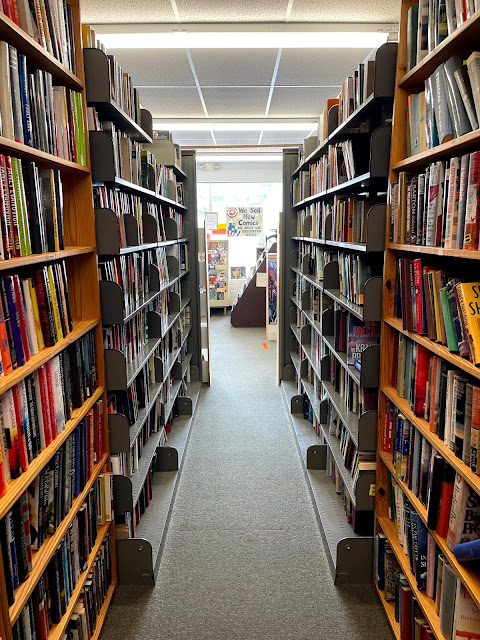 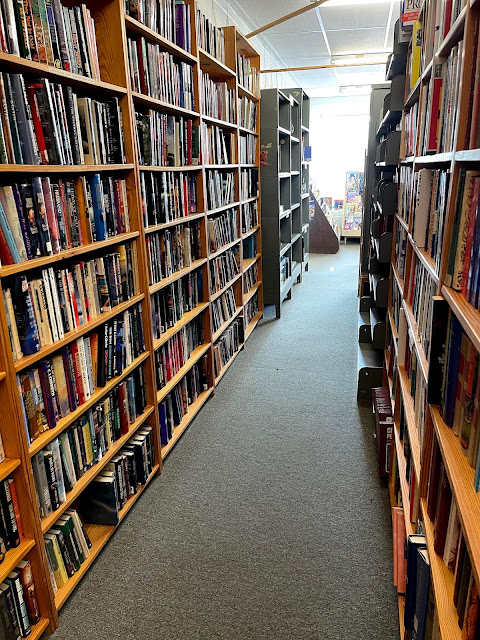 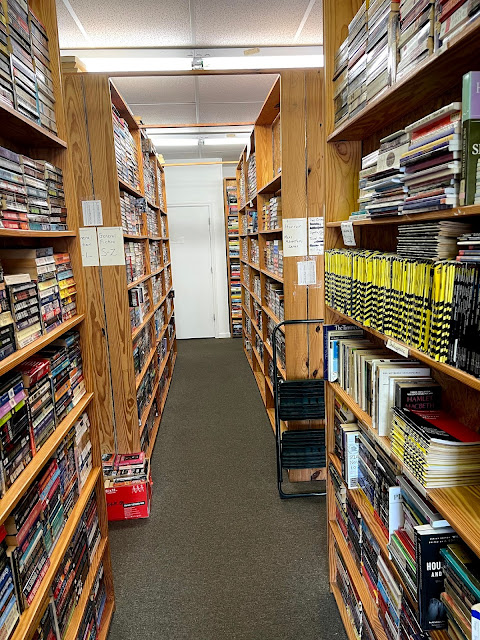 Ah, the familiar yellow and black covers of a few CliffsNotes! 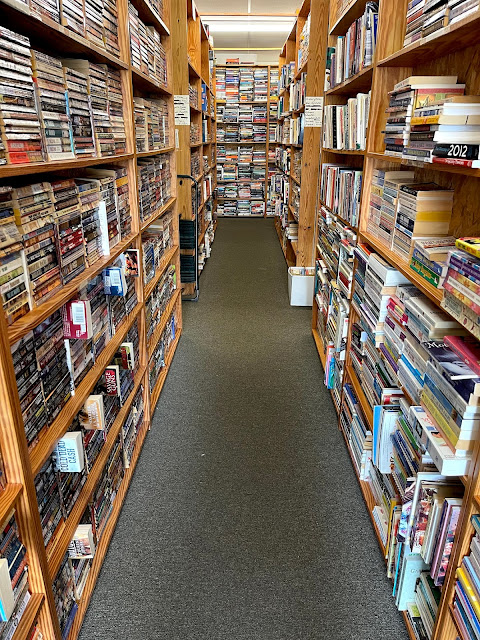 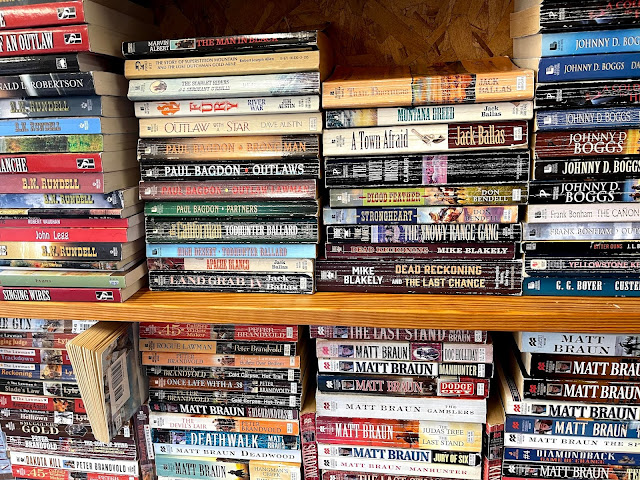 I like to read a western or two each year, and being out I hoped to pick up a couple at Booklegger this time. Unfortunately, I couldn't make up my mind...there is a good selection of paperbacks in the genre. The former Deb's Bookstore in Cullman linked above and now known as Camelot Books & Comics also has quite a few. 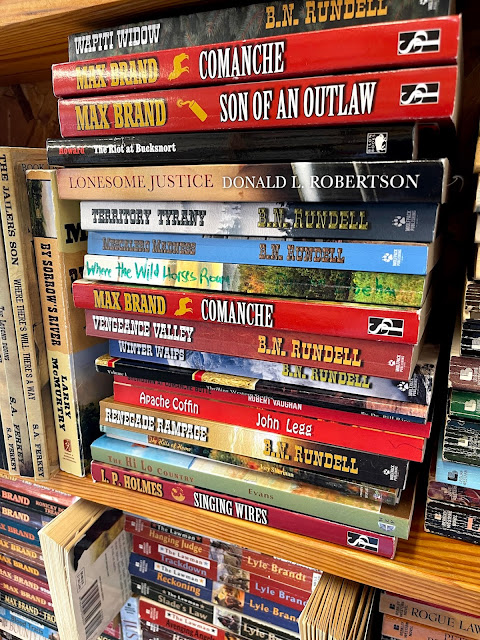 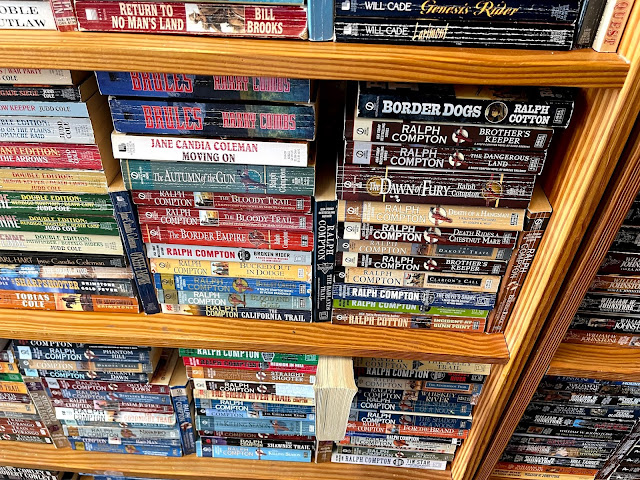 Notice a few Ralph Compton books on these shelves? Let's investigate.
Compton was born on April 11, 1934 in St. Clair County, Alabama; he died September 16, 1998, at the age of 64. Before his death he authored numerous popular western novels. As sometimes happens, his publisher Signet Books has continued issuing titles under his name by other authors. You can see the extensive lists of titles and other authors here and here. 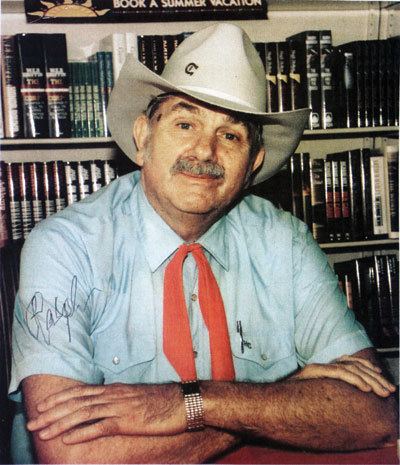 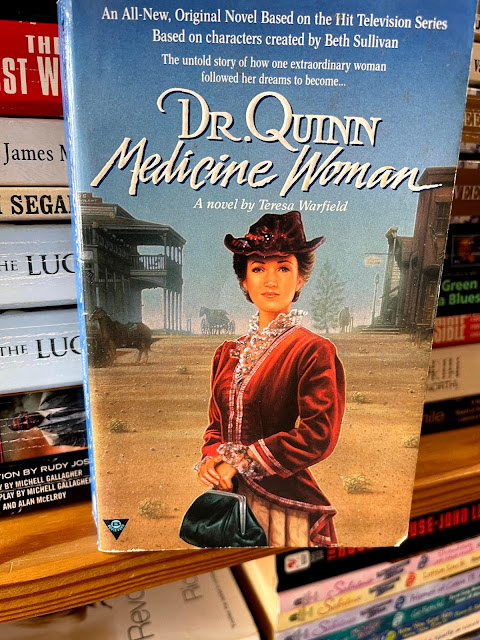 The store has a large selection of titles related to films and tv shows--either novels or non-fiction adapted or tie-ins based on particular films and shows. 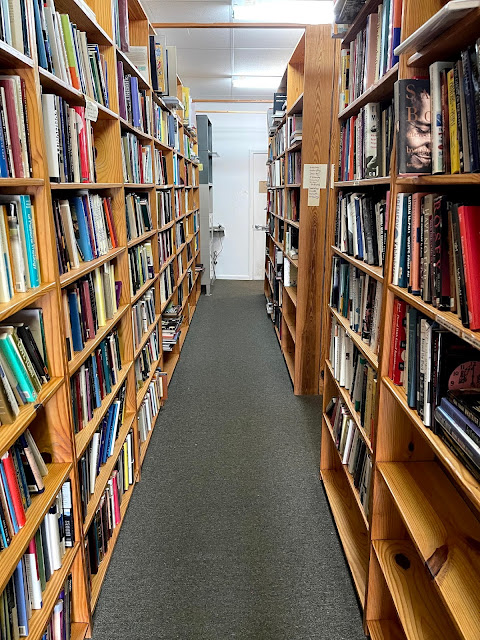 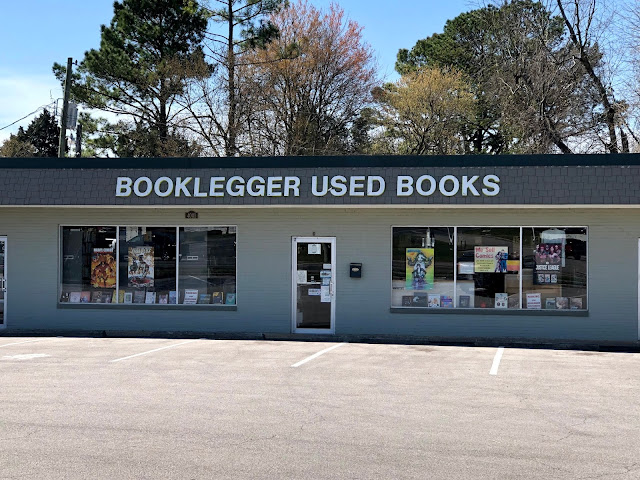 Posted by AlabamaYesterdays at 3:32 PM No comments:

Gail Patrick in "The Maltese Falcon"

For a long time I've been looking for an Alabama connection to the classic Humphry Bogart film The Maltese Falcon [1941]. Well, not real... 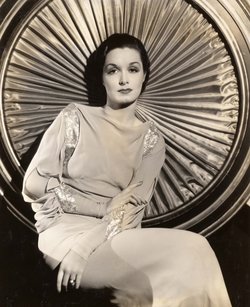