Between 1900 and 1916 grants for "Carnegie" libraries were awarded to 19 locations in Alabama. Let's investigate.

In 1880 businessman Andrew Carnegie began a philanthropic enterprise unlike few others in history--he gave cities money to build libraries. Lots of cities. Around the world. The first grants were given in his native Scotland and then his adopted home, Pittsburgh, Pennsylvania. That first one in Scotland opened in 1883 and the final one in 1929; in those decades more than 2500 libraries were built. Most were in the U.S. and Europe, but a few were in places like Australia, New Zealand, Malaysia and Fiji. Some 1681 of those libraries opened in the United States, a large percentage of the nation's libraries of 3500 by 1919. A study in 1992 found that 1554 of the original buildings in the U.S. still existed and over 900 were still being used as libraries.

The following images of Alabama's Carnegie libraries are in alphabetical order by city. All photos, postcards, etc. are via Alabama Mosaic unless otherwise noted. Some of these photographs [and others on the Alabama Mosaic site] have specific dates in November and December 1910. However, no photographer or source is given. Perhaps the Carnegie Institute had someone in the state documenting these structures. As noted below, only two of the original Carnegie libraries in Alabama still operate as libraries.

Two Alabama Carnegie libraries are not pictured. The Avondale library in Birmingham opened in 1908 and operated as a library until 1961. The one at Talladega College burned in 1963.

You can read some of my other posts on aspects of Alabama library history here. 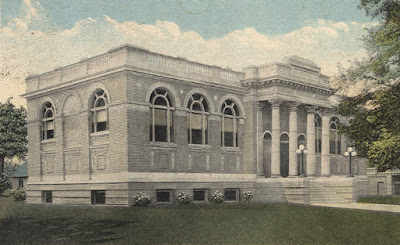 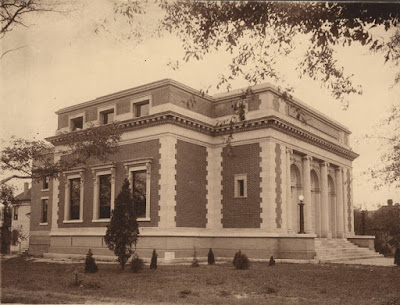 This Carnegie library was on the Alabama Polytechnic Institute campus in Auburn. The photograph was taken in October 1910; the library had been dedicated on December 2 of the previous year. The building is now Auburn University's Martin Hall and houses offices. 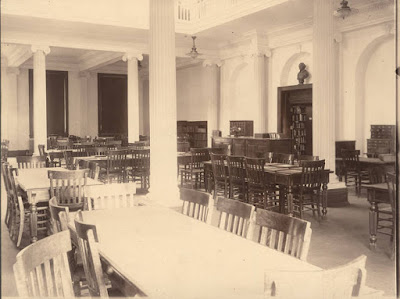 Photograph of the Bessemer library, probably 1940's. Now the Chamber of Commerce offices. 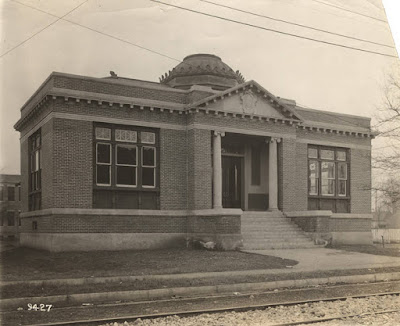 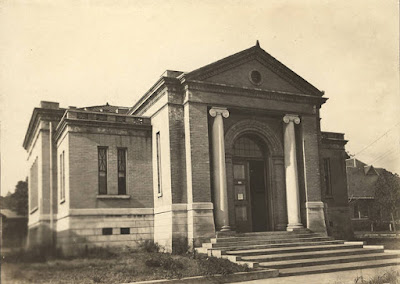 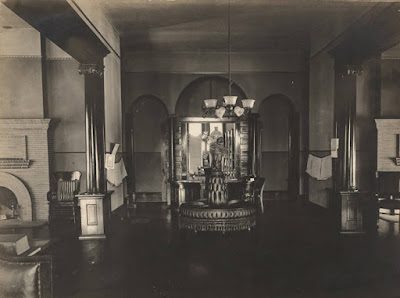 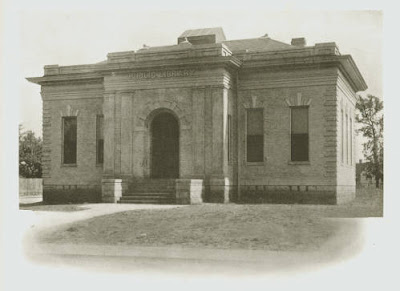 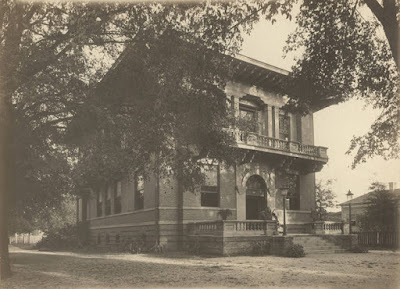 Eufaula library around 1910. This library and the one in Union Springs are the only two Carnegie structures in Alabama that are still operating as libraries. 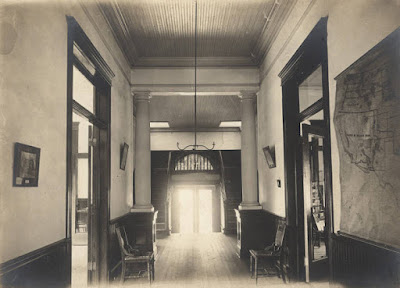 Interior of the Eufaula library around 1910 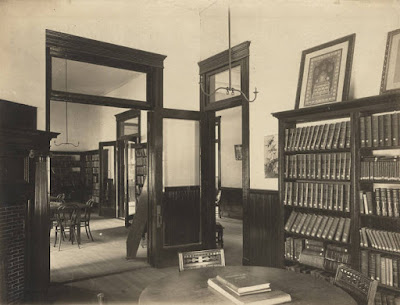 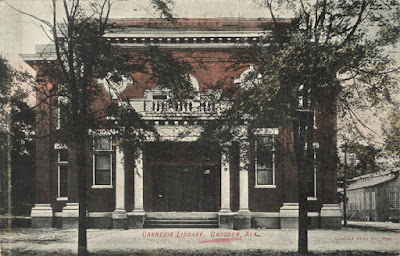 Postcard of the Carnegie library in Gadsden from the early 20th century. Operated as a library 1906-1955. 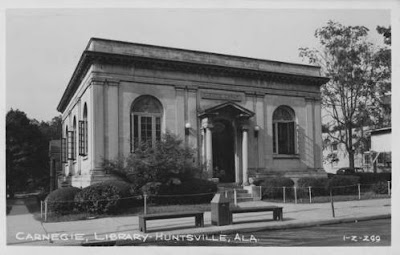 I remember going to this library as a boy; the children's section, known as the Longfellow Reading Room, was in the basement and can be seen below. No date is attached to this photo at the Alabama Mosaic site, but it would seem to predate my years there in the late 1950's-early 1960's. 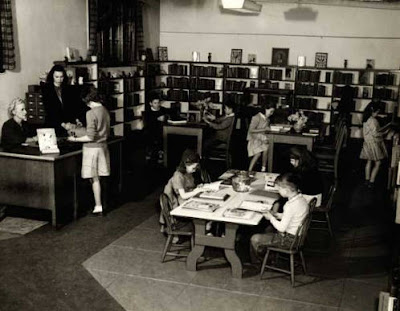 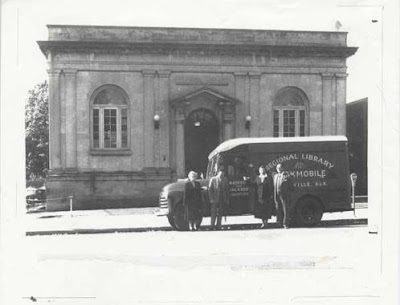 "Pictured in front of the bookmobile at the Huntsville Public Library when it was housed in the Carnegie building are board member Mrs. Claude Davis, council member James E. Davis, library director Elizabeth Parks Beamgaurd and County Commission Chairman Roy Stone." 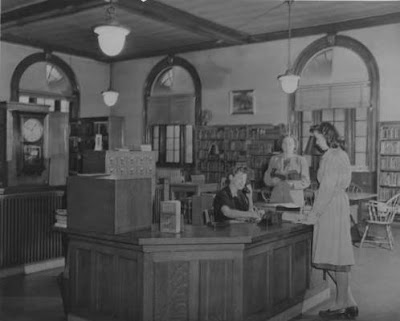 Circulation desk at the Carnegie library in Huntsville, date unknown

A gathering of presumably faculty and students outside the Carnegie library on the Alabama A&M campus near Huntsville, date unknown. 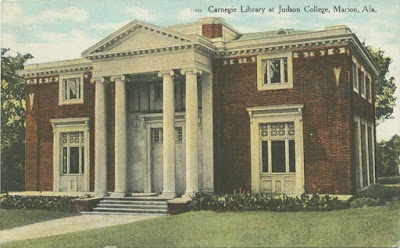 Postcard of the Carnegie library at Judson College in Marion before 1920. Now Bean Hall, which houses the Alabama Women's Hall of Fame. 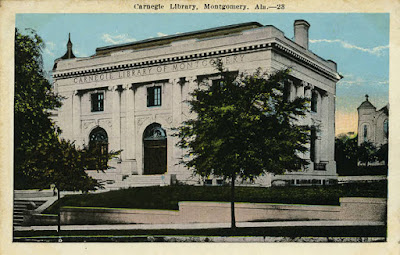 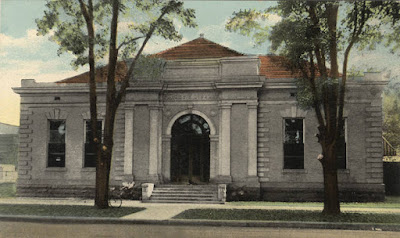 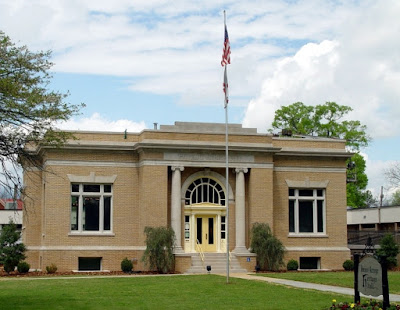 "Mrs. Lou McElderry Jemison donated the land and $10,000 towards building Talladega's Public Library in 1906. Robert S. West was the contractor who built the library. It served as the main library until a new library was constructed directly behind this one in the 1970's. This example of a Jemison-Carnegie library is one of only four remaining Carnegie-affiliated buildings in Alabama. The building now serves as the home to the Heritage Hall Museum for local history and the arts." 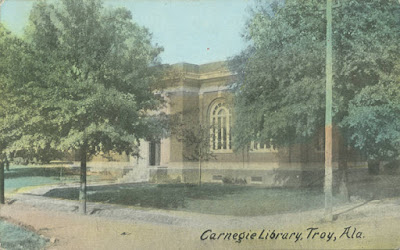 This card of the Troy library is postmarked February 26, 1911 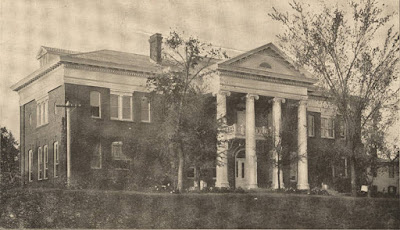 The Tuskegee Institute library on November 29, 1910. The building operated as a library from 1901-1932, and now houses offices. 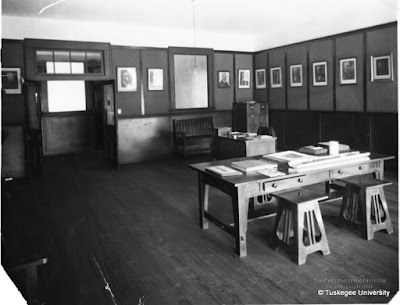 Inside the Carnegie library at Tuskegee Institute early 20th century 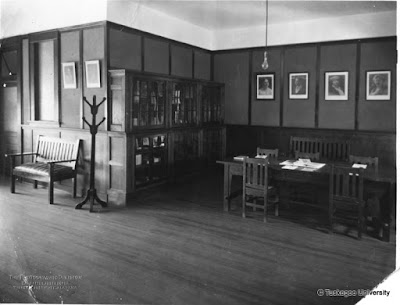 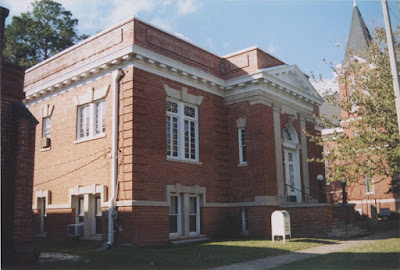 Union Springs Carnegie library around 2000. This library and the one in Eufaula are the only two Carnegie structures in Alabama still operating as libraries.


In library school at UA I wrote a paper on the formation of this library; a major primary source was the local newspaper. My work is available here.

Carnegie Comes to Union Springs. The Development of an Alabama Public Library. A Research Proposal
This proposal examines the formation of the Carnegie Library at Union Springs, Alabama, in the context of the rural society from which it grew. It is suggested that the availability of detailed research into the dynamics of this library's formation may help historians identify factors that support the advent of public libraries, regardless of their locations, and may assist the library profession to better articulate methods to help floundering public libraries. It is proposed that several independent variables be examined in varying depth, including: (1) the confluence of Carnegie's philanthropy with the local philanthropic impulse and civic pride; (2) local leadership from elected officials, library association members, and community leaders; (3) the presence of supporters of the local subscription library and their backgrounds; (4) the presence of enough wealth in the county to support Carnegie's matching funds requirement; (5) the backing of the local newspaper; (6) the influence of populism; and (7) the presence of general cultural factors--e.g., the public library movement throughout the southeast, the growth of public education, and the relative lack of racial and political turmoil. (22 references)