Arthur Kellogg Akers was a prolific author of short stories who lived in Birmingham during the 1920's and 1930's. I first came across him while doing research for a recent post on the Federal Theatre Project in Alabama during the 1930's. Let's investigate.

Akers was born in Richmond, Kentucky, on November 6, 1886. His parents James and Clara Akers were both born in Virginia and died in Kentucky in 1901 and 1929 respectively. Arthur was the first born of five siblings; he had two brothers and two sisters.

Akers' draft registration cards for World War I and II tell us a great deal about him; you can see images below. We learn that he registered June 5, 1917, for the First World War draft. At the time he was living at 406 West Addison in Richmond, Virginia. He worked as manager for the Postal Telegraph Cable Company located at 1216 East Main. Akers described himself as medium height and build with gray eyes and light brown hair. He had a wife and one child. The form asked if he claimed any exemption from service, and he did--"in telegraph business".

The World War II registration card has additional information. Akers registered at local draft board 244 in Queens, New York, on April 25, 1942. The family was living at 206 Burns Street in Forest Hills, New York. Akers' employer was Public Works magazine at 310 East 45th Street in New York City. Akers listed his height as 5'8" and his weight as 145 lbs. He had a tattoo on his left wrist.

The 1940 U.S. Census tells us the Akers family was living at the same Burns Street address in Queens. Two additional children were in the household, John, 15, and Nancy 13. By this time Arthur Jr. was 23 and that October registered for the draft in Birmingham, giving his address as 1432 South 18th Street. Apparently his parents and siblings had moved to New York from Birmingham, and perhaps there was some falling out with his parents. On the draft card he listed an aunt in North Carolina as the "Name of Person Who Will Always Know Your Address." Born in Richmond, Virginia, on February 8, 1917, Arthur Jr. died June 24, 1996.

Akers began publishing short stories long before he moved to Birmingham. According to the FictionMags Index, several appeared between 1909 and 1914, then a gap with few publications until many during the 1925-1935 decade. The earliest two are "Buffalo Mountain Tunnel" in McClure's September 1909 and "As the Dispatcher Told It" in Pearson's Magazine July 1910. One source [the book by Drew cited below] states that some of Akers' fiction was serialized in newspapers but gives no examples.

During that decade of Akers' prolific output, he and his family were located in Birmingham. I found an entry for him and wife Nancy in the 1920 city directory. They were living at 1625 South 13th Street. I also found this house at that address on Google Maps, which certainly looks like it has survived from his time in the city. Akers occupation was listed as state representative for the Alexander Hamilton Institute, an organization dedicated to business education opened in 1909 and dissolved in the 1980's. Their 1921 publication Forging Ahead in Business describes the Institute and its course of instruction.

Akers and his wife and children appear in the 1930 U.S. Census. He was 43 years and Nancy was 31. Son Arthur was 13, John was five and daughter Nancy was three. A 20 year-old woman named Mary Ellis Spotts was a ward of the "head of household", i.e., Akers. The family lived at 307 English Circle in Homewood; here's the Google Map photo. Akers gave his occupation as self-employed writer.

Finally, there is a listing in the 1935 Birmingham city directory, on page 32, which I found at Ancestry.com Akers and wife were living at 1434 South 18th Street; son Arthur was listed as a student. On Google Maps that address defaults to 1434 19th Street South, so the address of their house may have changed. According to this listing Akers was Secretary of the Rotary Club of Birmingham.

Akers was not the only prolific author in Birmingham during the 1920's and 1930's; Octavus Roy Cohen was another. You can read an overview of Cohen's life and writing at the Encyclopedia of Alabama. During his career he produced an enormous number of novels and short stories, many of which featured three different detectives. The first one was David Carroll in four early novels, such as The Crimson Alibi (1919). Then a shabby, obese, folksy detective named Jim Hanvey is featured in three novels and numerous short stories. Cohen's third and most problematic creation was Florian Slappey, an early black private investigator who moved in upper class African-American society in Birmingham. The stories were very popular; many were published in the Saturday Evening Post and then various collections. Unfortunately, these tales are full of stereotypical black characters, behavior and language that aroused complaints at the time. Essays dealing with Cohen's troubled legacy can be found here and here.

Akers created a similar, equally problematic series about Bugwine Breck, the "Human Bloodhound" a detective character in the "Darktown" stories. Most of Akers' stories are apparently a part of this series according to the FictionMags Index linked earlier. They were published frequently in Blue Book and Redbook magazines. The stories are discussed in Bernard A. Drew, Black Stereotypes in Popular Series Fiction, 1851-1955: Jim Crow Era Authors and Their Characters [2015]; Akers is included on pages 179-183. Cohen's Florian Slappey is also included in this book.

In the 1940's and 1950's Cohen made a transition away from his black stereotypes and wrote numerous crime thrillers such as My Love Wears Black (1948) and The Corpse That Walked (1951). Many were published as paperback originals. Akers made no such change; he seems to have abandoned fiction.

Since both men were living and writing in Birmingham during the 1920's and 1930's, did they ever meet? There are two possible connections. As noted above Akers worked as Secretary at the Rotary Club during some period while he lived in the city. Cohen was a prominent member of that organization during the 1920's and 1930's. According to an early history of the club, Cohen left the city in 1935 for Hollywood.

Cohen was also a member of a group known as the Loafers, a loose confederation of writers in the city. Some such as Jack Bethea and James Saxon Childers became well-known also. John W. Bloomer's article "'The Loafers' in Birmingham in the Twenties" [Alabama Review April 1977, pp 101-108] details many writers associated with the group but Akers is not mentioned. The creative writing community in Birmingham at the time surely wasn't very large, so perhaps they encountered each other that way even if Akers didn't make the historical records.

By 1940 the Akers family appears in the U.S. Census as living in Queens, New York. He and Nancy were living with son John, 15, and daughter Nancy, 13. Their address was 206 Burns Street; you can see it here on Google Maps from 2007. In that census Akers described himself as a salesman in the advertising industry.

I've located a few others bits about Akers. I found an interesting note in the spring 1958 issue of the Willa Cather Pioneer Memorial, a newsletter devoted to the author and published in Red Cloud, Nebraska. "Arthur Kellogg Akers, Forest Hills, Long Island, our traveling member, sent us greetings most recently from Bermuda. He hopes to visit here again next September." The National Willa Cather Center has operated in Red Cloud since 1955. I have no idea what Akers' connection was to Cather. In searching for him at Ancestry.com, I found a passenger ship manifest that listed him in the voyage to Hamilton, Bermuda, in late February 1961, so perhaps he went often.

A couple of other Rotary Club references turned up. A letter from Akers was published in the October 1969 issue of The Rotarian, the organization's monthly magazine. In it he thanks the editor for publishing a particular article and signs himself "Rotarian, formerly printing and publishing, Gulfport, Mississippi." What he meant by that and why and how long he had been in Gulfport is unknown. Perhaps by that time Akers was retired and had a vacation home in Gulfport. In the July 1972 issue Akers published an article "Meet Roy Hickman: Work Made the Man." Hickman, whom Akers had known in Birmingham, became the 62nd President of Rotary International. The author note [with photo!] is shown below, indicating Akers was living in Gulfport in 1972.

In the catalog of the Birmingham Public Library, I found this record:

Akers, Arthur K.
Typescript, 1929 and 1934
AR1887
Arthur K. Akers was a Birmingham resident and writer who published more than 30 short stories in various magazines, including The Saturday Evening Post and Redbook. This collection contains typescripts with some handwritten notes for two Akers stories, “Business and Domestic Entanglements” and “Recovery, Here We Come” (published in Redbook, March 1934). These are comic stories typical of the era, employing characters that are caricatures of African American Southerners and exaggerated black dialect.
Size : ¼ linear foot (1 box)
According to the U.S. Social Security Death Index, 1935-2014, Akers died in October 1980. His last residence was given in Morris, New Jersey. I did not locate a Find-A-Grave listing for him or a specific death date. His son Arthur Jr. died in 1996; I didn't find death dates for his wife or other children.
Well, that's the sum of my investigation so far into Arthur Kellogg Akers. He seems to have been a prolific author from 1909 until the late 1930's, and then moved on to something else. A bit more commentary is below. 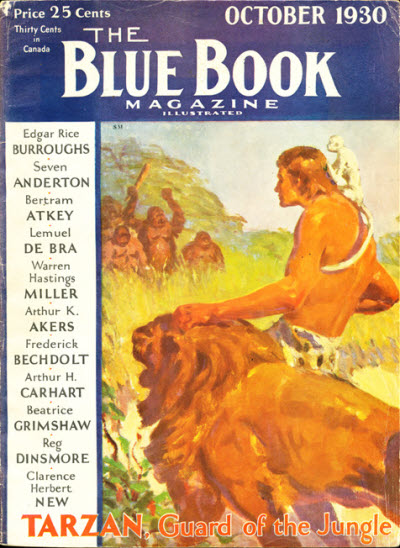 This issue includes "You Can’t Argue with the Evidence" one of the Darktown stories. 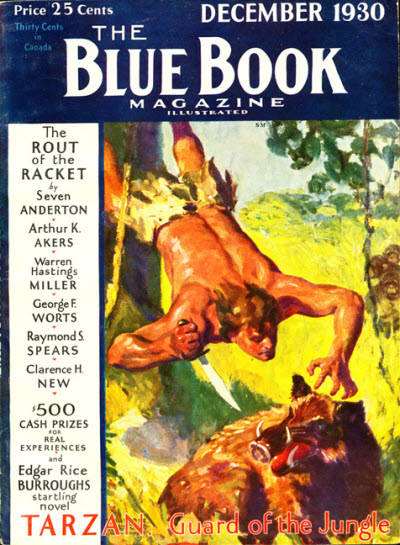 Akers' story in this issue is "Baptist Hill's Dog Derby" 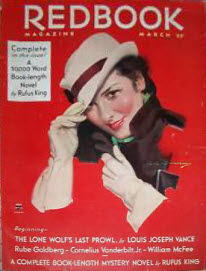 Both Cohen and Akers have a story in this March 1934 issue. 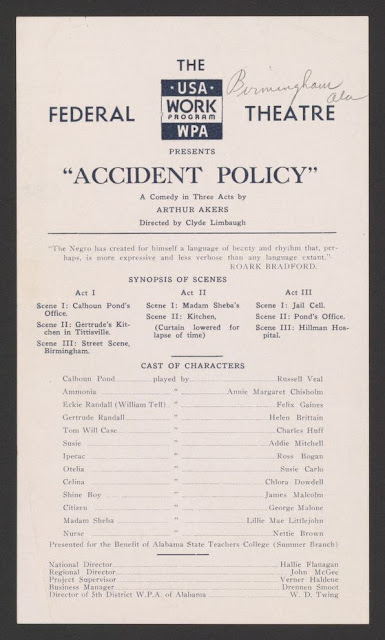 Akers' comedic play was produced in Birmingham in April 1936 under the auspices of the Federal Theatre Project. I've written about that project here. 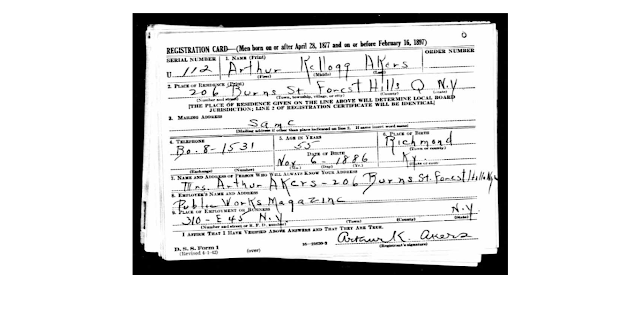 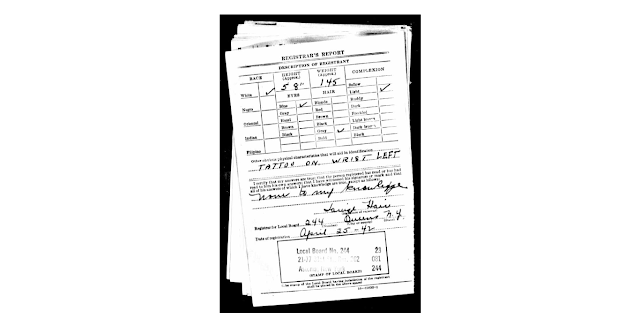 Posted by AlabamaYesterdays at 3:10 PM 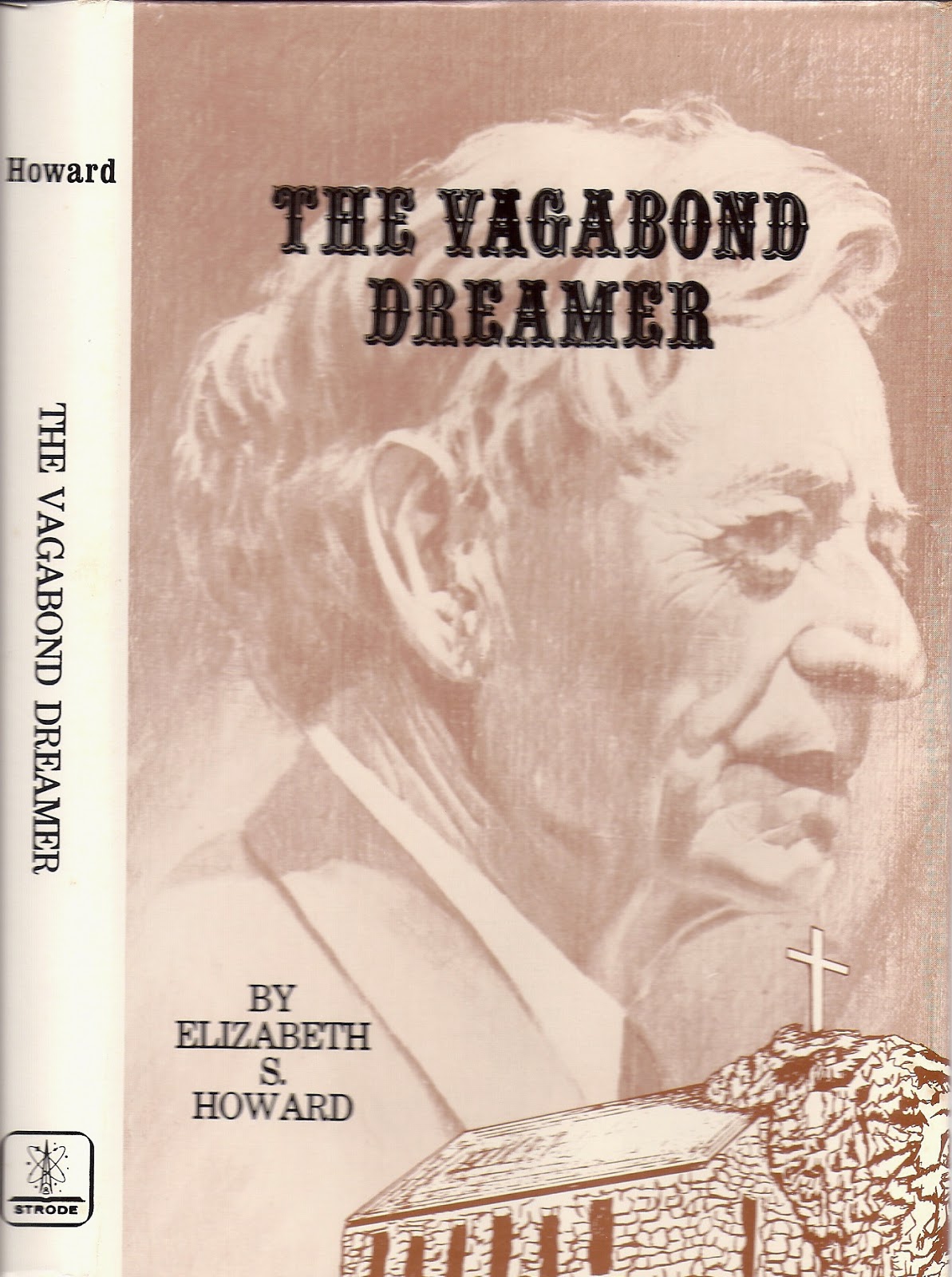