In 1870 Congress had established a weather service under the U.S. Army Signal Corps. In 1890 the service moved to the civilian Department of Agriculture and to the Commerce Department in 1940. Today the National Weather Service is part of the National Oceanic and Atmospheric Administration.

Official weather observations began in April, 1882, in the Birmingham area, just a few years after the city was founded. Until September 14, 1895, records were not continuous, done in cooperation with railroads such as L&N and often used volunteers. At this time the office was located in the Walker and Jordan Building on First Avenue North; instruments were on the roof of the building.

A full-time facility began operation in July 1903, and the office and instruments were moved to the Title Guarantee Building at 21st Street and 3rd Avenue North. The first official Weather Bureau observation was made at 8:00 a.m. on September 1. W.A. Mitchell noted that "The day began clear and unusually cool...Maximum temperature for the day was 79.0 degrees. Fresh north wind." By January 1904 the station was recording a storm that turned out to be tornadoes with damage about a mile north of the station.

In 1907 a building for the service was constructed at the corner of 12th Avenue [then Alta or Elta] and 13th Street on a hill north of downtown. The service remained in this building until December 1, 1945, when Weather Bureau activities were consolidated at the Birmingham airport.

A history of the National Weather Service in Birmingham is available here. 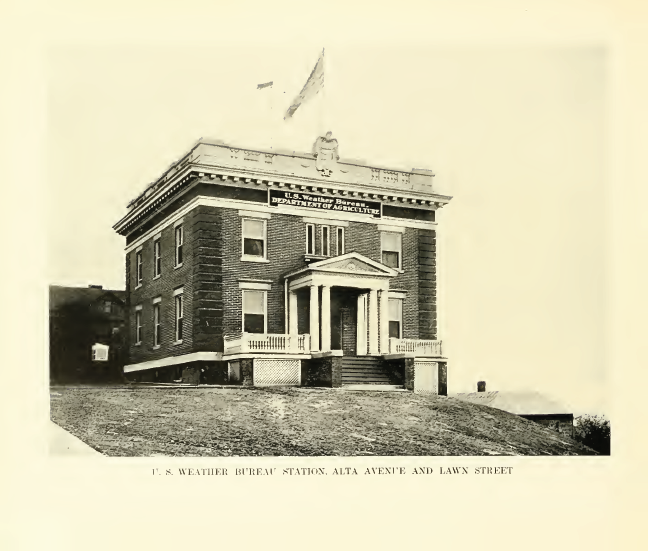 U.S. Weather Bureau Station
From the book Views of Birmingham, Alabama published in 1908


Posted by AlabamaYesterdays at 8:21 AM