In the first half of the 20th century Birmingham was home to several soft drink companies bottling such exotic drinks as Gay-Ola, Rye-Ola and Wiseola. At his Kola Wars site noted below, researcher Dennis Smith declares, “No city in the country had the number of brand name and proprietary soft drinks that were produced in the city of Birmingham prior to 1920.” With the help of the BhamWiki and Antique-Bottles.net web sites, I’d like to bring together some information on a few of these companies and their products.


Bottled drinks appeared in Alabama soon after the Civil War.  “Red Sulphur Water” was sold in blue bottles in the 1870s by the Blount Springs Natural Sulphur Water Bottling Company. The firm operated at the mineral springs resort north of Birmingham; the product was sold to guests and passengers on the resort’s trains. Bottles were also shipped elsewhere in Alabama and into Tennessee as well.


An early Birmingham soft drink drink formula, Celery-Cola, was developed by businessman James Mayfield in 1887. Beginning in the 1880s Mayfield partnered with John Pemberton, the patent medicine inventor whose products included Coca-Cola. He also worked as general manager for T.J. Eady’s real estate, banking and manufacturing businesses as well as the Wine Coca Company. Mayfield later developed oil wells in Kentucky and Tennessee and opened offices to sell drink syrup rights to bottlers all over the United States, Cuba and South America until the Great Depression killed his final efforts in that field. 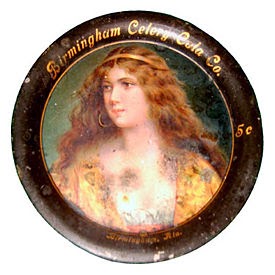 In 1899 Mayfield and a partner opened J.C. Mayfield Manufacturing Company on Morris Avenue and the Celery-Cola Company operated from there until 1910. In 1906 Congress passed the first consumer legislation, the Pure Food and Drug Act, which allowed the federal government to require product labels giving ingredients and amounts. Unfortunately, Mayfield’s Celery-Cola contained high levels of caffeine and cocaine, two of the substances the government could regulate. The Pure Food and Drug Administration took Mayfield to court and won; he had to close the business. In 1911, however, he was in St. Louis operating as the Koke Company; Coca-Cola sued for trademark infringement and finally won a U.S. Supreme Court decision in 1920. He continued marketing other drinks from St. Louis into the 1930s.


Another local chemist and drink entrepreneur was Jefferson J. Peek and his Peek Beverage Company.  He opened his company in 1905; his offices were in the original Watt Building downtown with a bottling operation next door.  The 1910 U.S. Census shows Peek living on 28th Street with his wife Mary and two sons. His occupation is listed as “manufacturer Kola syrup.” Peek created such brands as Rye-Ola, Wiseola and Nervola before selling the firm in 1918. The new owners had to close the business, by then located in Southside, in 1922. 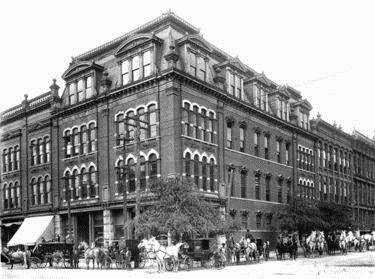 
The National Dope Company produced and bottled soft drinks in Birmingham from 1909 to 1911. “Dope” was a slang term for carbonated soft drinks with cola syrup that seems to have been used primarily in the southern U.S. into the 1950s. 
Other local soft drinks in this time period included Ozo-Olo and Gay-Ola. Both drinks were among the many Coca-Cola imitators of the day. Gay-Ola was sold by J.C. Wells’ Gleeola Company, which opened on 18th Street South in 1910. By June of the following year the company was producing 40,000 gallons of syrup a month and expanding aggressively as far as Florida, Texas and California. Lawsuits eventually won by Coca-Cola forced the company to make changes, but a version of the drink remained on the market into the 1920s.

In 1938 local businessman A.G. Gaston founded the Brown Belle Bottling Company and created such drinks as Joe Louis Punch and Brown Bell Boogie. The firm operated until 1950, but had trouble finding sales outlets and mounting debts. Gaston finally paid those debts himself.


All images are from BhamWiki.com unless otherwise noted.


Posted by AlabamaYesterdays at 9:54 AM