Bookmarks for Some Alabama Bookstores

This post displays a few items from my modest collection of bookmarks related to Alabama bookstores. I'll make a few comments along the way and intend to offer other selections in a future post or two featuring bookmarks for libraries and more.

First up are four different bookmarks from a Birmingham store thankfully still in operation, the wonderful establishment of Jim Reed. The first bookmark notes the store's current location on Third Avenue North; the other three date from the previous location on 1st Avenue South where 20th and 21st anniversaries were celebrated.

I can recommend this store to anyone with the least interest in any kind of printed book. But others may enjoy it as well, since the shelves are filled with items beyond books--magazines, toys, and many other goodies from days gone by. Those of us lamenting the passage of print culture down the great digital black hole can renew our spirits here. 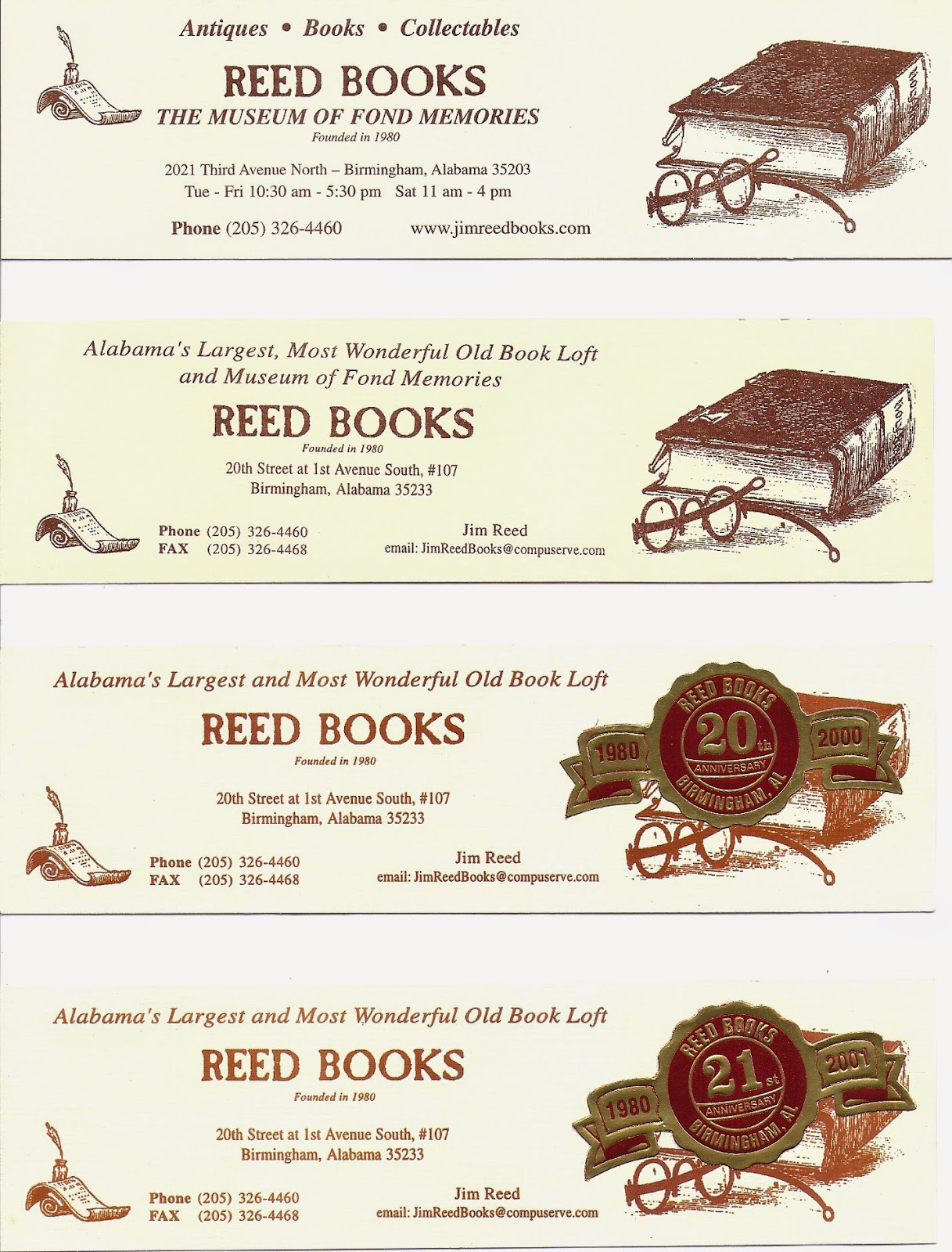 The bookmarks below represent stores once thriving but no longer with us.

Shaver's was a very nice bookstore located near Huntsville Hospital. The store carried a combination of new and used titles and had a great selection of books related to Huntsville and Alabama history and culture. A profile of owner John Shaver and a photo inside the store can be found here. My brother and I always enjoyed a visit when we were in town and bought many books here over the years. Shaver's closed several years ago, and I believe he opened a booth in a local antique mall.

I assume the bookmark below relates to the downtown Birmingham Loveman's store and is a reminder of how far books could penetrate our mass market culture back in the day. In addition to bookstores, book selections could be found at department stores and drug stores. The book racks in places like Wal-Mart and Target and some larger grocery chains such as Publix are the last vestiges and will probably disappear soon as well.

This bookmark and business card advertise A Good Bookstore, which was a Huntsville institution for many years. The address given is the courthouse square downtown, the second location that I really don't remember ever visiting. I did go many times when the store was located in a small strip of stores just outside the Five Points Historic District where California Avenue becomes Andrew Jackson Way. The place was a beacon of culture in the late sixties for several friends and myself. 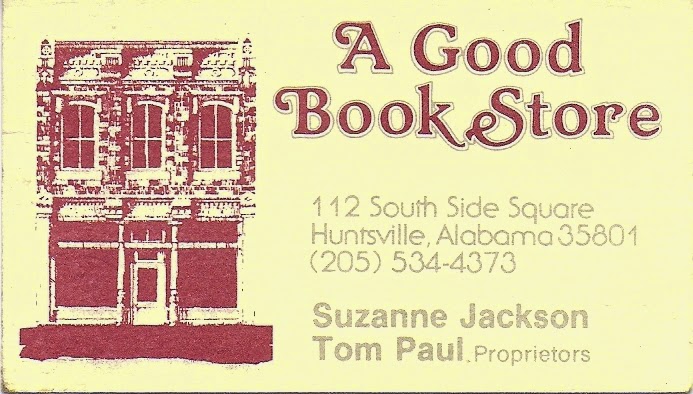 The final three bookmarks are from two locations of one of Birmingham's legendary bookstores, Smith & Hardwick founded in 1934. The first item shows the North 20th Street address; the other two are the Clairmont Avenue address in Forest Park, across the street from the Silvertron Cafe. I visited that location a couple of times before the store closed a few years ago. Allen Dean Shaffer was one of the final owners; he died in 2012. He had retired as owner following a stroke in 2004. Shaffer had moved the store to Forest Park in 1990.

One thing we can conclude from these few samples is that many bookstores across the country must have ordered their bookmarks from the same source!

An article about another legendary Huntsville bookstore, Books as Seeds, can be found here.

A history of Birmingham bookstores is available here.

Bookmark histories can be found here and here.

Some interesting things booksellers have found in used books are described here.

Posted by AlabamaYesterdays at 5:02 AM