This statue is found to your left as you start up the front entrance steps of the New Hillman building on the UAB campus. You can find out more about the building in an earlier blog post. The man depicted is William Elias Brownlee Davis [1863-1903], described in the subtitle of an article about him as "surgeon--teacher--organizer." Davis was one of Alabama's most prominent 19th century physicians.

Born in Trussville, William and his older brother John formed a third generation of doctors in the family. Grandfather Dr. Daniel Elias Davis was an early settler in Alabama; their father, Dr. Elias Davis, was killed at the Battle of Petersburg during the Civil War.

John Daniel Sinkler Davis graduated from the Medical College of Georgia in 1879, and when he set up practice in Birmingham two years later invited his sibling to come "read" medicine under him. William studied at the University of Alabama, medicine at Vanderbilt and the University of Louisville and graduated from Bellvue Hospital Medical College in New York City in 1884. Then the Davis brothers began a joint practice in Birmingham.


The brothers were nothing if not ambitious. Within a decade they had started the Alabama Medical and Surgical Journal, founded the Birmingham Medical College where experimental surgery on dogs was included in the curriculum, and opened a private clinic for surgery and gynecology on Third Avenue. The brothers also helped organize the Southern Surgical and Gynecological Association at a meeting in October 1887 held in the local YMCA. The organization still exists today as the Southern Surgical Association.

Originally located on 21st Street North in a former hotel, a new building for the Birmingham Medical College was constructed in 1902 in the same block where this statue now stands. A two-story autopsy house was added later. The college graduated its final class in May, 1915. Graduates from the school included one woman, Elizabeth White. Clinical training took place at Hillman Hospital, St. Vincent's Hospital, and other city facilities including the Davis Infirmary.

He was killed at a railroad crossing in the city when he was only 40 years old. His wife Gertrude lived until June 1953; both are buried in Oak Hill Cemetery.

This bronze sculpture is the work of Giuseppe Moretti and was cast at his Roman Bronze Works in New York in 1904. The work was commissioned by members of the Southern Surgical and Gynecological Association. Moretti's slightly larger cast-iron statue of Vulcan debuted that same year at the St. Louis Exposition. 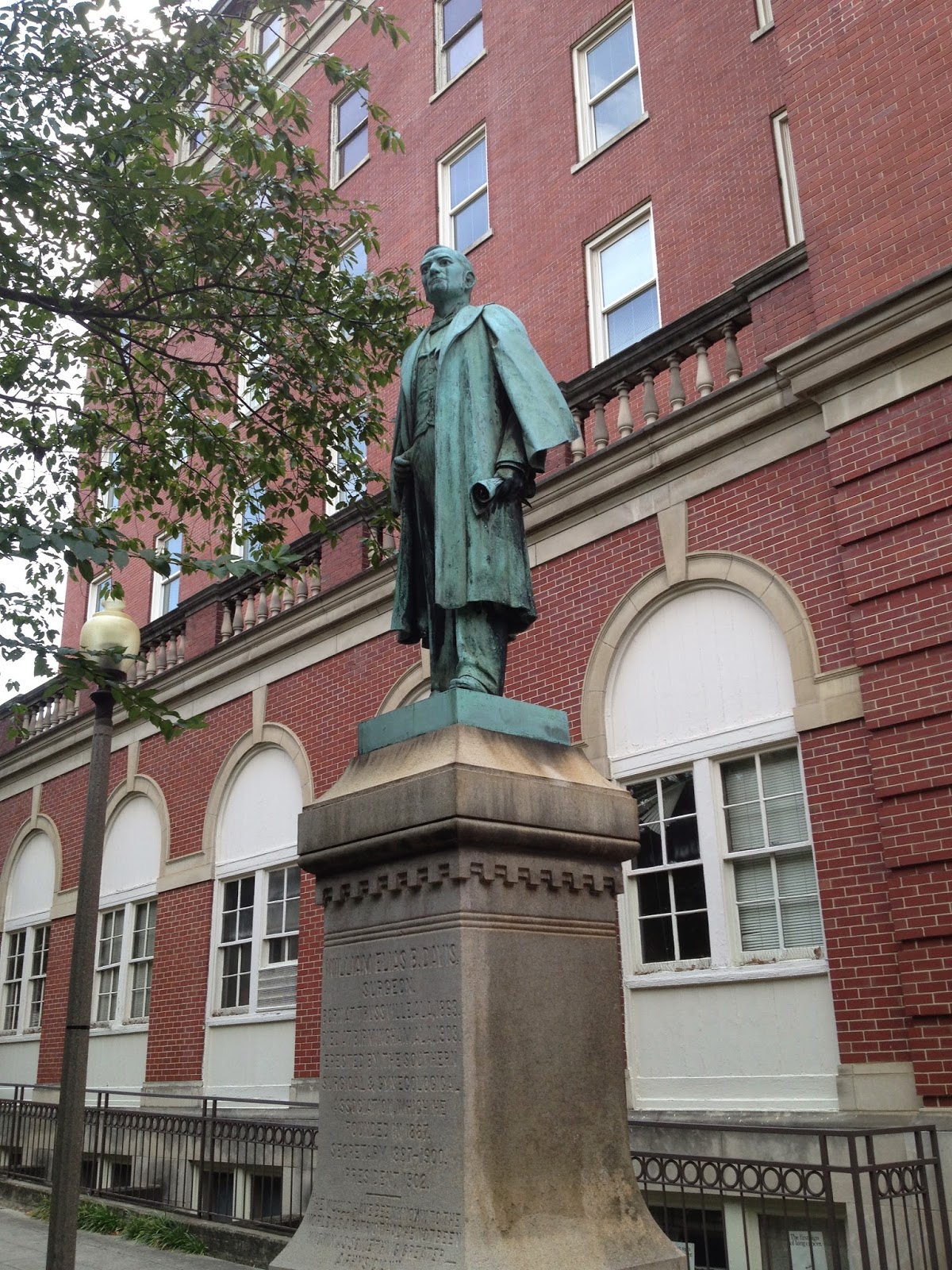 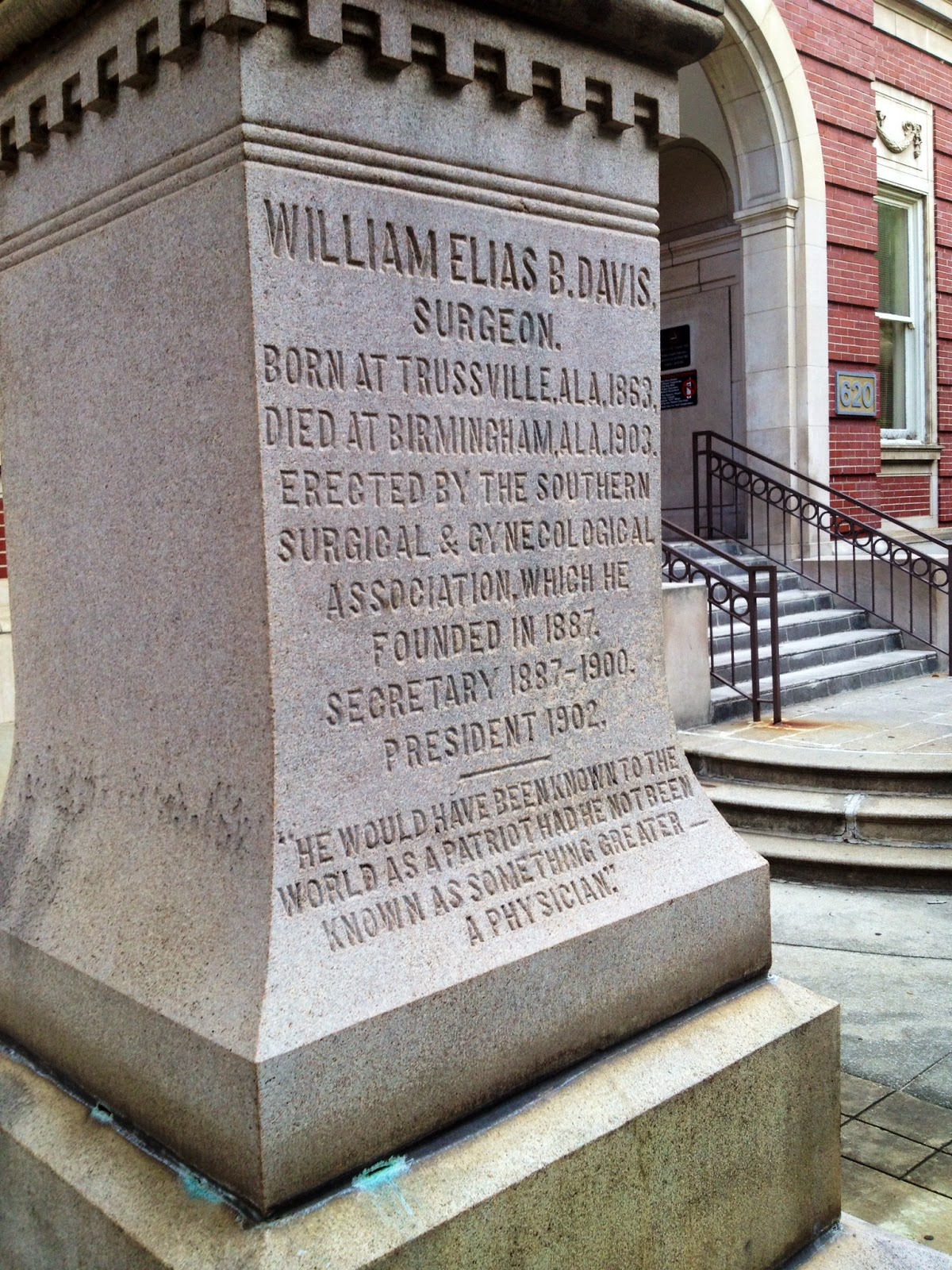 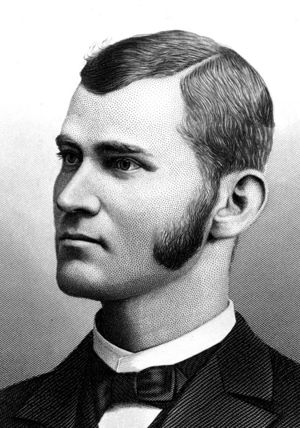 Moore RM. The Davis Brothers of Birmingham and the Southern Surgical and Gynecological Association. Ann Surg 1963 May; 157(5): 657-669

Posted by AlabamaYesterdays at 8:48 AM