Some Alabama Songs from the Early 20th Century

You just never know where some history will pop up. A few months ago wife Dianne and I visited our daughter Becca Leon and husband Matt in Tuscaloosa. On this trip we took in the Black Warrior Brewing Company since we have done Druid City several times. One wall downstairs near the bar features large framed sheet music covers of three old songs related to Alabama in some way. Here's what I found about those tunes and a few others after a bit of research.

Alabama has inspired many songs over the decades by natives, residents and people who have never even visited the state. In June 2014 I wrote a post on some songs related to Birmingham. I'll be returning to this rich topic at some point in the future as well.

As noted at the end, these images come mostly from digital collections at the U.S. Library of Congress. The University of Alabama digital collections include the Wade Hall Collection of Southern History and Culture: Sheet Music which has numerous examples of songs related to Alabama. 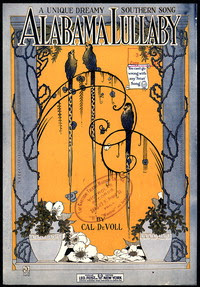 "Alabama Lullaby" is subtitled "A Unique, Dreamy Southern Song." The piece was written by Cal DeVoll and published by the New York City firm of Leo Feist in 1919. Feist, who died in 1930, became one of the largest publishers of popular music in the world. The only other bit of information I've discovered so far about composer DeVoll is that his "The Hello Song" was used in the 1990 film Crazy People. "Alabama Moon" was published in 1917 by Jerome H. Remick's firm in Detroit. Between 1914 and 1917 George Gershwin composed many songs for the company. The lyrics for this piece were written by J. Will Callahan; he died in 1946. One of his best know songs is "Smiles". Egbert Van Alstyne was a very popular composer of music for songs until about the time this one appeared. Among his many hits were "Navajo", "In the Shade of the Old Apple Tree" and "Pretty Baby." He continued composing into the 1930's and died in 1951.

Below I'm including pages 2,3 and 4 of this song's publication to give an idea of what complete published song sheets looked like. Sorry the clarity is not better. You can find the pages here on the Library of Congress' web site if you'd like to enlarge and read the lyrics. 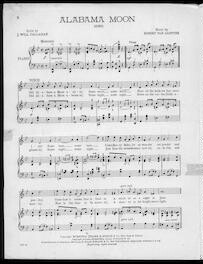 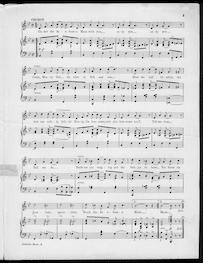 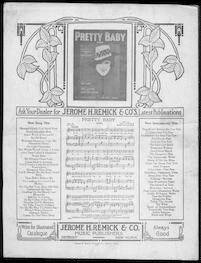 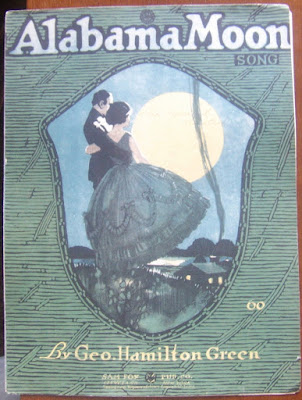 Another "Alabama Moon" appeared in 1920, written by George Hamilton Green. He was a xylophonist, composer and recording artist very popular in the early 20th century. Green died in 1970. The Sam Fox company was founded in Cleveland in 1906. In addition to numerous popular songs, the company was the first in the U.S. to publish film scores. According to Ryan Lewis' dissertation on Green, ﻿"Alabama Moon" became one of the most popular songs in 1920 both in print and as a recording. The song was part of a post-World War I boom in songs that depended on utopian visions of the antebellum South. Publisher Fox heavily promoted the song, using cotton fields, farmhouses, moons with smiling faces and minstrels in black face in his advertising. The waltz was recorded by several different groups featuring Green on different labels in 1920.
﻿ 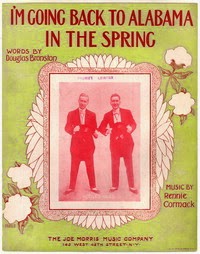 This 1913 song has music composed by Rennie Cormack and lyrics by Douglas Bronston. The Joe Morris Music Company in New York published it. I have found very little on the two individuals or the music company; links give some more of Cormack's compositions and other songs published by Morris. I'm as yet unsure if this Bronston is the same one credited with writing a number of film scripts between 1915 and 1928. More info about that Bronston is here. He was born in 1887 and died in 1951. 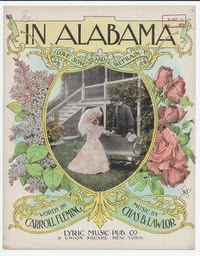 "In Alabama" appeared in 1900. Composer Charles B. Lawlor was a vaudeville performer and composter who immigrated to the U.S. from Ireland in 1869. Perhaps his most famous song melody was "The Sidewalks of New York" from 1894. The song gained another round of popularity from its use at the 1928 Democratic National Convention in the city. I have not found much on Carroll Fleming except references to other songs for which he provided the lyrics. One of those is the 1901 "The Hand that Rocks the Cradle Rules the World."

I have also found very little on the Lyric Music Publishing Company. This song sheet cover gives New York City as its location; another song sheet from 1918 I saw on the net gave Seattle. Perhaps the company relocated after "In Alabama" was published.﻿ 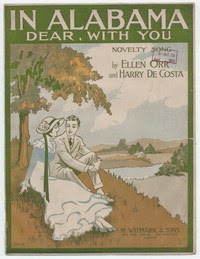 I haven't yet found anything on Ellen Orr, one of the composers of this "novelty song" published in 1915. I did find some information about Harry DeCosta on the Internet Movie Data Base. He was born in 1885 and died in 1964. A pianist for music publishers, he also wrote and composed for radio programs. His song "Tiger Rag" has appeared in a number of films, including Memoirs of a Geisha in 2005. The song's publisher was Marcus Witmark & Sons, founded in New York City in 1886. The company was a major publisher of tunes for New York City's Tin Pan Alley until its purchase by Warner Brothers in 1929. 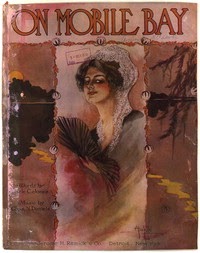 "On Mobile Bay" appeared in 1910 with lyrics by Earle C. Jones and music by Charles N. Daniels. I haven't found anything on these gentlemen, but the song's publisher was the major Detroit form of Jerome H. Remick. 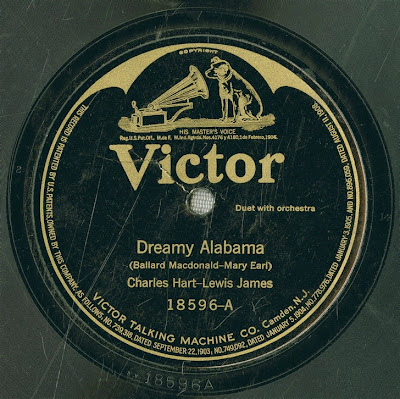 This image is the label from a 1919 recording featuring tenors Charles Hart and Lewis James. Hart is still a mystery, but James was a very busy singer into the 1930's. Born in 1892, he died in 1959. Ballard MacDonald [1882-1935] was a lyricist associated with New York City's Tin Pan Alley. "Mary Earl" was one of several pseudonyms used by the prolific composer Robert King. The conductor of the orchestra was French-Canadian Rosario Bourdon, who spent most of his career at the Victor Talking Machine Company. 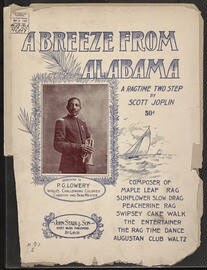 And now we come to our final example of this post, a "ragtime two step" by Scott Joplin from 1902. Born in 1867 or 1868, Joplin became famous as a ragtime pianist and composer before his death in 1917. He was living in St. Louis at the time he wrote "A Breeze from Alabama" and the other songs listed on the cover sheet demonstrate his popularity. The song was one of more than 40 he composed in addition to a ballet and two operas.

One question to ask about all these songs is whether any of the lyricists or composers ever visited Alabama or even the South. Scott Joplin was born in Texas, so at least one of them got that close! This phenomenon of popular songs about the South written by outsiders is explored in John Bush Jones' book, Reinventing Dixie: Tin Pan Alley's Songs and the Creation of the Mythic South published by Louisiana State University Press in 2015. I've recently purchased this book and hope it will be a rich source of information about the songs and their lyricists, composers and other personnel as well as the companies involved.

In a future post I'll examine some more songs related to Alabama from the late nineteenth and early twentieth centuries.


Unless otherwise noted, all sheet music covers etc. are taken from two digital sources via the U.S. Library of Congress, Historic Sheet Music Collection 1800-1922 or the Celebrates the Songs of America .


﻿
Posted by AlabamaYesterdays at 6:51 AM