The article below written by Roland Harper appeared in 1922. As L.J. Davenport, the author of the Encyclopedia of Alabama article about him notes, "He was one of the last botanists to visit and describe the native vegetation of the Southeast before it was altered drastically by human activity." Harper documented his field trips with extensive notes and more than 7000 photographs.

He took a circuitous route to Alabama. Born in Maine, he lived with his family there and in Massachusetts while his father worked as a science teacher and school administrator. When Roland apparently came down with tuberculosis, the family moved to Georgia. He graduated from the University of Georgia in 1897 with a degree in engineering.

The family moved back to Massachusetts, and within a couple of years Harper had published his first botanical paper. He enrolled in Columbia University where he studied both botany and geology and received a PhD in 1905. In that same year he began working for the Geological Survey of Alabama and continued there until his 1966 death.

Wikipedia has this to say about pine barrens:

Harper notes this botanical feature of pine forests in sand, gravel or clay stretching from Delaware into Alabama and Mississippi. These areas support bogs of typically unusual or rare plants. In Alabama Harper says the bogs are scarcer since the soil has more clay.

He describes his visits to a portion of these bogs in Autauga and Chilton counties in 1905 and 1921 respectively. Harper "examined quite a number of them" in Chilton County after noticing a pitcher plant from his train car. His article includes lists of woody plants and herbs including some not previously reported in the area.

The article by Davenport linked above gives more information about Harper's life and career. A book-length biography by Elizabeth Findley Shores is cited below. I am pleased to note that she is a relative!


Torreya was a journal published under that title from 1901 until 1945 by the Torrey Botanical Society named after a professor at Columbia College in the mid-19th century. Harper's article can be found at the Internet Archive here. 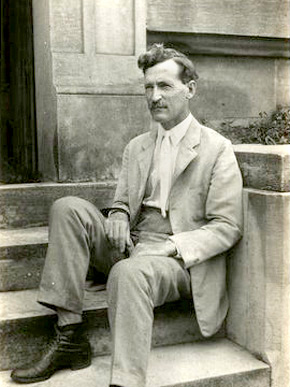 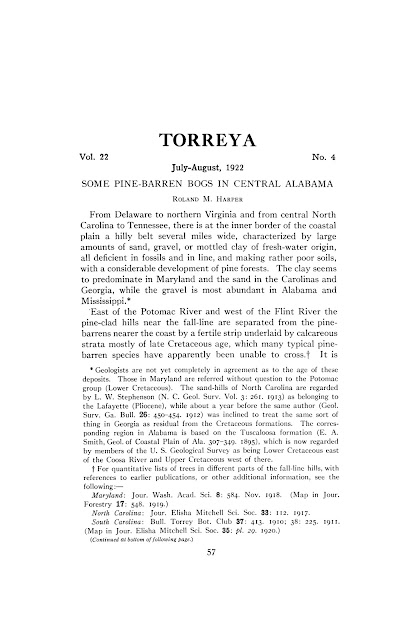 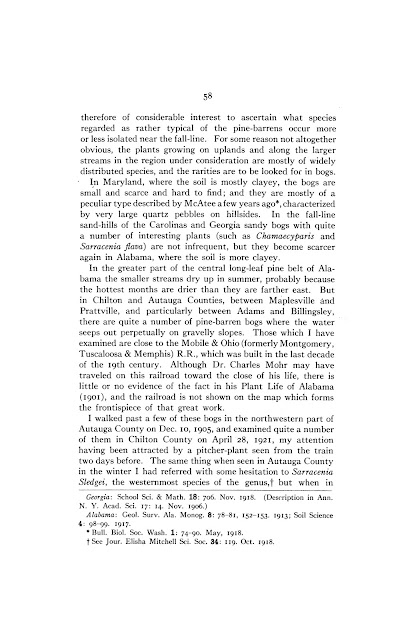 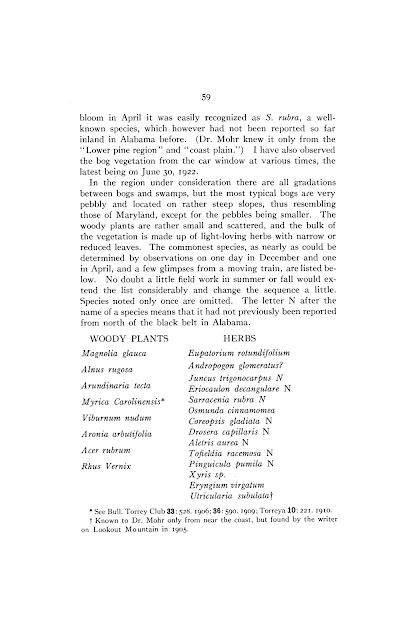 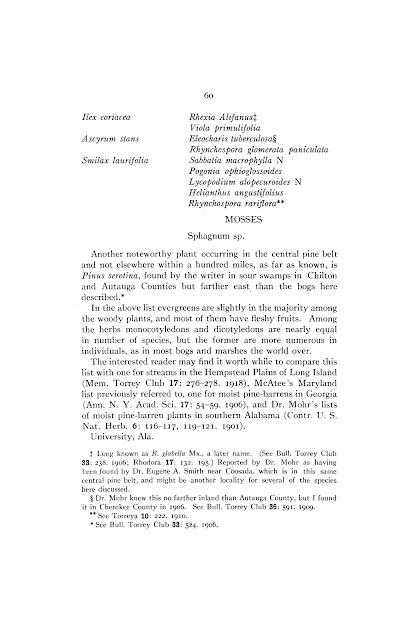 Posted by AlabamaYesterdays at 11:25 AM