Although born in Glasgow, Scotland, Allan Pinkerton came to the United States in 1842. By 1849 he had become the first police detective in Chicago. The following year he and a local attorney founded what became the Pinkerton National Detective Agency. The company still exists today, although now as a division of a Swedish security firm.

The Pinkerton's motto became "We Never Sleep." Pinkerton himself developed several investigative techniques still used around the world, such as shadowing a suspect and undercover work. During the Civil War he spent two years as chief of Union intelligence services; before he died, he had begun work to centralize America's criminal identification records. Today the FBI maintains just such a database.

In 1856 Pinkerton personally hired Kate Warne as the first female detective in the United States. At first he thought the widow sought clerical work, but she had seen his newspaper ad for a detective. Warne convinced him that a woman could do investigative work in ways a man could not--something she would prove over and over.

Before her death in 1868 Warne worked alongside Pinkerton and others on various important cases, including a plot to assassinate President-elect Lincoln in Baltimore in 1861 and many others during the Civil War. You can read the details of these activities on her Wikipedia entry and this essay. Some more about her is also available on this blog post. Warne has been the subject of a novel, a children's book published in 2015 and another book for children published early in 2016. She is also a character in The Pinkertons television series.

In 1858 Warne participated in a case with Alabama connections, which is detailed in Pinkerton's 1875 account, The Expressman and the Detective. Money totaling some forty thousand dollars had been disappearing from the Montgomery office of the Adams Express Company, which had a monopoly in the South on the delivery of letters, small packages and valuables. Suspicions naturally fell on Nathan Maroney, the man in charge of that office.

Maroney seemed an exemplary employee, having come to the city in the early 1850's after service in the Mexican War with a company of Texas Rangers. A native of Rome, Georgia, Maroney was the son of a physician.

Packages of money began disappearing in April 1858. Unable to prove anything, the company requested Maroney's resignation in January 1859. Maroney was then arrested, but made bail and awaited trial in June. At this point Adams Express, fearing they would still be unable to find enough evidence that would convict Maroney, hired the Pinkerton Agency. Allan Pinkerton was happy to have the business from such a large company, and sent a man to Montgomery to begin investigating Maroney and other possible suspects.

Pinkerton himself soon arrived in Montgomery. "On the journey I amused myself reading Martin Chuzzlewit, which I took good care to throw away on the road, as its cuts at slavery made it unpopular in the South. At the various stations planters got aboard, sometimes conveying their slaves from point to point, sometimes travelling with their families to neighboring cities. I did not converse with them, as I was not sure of my ability to refrain from divulging my abolition sentiments." Pinkerton quickly concluded that Maroney was probably quilty and Mrs. Maroney might leave with the money and head north at any moment.

On March 12, Pinkerton's worries came true. Mrs. Maroney and her daughter made their way to Charleston and then by steamer to New York. On April 5 Maroney himself left town for Atlanta, followed by a Pinkerton agent. From there he traveled to Chattanooga and Nashville and on to Memphis. He then boarded the steamer "John Walsh" to New Orleans. After a stop in Natchez, the steamer continued down river where Maroney and the Pinkerton agent checked into a hotel. The next time he was sighted Maroney had changed his appearance significantly. Soon the suspect had boarded another steamer for Mobile and then back to Montgomery. He had apparently satisfied himself that he was not being followed.

Meanwhile, Mrs. Maroney had made her way to Jenkintown, then a small place a dozen miles north of Philadelphia. At this point Pinkerton brought Warne into the case. She was to become Madam Imbert, travelling with a companion, Miss Johnson. Pinkerton's instructions were explicit. "[Y]ou will arrange for a permanent stay in Jenkintown, get acquainted with Mrs. Maroney, and when you get thoroughly familiar with her, make her your confidante, and to show her how implicitly you rely on her friendship, disclose to her that you are the wife of a noted forger, who is serving a term in the penitentiary. As confidence begets confidence, Mrs. Maroney will, most certainly, in time unbosom herself to you." [page 101].

Madam Imbert was first pointed out to Mrs. Maroney by someone who noted "that the tall lady was from the South." In various ways Imbert insinuated herself into Mrs. Maroney's life until she indeed had the confidence of the suspect's wife. Warne was apparently made for this kind of work. "Mrs. Maroney was impatiently awaiting the arrival of Madam Imbert. She did not have to wait long, as the Madam came down immediately after breakfast. Her commanding figure and decided expression made her appear like a general giving orders. She was perfectly calm, while all the rest were so excited that they did not know what to do or say. She controlled the position."[p264]

From that point Warne "controlled the position." She managed to convince Mrs. Maroney to "exchange" the forty thousand dollars which were presumed to include bills marked by the banks before shipping. Warne came up with an elaborate scheme involving another Pinkerton agent posing as a book peddler who would supposedly take the money to be exchanged. The sum of $39,515 was returned to the Adams Express Company.

Maroney was soon arrested in New York and extradited to Montgomery for the trial. He was convicted and sentenced "to pass ten years in the Alabama Penitentiary, at hard labor." [p 278] Mrs. Maroney had gone to Chicago with "Madam Imbert". What happened to her, or Maroney after he completed his sentence, is unknown.

Kate Warne died of pneumonia on January 28, 1868; Pinkerton was at the bedside. Many thought she had been Pinkerton's mistress; she often posed as his wife as they worked undercover. She is buried as "Kate Warn" in the Pinkerton family plot in Graceland Cemetery in Chicago. Two newspaper items about her that appeared in March 1868 can be found below.

Do yourself a favor and read Pinkerton's The Expressman and the Detective. It's a rip-roaring story. 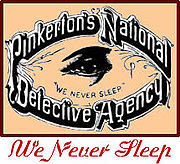 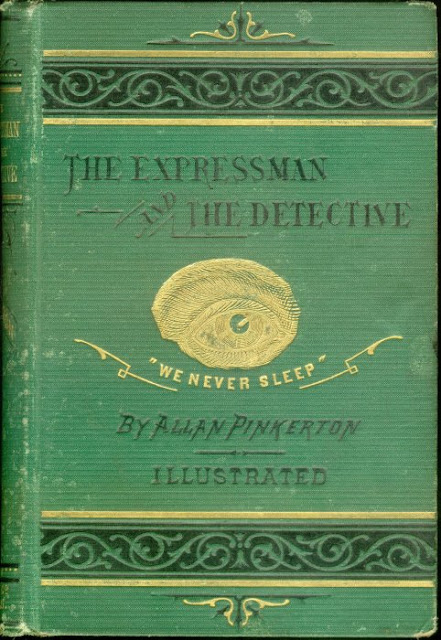 Full text published in 1875 can be found at Project Gutenberg 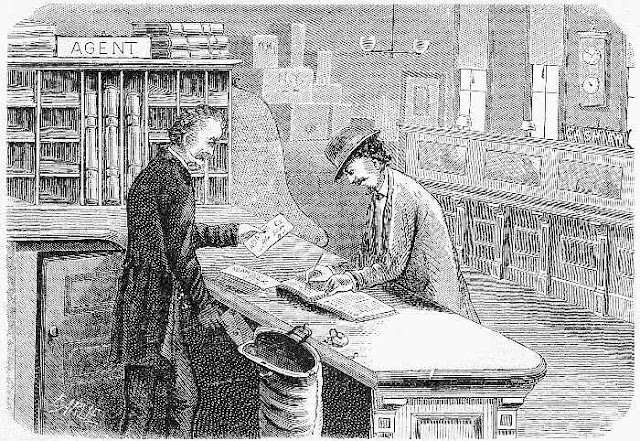 "As he stood outside of the counter, I was enabled to call off all the packages on the way-bill, but dropped the four containing the forty thousand dollars under the counter."—Page 237. 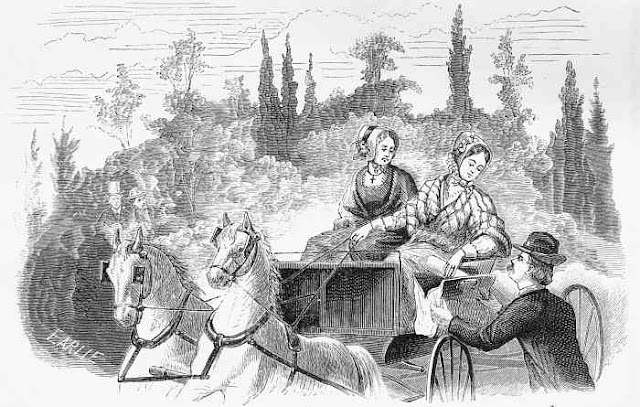 "The peddler lifted his satchel into the buggy; the Madam hurriedly emptied it of its contents, and holding it open, jammed the bundle of money into it, and handed it back to the peddler."—Page 268.

Kate Warne, as Madam Imbert, is depicted on the right, giving another Pinkerton agent posing as book peddler a satchel with the money. 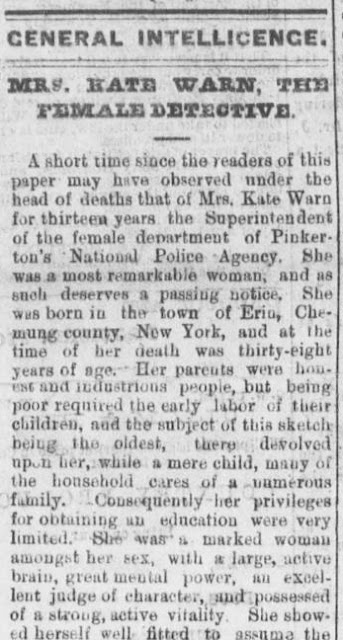 This long obituary appeared in at least a few newspapers in March 1868. The article reviews several of Warne's exploits as a Pinkerton detective. You can read the entire item from an Ohio newspaper here. The piece was reprinted from the Chicago Republican. 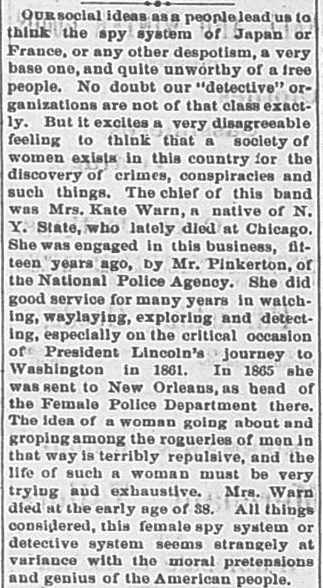 This editorial appeared in in a West Virginia newspaper on March 18, 1868. The item seems to evaluate Warne's work with some admiration and a good bit of horror. Warne's death is noted in passing near the end. 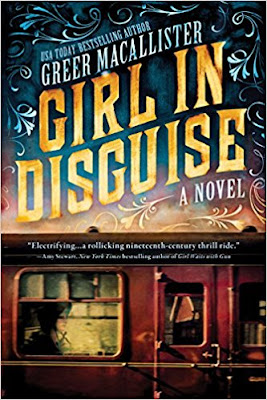 Posted by AlabamaYesterdays at 9:59 AM