No, I'm not referring to a showing of Gone with the Wind. That film first appeared in Birmingham on January 31, 1940, at the Ritz Theatre.

In March 1952 Birmingham saw its first actual Hollywood movie premiere. Birmingham News amusement editor Lila May Caldwell wrote two articles about the film Steel Town and the stars who also appeared in the city that month. See the articles below; links are provided where you can find more readable copies.

Her second article notes that an estimated 7000 people saw three showings of the film on March 20, and 7000 more jammed the streets as the stars arrived for the 9 pm show. Fans "shrieked welcome" to Ann Sheridan, John Lund, and Howard Duff.

Steel Town was filmed at a factory in California, but local businessmen urged Alabama Theater manager Norris Hadaway to convince Universal-International executives to hold the premiere in Birmingham. He did, and the "first picture ever to dramatize the making of steel" and its stars came to the Magic City.

The story follows a mill owner's son who has gone to work in the facility to learn the ropes. He's also living incognito with a steelworker's family; the daughter just happens to be played by Ann Sheridan. Her boyfriend played by Howard Duff  and the son played by John Lund vie for her affections as the steel is made.

I haven't seen this Technicolor film, but will now have to search it out. The Internet Movie Database identifies the film's tagline as "Men of steel! Women of flesh!" What more could a movie fan want?

This article appeared in the Birmingham News on March 9, 1952. 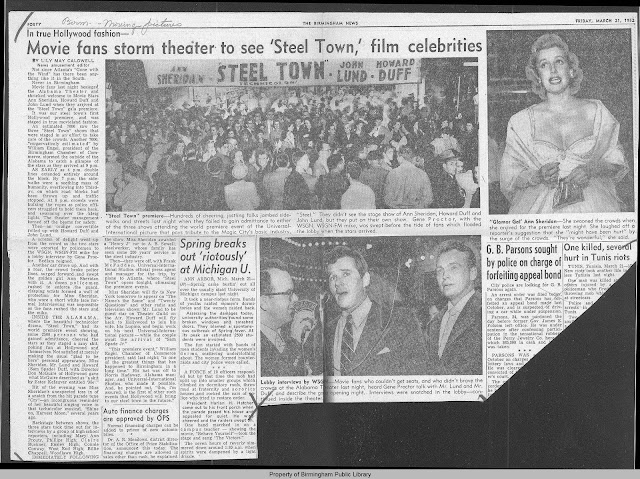 
A second article appeared in the Birmingham News on March 21.
Source: Birmingham Public Library Digital Collections
﻿
Posted by AlabamaYesterdays at 7:34 AM