Many of us of the Baby Boom persuasion remember classic Bugs Bunny with great fondness. The "wascally wabbit" first appeared in 1940 and numerous cartoons followed until 1964. I have not seen many of his various incarnations since he reappeared in 1976, but I sure remember watching his older adventures on Saturday morning cartoons. He was always a favorite of mine; his savage sarcasm in the face of everything made Mickey Mouse seem like a wimp.


There are many gems among the classic Bugs cartoons. One I especially like is the 1957 "What's Opera, Doc?" After the Marx Brothers 1935 film A Night at the Opera and this cartoon, I'm not sure how opera has survived as a serious art form.

Now we come to the subject of this post, the 1953 cartoon "Southern Fried Rabbit".  Since it was released just over a year after I was born, I doubt if I saw it in the theater. I do seem to remember it from those Saturday morning marathons. I have been unable to find a copy online, but according to the Wikipedia page for the cartoon, it has been released on a Looney Tunes DVD.

"Southern Fried Rabbit" times in at just under seven minutes in length. The cartoon opens with Bugs lamenting, "What carrots. Look at this tired specimen. I haven't seen a decent carrot for months around these parts." He then notices a newspaper headline announcing a record carrot crop in Alabama. "Alabama? Well, I'm Alabamy bound!" the rabbit announces. Bugs is referencing a 1924 Tin Pan Alley tune made famous by singer Al Jolson.

Of course, there are complications. Confederate Yosemite Sam tries to shoot him as soon as he crosses the Mason-Dixon Line. Bugs tells him the war ended over 90 years earlier, but Sam announces, "I ain't no clock watcher." Many in our fair South seem to share that philosophy.

You can read the details of Bugs' visit to the South below, where I've copied the Wikipedia description. Bugs wonders why the South is so far south, another bit of wisdom hiding in a cartoon. I don't think Bugs ever makes it to Alabama and those great carrots. 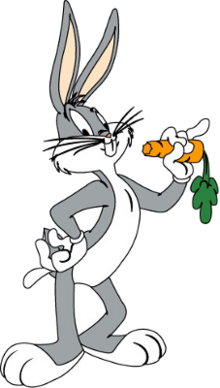 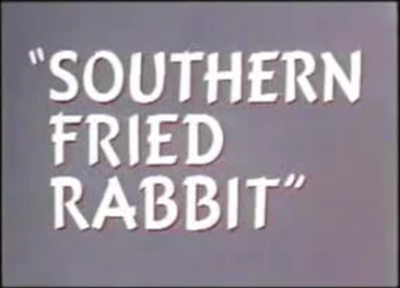 Title card from the cartoon

A severe drought has ruined the carrot crop in Bugs Bunny's northern home. Upon learning of a boom crop in Alabama, Bugs decides to make the trip to the fertile soils (later exhaustedly asking, "I wonder why they put the South so far south?"). As soon as he crosses the Mason–Dixon line, he is shot at by "Colonel" Sam, who chases him but then quickly realizes that he crossed the Mason–Dixon line and runs back, saying he has to burn the boots as they "touched Yankee soil!". Bugs asked Sam what the deal is, only to hear that Sam believes he is a soldier of the Confederate States of America and has received orders from General Robert E. Lee to guard the borders between the Confederate States and the United States. When an annoyed Bugs points out that the "War Between the States" ended nearly 90 years ago, Sam says that "I ain't no clock watcher!" and shoots Bugs away, prompting the rabbit to make several attempts to shake his antagonist.
First, Bugs disguises himself as a banjo-playing slave, singing "My Old Kentucky Home." When Sam asks for something "more peppy", Bugs promptly sings "Yankee Doodle," leading Sam to call Bugs a traitor. Bugs then begs Sam not to beat him, pulls out a whip (disguised as a banjo string), and forces it into Sam's hands, making Sam look guilty. After fleeing, the rabbit immediately comes in disguised as Abraham Lincoln, scolding Sam for "whipping slaves". Sam tries to protest with repeated "buts" but Bugs in response hands him a card to "look me up at my Gettysburg Address". Bugs' cover is blown, however, when his cotton tail shows through Abe's trenchcoat, prompting an infuriated Sam to chase Bugs into a tree. Bugs twice blows out Sam's match as he's trying to light a cannonball (the second time with an extended pipe), but the third time (even though Sam takes the precaution of going even further away from the tree than the second attempt) results in Sam taking an explosion.
Bugs then disguises himself as Stonewall Jackson (here as "General Brickwall Jackson"), fooling Sam into marching into a well. Later, Bugs flees into a mansion, where he disguises himself as Scarlett O'Hara (from Gone with the Wind), and when Sam searches the mansion for Yankees, he takes a cannon explosion looking inside a closet.
Bugs at last succeeds in getting Sam when, disguised as an injured Confederate soldier, he informs him that "the Yankees are in Chattanooga" in Tennessee. Sam marches to "Chattanoogee", and the finale has him using a shotgun to threaten the New York Yankees, preventing them from competing in an exhibition baseball game against the Chattanooga Lookouts: "The first dang Yankee to step out of that dugout gets his head blasted off!!!".


Posted by AlabamaYesterdays at 9:01 AM