Some Family Photos from Back in the Day

Most of these photos were taken by yours truly, or at least using the black and white camera I had in those days. The location for the first four was my paternal grandparents' house on Chandler Street in Gadsden. I imagine we were visiting for Sunday lunch. The other four were taken at our family home on Lakewood Drive in Huntsville. Some comments are below each one.

I also have photos from the 1950's that will do just nicely for another post someday soon...and probably more from the 1960's... 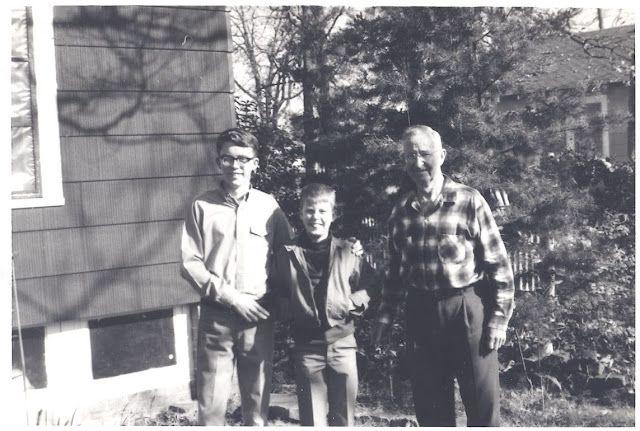 Here I am on the left along with younger brother Richard and our grandfather Amos J. Wright, Sr. Pawpaw worked for the L&N Railroad for many years and died in 1975. I remember one of his favorite sayings: "See you in the funny papers." I've written about his World War I training at Auburn here. 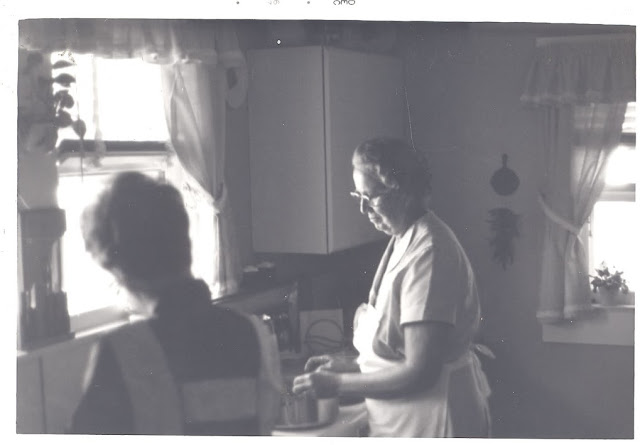 This photograph features my mother and grandmother washing dishes. Mawmaw seems about to laugh at her silly grandson taking pictures. She died in 1997. That little iron skillet hung on the wall there for a long time. 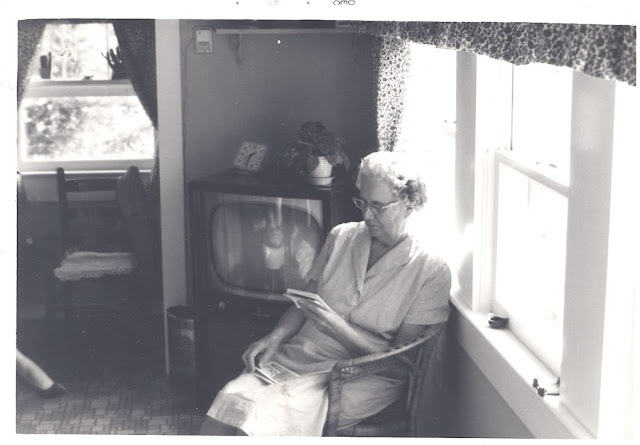 Here's Mawmaw again sitting in their long narrow den off the kitchen. I think she's looking at some photographs. The clock on the television--a Zenith, I think--tells us it's one-thirty. Mawmaw would later move her Singer sewing machine to that alcove on the left where it sat for many years. That ancient machine is now sitting in my daughter Becca's home in Oklahoma: 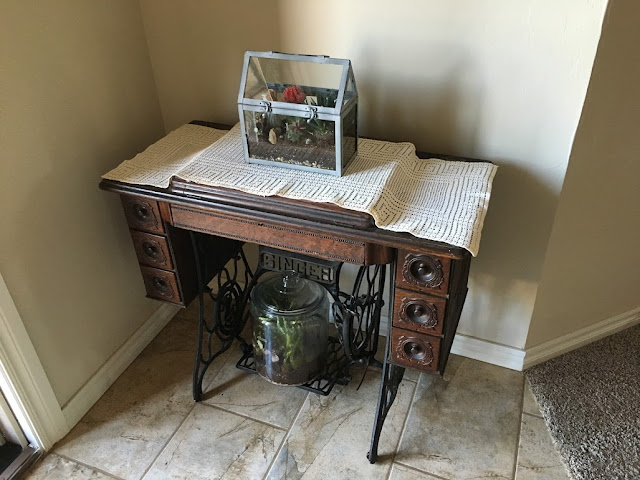 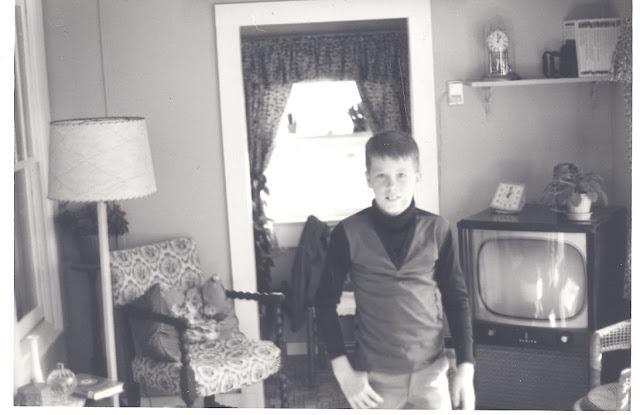 Younger brother Richard poses in the same den a half hour earlier. That clock on the shelf behind him is still in the family. On the table on the lower left is a candy dish Mawmaw always kept there and a book. Wonder if it was one I was reading and brought with me? Looks like a library call number on the lower spine. That appears to be one of Mawmaw's African violets on the television with the other clock. 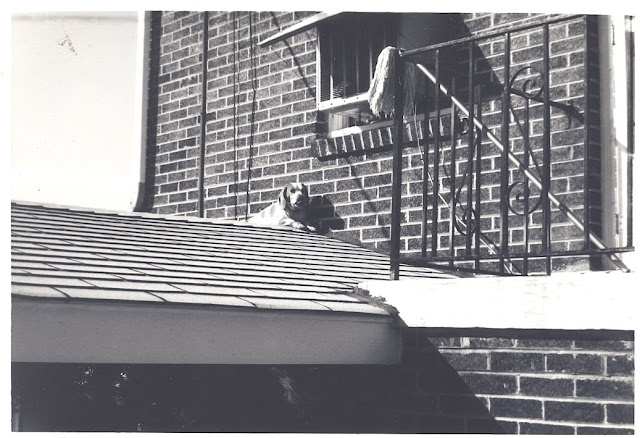 Now we come to the house in Huntsville. Our beagle Duchess surveys her back yard domain from the roof over the basement entrance. 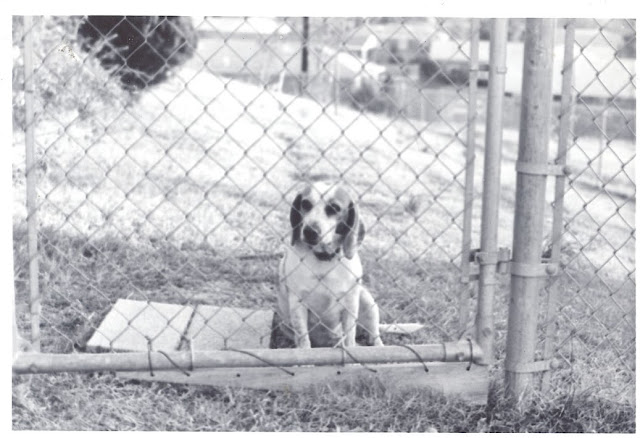 Here's Duchess behind bars--er, the fence--probably wondering why I'm taking pictures instead of playing with her. 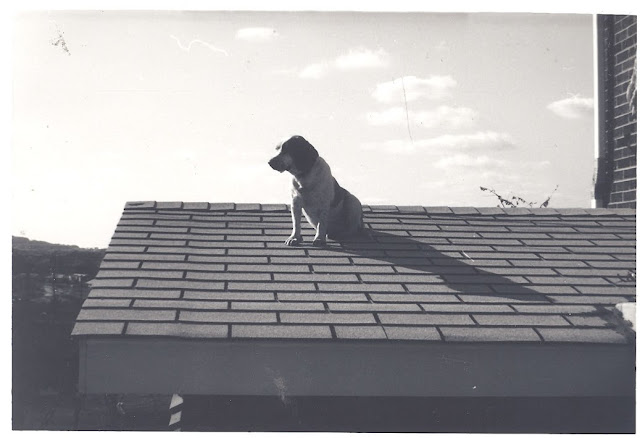 And here's Duchess in another roof pose. We lived in a house halfway up a fairly steep hill, and sometimes she would be sitting on the other side of the roof. That gave passersby coming up the hill or even some neighbors the impression that we had a dog on our roof. 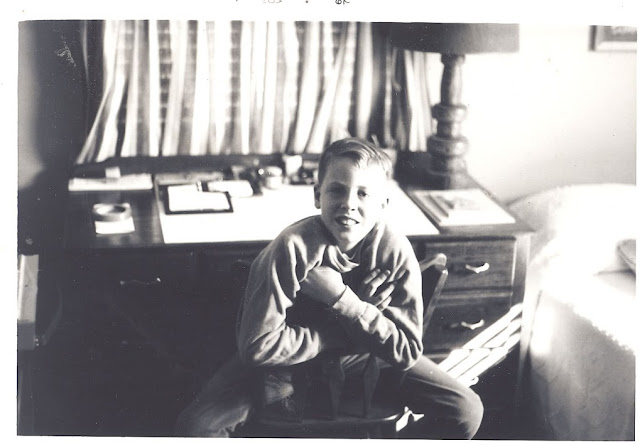 Brother Richard faces the camera in one of our bedrooms; it looks too neat to be his. Before he became seriously interested in Alabama archaeology, dad did a lot of woodworking and that desk and lamp are two of his pieces.

Posted by AlabamaYesterdays at 5:45 AM