This photograph shows a block of businesses along 17th Street North and was taken by the Jefferson County Board of Equalization for purposes of property appraisal. A large number of these photographs are in the Board's collections covering 1938-1977 at the Birmingham Public Library. The block is between 4th Avenue North and the 3rd Avenue North Alley.

Five African-American businesses are shown in this photograph taken sometime after 1936. On the far left, at 312 17th Street North, is the office of the Birmingham World. This newspaper began publication in 1930 and continued until at least early 1998. The Birmingham Public Library's "last issue received" was February 26 of that year. Whether the World remained at this location that entire time is currently unknown to me.

Next is the Poro School of Beauty and Culture. This business was probably a franchise of the Poro School founded by Annie Malone in St. Louis in 1917 and then moved to Chicago in 1930. The schools trained black women as sales agents for Malone's very successful line of beauty products.

The next two businesses appear to be Kelley's Barber Shop and Ashjoy Bakery. I've so far been unable to locate any more information on these two shops. That may be the bakery's delivery truck parked out front.

The last business on the right is the Cotton Club, presumably named after the famous Cotton Club in Harlem that operated during the 1920's and 1930's. On October 15, 1936, the club was registered as an Alabama Domestic Corporation. The three men named in the filing were James W. Aird, Brett George and Brett Martie. In the 1930 census we find James W. Aird to be a 25 year-old lawyer living with his parents and possibly an older sister. His father James. B. Aird was also an attorney. I've yet to research the other two men.

Photographs like this one give us a snapshot in time of a block of African-American businesses in Birmingham decades ago. Follow the link below the photograph to a version which you can make larger to see more details.

Also below is an aerial view of the block today. Appropriately enough, the Alabama Jazz Hall of Fame is located on the former site of the Cotton Club. 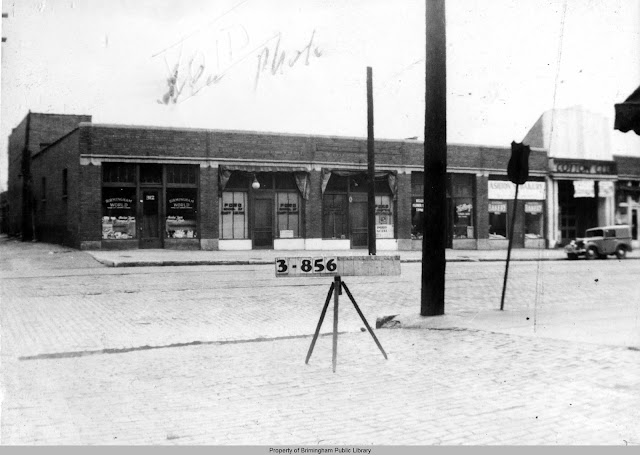 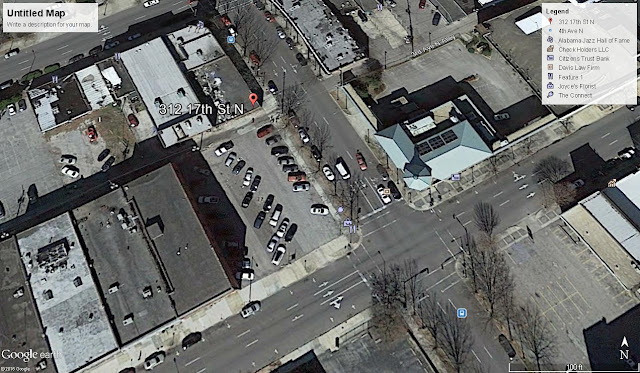 Here's the block today; the Alabama Jazz Hall of Fame is on the upper corner where the Cotton Club was located.

Posted by AlabamaYesterdays at 12:31 PM