In its January 1933 issue New Movie Magazine declared she was "Delectable Boots Mallory, the new Fox find..." Let's investigate her Alabama connection and her career.

Several sources give New Orleans as Mallory's birthplace; her mother Myrtle was born in Louisiana. However, other sources give Mobile. The 1940 U.S. Census lists New York as her birthplace. I have been unable to locate her family in Mobile until the 1930 U.S. Census, when her father John H., mother and several brothers and sisters are all listed. Mallory herself had left for New York by then. A number of sources do give her birth date as October 22,1913, including her Social Security record that lists Louisiana as her birthplace.

Mallory is known to have attended Murphy High School, which began as Mobile High School until the name change in 1927. That 1940 census gives "Highest Grade Attained" as the 8th grade. Around age 12 she started playing banjo in an all girls band. She also appeared as a dancer at the Lyric Theatre, Mobile's early vaudeville house. At some point a travelling group from the Ziegfield Follies came through town and noticed her. She soon relocated to New York City.

Mallory appeared in George White's Scandals of 1928, which ran on Broadway from July 1928 until January 1929. She followed with roles in the Ziegfield Follies of 1931, that ran from July until November of that year. She seems to have made enough of an impression in these musical revues to warrant a move to Hollywood.

In September 1931 famed director and actor Eric von Stroheim signed a contract for a film version of Dawn Powell's play Walking Down Broadway. The production would be von Stroheim's first sound film and feature his "discovery" Boots Mallory as one of the two female leads. The story featured strong sexual themes too explosive for the era, and von Stroheim's version was drastically cut and new scenes added. The film was finally released in April 1933 as Hello, Sister!. Von Stroheim's version is apparently lost; he never directed another film.

The first of Mallory's films to be released was Handle with Care in December 1932. As with Hello, Sister!, James Dunn played the male lead in this comedy-drama that has Mallory taking care of two rambunctious children left by her dead sister and falling in love with Dunn's character, an assistant district attorney. Oh, and assassins kidnap the pair of lovebirds but the children save the day. In the film Mallory sings "Throw a Little Salt on the Bluebird's Tail."

As a result of her appealing performance in that film, Mallory was chosen as one of the WAMPAS Baby Stars of 1932, an annual promotion by theater owners. Yet this positive publicity was undermined by the negatives surrounding Hello, Sister!. For whatever reasons, Mallory's film career did not last very much longer.

She made less than a dozen movies. In April 1933 Hollywood on Parade No. A-9 was released. In this musical comedy short, Mallory appears with numerous other stars under the guise of studio portraits coming to life. The cast includes Chico Marx, Mae West, Ginger Rogers, and Bebe Daniels. Also appearing is fellow Alabamian Johnny Mack Brown, the former University of Alabama football player making a name for himself in westerns.

Mallory acted in three more films in 1933, Humanity, The Wolf Dog and Carnival Lady. Two more films followed in 1934, one in 1935 and two in 1938. One of those two was Swiss Miss, a Laurel and Hardy comedy in which she appeared uncredited. She never returned to the screen. She also made two appearances on the Lux Radio Theatre in September 1936 and February 1939.

Her Wikipedia entry notes, "A tall blonde, Mallory was well regarded for her striking looks and was photographed by such photographers as George Hurrell. She also posed for risque lingerie photographs, and was painted nude by the pin-up artist Rolf Armstrong."

Mallory married three times. Her first husband was Charles Bennett, a much older New Zealander who began his career in silent films in 1912. She married him at age 16. By 1933 she was free to marry William Cagney, actor James Cagney's lookalike brother, an actor and film producer. The couple adopted fraternal twins Jill and Stephan. They divorced in 1946; one rumor claims Mallory caught her husband in a very compromising position with actress Ann Sheridan. The following year Mallory married actor Herbert Marshall; they remained together until her death in 1958.

The article reproduced below, "Along Came Bill!", has a long profile of Mallory and discusses her poetry and an operation she had.

Her ashes are interred at Chapel of the Pines Crematory in Los Angeles. Many more images of Boots Mallory can be found on this Pinterest page.

Mallory's birthplace remains to be determined. I leave you with two quotes about her from the Mobile Press-Register newspaper:

"Patricia (Boots) Mallory,, blonde film star and native of Mobile, was married Saturday to William Cagney after an airplane elopement to Tia Juana...Cagney is a brother of James Cagney and a recent arrival in the Hollywood film colony."
-Tuesday, September 26, 1933

That latter piece goes on to note her marriages to Cagney and Marshall. It also says she was working as an usherette at the Lyric Theatre in Mobile when the Ziegfield Follies performed there. 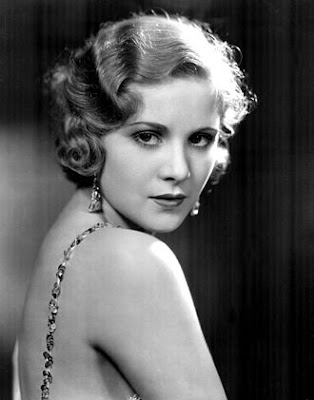 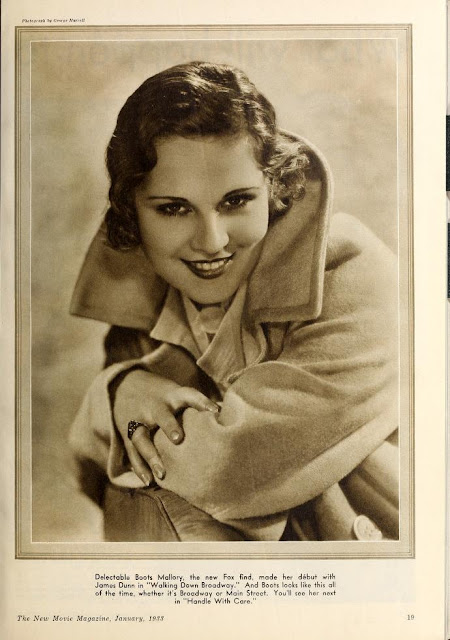 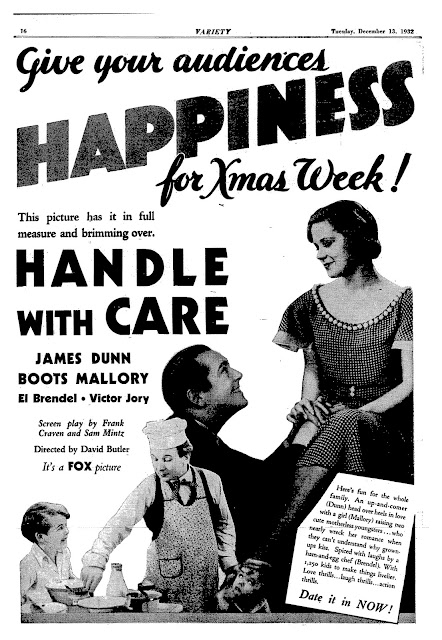 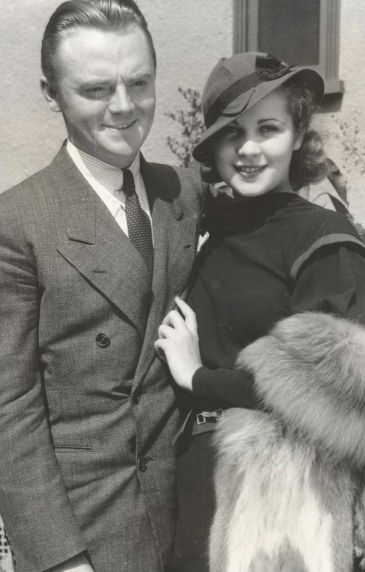 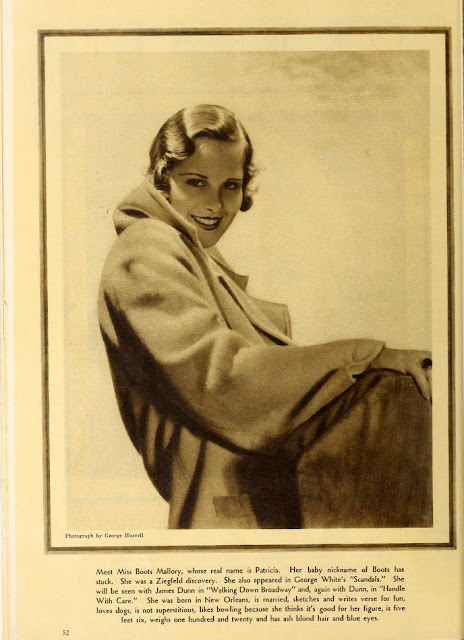 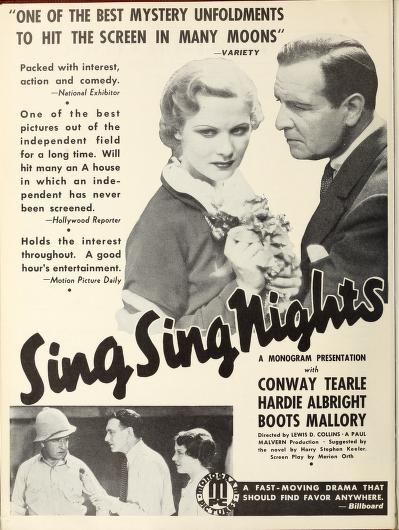 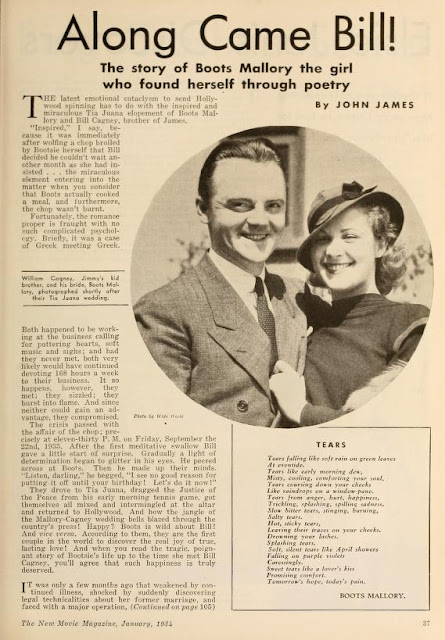 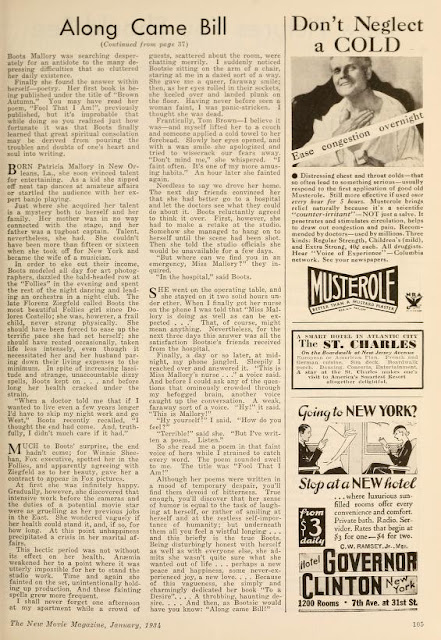 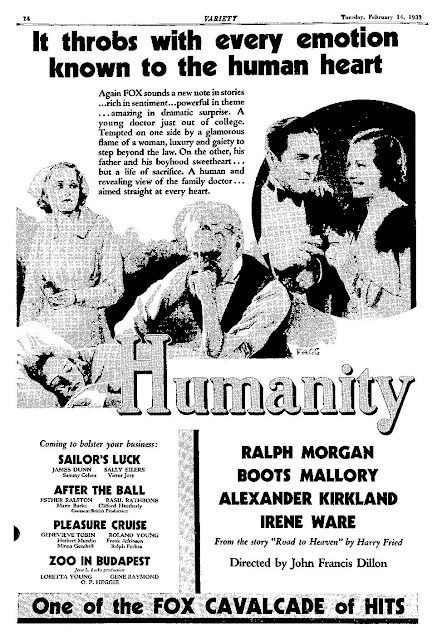 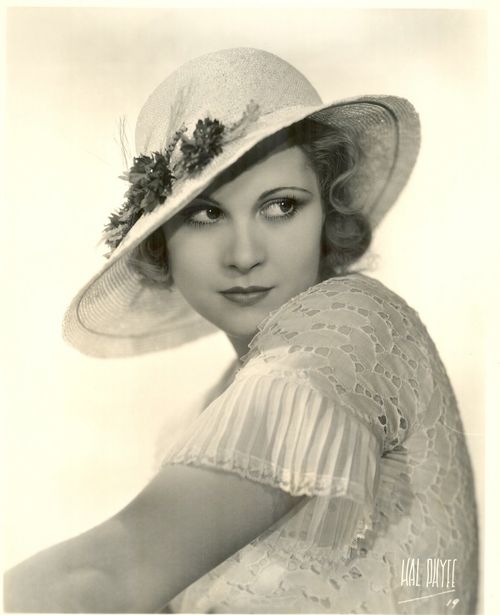 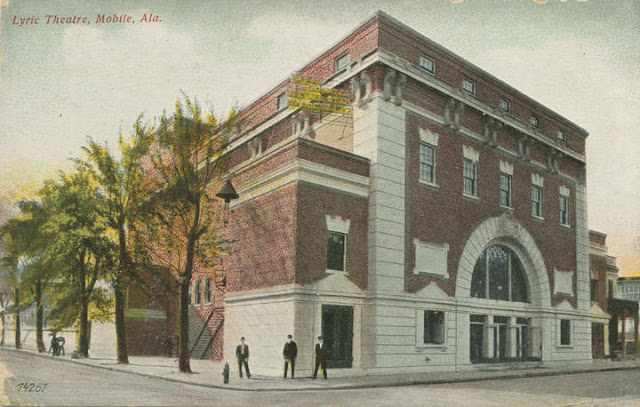 Postcard views of the Lyric Theatre in Mobile before 1920. 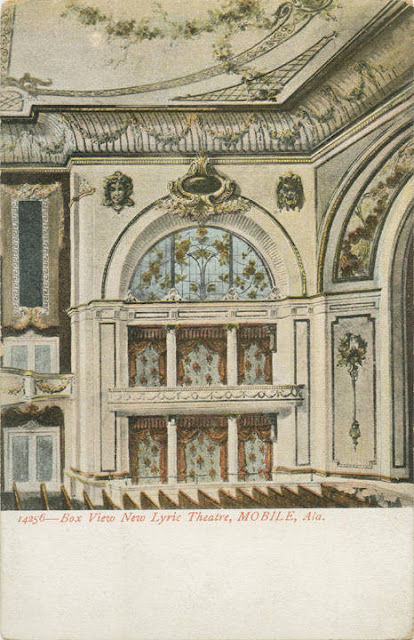 Posted by AlabamaYesterdays at 7:50 AM