The article below identifies the Relay House as the city of Birmingham's first hotel. The BhamWiki article on the hotel says it "was actually the new city's second hotel" without naming the first one. I presume one of the sources cited there might give that information.

At any rate, the Elyton Land Company built the Relay House in 1871 next to the Railroad Reservation at the corner of Morris Avenue and 19th Street North. The two-story wood frame building had 37 rooms and cost almost $14,000.

The hotel opened on December 15th that year under the management of William Ketchum. Wife Jane, daughter Margaret and her husband George R. Ward assisted Ketchum. Margaret and George became the parents of future city mayor George B. Ward.

The facility served as a train station and general social gathering place for the new city in addition to providing overnight accommodations. The Relay House had many special features for the day as discussed in the BhamWiki article linked above. That article also has an engraving of the hotel showing it from a slightly different angle than the photo here.
n In 1886 the hotel was torn down and replaced with Union Station, the city's first significant railroad station for passengers.
. 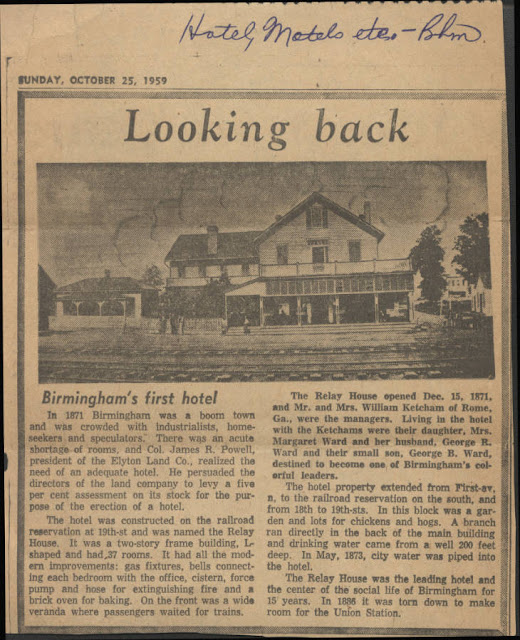 Article from the Birmingham News 25 October 1959

Posted by AlabamaYesterdays at 8:14 AM