In 1985 Doubleday published Masterpieces of Terror and the Supernatural : A Treasury of Spellbinding Tales Old & New, 650 pages of stories, many written by giants of literature ranging from Bram Stoker to Tennessee Williams and J.R.R. Tolkien. Tucked in among these works is "His Unconquerable Enemy" by W.C. Morrow, who just happened to be born in Selma on July 7, 1854. Another of his stories was adapted for the "Young and the Headless" episode of the Monsters TV series broadcast on November 25, 1990, and starring Karen Valentine. "An Original Revenge" appears in The Mammoth Book of Victorian and Edwardian Ghost Stories published in 1995 by Carroll & Graf.

Morrow's Wikipedia entry and his information on the Tellers of Weird Tales site offer some information about his early years in Alabama. Wikipedia's source is a critical essay on Morrow's work in S. T. Joshi's book The Evolution of the Weird Tale (2004). Terence Hanley, who maintains the Tellers site, does not give a source for most of his material, although he does quote another book by Joshi on Ambrose Bierce and his remarks about Morrow's writing. I've also done a bit of research in the U.S. Census and elsewhere, so here's the scoop so far.

Wikipedia notes, "Morrow's father was a Baptist minister and the owner of a farm and of a hotel in Mobile, Alabama. The American Civil War meant that the family lost its slaves and by 1876 the young Morrow was running the hotel, having graduated from Howard College (now Samford University) in Birmingham at the age of fifteen."

Hanley says, "William Chambers Morrow was born on July 7, 1854, in Selma, Alabama, son of a slaveholder. The Civil War and Reconstruction put an end to that of course. In 1870, when the census enumerator found them, Morrow's father and mother were keeping a hotel with their sixteen-year-old son in residence. Morrow graduated from Howard College (now Samford University) at age fifteen and moved to California in 1879. "

Apparently Hanley also relies on the Joshi essay about Morrow. I have not found the family in the 1860 U.S. Census, but I did locate them in the 1870 one. Father William Chambers Morrow and wife Martha are included, as well as daughter Georgia (20), W.C., Jr. (16) and younger sister Dozella (7). The occupation of Morrow's father was given as "Hotel Keeper"; the mother was "Keeping Hotel." They were living in the town of Evergreen in Conecuh County.

Via Ancestry.com I found Morrow and his father listed in Mobile city directories for 1875 and 1876. The father was Manager of the Gulf City Hotel; his son was the "Proprietor". Both lived at the hotel. So far I have not found the name of the hotel in Evergreen or anything about the Gulf City Hotel in Mobile except it's listing in the 1878 city directory which placed it at the southeast corner of Water and Conti.

In addition, I've found nothing about Morrow's time at Howard College, which was incorporated in Marion in 1841 by the Alabama Baptist State Convention. The college did not move to East Lake in Birmingham until 1881. If the elder Morrow had indeed been/remained a Baptist minister, he may well have sent his son to Howard.

Morrow apparently left Alabama behind for good in 1879 and moved to California. Why the move there and how he began writing remain mysteries, but from the 1880's until about 1908 he published a number of stories. Listed below are those pieces currently included in the FictionMags Index. Some of his tales and novels were published in newspapers, including William Randolph Hearst's San Francisco Examiner.

Many of Morrow's short stories are science fiction or horror. One of his best-known tales is "The Surgeon's Apprentice" (1887), later published as "The Monster-Maker" in his collection The Ape, the Idiot and Other People (1897). A 2000 collection of Morrow's horror and science fiction stories is The Monster Maker and Other Stories. The title story tells of a doctor/mad scientist who has a patient wishing to die. The doctor removes the patient's head and then keeps his body alive. His stories "Over an Absinthe Bottle" [p. 473-4] and "His Unconquerable Enemy" [p. 628-629] are discussed in Jess Nevins' Encyclopedia of Fantastic Victoriana (2005).

Morrow also published several novels and other works. His first novel, Blood Money, came out in 1882. The work is based on a land title dispute that took place in May 1880 on a farm in the San Joaquin Valley near Hanford, California. A clash between settlers and a U.S. Marshall and others representing the Southern Pacific Railroad resulted in seven deaths. The incident, known as the Mussel Slough Tragedy, later became the basis for Frank Norris' novel The Octopus (1901) and May Merrill Miller's novel First the Blade (1938). Ironically, Morrow began work in public relations for the Southern Pacific Railroad almost a decade later.

His suspense novel A Strange Confession appeared in the Californian newspaper in 1880 and 1881 but has not been reprinted. Much later he published two adventure novels, A Man; His Mark (1900) and Lentala of the South Seas (1908). He also wrote some non-fiction, such as Bohemian Paris of Today (1900), from "notes by Edouard Cucuel", and a short travel booklet, Roads Around Paso Robles (1904). In 1889 he drew on his youthful experience for a 32-page pamphlet, Souvenir of the Hotel Del Monte, Monterey, California. A history of that hotel can be found here.

Morrow seems not to have published anything after 1908. Almost a decade earlier he had begun to teach writing. The Tellers of Weird Tales site notes,

"Ambrose Bierce mentioned his friend W.C. Morrow in an essay entitled "To Train a Writer" from 1899. Bierce observed that "Mr. W.C. Morrow, the author of 'The Ape, the Idiot and Other People,' a book of admirable stories, is setting up a school to teach the art of writing. If he can teach his pupils to write half as well as he can write himself he may be called successful." (Quoted in Ambrose Bierce, A Sole Survivor: Bits of Autobiography, edited by S.T. Joshi and David E. Schultz (1998)."

What Morrow did for the remaining years of his life is unknown. He died on April 3, 1923, in Ojai, Ventura County, California. In 1881 he had married Lydia H. Houghton; she is listed with him in the 1920 U.S.Census. The couple is said to have had a child that was either stillborn or died in infancy and no other children.

Various other questions about Morrow remain to be investigated. Where is he buried? What happened to his wife and his parents and siblings back in Alabama? Did he ever return to his home state before he died? Perhaps one day a fuller biography will be written.

Morrow lived and worked in San Francisco in the late 19th and early 20th centuries at a thriving time for the city's literary scene. Majors writers such as Bret Harte, Jack London and Frank Norris as well as many lesser known authors plied their trade alongside Morrow. And this group, which preceded the San Francisco Renaissance and west coast Beat writers in the city by many decades, had an Alabama connection. 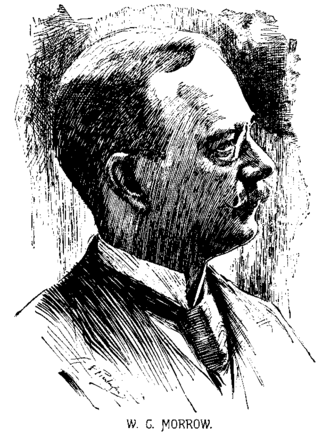 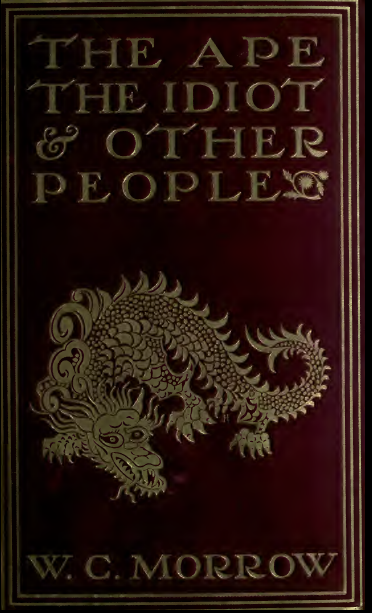 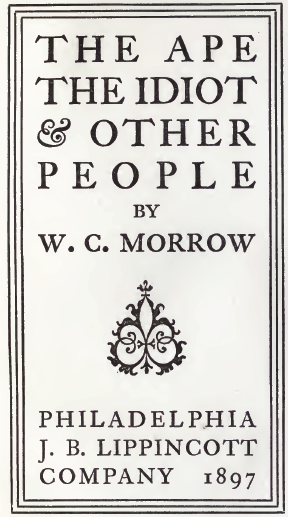 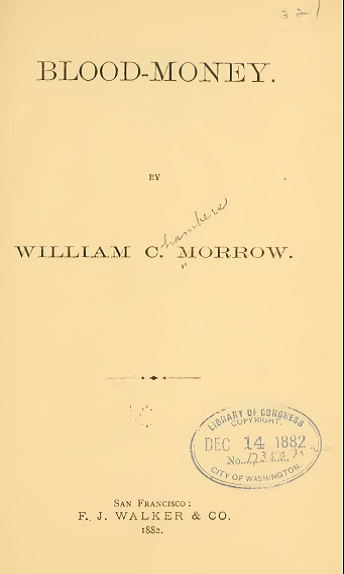 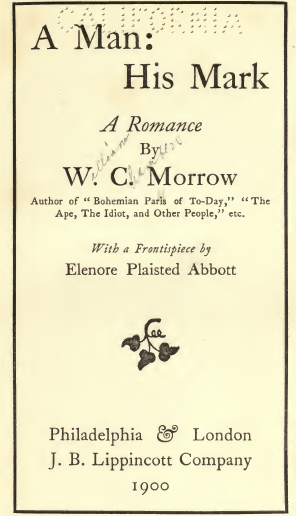 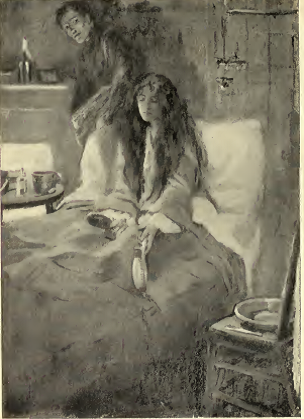 Frontispiece to A Man: His Mark

Artwork by Elenore Plaisted Abbott, a well-known book illustrator and painter of the time 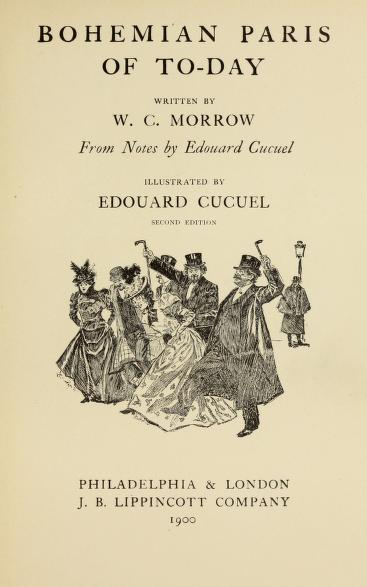 
Posted by AlabamaYesterdays at 10:02 AM