I recently did a post on the town of Joppa, the hometown of major league baseball pitcher Jack Lively. He played for the Detroit Tigers in the 1911 season. His son Buddy played for the Cincinnati Reds for several years during the late 1940's.

In researching Lively, I came across another father-son pair of major league players, Guy Morton, the "Alabama Blossom", and his son Guy, Jr. The state has produced numerous professional baseball players over the years, and I plan to return to this topic in the future.

The elder Morton was born in Vernon on June 1, 1893. I found the family in Vernon in the 1900 U.S. Census via Ancestry.com indexed as "Mortin". No father was listed, so he was either deceased or otherwise absent. Mother Mary and 12 others made up the household. Ten of these individuals are Mary's sons and daughters. Two are grandchildren--the sons of daughter Eliza Guin. At 7, Guy is the youngest child.

A lengthy biography of Morton has been written by Chris Rainey for the Society for American Baseball Research. He notes that Morton's father was Dr. Martin W. Morton, son of a doctor, who died a few days before Guy's birth. According to Rainey, Guy was playing baseball for the Columbus team in the Cotton States League in 1913. He ended that season with a 5-5 pitching record, and a scout recommended him to the major league Cleveland Naps (later Indians) team.

In the spring of 1914 he played in the Eastern Association, but was soon called up to Cleveland and pitched his first game on June 20, 1914. His final game in the majors came ten years later, on June 6, 1924. At the time of the 1920 U.S. Census, Guy and his wife Edna were living in Vernon. Guy's occupation was listed as "baseball player." Guy and Edna had married the previous year in Birmingham.

Morton ended his major league career with a 98-88 record and 830 strikeouts. Rainey's biography gives many career highlights, including pitching against Babe Ruth in 1917. He won ten games in four of his seasons pitching. The Indians sold his contract in 1924, and he played seven more seasons in the minor leagues, including five in the Southern Association for teams in Memphis, Mobile and Birmingham.

Morton and his wife moved to Sheffield where he went to work on the Wilson Lake Dam in the TVA system. He pitched several years on semi-pro teams in Florence and on the TVA team until his death by heart attack on October 18, 1934. He is buried in Sheffield; his gravestone notes his 2002 induction into the Alabama Sports Hall of Fame and declares that he was "Alabama's First Great Major League Pitcher." In 2001 he was named to the greatest 100 Cleveland Indians list.

Many major league baseball players have had nicknames over the years. Rainey does not give the source of Morton's "Alabama Blossom" nickname; perhaps Morton was a rare player from Alabama at the time.

The couple had one child, Guy Morton, Jr., who was born in Tuscaloosa on November 4, 1930. More about "Moose" Morton is below. 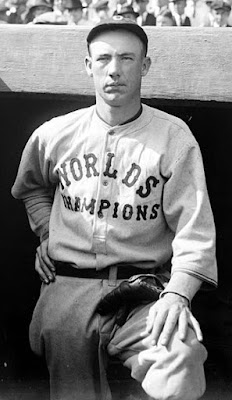 After his father died, the Guy, Jr.'s mother moved to Tuscaloosa to work in a University of Alabama museum, and he was sent to live with grandparents in Mississippi. His mother married Vaughn Shirley when Guy, Jr., was 11; his stepfather owned a grocery story in Mobile. The young Morton played for Murphy High School for two years, but graduated from Tuscaloosa High School in 1948 after his stepfather bought a grocery store in that city.

Moose started college at the University of Alabama on a scholarship, but tryouts led him eventually to a contract with the Boston Red Sox after his freshman year. He played a number of years in the minors as a catcher. He was called up by the Red Sox for one game, on September 17, 1954; he had one at bat and no hits.

After his baseball career ended, Moose coached youth teams in Alabama and Ohio where he eventually moved. He became a Baptist minister and served for many years; he died on May 11, 2014. Bill Nowlin has written an extensive biography for the Society for American Baseball Research. "Moose" is included in Richard Tellis' 1998 book, Once Around the Bases: Bittersweet Memories of Only One Game in the Majors (pp. 166-176). See the Nowlin link and the obituary link for more about his many achievements on and off the baseball diamond.

Posted by AlabamaYesterdays at 10:13 AM