Some Alabamians in New Orleans

I've done a few posts on this blog devoted to topics with only slight connections to Alabama history or culture. One such was "Two Alabama Natives Visit the Garden of the Gods". Mostly they are excuses to show a few pretty pictures. That's basically what's going on here, although there will be some minor Alabama stuff before the end.

Son Amos moved to New Orleans last year from Baton Rouge, and in March we finally went down for a visit. I had been to the Big Easy a few times before, mainly for professional meetings, but I was glad to get back and see more of the city. Dianne had never been to New Orleans except for a quick trip through on I-10 years ago.

Amos lives in the Lower Garden District just a couple of blocks from St. Charles Avenue. Some of the sights we saw that weekend are noted below.

Of course, one of the main attractions of New Orleans is the food, and we did our best to experience some of it. On Friday night we ate dinner at Cochon on Tchopitoulas Street. The place was packed, our wait was long, but well worth it. This "contemporary Cajun" restaurant is located in a renovated warehouse.

Saturday breakfast came courtesy of the Trolley Stop on St. Charles Avenue not far from Amos' apartment. The meal involved another wait, but the big French Special breakfast was excellent. We had lunch in the Quarter at the French Market Restaurant; the seafood kept us fueled for the afternoon. Dinner that night found us again on St. Charles Avenue, this time at the upscale Lula Restaurant Distillery. They distill vodka, rum and gin and claim to be the only restaurant-distillery in the southeastern U.S. I had the rum lacquered shrimp.

For brunch on Sunday morning we walked down Magazine Street to the DeVille Coffee House and Creperie. We all had the smoked salmon crepes, and it was superb. The coffee was good, too. Our final meal together took us once again to St Charles Avenue and the St. Charles Tavern Restaurant and Bar. This place is low key, and the boudin balls and seafood special were great!

We can pause here to mention one of the Alabama connections in this post; this one centers on Magazine Street. In 2004 a movie called A Love Song for Bobby Long came out, directed by Shainee Gabel and based on the novel Off Magazine Street by Ronald Everett Capps. In the film John Travolta plays Bobby Long, once an English professor at Auburn University who now lives in New Orleans with one of his former graduate students, Lawson Pines [Gabriel Macht] and their female companion, jazz singer Lorraine. She dies, and their house is inherited by her high-school dropout daughter, Pursy, played by Scarlett Johanssen. Most of the film follows Long and Pines as they help Pursy learn enough to graduate and bring her into their circle of strange but loving friends.

The film trots out some usual Southern stereotypes and accents, but is filled with compelling characters and humor. Travolta, Macht and Johanssen are all surprisingly good. And we get to see Travolta in an Auburn t-shirt and make a trip back to the campus at one point. Oh, and a lot of great authors make appearances throughout via Long and Pines' ongoing battle of the literary quotes.

I've yet to read Capps' only novel, but have a copy and plan to do so. He married an Auburn student, they both taught school in Brewton and have lived in Fairhope for some years. Their son is singer-songwriter Grayson Capps.

Some additional comments about our trip are below the photos. 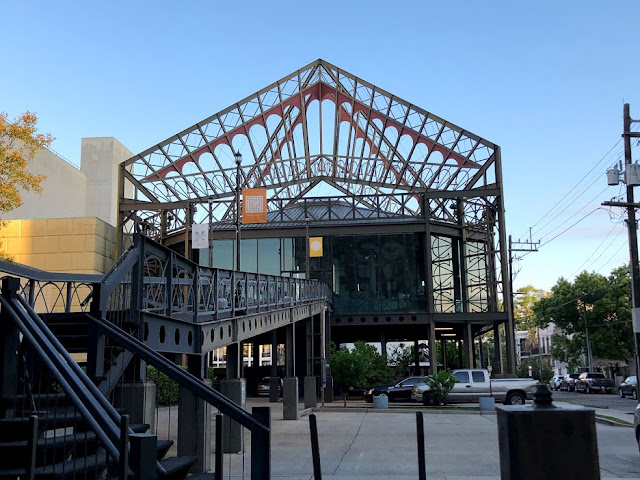 In 1981 engineers noted that Paris' iconic Eiffel Tower was sagging and the cause was a restaurant placed on top of it. The 1937 addition was dismantled and efforts made to place it elsewhere in Paris were unsuccessful.

An opportunity to buy it fell into the lap of American John Onorio. The 11,000 pieces were shipped to New Orleans, reassembled and reopened as a restaurant in 1986. The venue, located on St. Charles Avenue just outside the Garden District, currently operates as the Eiffel Society. 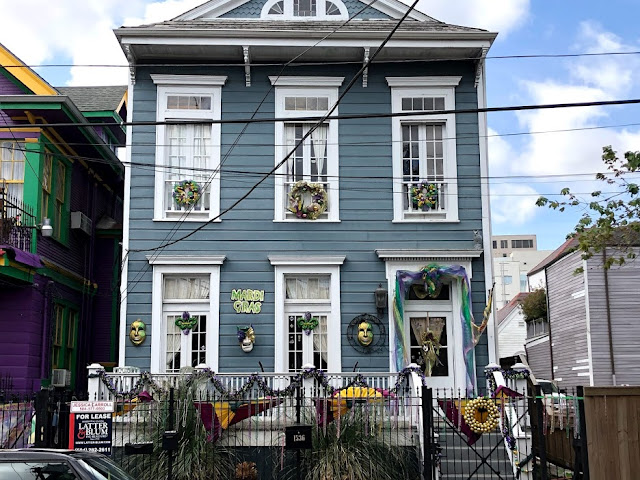 Just down St. Mary's Street from my son's apartment are two houses permanently decorated for Mardi Gras. You can see a bit of the purple one to the left. 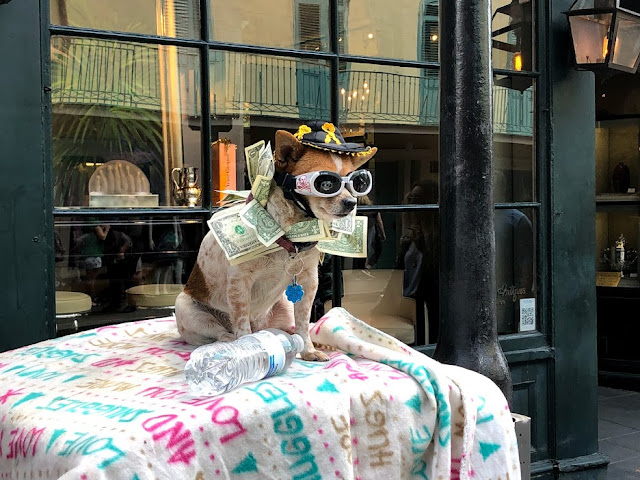 Since Dianne had never been to New Orleans, we spent Saturday afternoon in the French Quarter. One of the funniest sights was this little guy collecting dollar bills from passersby. He was totally cool and calm and obviously an old hand at his routine.

One of the places we visited in the Quarter to show Dianne was the Hotel Monteleone with its revolving Carousel Bar and displays of books by authors who have stayed there over the years. Of course the bar was packed so we moved on. 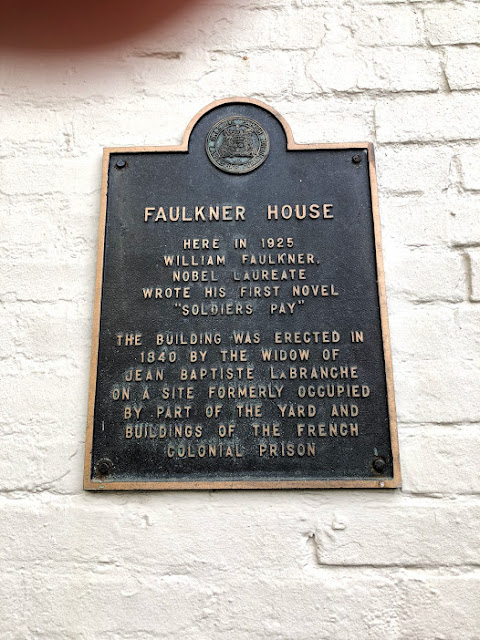 I recently read Jeff Weddle's 2007 book Bohemian New Orleans, which covers the city's literary scene primarily from the 1950's into the 1970's. However, writers throughout New Orleans' history also make appearances. The above plaque is on the wall near where son Amos and I are standing in the photo below in Pirate's Alley. 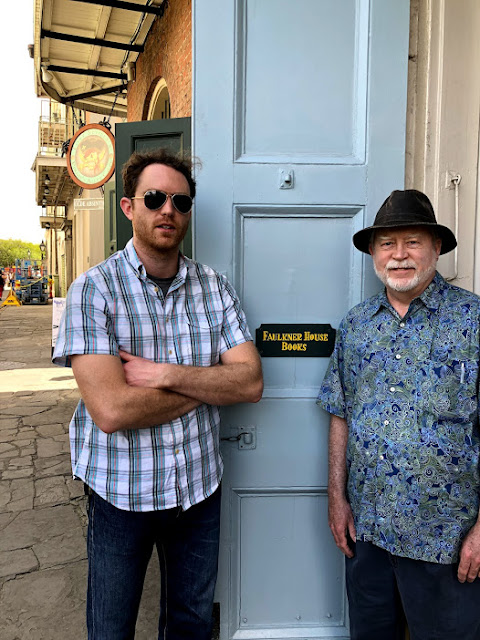 William Faulkner lived in New Orleans in the 1920's and wrote his first novel A Soldier's Story in this building. Faulkner Books, well worth a visit itself, is on the ground floor now. In the background you can see the round sign of the Pirate's Alley Cafe and Absinthe Bar which provided us with a table and a few beers for an hour's worth of people watching. Just across the alley, out of the photo, is St. Louis Cathedral, seen further below. 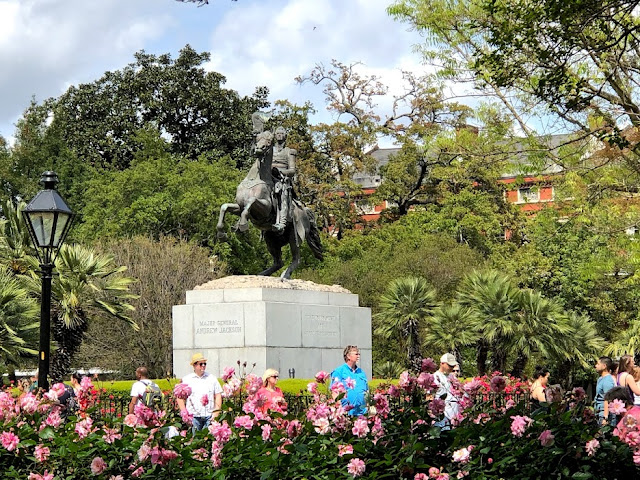 That day in the French Quarter and Jackson Square was a beautiful Saturday with a mild temperature and bustling with tourists but not overcrowded. The street artists, poets and entertainers were out in full force, and we also got to see a couple of wedding parades. 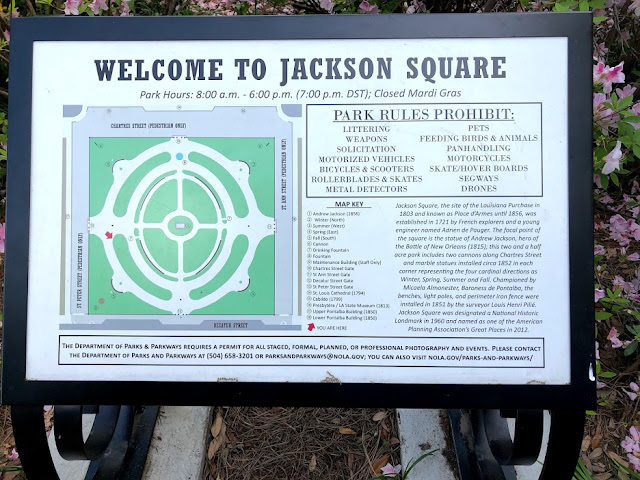 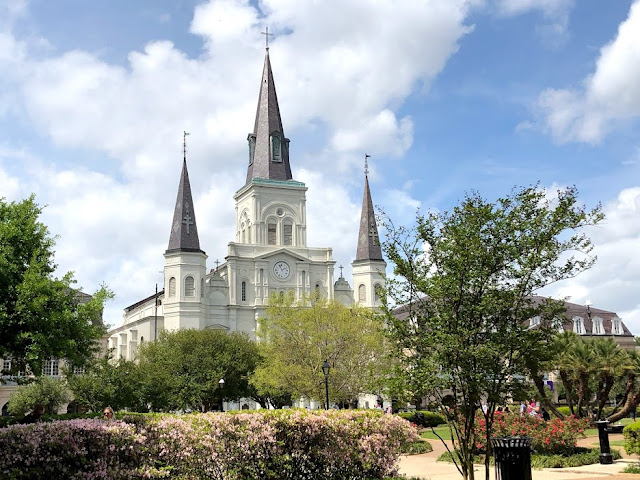 St. Louis Cathedral towers over Jackson Square in the French Quarter. The first church was constructed on the site in 1718 and raised to cathedral rank in 1793. The cathedral as seen here is the third church on the site and is the oldest Catholic cathedral in the United States. 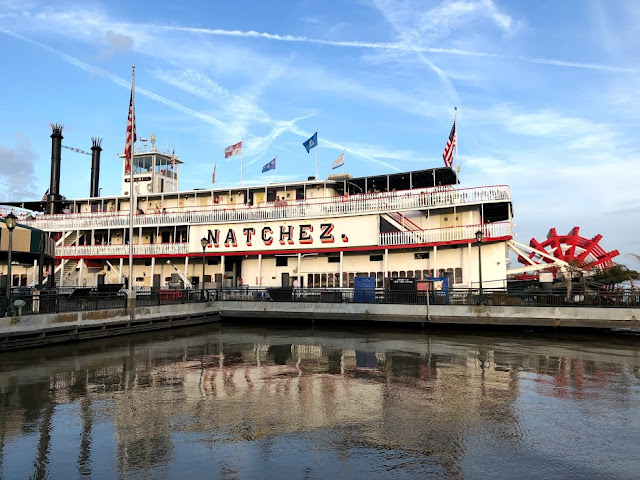 Amos has taken one of the cruises on this beauty and said it was well worth it. 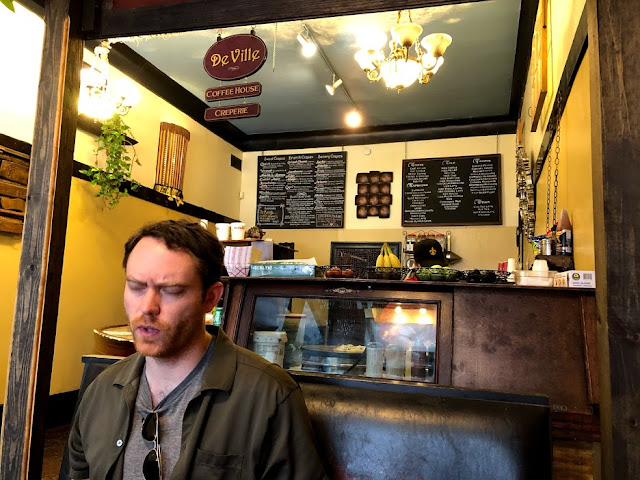 Here's Amos on Sunday morning in the DeVille Coffee House and Creperie where we had those delicious smoked salmon crepes. And good coffee! 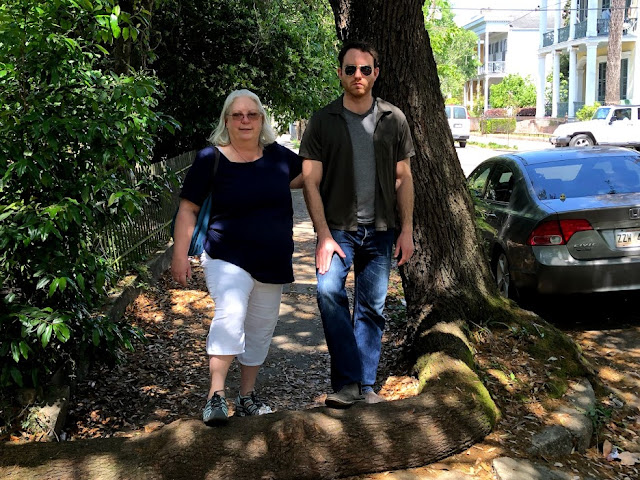 Dianne and Amos found a big tree root growing over the sidewalk near his apartment. The view below is looking down his street. 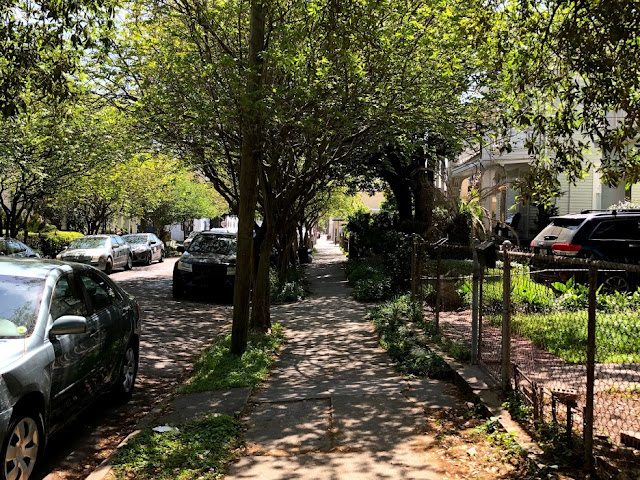 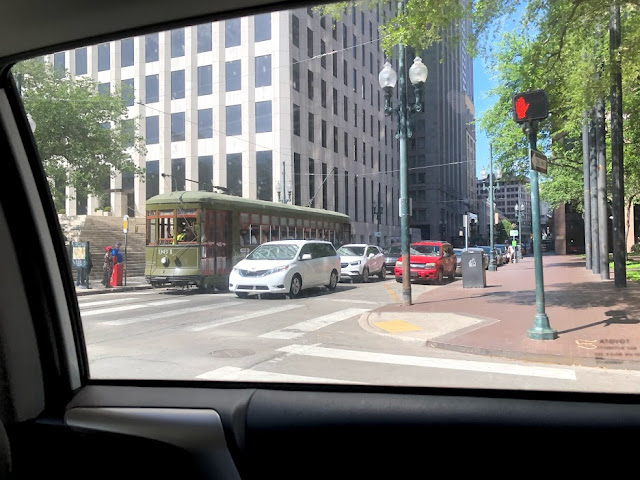 Classic street cars still rumble in New Orleans, and on Saturday we rode the Historic St. Charles Avenue Line into the French Quarter. The line has operated since 1893. The current cars were built in the early 1920's and refurbished between 1988 and 1994. In 1973 the line was listed on the National Register of Historic Places. That day it was a warm and crowded but fun ride! 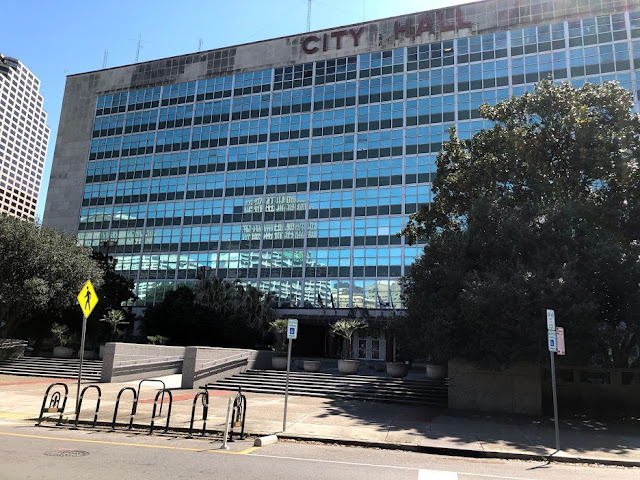 Amos is an urban planner, and  he works for the city in this building. 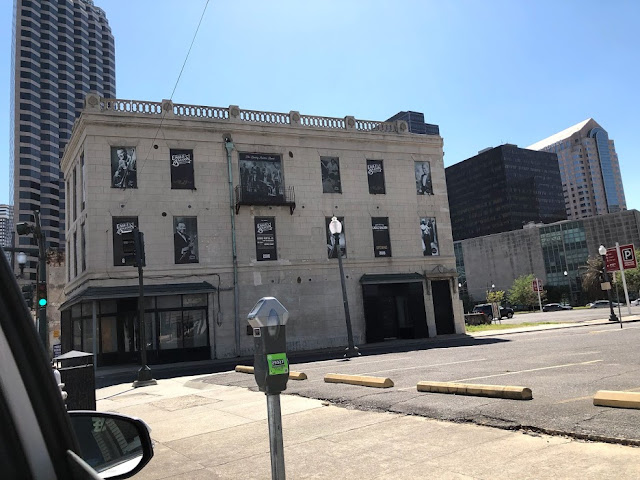 Very close to where Amos works is the Eagle Saloon, currently empty. Efforts have been going on for some time to redevelop the historic property built in 1851. The saloon was once in the bustling African-American business district of the city, and was a frequent stop of early ragtime and jazz greats such as Buddy Bolden, Sidney Bechet, King Oliver and many others. 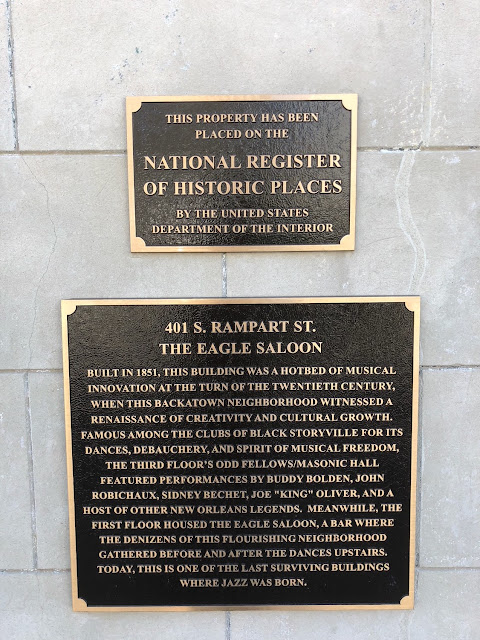 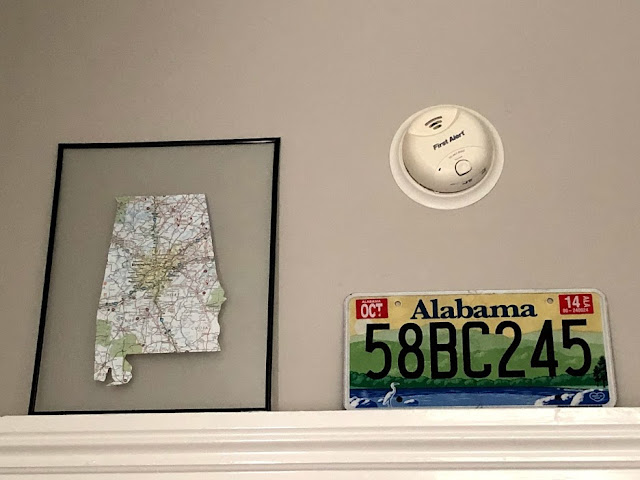 Now we come to another Alabama portion of our story. Amos has these items above the door into his kitchen. 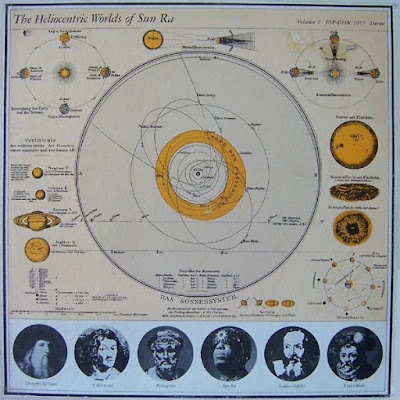 On a wall in his kitchen a framed copy of this Sun Ra album is displayed. He was a jazz composer, musician and bandleader born in Birmingham. 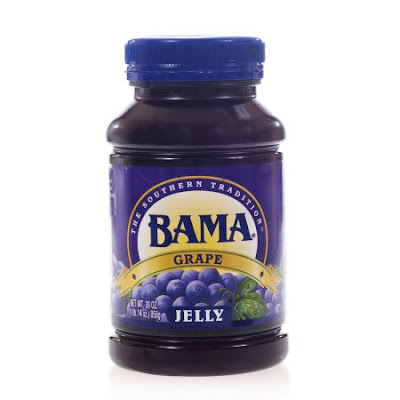 We did spot this product on the shelves at a local Wal-Mart; does that count? 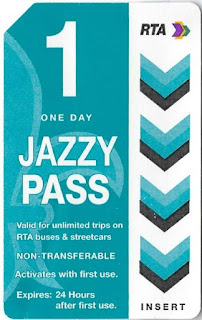