Big news, right? When I started work at UAB in August 1983, I soon noticed  new construction and mentioned it to someone. That person's response? "Get used to it. It never stops." That observation was certainly true until I retired in December 2015 and continues to be the case. I can understand why the initials "UAB" are often said to stand for the "University that Ate Birmingham."

UAB recently announced plans to demolish seven campus buildings over the next year to make way for future projects. The university had previously announced eventual demolition plans for an eighth building. Let's investigate. 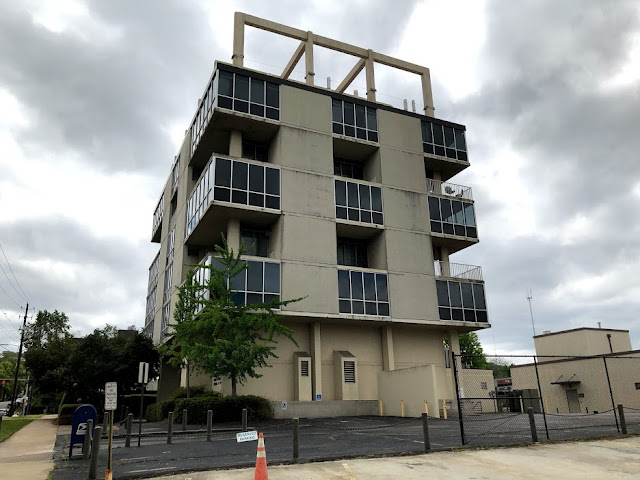 This building opened in 1960 as the Doctor's Center where a number of physicians and dentists had offices. The BhamWiki article on the structure has a tenants' list and gives this description: "The modern curtain-wall building with exposed concrete frame and cantilevering floor slabs contained four doctor's suites on each floor, with the ground floor opened up for valet parking service. Construction of the building cost $500,000." A second 10-story companion was designed but never constructed.

Update 11 August 2019: This building has been demolished. 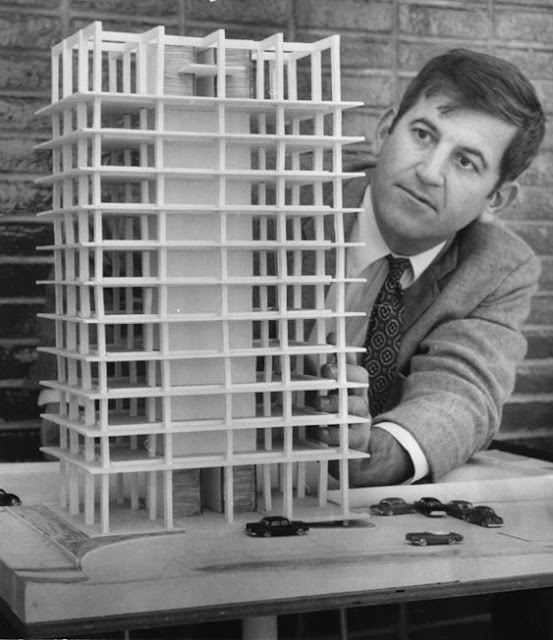 The architect for the project was Fritz Woehle, who moved to Birmingham in 1958 and remained in the city until his death in 2017. When the Doctor's Center opened, Woehle moved his office to the penthouse on the seventh floor.

In the 1970's he bought the property at 10th Terrace South containing several abandoned garage stalls. The site was converted and now houses his antiques collection and the legendary The Garage Cafe.

UAB purchased the building in 1985 with a gift from optometrist Paul Worrell and his wife Sylvia. Renovated to house the Vision Sciences program, the structure was dedicated in Worrell's honor in 1988. 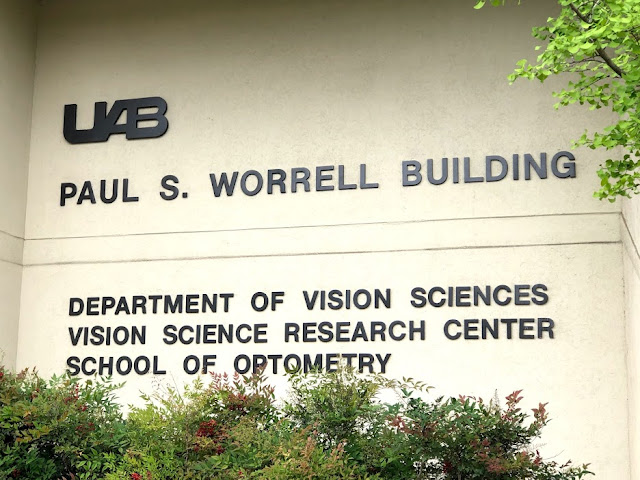 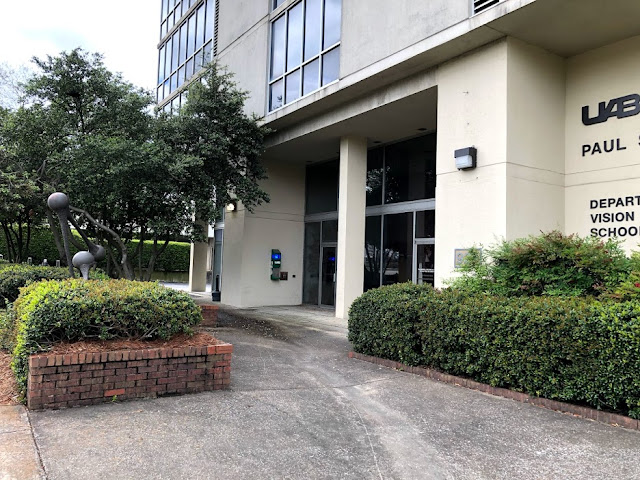 The entrance to the building features some of the public sculpture seen around campus. 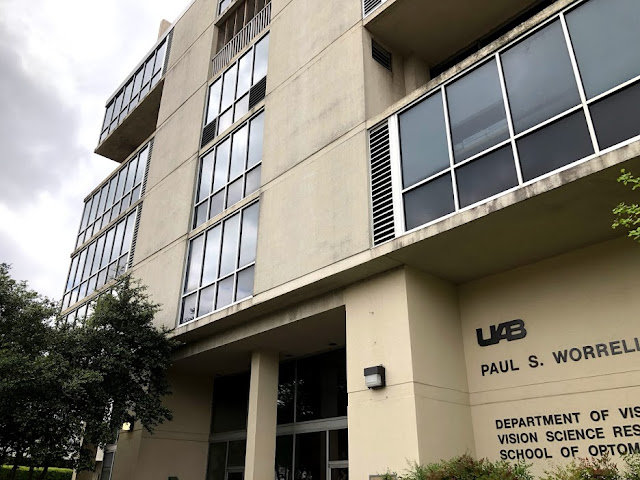 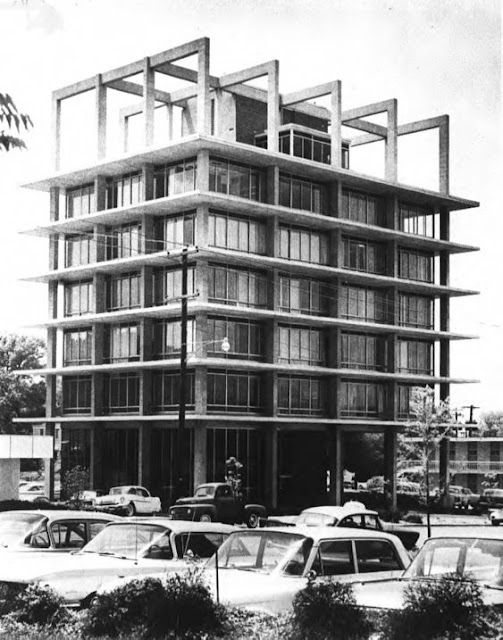 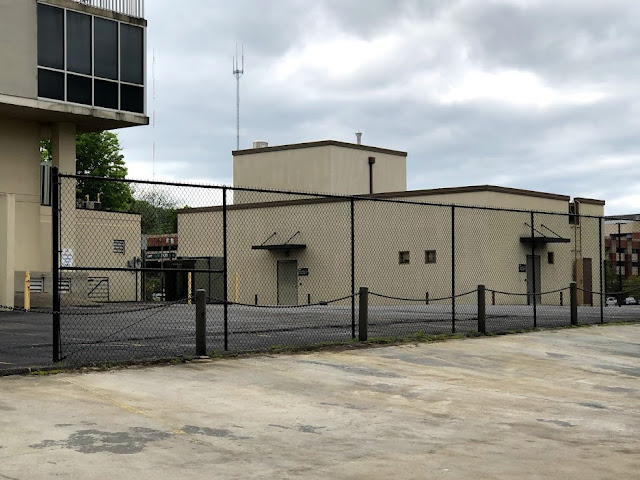 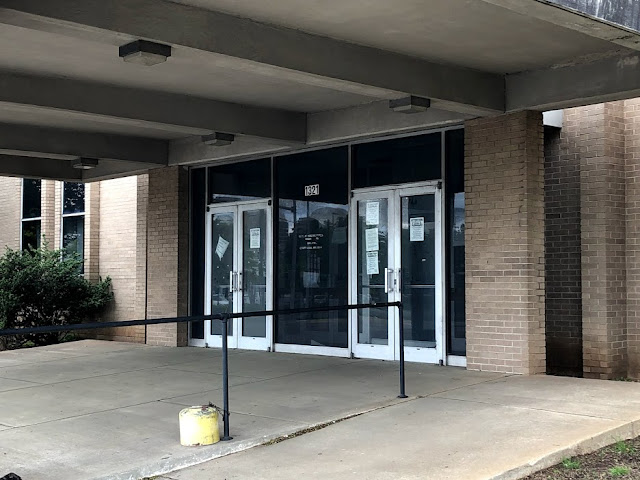 Like many large universities, UAB is constantly purchasing property that comes available near campus. I imagine that happened when this county department moved downtown. I have no idea about the history of this building. The two photos below offer additional views. 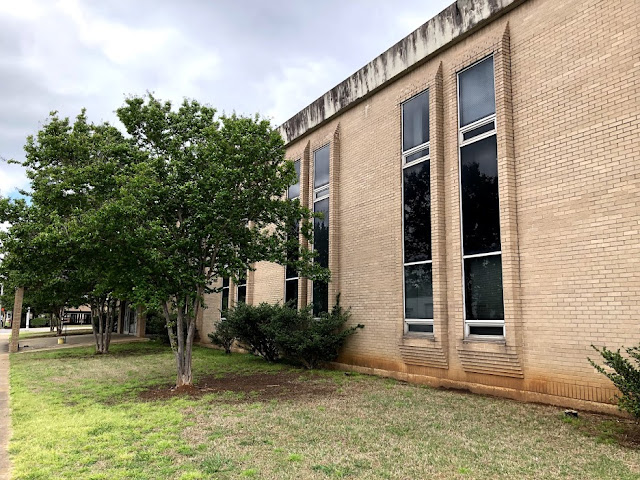 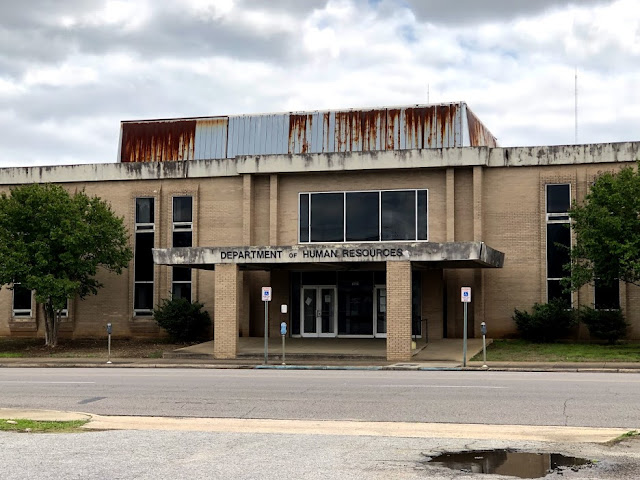 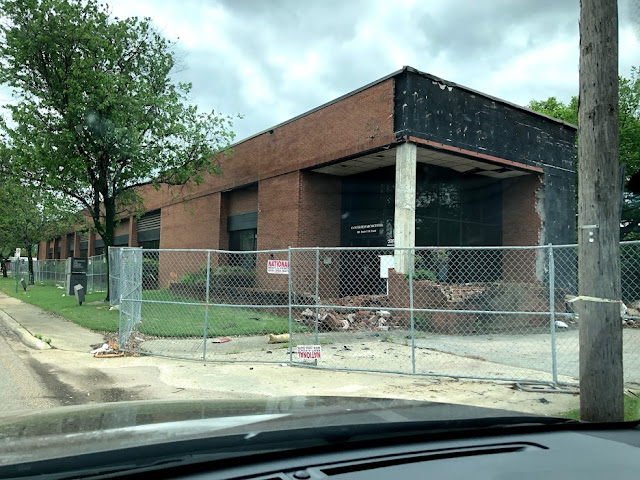 This building on the western edge of campus would seem to date from the 1980's, but UAB obviously has other plans for the site. 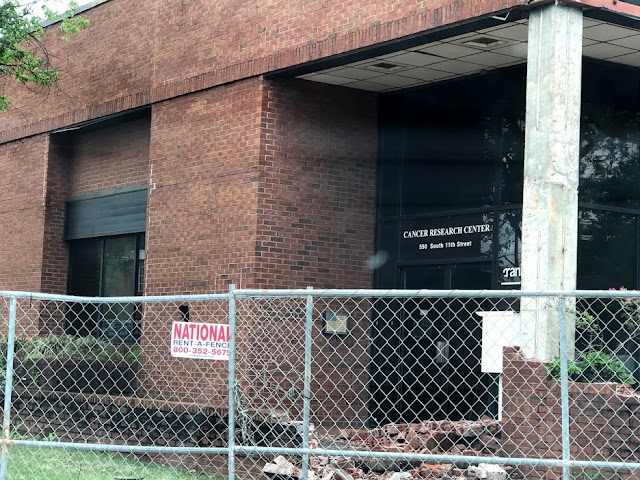 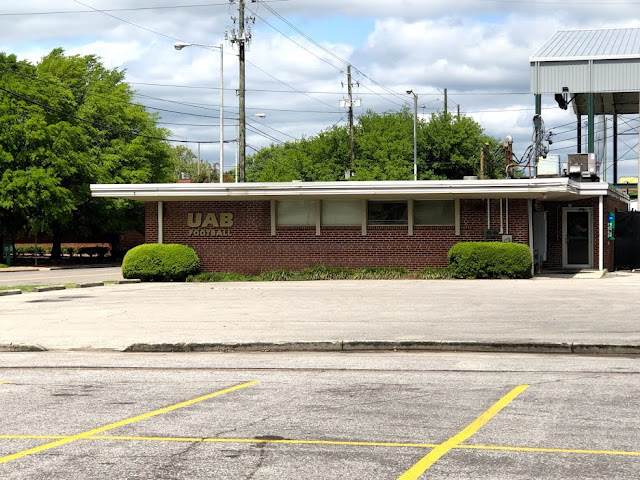 This building and the one below housed the UAB football program offices and locker rooms for some years.

UPDATE 11 August 2019: These two buildings were recently demolished. According to the AL.com article, the building above was once a dentist's office. 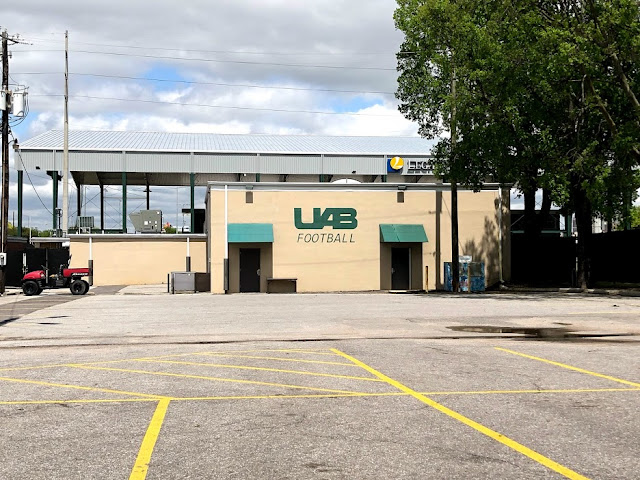 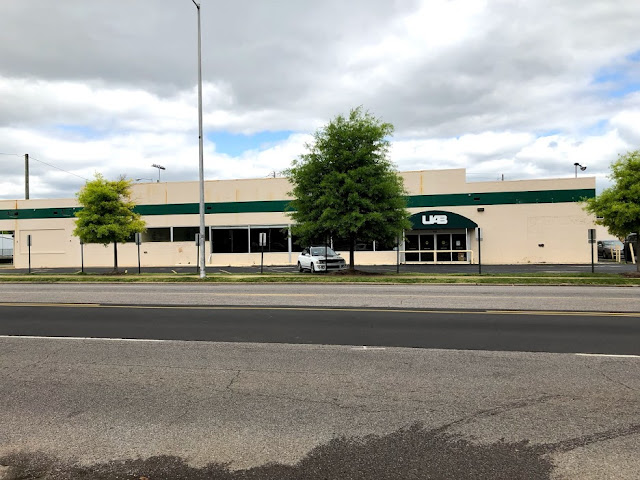 UAB's bookstore moved here temporarily a few years ago while the new student center was built. Before UAB bought the property it was a grocery or drug store, I think.

UPDATE 11 August 2019: This building has been demolished. 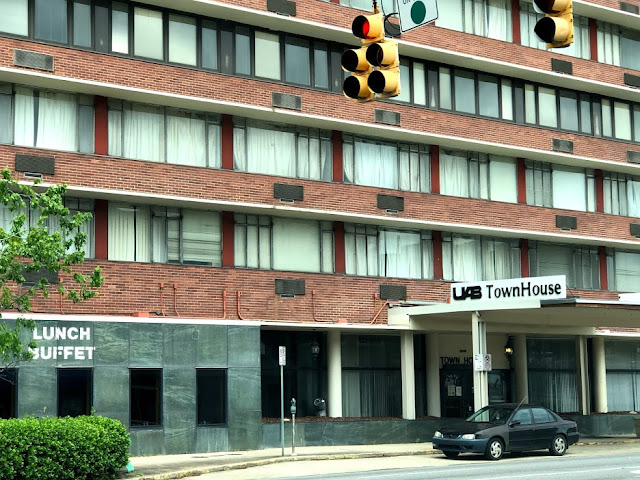 That "Lunch Buffet" sign belongs to the Sitar Indian Cuisine restaurant at the corner of University Boulevard and 20th Street. When I started work at UAB in 1983 and for some years afterward a drug store was located in that space.

Purchased by UAB in 1985, the building was constructed in 1950-51 as apartments with retail space on the ground floor. Other business tenants have included Tracy's Cafeteria--I ate there a number of times over the years.

UAB has used the facility for extended-stay patients from out of town who require ongoing care. Improved facilities will be provided for those patients. UAB is assisting Sitar in finding a new location. 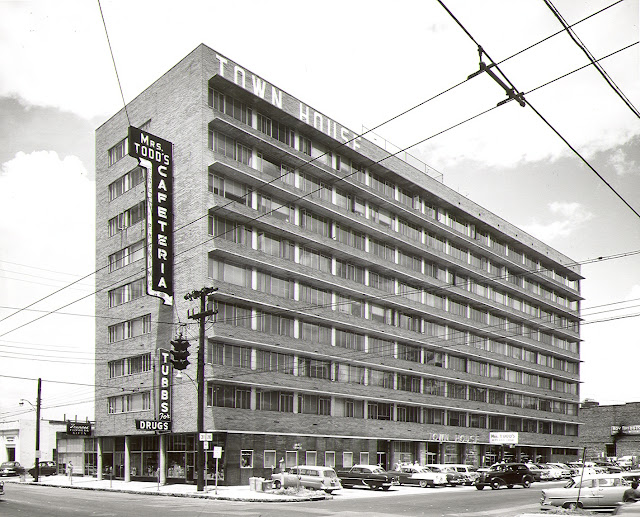 Posted by AlabamaYesterdays at 10:14 AM