Dianne and I recently spent several days in Savannah, Georgia--our first time to visit the city. We stayed in a wonderful bed and breakfast, the Foley House Inn, and never left the surrounding historic district. That area is full of iconic buildings with rich pasts, parks, museums, quirky shops and great restaurants and ends to the north at the waterfront along the Savannah River. We had a wonderful time and hope to go back sometime soon!

Fans of Alabama author Winston Groom's novel Forrest Gump or the Tom Hanks film adapted from it may know that some of the movie was shot in Savannah. From the city's founding in 1733 by General James Oglethorpe, Savannah was laid out in a series of squares, four originally and currently 22 in the historic district. Right across from our b&b was Chippewa Square, named to honor American soldiers in a Revolutionary War battle. This square is dominated by a large bronze statue of Oglethorpe facing south with sword drawn to repel enemies from Spanish Florida. The statue was erected in 1910.

The park bench scene that opens Forrest Gump was filmed on the north side of this square (or maybe the south side; sources differ). Much of his wisdom is forthcoming while he's on that bench. Naturally, the bench was a fiberglass movie prop, since in the movie Forrest faced the street and the actual benches in Chippewa face inward. The Gump bench is on display at the Savannah History Museum. I wonder how many people--like us--come to the Savannah historical district expecting to see the actual bench? Maybe the powers that be should put a replica of the prop in Chippewa Square.

More comments are below.... 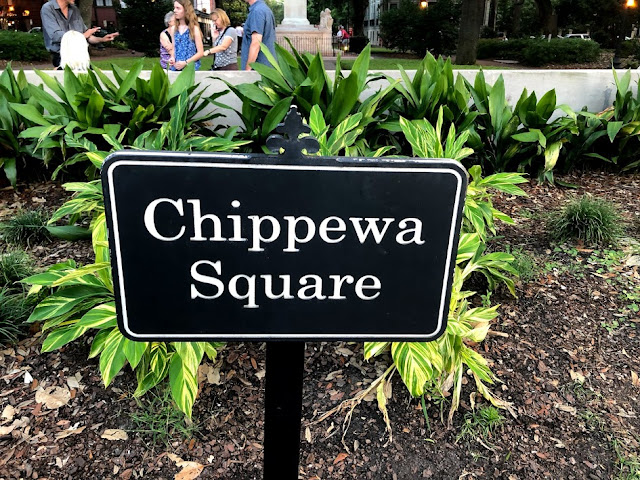 Across the street from Chippewa Square is the Savannah Theatre, which opened on December 4, 1818. The facility is described as "America's oldest theater". 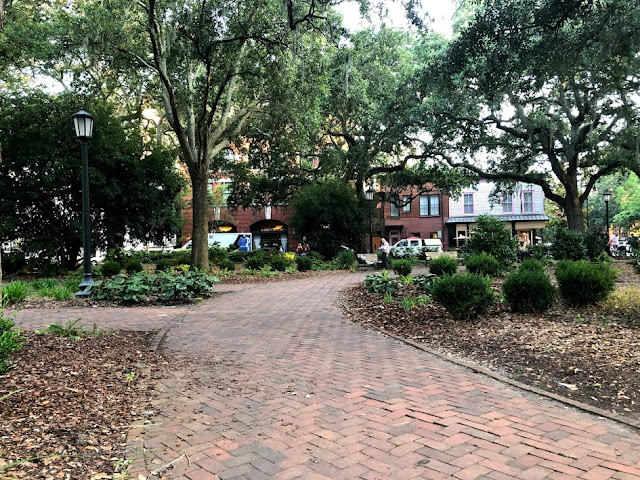 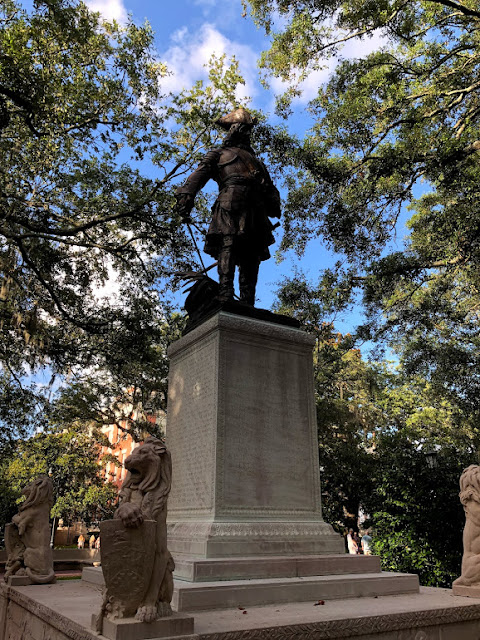 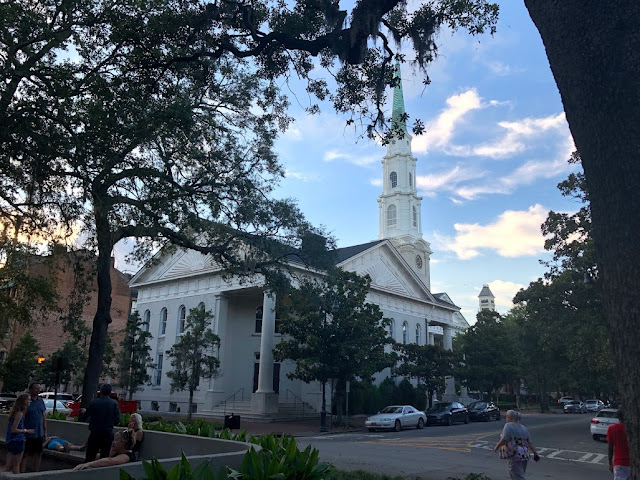 Independent Presbyterian Church is right next to the Foley House Inn and across the street from Chippewa Square. This building was constructed in 1891; the congregation is much older. At the beginning of the movie a feather floats down to land at the bench; this church is visible in the background. 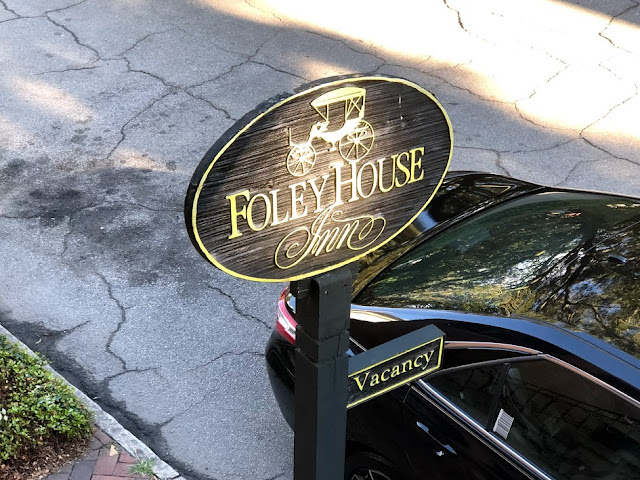 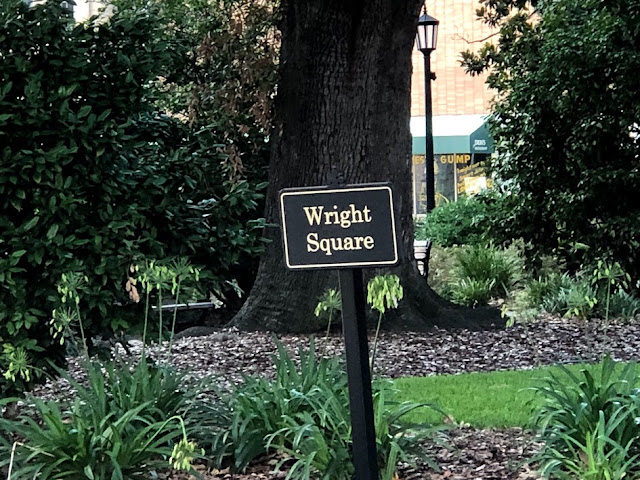 Less than two hours after we arrived in Savannah we found the square they were so nice to name after us!

Well, not really. The square's current name honors James Wright, one of Georgia's royal governors. This square has a monument to Tomochichi, a Creek leader and friend of Oglethorpe's. 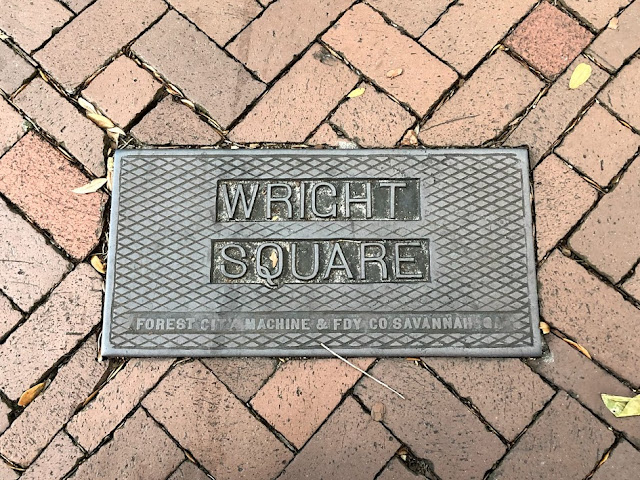 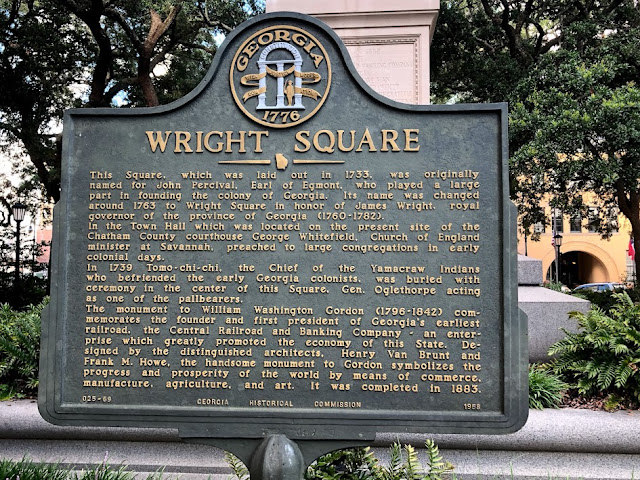 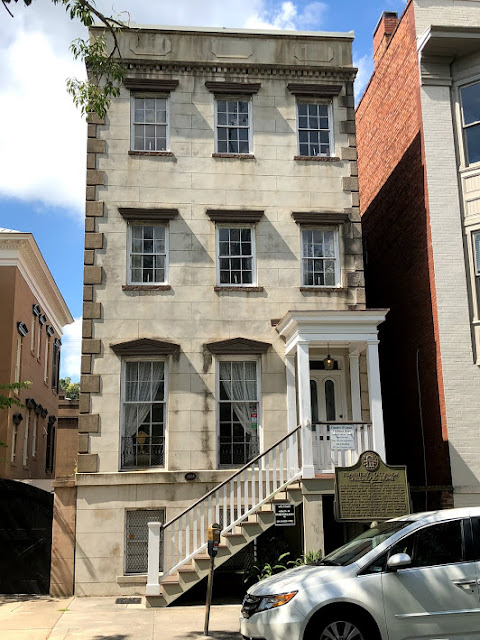 Flannery O'Connor is one of Georgia's best known writers; her works include the short story collections A Good Man is Hard to Find and Everything That Rises Must Converge. She was born in Savannah and lived there until she was about 15. You can visit her childhood home. We didn't have time to tour it; hopefully we will on some future visit! 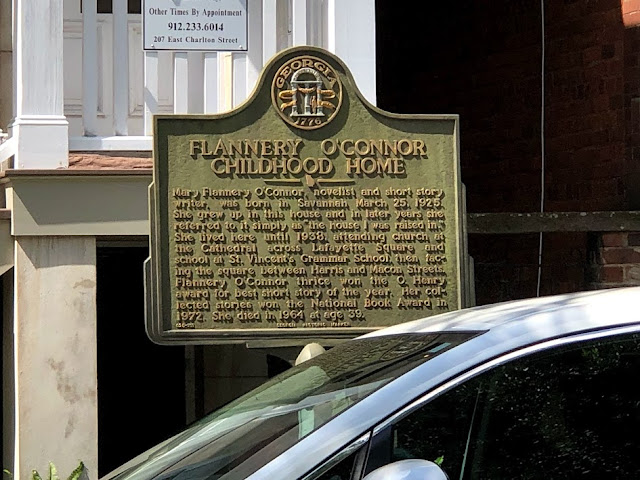 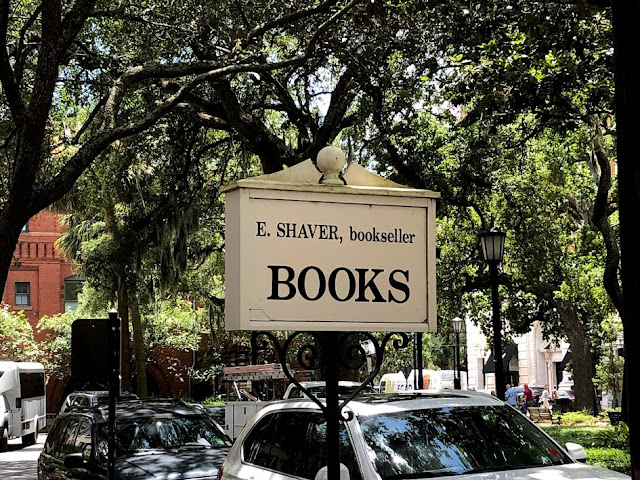 We found this very nice bookstore in the historic district. 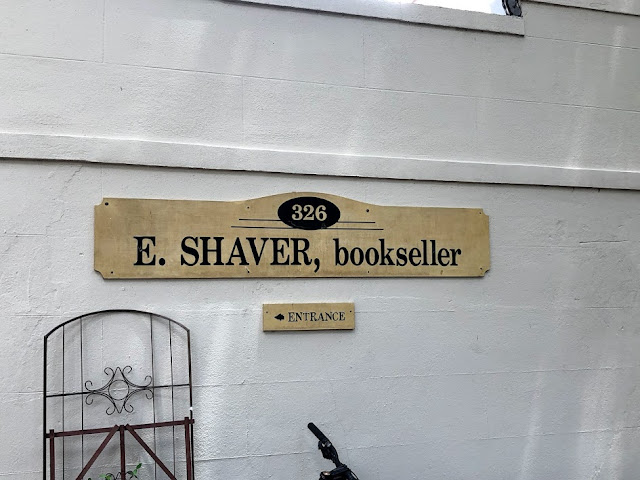 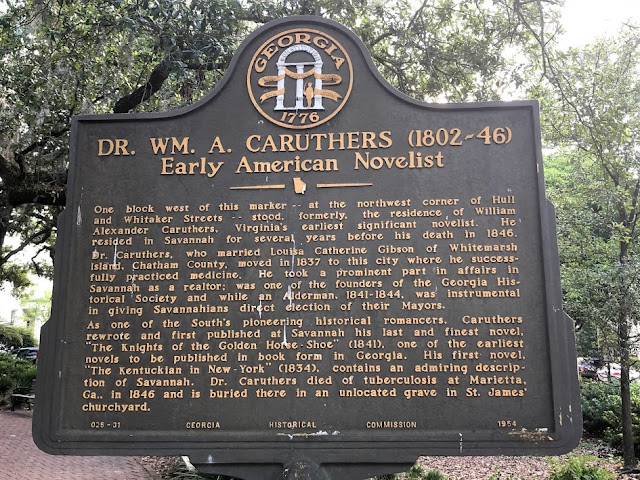 Caruthers was an early American novelist born in Virginia. He spent the final decade of his life in Savannah. 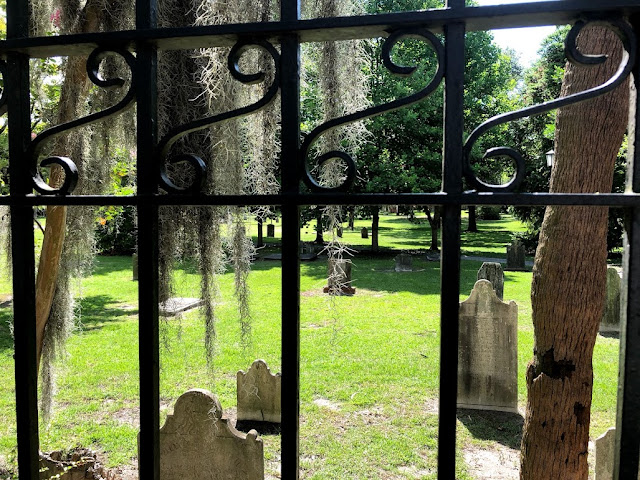 We often spend time in cemeteries when we travel. In Savannah we peaked into  the huge Colonial Park Cemetery. 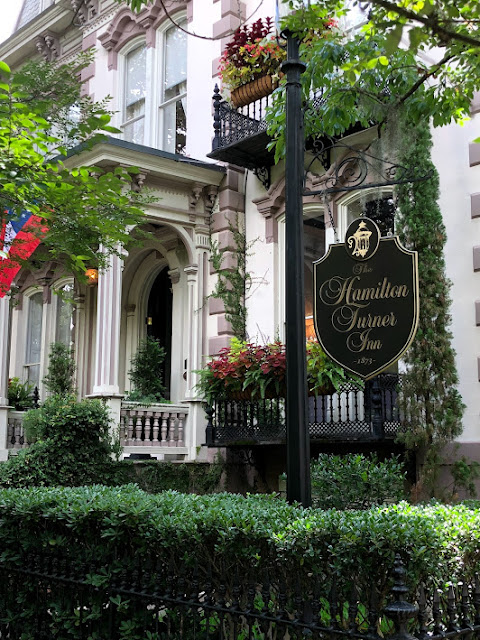 The historic district is full of wonderful restored homes and businesses. 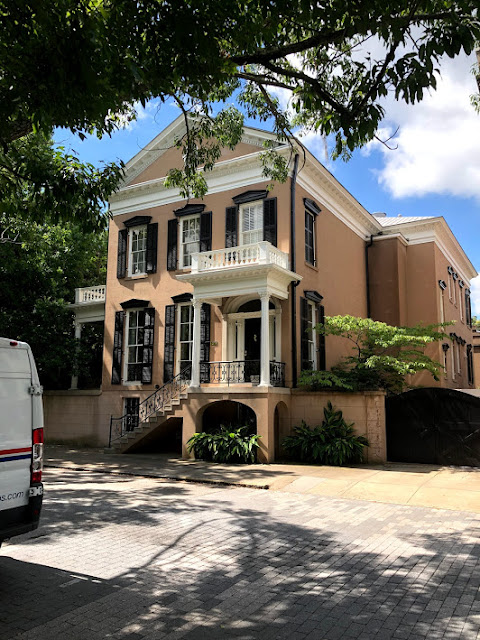 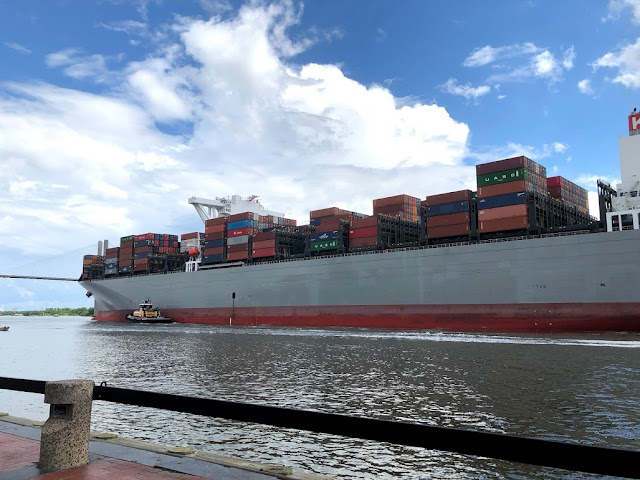 Some big ships move up and down the Savannah River. They call the port "The Largest Single Container Terminal in North America". 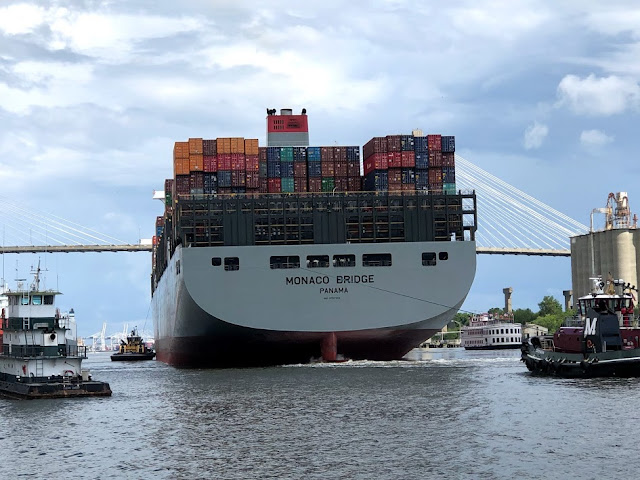 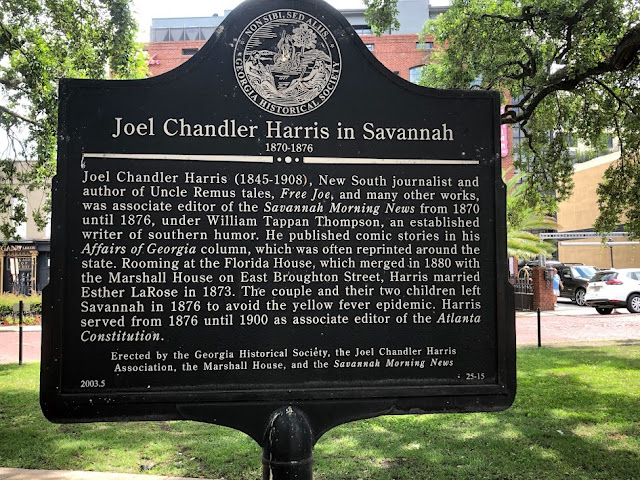 Another writer associated with the city is Joel Chandler Harris, a journalist, fiction writer and folklorist. Most famous for his Uncle Remus tales, Harris spent most of his career in Atlanta, but lived for a few years in Atlanta. 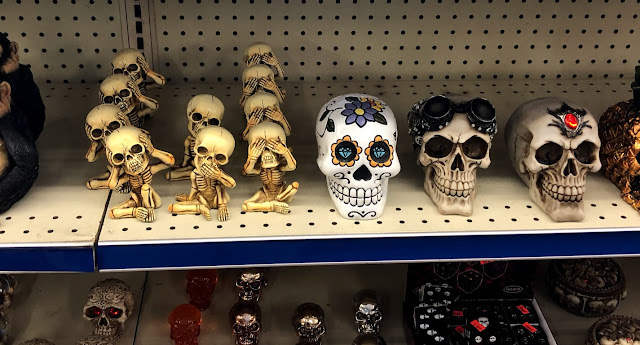 On July 4, we drove up from St. Johns, Florida, to Savannah and somewhere in southeast Georgia ended up at a gas station/convenience store offering these goodies. Only in America.... 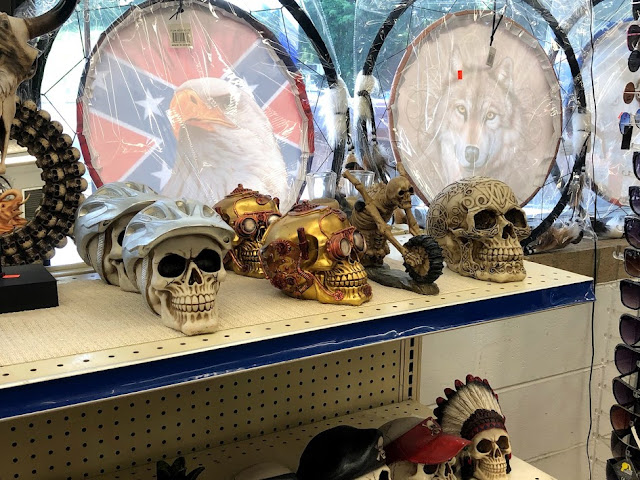 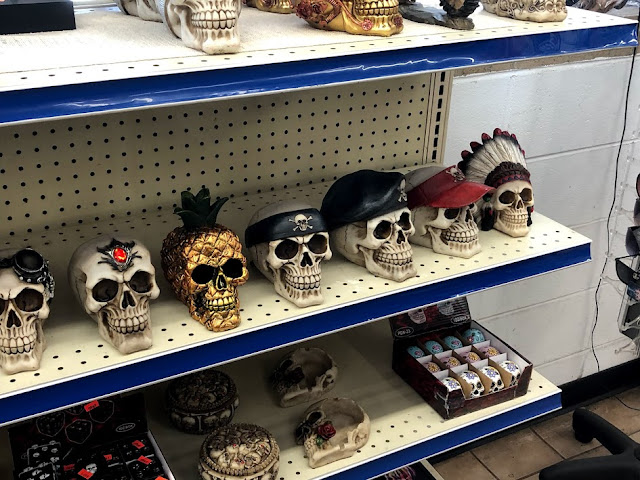