A Visit to Demopolis

In March 2018 Dianne and I went to New Orleans to visit our son. On the way back to Pelham we took a detour and spent the night in Demopolis so we could visit the spectacular structure that is Gaineswood. I'll be doing a couple of posts on that house museum soon, but in this one I'm covering some other sights in the town.

Demopolis, the seat of Marengo County, was settled in 1817, the same year that Congress created the Alabama Territory. The first arrivals were French immigrants, who had fled to Philadelphia after a slave rebellion in Haiti. The U.S. government granted them 92,000 acres in Alabama if they would grow grapes and olives. This effort, which became known as the Vine and Olive Colony, ultimately failed but Demopolis survived to become a center of the cotton trade in the antebellum period. Today many beautiful homes and other buildings survive in the town.

In a previous post I've discussed The Fighting Kentuckian a 1949 John Wayne film set in Demopolis during the "vine and olive colony" period. The town has also been the birthplace of several prominent people. Although he is associated with Birmingham, businessman A.G. Gaston was born in Demopolis.

Playwright Lillian Hellman based The Little Foxes on her mother's Demopolis family and the play is set there. Alabama actress Tallulah Bankhead starred in the play on Broadway; Bette Davis got the role in the 1941 film version. Hellman's 1946 play Another Part of the Forest is a prequel of sorts to Foxes and is set in the fictional Alabama town of Bowden. That play was filmed in 1948. In 1949 Marc Blitzstein's opera based on The Little Foxes, Regina, premiered on Broadway.

Two authors born in Demopolis are Wyatt Blassingame and James Haskins. In the 1930's and 1940's Blassingame was a prolific writer of fiction for the pulp magazines. In the 1950's as that market dried up, he began writing non-fiction books for young people. He died in 1985. Haskins, who died in 2005, wrote more than 100 books for adults and youth, many of them related to African-American history.

Although she grew up in Mobile, contemporary novelist Michelle Richmond was also born in Demopolis.

Demopolis and Marengo County have numerous properties listed on the National Register of Historic Places; town and county are both rich in historical sites.

Further comments are below many of the photos. 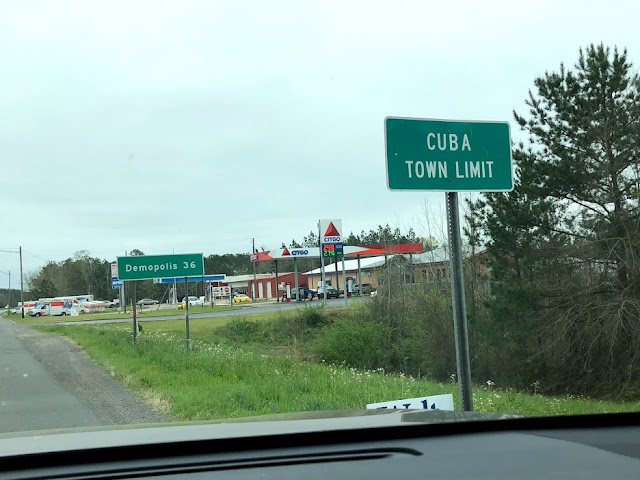 Heading toward Demopolis we passed through a bit of the Cuba community; the town was incorporated in 1890. A post office existed in the area from 1850, and two years later planter R.A. Clay moved to the area with 100 slaves. His plantation acreage later became the town.

Several impressive old homes, churches and a museum are located in Cuba, but we did not get to visit any. 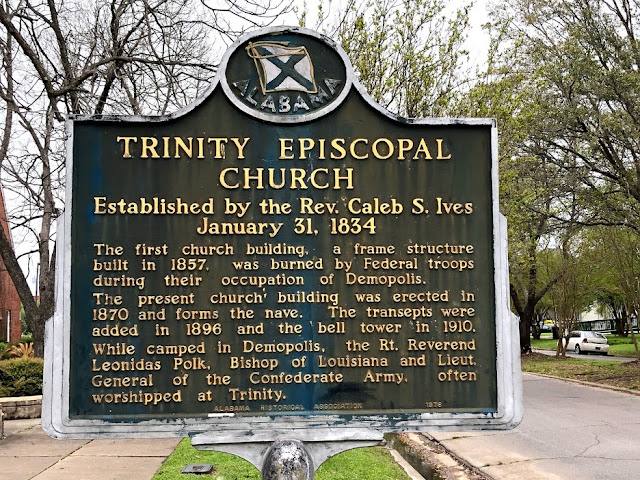 Further church history can be found here. "Trinity is one of the finest examples of Victorian Gothic Church architecture in the United States." 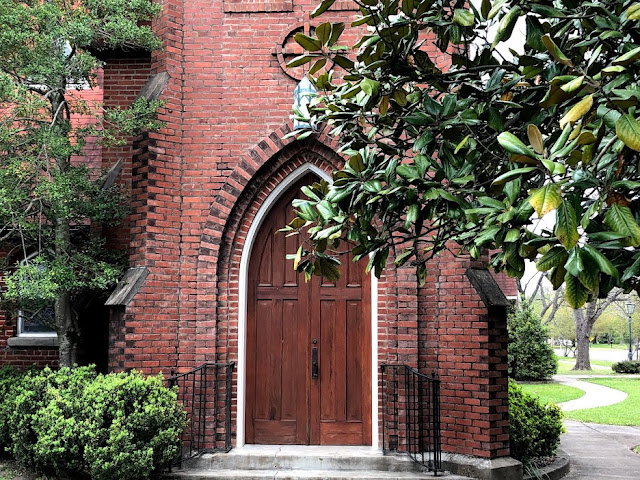 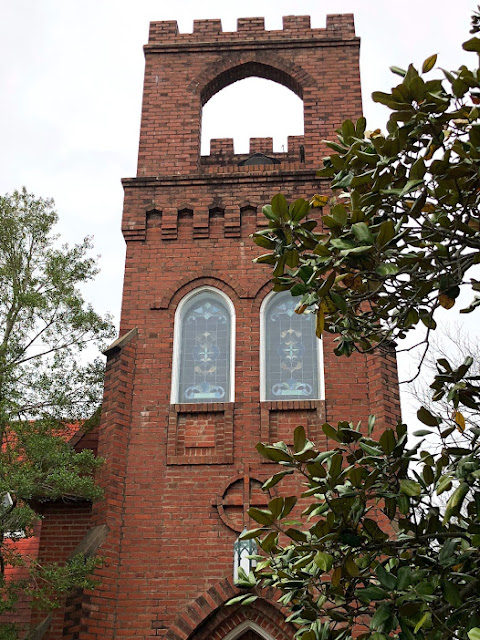 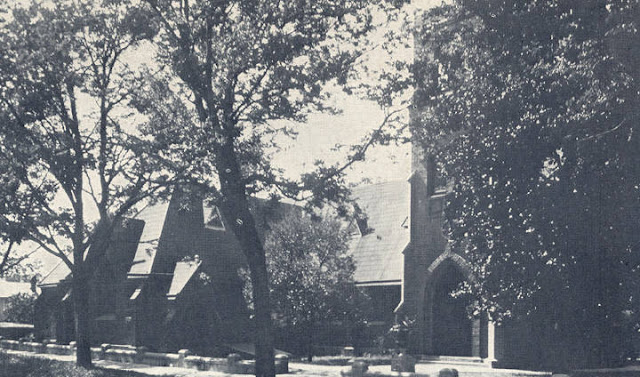 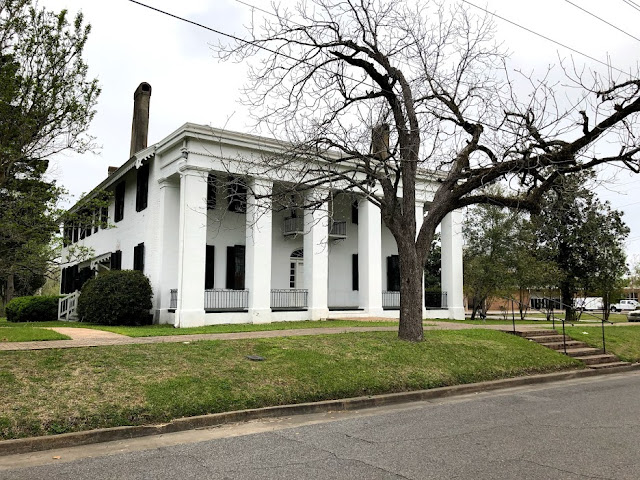 Bluff Hall was built in 1832 by Allen Glover using slave labor and overlooking the white limestone cliffs along the Tombigbee River. The residence, home to Glover's daughter Sarah and her husband Francis Lyon, was expanded n the 1840's and remained in private hands until 1967. At that time the Marengo County Historical Society purchased it and restored the structure to its 1850's glory. The society continues to operate Bluff Hall as a house museum. Unfortunately we did not get to tour it; perhaps next time. 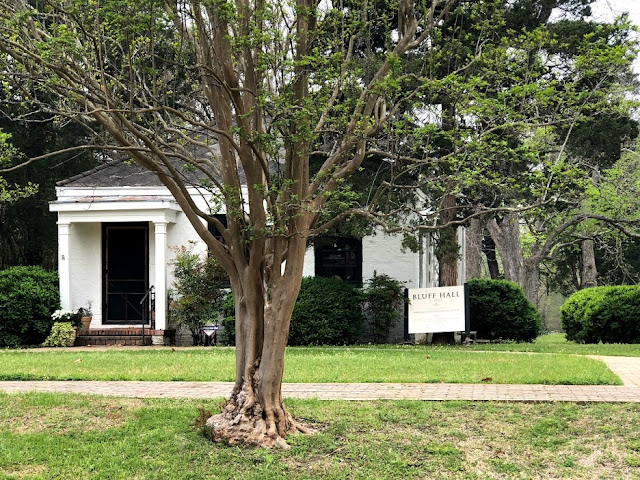 This building sits next to Bluff Hall. 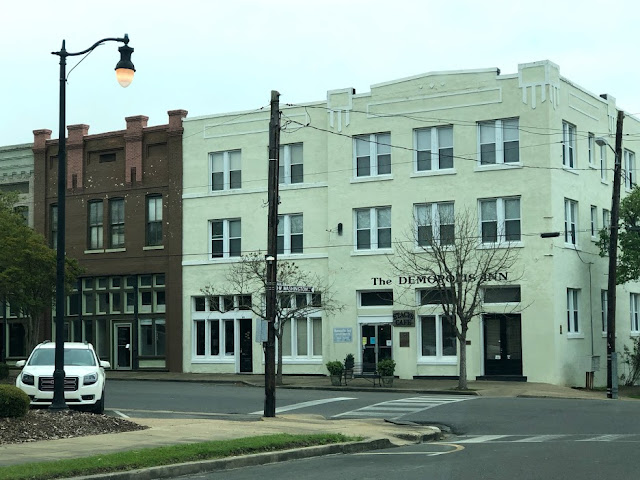 As far as I can determine the Demopolis Inn is not currently operating. 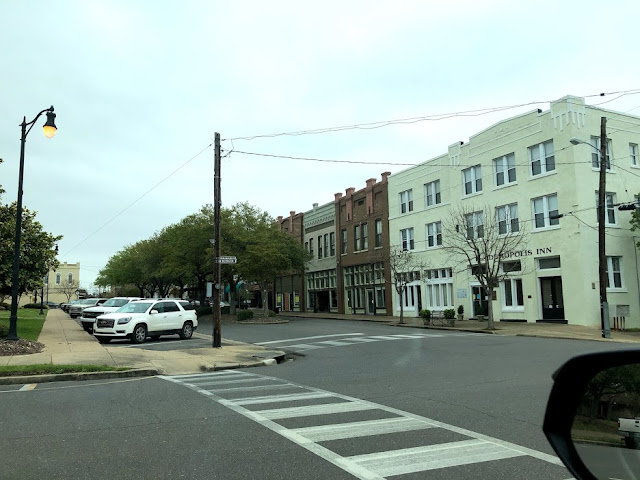 Demopolis Inn building and further down that street 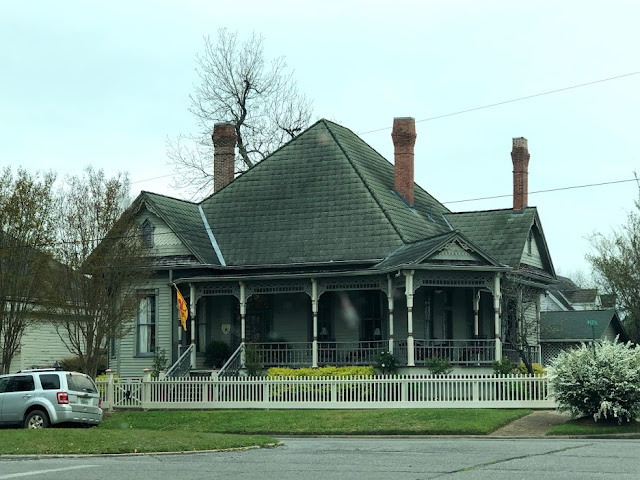 One of the many neat old homes in Demopolis 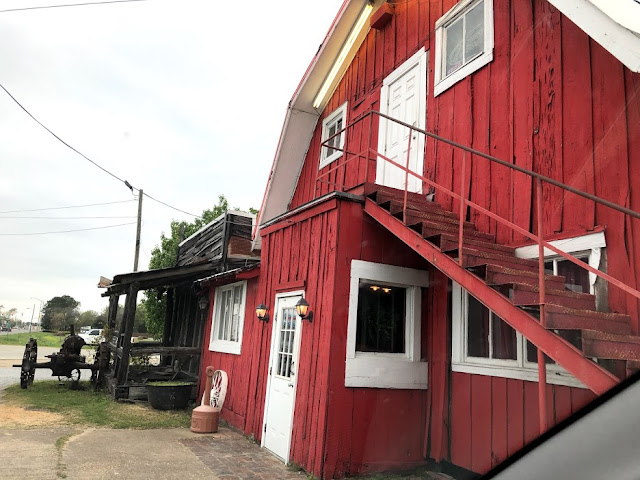 The Red Barn Restaurant has been operating since 1971 and has a very visible exterior. You can learn more about it at the Rural Southwest Alabama site. 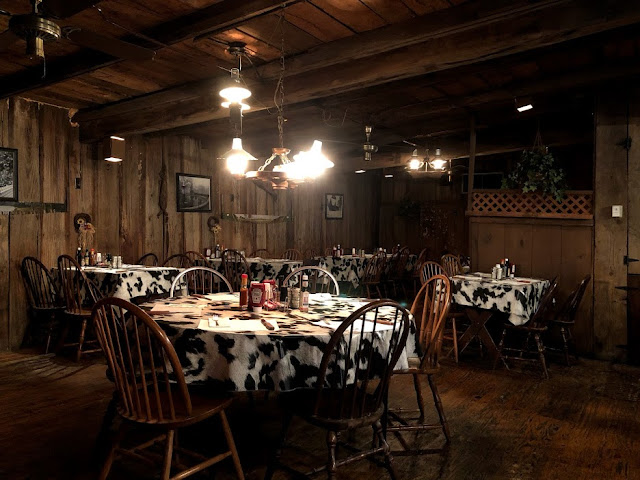 The food was excellent! 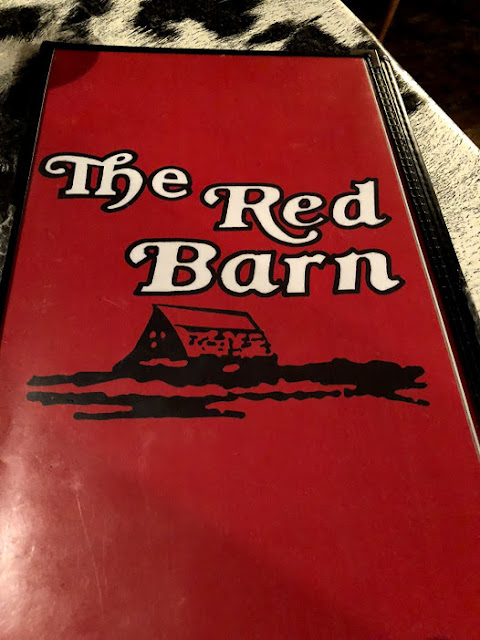 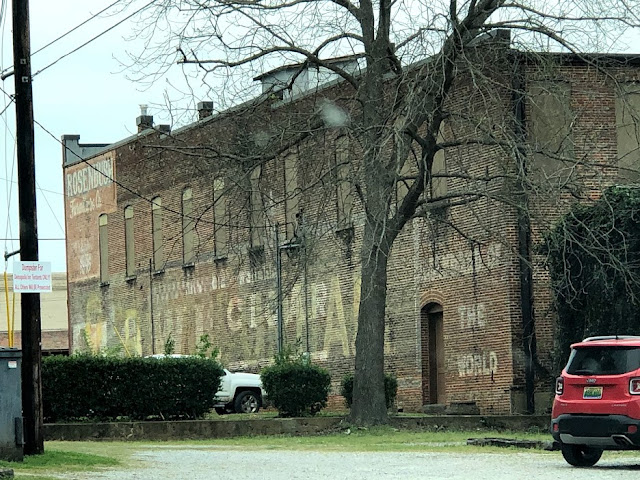 One of Demopolis' most prominent Jewish businessmen was Julius Rosenbush, who arrived in the city in 1894. He founded the Rosenbush Furniture Company, which the family operated until 2002. The property was then donated to the Marengo County History and Archives Museum Foundation. 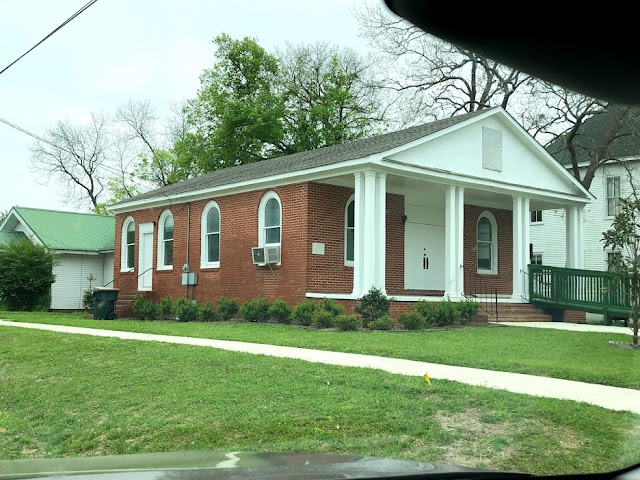 Established in 1858, this Jewish congregation in Demopolis was the fourth one established in Alabama. The temple had about 150 members in 1929, but that number declined until it became inactive in the 1980's. In 1989 the title to this property was transferred to Trinity Episcopal Church which continues to maintain it. 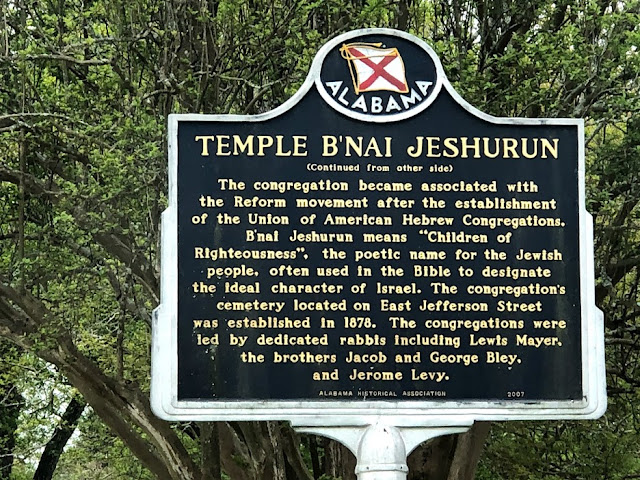 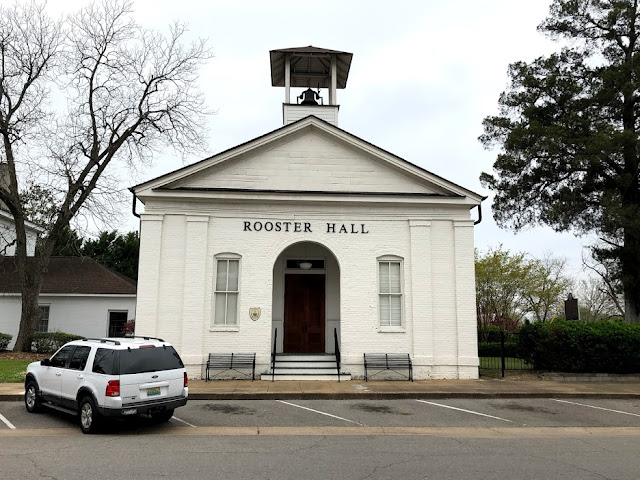 "[Rooster Hall] is one of the oldest buildings in Demopolis. It was built in 1843 by the Presbyterians of Demopolis using locally-made bricks. It served as their sanctuary until after the Civil War. During the reconstruction period, a garrison of Federal troops, stationed in Demopolis, moved the county seat from Linden, AL, and used this building for a courthouse. The building served as the Marengo County Courthouse through Reconstruction. The county seat returned to Linden in 1871 and the building was turned over to Demopolis city authorities.

In 1876 the city leased the building to the Demopolis Opera Association. The Association rehabilitated the building for live performances and public speaking events. The Opera House featured mostly local talent but also featured talents from New York and New Orleans for special performances. The Opera House closed its doors in 1902. Since that time the building has served several other functions including city hall, a fire station, a meeting house and auditorium, voting station, and office building. This building is a contributing property to the Demopolis Public Square which was added to the National Register of Historic Places on October 29, 1975. Rooster Hall is located on the northeast corner of the Public Square at downtown Demopolis." 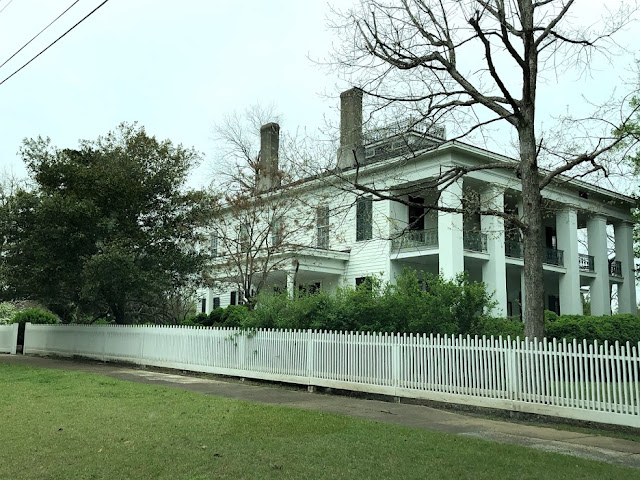 Attorney George Lyon began construction of the Greek Revival Lyon Hall in 1850. He was the nephew of Francis Lyon of Bluff Hall. Construction continued until 1853; then Lyon and his wife journeyed to New York City to find furnishings. Family occupied the house until 1996; it was donated to the Marengo County Historical Society the following year. 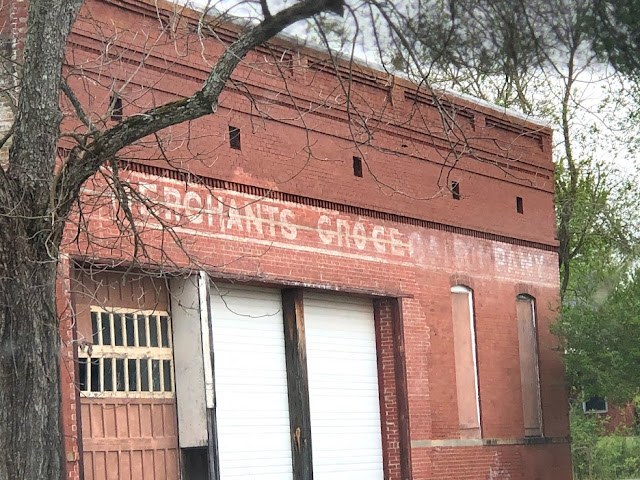 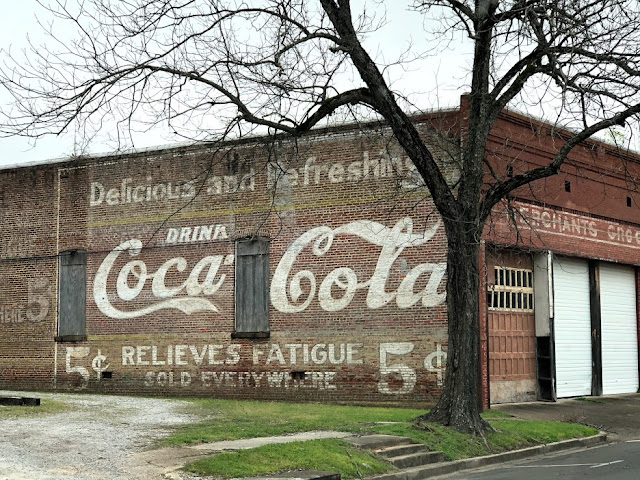 Posted by AlabamaYesterdays at 10:38 AM