A Visit to Gibson's Bookstore in Owens Cross Roads

Sometimes you find a bookstore in a very unexpected place, and that happened to my younger brother Richard and I back in August when we were tooling around north Alabama heading to Scottsboro. In a Google search I had run across something called West Station Antiques and Gibson's Books in Owens Cross Roads, so naturally we decided to check it out.

We arrived around one on a very hot Friday afternoon. The business is located in a converted garage and has no air conditioning. Co-owner Lonnie Gibson, who told us the shop had once been located in Madison, kindly turned on some more fans for us after we came in.

Despite the heat, Richard and I perused the packed shelves for an hour or so. We both purchased some items. I picked up two collections of short stories by H. E. Francis, an Alabama author, and some old Huntsville postcards.

As you can see from the photos below, the store is crammed with all sorts of goodies. We would like to have stayed longer, but decided to seek the comfort of an air conditioned car and hit the road for Scottsboro. i'll be doing a post on that portion of the trip soon. We hope to return to Gibson's in the winter--on a cloudy day!

Much of the store's inventory and more can be searched on their website. Gibson's can also be found on Facebook and Instagram. The store has a "Large Selection of General Interest Books as well as Magazines, Sheet Music, Postcards and other paper items." That's an understatement!

More comments are below some of the photographs. All photos are mine unless otherwise noted. 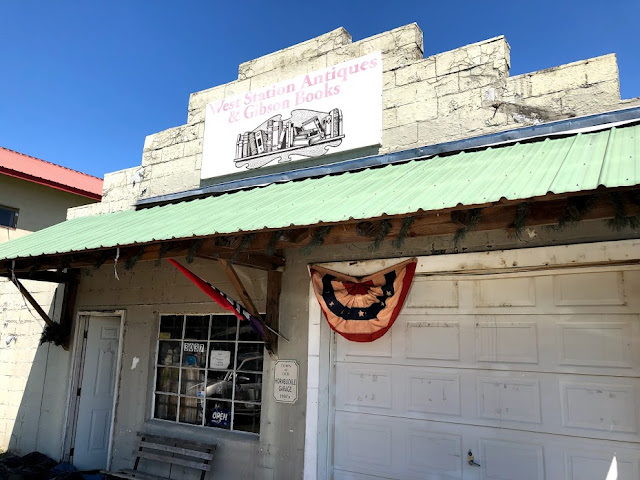 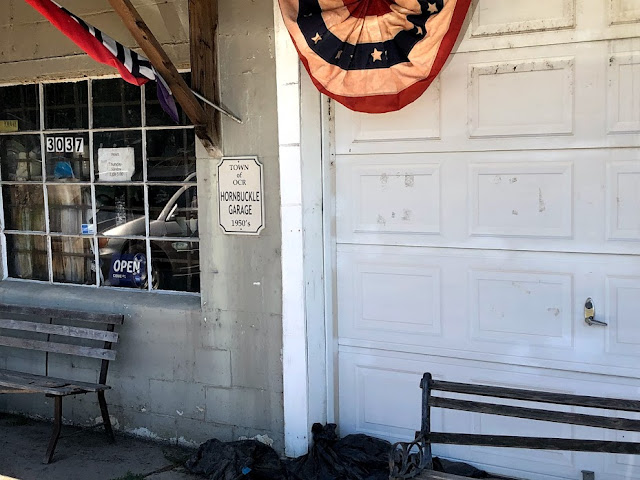 That sign on the wall by the window reads "Town of OCR/Hornbuckle Garage/1950's". There is a Hornbuckle Auto Detailing business in Huntsville on Highway 53; I wonder if there's any connection. 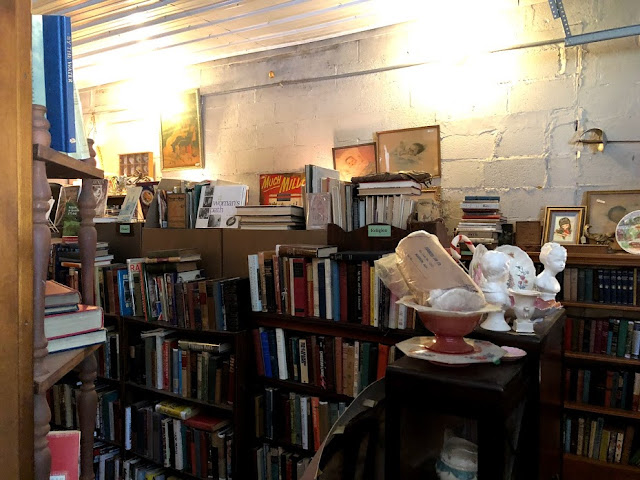 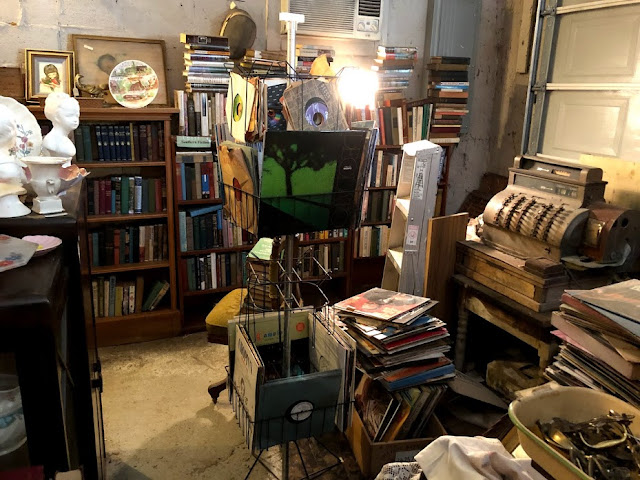 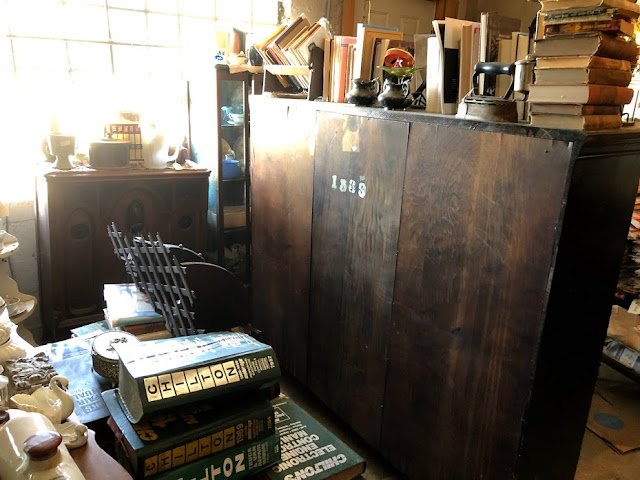 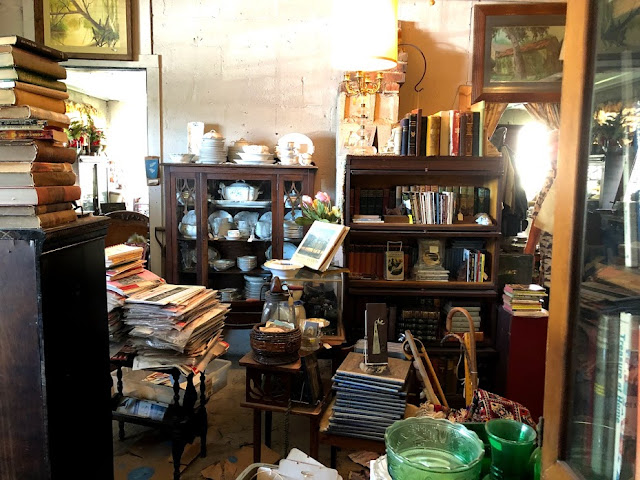 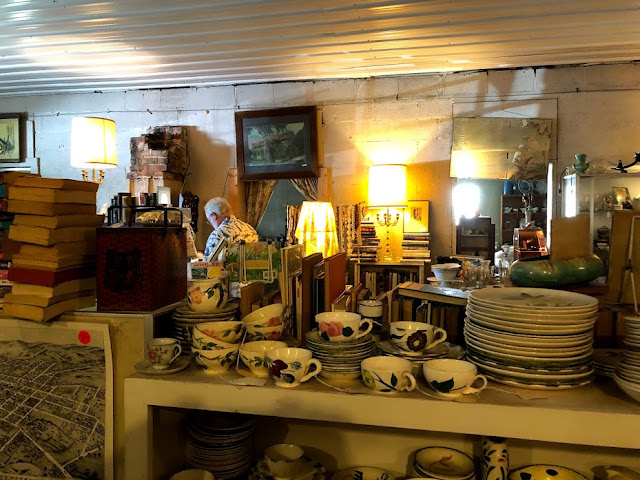 That's younger brother Richard in the background. We've wandered through many bookstores together over the years; Gibson's is one of the most interesting. 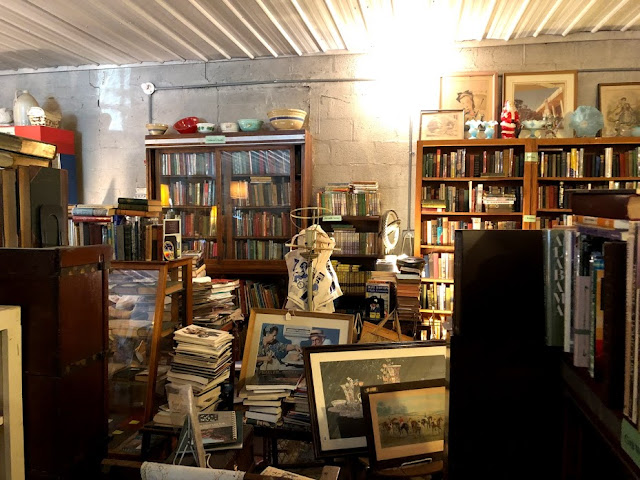 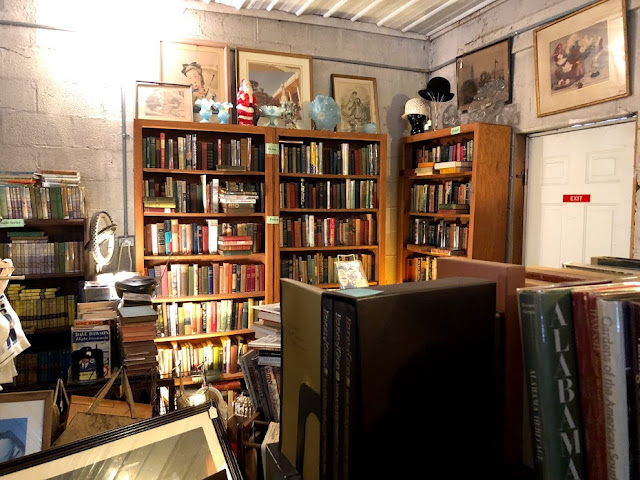 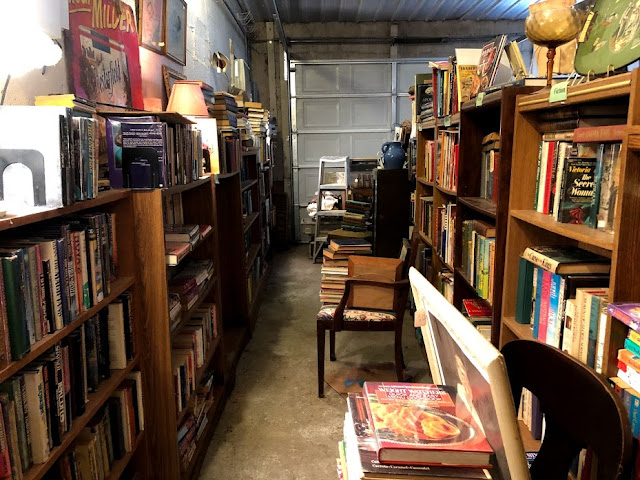 I spent some time on this aisle, which had lots of fiction and poetry. 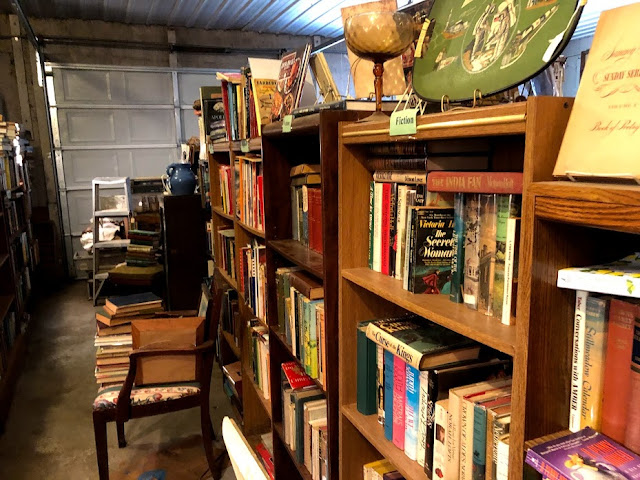 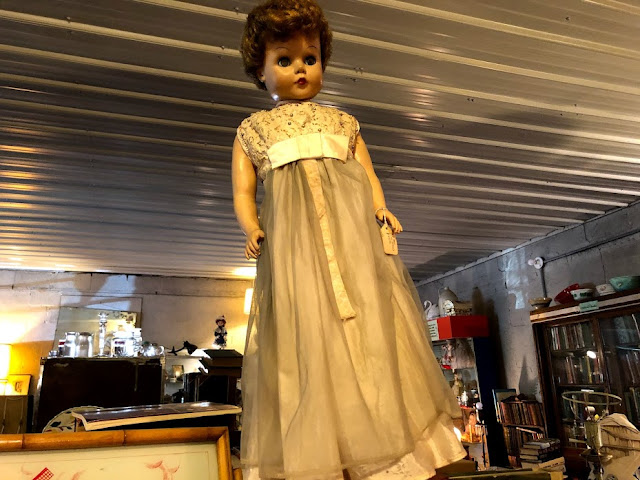 This young lady watches over the inventory. 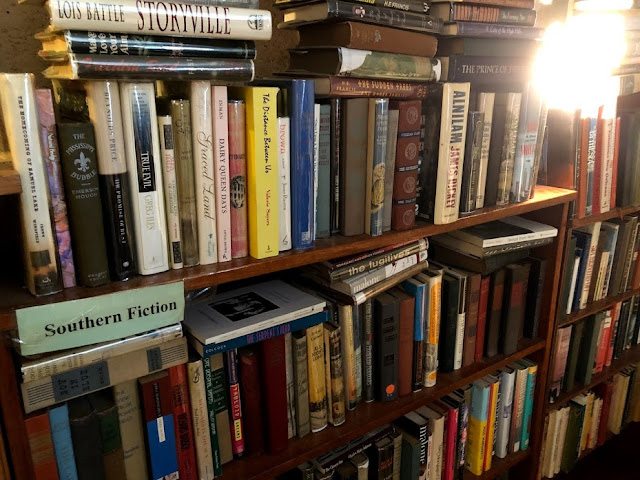 I found the two H.E. Francis short story collections in this section, which I examined carefully. I found many other items of interest in the shop, but these days I try to restrain myself when i enter a bookstore. Sometimes I succeed. 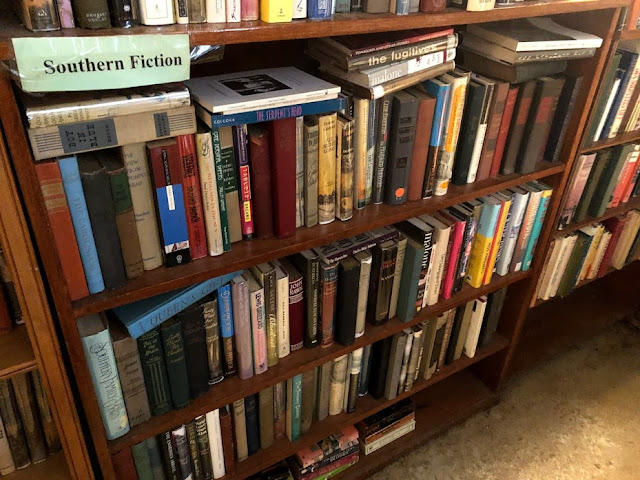 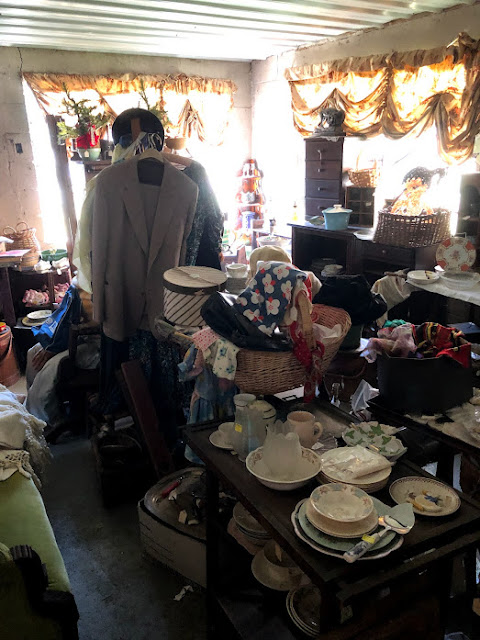 The business occupies two rooms. The books, postcards and a lot of miscellaneous material are in the larger and the "antiques" portion is in the smaller. 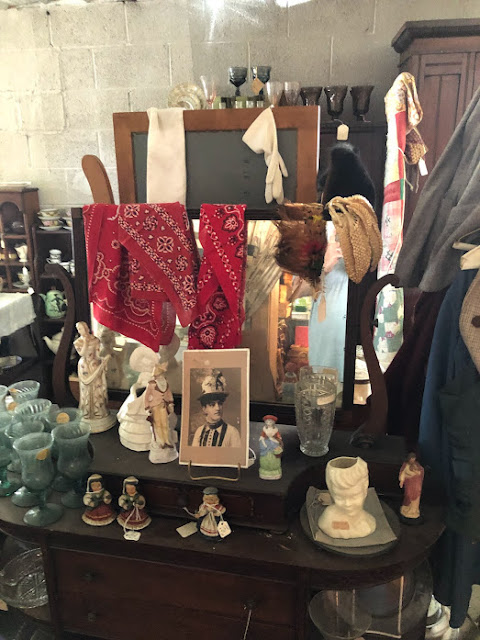 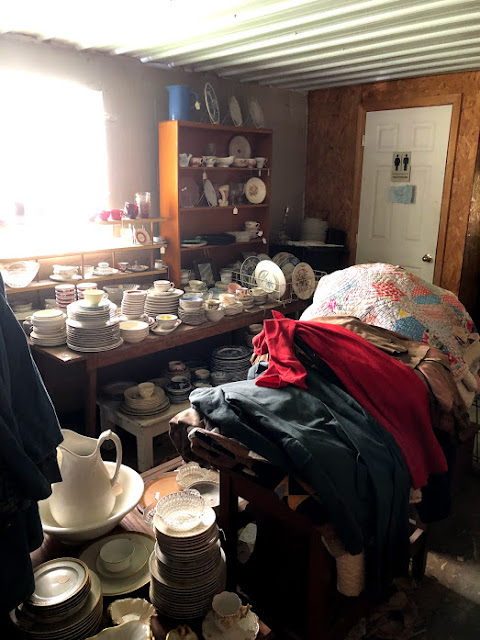 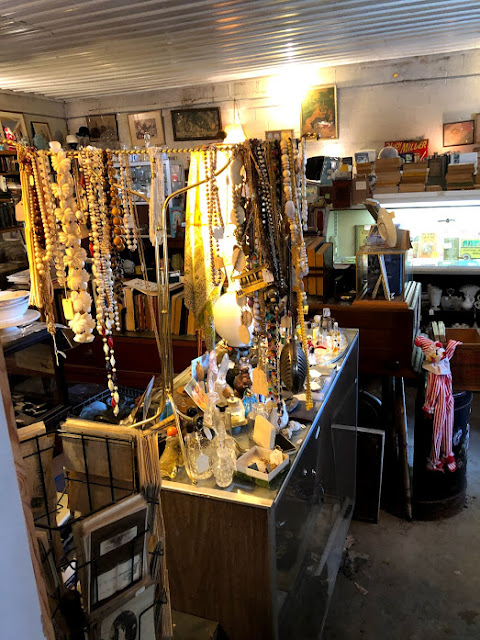 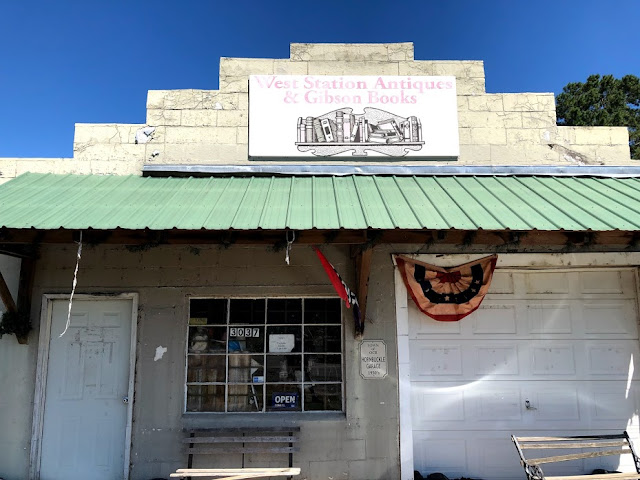 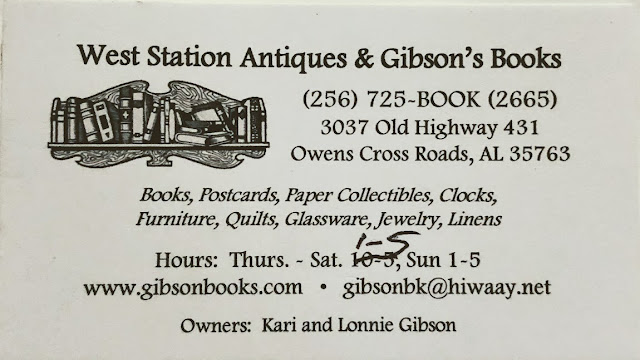 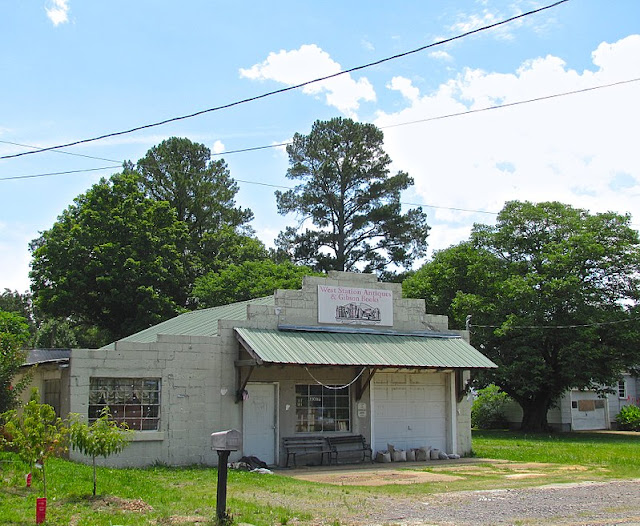 Another look at the front of Gibson's taken by Brian Stansberry

Posted by AlabamaYesterdays at 8:19 AM