Well, the English village of Grantchester didn't actually come to Alabama, but in the TV series by that name one of its two major characters did at the start of season 4. Let me explain.

I've been down this road before on this blog--connections between a British TV show and Alabama. In March I posted about an entire episode of the series Dr. Who set in Montgomery in 1955. This time a group of civil rights activists from "Richmond", Alabama, visit Grantchester. They mention that a young man has been lynched there recently for offering a soda to a white girl. This season is set in 1956.

As often happens in this show, a murder occurs, and the two main characters, Detective Inspector Geordie Keating and the Anglican vicar Sidney Chambers are on the case. After all, this show does run under the banner of PBS' "Masterpiece Mystery" program.

Grantchester premiered on the British ITV network in 2014. The source is The Grantchester Mysteries series of short story collections by James Runcie. So far six collections have appeared between 2012 and 2017. Four seasons of the show have been released in Great Britain and the U.S. and a fifth is planned.

Geordie is married with kids and is a good but prickly cop. Sidney is single, a jazz buff who drinks too much and has periodic crises of faith. Oh, and he's a lady magnet, which means his life as a vicar pretty much stays in turmoil about one thing or another. Geordie, the vicarage's housekeeper Mrs. Sylvia Maguire, and the gay curate Leonard Finch have to help him out between crime solving episodes. Sidney does prove invaluable to Geordie in that area

This first episode of season 4 has the usual mix of story lines involving Geordie and Sidney's personal lives and the murder that occurs. An additional element is the presence of the American civil rights workers, one of whom is the Reverend Nathaniel Todd. Sidney attends his lecture and meets his daughter, Violet Todd. The presence of the civil rights workers ignites prejudice in Grantchester, and at first the murder seems related.

I'll leave the story there and not spoil the crime's solution. However, in all this turmoil, Sidney and Violet have become attracted to one another. Sidney had already resigned his post at the end of season 3, so he decides to leave England and go to Alabama with Violet. He helps Geordie solve one more case in episode 2, and then the character departs the show. In the first episode we've already met the Reverend Will Davenport, who will be chosen as the new vicar and Geordie's new partner in crime solving.

I enjoyed season 4 of this show as well as the first three, although James Norton as Sidney is missed in the later episodes. Yet Tom Brittany as Reverend Will is a worthy successor.

You can read a detailed recap of Episode 1 here.

As did the Dr. Who entry mentioned above, this episode does a good job of working real history into a fictional narrative. I haven't read James Runcie's stories, so I have no idea if this tale is told in any of those. 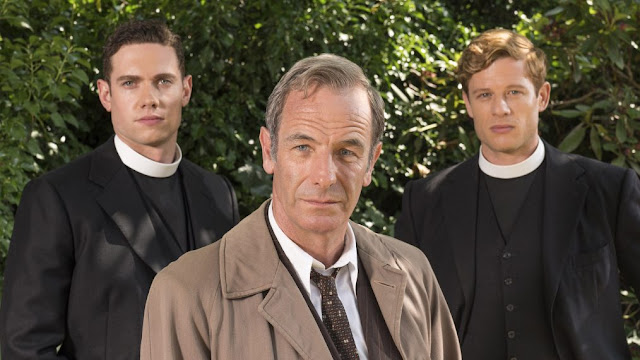 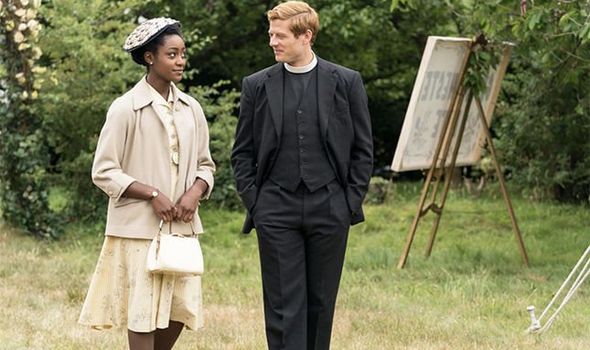 
Posted by AlabamaYesterdays at 9:39 AM