"Save the child if you would save the state": Newsboys in Birmingham in 1922

Serendipity can be a wonderful thing. Working on another project recently, I stumbled across an online volume of a quarterly magazine called The American Child, “A Journal of Constructive Democracy” published by the National Child Labor Committee and selling for 25 cents per copy.

Murphy, who died in 1913, was an author and rector of St. John’s Episcopal Church in Montgomery; he had suggested a national organization in a pamphlet he published in February, 1904. The last decade of his life was devoted to efforts in education and social work. One of his books, Problems in the Present South, first appeared in 1904, with a second edition in 1909. The NCLC is still active today with headquarters in Manhattan. The American Child began publication in 1919 and lasted until 1967. 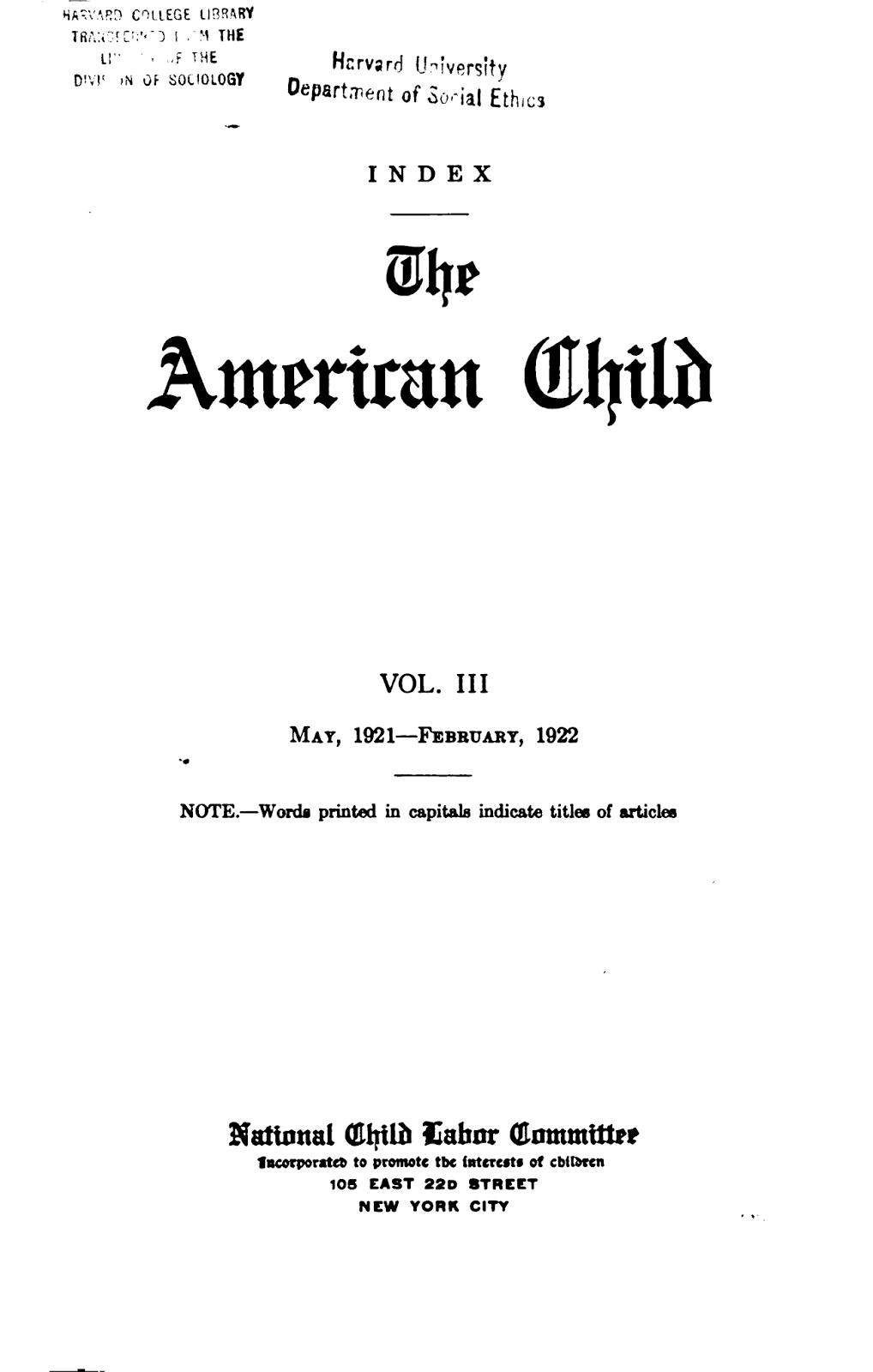 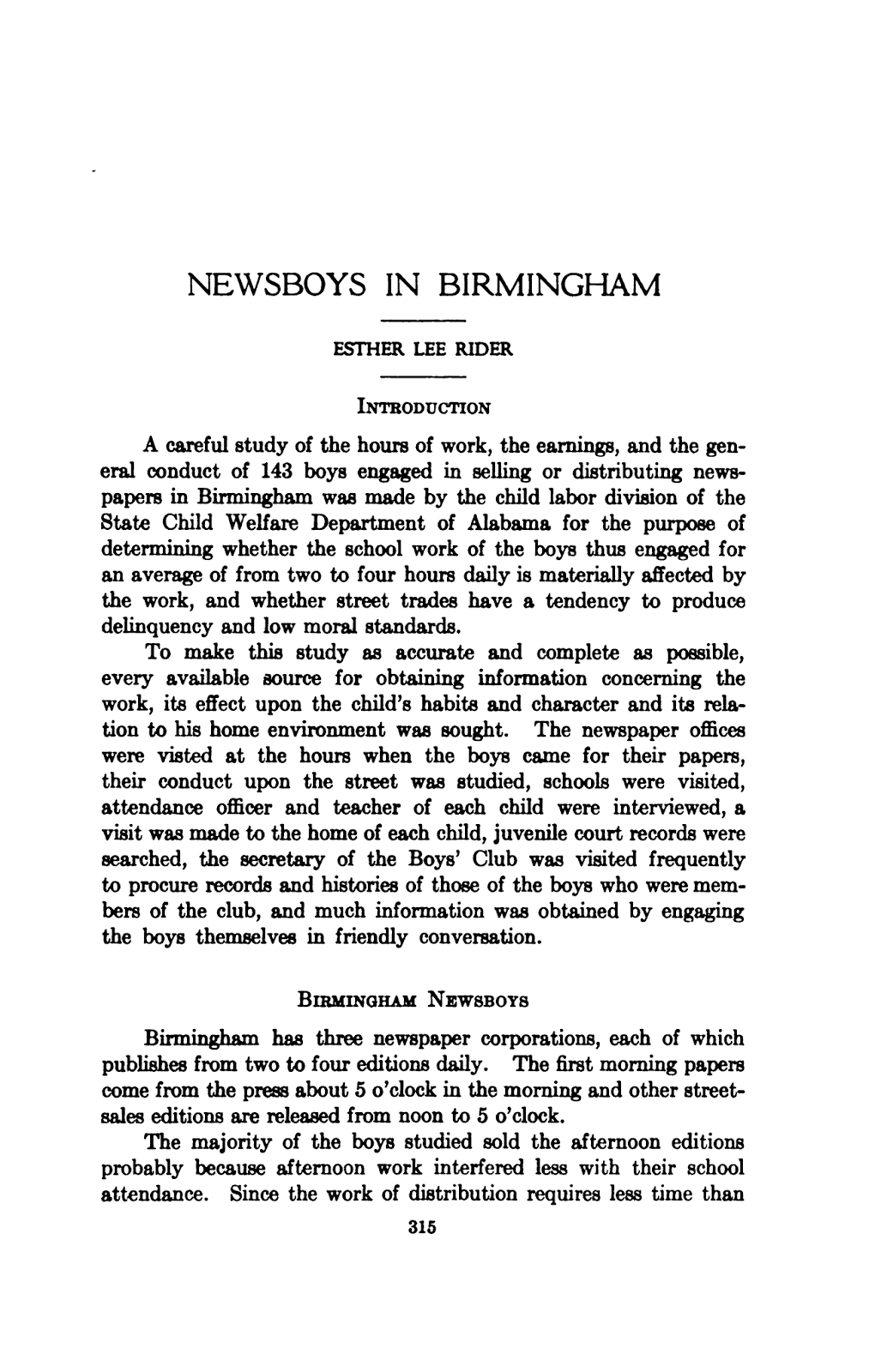 Volumes 3 and 4 from the early 1920s can be found online at Google Books. In the last issue of volume 3, from February 1922, is a fascinating article by Esther Lee Rider, “Newsboys in Birmingham” [pp 315-324].  At the time, Rider was a Child Labor Inspector for the Alabama Department of Child Welfare. She studied the hours, pay and “general conduct” of 143 young men who spent two to four hours daily selling or distributing newspapers in the city. She wanted to know if that work affected their schooling “and whether street trades have a tendency to produce delinquency and low moral standards.”

In 1922 three daily papers in the city published two to four editions each day. Morning papers rolled off the presses about 5 o’clock and the afternoon ones appeared between noon and 5 p.m. Most of the boys Rider studied, 107, were street sellers and most of them sold afternoon editions, which disrupted their schooling less. The others distributed morning or afternoon papers for some of the 150 or so men who as district carriers were responsible for getting papers to subscribers. Rider only studied boys who had “badges” under the Alabama child labor law; how many other unlicensed children were employed as newsboys is unknown.

That law allowed children in the “street trades” to work only between 5 a.m. and 8 p.m. Alabama had passed its first child labor act in the 1886-7 session. The 1915 act prohibited boys under 12 from selling papers and under 10 from distributing them; girls under 18 were not allowed to work in any street trades at all. Boys under 14 could not work during the hours that their local public schools were in session. In her research, Rider bought papers from newsboys as early as 3 a.m. and as late as 10:30 p.m. Many of the boys admitted to her they worked past 8 p.m. if they had not yet sold all their papers.

Rider’s article covers many other aspects of the newsboys’ working lives. She examined how long they had been on the job and how much they made. “Although one boy said he made $20.00 a week,” she wrote, “the average earnings of the 107 boys studied [who sold papers] were $6.50 a week or 93 cents daily.” Very few individuals saved any money at all. She outlines a typical daily schedule for the boys and how they spend their earnings. She looked at school attendance and grade records for all of the boys, and found “Promotion uncertain” for 72 and 24 percent of the sellers and distributors respectively.

Rider examined the family status of each boy, and how many engaged in such activities as smoking, gambling, truancy, using vulgar language and staying out at night “habitually.” She noted that one boy stayed out all night if he didn’t make his quota and thus avoided his father’s beating. She also describes the recreational activities and juvenile court records of the newsboys.

Her conclusions note the poor savings rate, the inability of many boys who work to do well in school, poor home environments and the need for more wholesome recreational activities for children, which are “preventive measures against immortality and crime which often result from misdirected energy in early childhood.” Her final sentence reads, “Save the child if you would save the state.”

An interesting companion piece to Rider’s article is “Street Trades in Alabama” by Loraine B. Bush, published in the August 1922 issue of The American Child [pp 107-113]. Bush had presented this material at the 17th National Conference on Child Labor and gives some background to the Rider study. Bush notes that three studies of newsboys “hours, earnings and behavior” had been conducted in 1920 in Anniston, Mobile and Montgomery. In the following year a second Mobile study and the one in Birmingham had been completed. Her article gives additional details about the lives of these “nearly 1,000 boys under 16 years of age in Alabama who take out licenses for street trades.”

These two articles give us a fascinating snapshot of life for some boys in Birmingham and other Alabama cities in the early 1920s. I am reminded of the various portraits of marginal existence and obsolete urban jobs in England described so well by Henry Mayhew in newspaper articles in the 1840s and published in several volumes as London Labour and the London Poor. A broad national perspective on newsboys and the street trades in America can be found in Peter C. Baldwin’s In the Watches of the Night: Life in the Nocturnal City, 1820-1930 (University of Chicago Press, 2012). 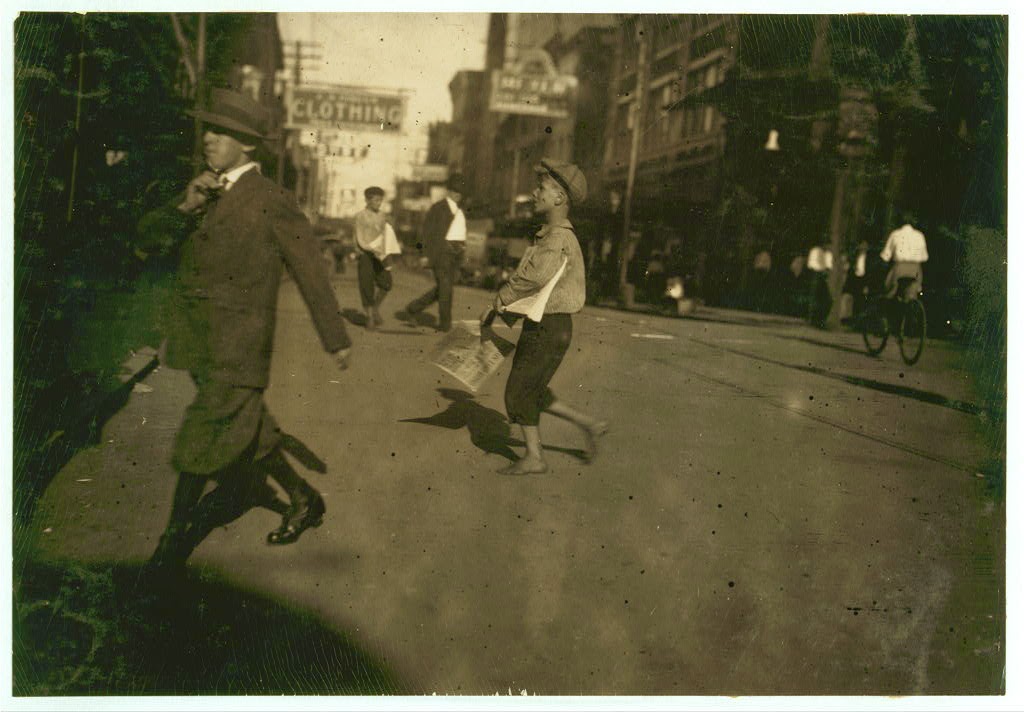 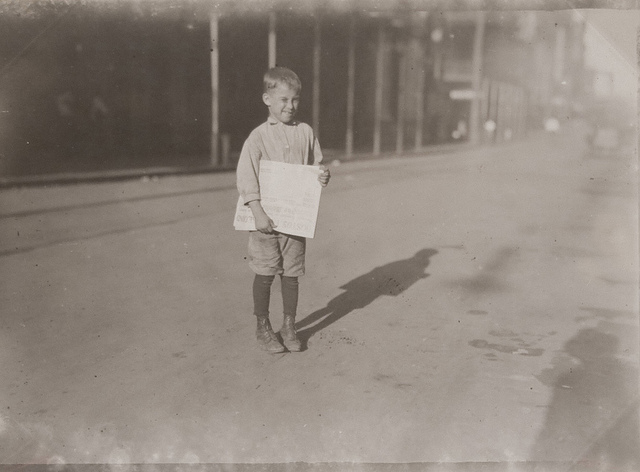 Another of Lewis Hines' newsboy photos from that 1914 Mobile visit

This piece first appeared on the Birmingham History Center's blog in April 2012.