Among the black women who left their birthplace in Birmingham early in life and achieved fame elsewhere are such well-known figures as Condoleezza Rice and Angela Davis and poets Sonia Sanchez and Margaret Walker. Another woman in that category was the flamboyant and mesmerizing singer Odetta. 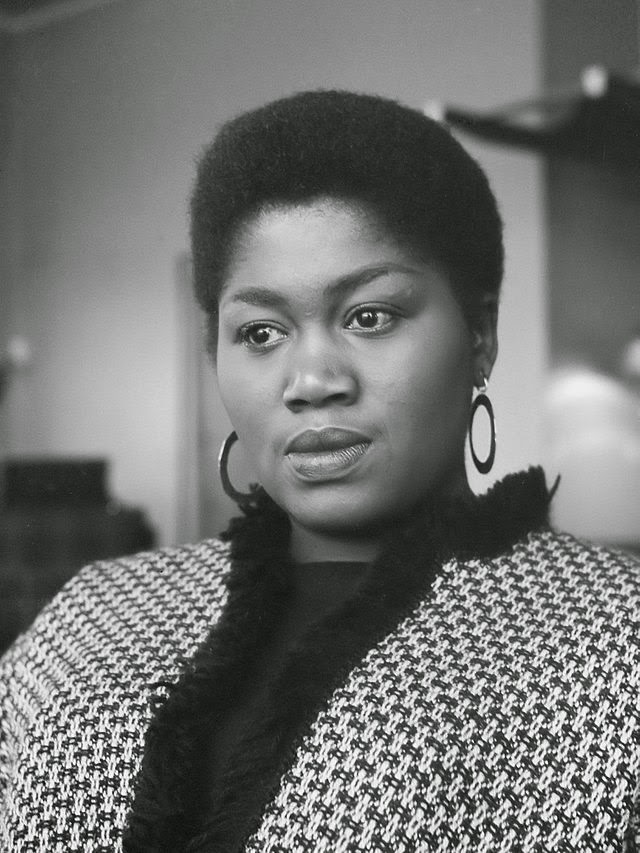 Odetta Holmes was born in the city on December 31, 1930. Her father Reuben Holmes died when she was still a young girl, and her stepfather Zadock Felious developed respiratory problems and eventually tuberculosis. Her mother Flora Sanders moved the family to the drier climate in Los Angeles in 1937. Three years later a teacher told Flora her daughter had a singing voice worth training. Odetta graduated from Los Angeles City College where she studied concert and theater music traditions. She knew that as a black woman her possibilities in those fields were limited and realized her music degree studies were “a nice exercise, but it had nothing to do with my life.” (Weiner, 2008)

By 1950 she had spent four years in the Hollywood Turnabout Puppet Theatre and toured the West Coast in a production of Finian’s Rainbow. On that tour she discovered coffee houses and the burgeoning folk music scene in San Francisco and began appearing with just her guitar and remarkable voice with its range of soprano to baritone. Soon she was on the road in the United States and around the world, a pattern that ended only when final illnesses prevented such activity.

In the mid-1950s she toured with Lawrence B. Mohr; he later became a political science professor at the University of Michigan. They released one album, Odetta and Larry, in 1954. Two years later she released her first solo album, Odetta Sings Ballads and Blues. Over her career she released 18 studio and seven live albums and a dozen compilations. The 1965 release Odetta Sings Dylan was the first major album of all-Dylan material by another performer. At the time the two shared a manager, Albert Grossman, a co-founder of the Newport Folk Festival and also manager of the group Peter, Paul and Mary. (Uhl, 2010) In a 1978 interview Dylan noted that her first solo album had exposed him to folk music and that he had learned all the songs. (Weiner, 2008)

Odetta found much of her material during visits to the Archive of Folk-Song at the Library of Congress, where she listened to the rich collections of work songs, blues, spirituals and white Appalachian and English folksongs. She performed at the 1963 March on Washington, where she sang a song that dated back to the slavery era, “O Freedom.”  This appearance solidified her role as an important performer in the struggles of the civil rights era. She was nominated for Grammy Awards in 1963, 1999 and 2005 but never won.

Late in life she received recognition for her artistry. President Clinton awarded her the National Medal of the Arts and Humanities in 1999. The Library of Congress’ Living Legend Award came in 2003. On March 24, 2007, the World Folk Music Association sponsored a tribute concert in Washington, D.C.  Artists such as Harry Belafonte, Janis Ian, Peter, Paul and Mary, Oscar Brand, and Roger McGuinn appeared to honor her.

Odetta returned for concerts in her native Alabama at least three times before her death. In October 1993, she performed for an hour at the annual Kentuck Festival of the Arts in Northport. She told Kathy Kemp for an October 20 article in the Birmingham Post-Herald, “One of the few memories I have before leaving Alabama was pretending at music. I remember pounding on the piano and having an aunt claim a headache just to stop me.” Odetta performed in June 2000 in a Saturday night show at the City Stages Festival here in Birmingham.  In February 2005 Odetta appeared in Saturday night and Sunday afternoon shows at The Library Theatre in Hoover. She was accompanied by pianist Seth Farber, also a conductor for stage musicals including Hairspray on Broadway. According to Mary Colurso’s review in the Birmingham News, the 90-minute show included many songs from two recent albums—a 2001 tribute to blues singer Leadbelly, Looking for a Home, and the 1999 release Blues Everywhere I Go.

In addition to her musical career, she acted in several films and television shows, including the 1961 adaptation of William Faulkner’s novel Sanctuary and The Autobiography of Miss Jane Pittman in 1974. She was married three times, to Don Gordon, Gary Shead and blues musician Iverson Minter, known as Louisiana Red. The marriages to Gordon and Shead ended in divorce. She never had any children. Odetta died of heart disease in New York City on December 2, 2008, less than two months before she was scheduled to appear at Barack Obama’s inauguration. A memorial service was held in the city the following February. She was cremated and the ashes spread over the Harlem Meer, a man-made lake in Central Park.

Two photos of Odetta performing in Birmingham at the Municipal Auditorium in 1965 and City Stages in 2000 are available at her BhamWiki entry. 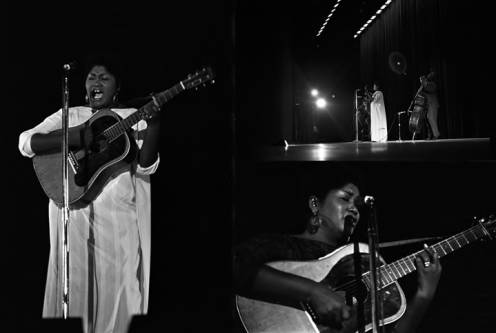 Odetta performs at the Municipal Auditorium in Birmingham in October 1965


A version of this post appeared on the Birmingham History Center's blog in July 2012.

Posted by AlabamaYesterdays at 7:14 AM