I am continuing this series devoted to covers and title pages from books by authors with some connection to Alabama.

Joseph Holt Ingraham [1809-1860] filled his fifty-one years with numerous accomplishments in two different fields--popular novelist and Episcopal priest. He was born in Portland, Maine, in January 1809, a son in a wealthy family. He later claimed to have studied at Bowdoin College and Yale. In 1830 he took to the sea on a voyage to New Orleans. The series of articles he published in a Natchez newspaper about the trip became his first book, The South-West, which appeared five years later. He had began teaching at Jefferson College in Mississippi and in 1832 married the daughter of a wealthy planter, Mary Brooks.

Over the next decade and more Ingraham and his wife traveled often between the South and New York City as he developed his career as author of numerous popular works of fiction. The first of those titles, Lafitte: The Pirate of the Gulf, was published in 1836. This novel was reviewed by none other than Edgar Allan Poe, who found it "by far too frequently descriptive" and proceeded to demolish the prose filled with "unnecessary detail". By 1847 Ingraham had written at least 80 short novels published by Boston firms and often featuring tales of pirates or the dangers of urban life. He claimed to have written 20 in a year.

In 1847 Ingraham joined the Protestant Episcopal Church and took a teaching job in Nashville. He gave up writing lurid fiction and by 1852 had become an Episcopal priest. Before he died he held various teaching and clerical positions around the South.

From December 1853 until January 1857 Ingraham served as the first Rector at St. John's Episcopal Church in Mobile. During that time he wrote The Prince of the House of David published in 1855. The book was the first best-selling fiction based on the life of Christ. The original publisher issued at least six editions, and when the copyright expired, a dozen more printed their own. Two subsequent novels, The Pillar of Fire [1859] and The Throne of David [1860], completed a Biblical trilogy of sorts.

Ingraham moved to Tennessee for a brief period and then in September 1858 became rector of Christ Church in Holly Springs, Mississippi. On December 18, 1860, Ingraham died there of a self-inflicted gunshot wound. His contemporaries considered his death to result from an accidental discharge of his pistol.

Ingraham and his wife had a son, Prentiss, who also had an Alabama connection and will be discussed in a future posting. The son had a life filled with adventure around the world before he began a second career as a novelist. Prentiss Ingraham published hundreds of works before his death in 1904, some of them revisions of works by his father. The younger Ingraham transformed the older's florid text into something more acceptable to late nineteenth century dime novel readers. Dozens of works by Prentiss were devoted to Buffalo Bill and were largely responsible for creating the myths surrounding William Cody. 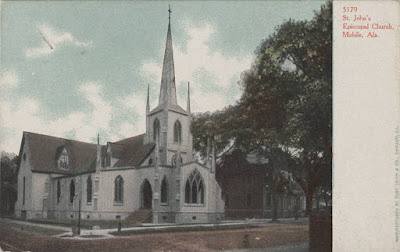 This postcard dating before 1910 shows St. John's Episcopal Church on North Dearborn Street in downtown Mobile. Founded in 1853, this wooden structure was used until 1956.

Below are some book covers and title pages of a few of Ingraham's novels along with commentary on some of them.

THE WIZARD OF THE SEA.

Entered, according to Act of Congress, in the year 1838,
By Harper & Brothers,
In the Clerk's Office of the Southern District of New-York.

Ingraham' s The Beautiful Cigar Girl; or, the Mysteries of Broadway was based on the famous Mary Rogers case in New York City. Rogers was a young woman who worked as a clerk in a tobacco shop and whose beauty overwhelmed many a customer. In late July 1841 her body was found in the Hudson River at Hoboken, New Jersey. The murder was never solved.

However, the real event has lived on in such fiction as Ingraham's and Poe's classic short story "The Mystery of Marie Roget", which appeared in 1842. Although the victim's name was changed and the setting relocated to Paris, Poe's story is sometimes considered the first murder fiction based on a real crime.

Daniel Stashower's article on the case can be found here. His 2006 book is The Beautiful Cigar Girl. 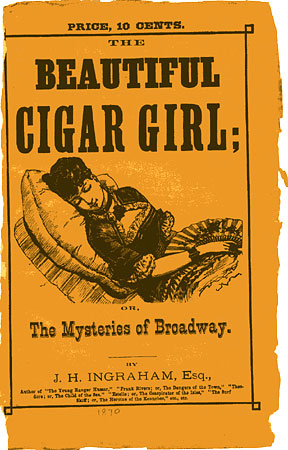 Cover of the 1844 first printing of the novel 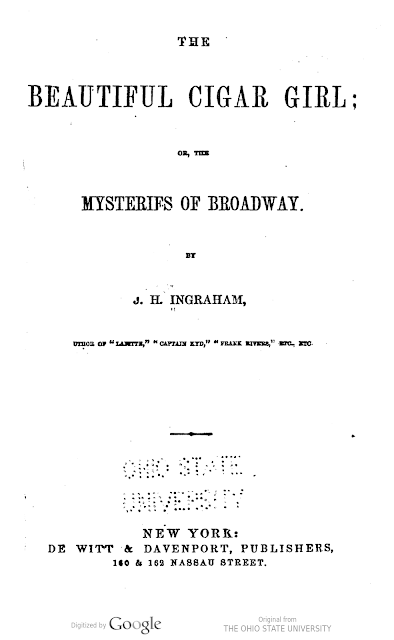 Title page from an 1859 printing of Ingraham's Beautiful Cigar Girl 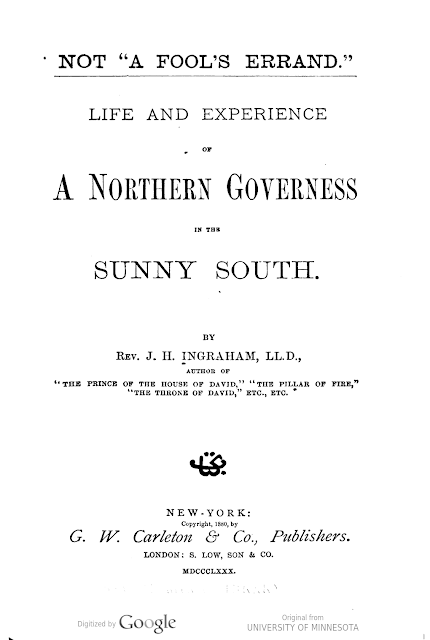 Ingraham's works remained popular long after his death. The title page above is an 1880 printing of the work.

His book The Pillar of Fire, first published in 1859, served as one of the sources for Cecil B. de Mille's 1956 film, The Ten Commandments. 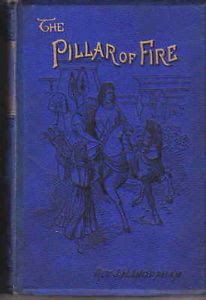 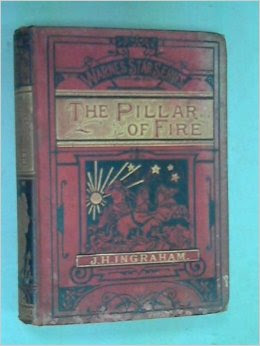 Another of Ingraham's popular works was that romantic novel based on the life of pirate Jean Lafitte and first published in 1836 as his second book. The title page below is from the 1852 edition. Many of Ingraham's works are available at the Internet Archive. 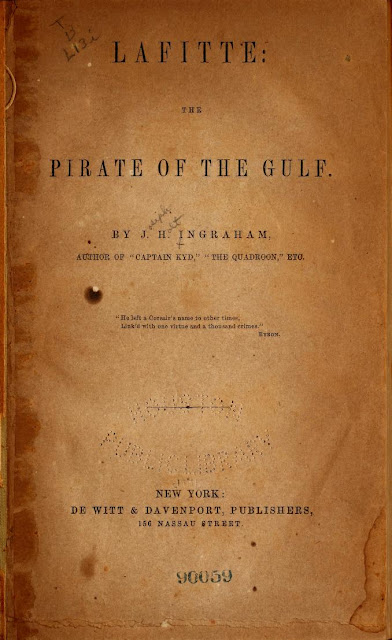 
﻿
Posted by AlabamaYesterdays at 9:36 AM