Women and their clubs have been very important to the development of public libraries in America. In a paper written in graduate school I explored this truth as exemplified by the efforts to organize a public library in Union Springs, Alabama, in the late nineteenth and early twentieth centuries.

I recently came across the 1949 newspaper item below and thought I would share it on this blog, since one of my ongoing topics is Alabama library history. The piece notes efforts to showcase the Birmingham Public Library and its campaign for a new building for the Woodlawn branch before the members of the Woman's Club of Birmingham.

In the segregated city of 1949, this club was no doubt made up of white women. African-American women in Alabama had their clubs as well.

"The Woodlawn Branch Library had its beginning in 1904 when a group of club women bought a few books and started a library at the home of Mrs. J. B. Gibson. On February 27, 1905, the library was moved to the business area and opened to the public. It was presented to the city of Woodlawn on March 7, 1905 by the club women. Woodlawn became a part of Birmingham in 1910. In 1911 the library was presented to the City of Birmingham to become the first branch library in the city system." 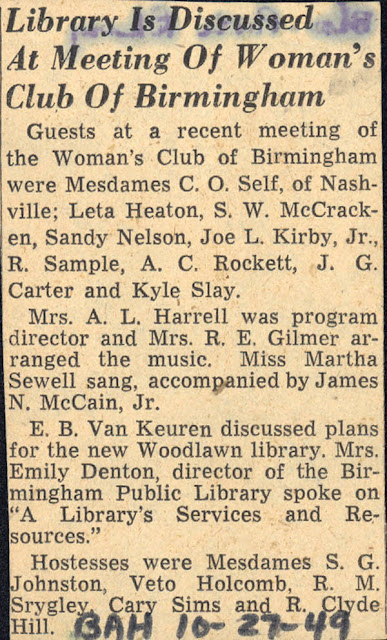 Posted by AlabamaYesterdays at 6:02 AM