Some Family Photos from the 1960s

I recently posted an item on some family photographs I took, or at least were taken with, a camera I had during the 1960's. This post continues that saga, and don't worry--there are plenty more to come as we travel back in time via old family photographs.

In 1960 we moved from a house on Cloverdale Drive in Huntsville to one on Lakeview Drive in the Lakewood subdivision. At the time that section of northwest Huntsville across Memorial Parkway from Alabama A&M was booming. Both houses are still standing, by the way. I'll be doing some posts on photos taken at Cloverdale sometime soon.

As we can see from the front and rear views of the house, we must have recently moved into it. The front and back yards are dirt with no trees or the basement entrance cover and patio dad would later build out back.

Some comments are below each photo. Based on the clothing, these pictures were probably taken during two different visits by my grandparents from Gadsden. 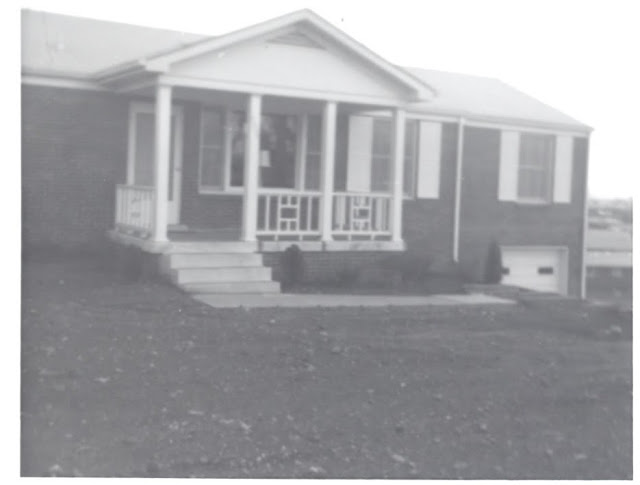 Here's the front of the house. Based on the rocks and the dirt, these photos were taken soon after we moved in. I think my brother Richard spent much of our lives picking up the rocks in the front and back yards before they were sodded. 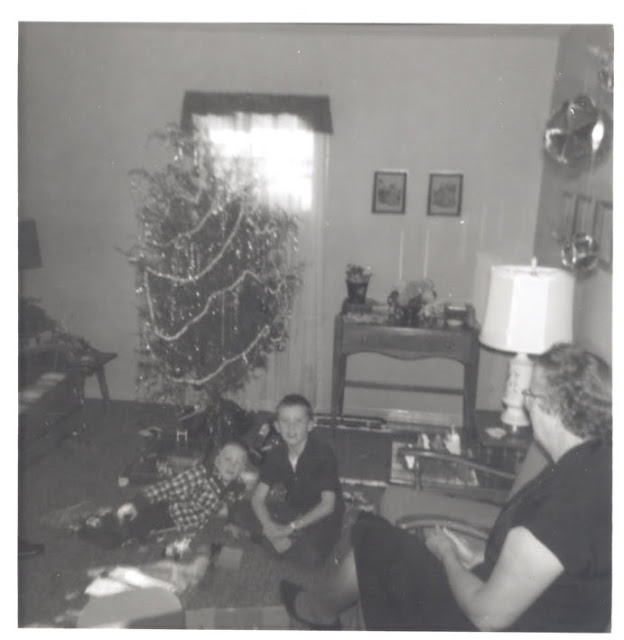 Ah, Christmas back in the day. Popcorn strung and put on the tree. All those thin aluminum strips that went everywhere. That's our grandmother Rosa Mae Wright [1900-1997] in the lower right corner. The small desk to the right of the tree is in mom's den at her current house in southeast Huntsville. That lamp may still be around, too. I may be proudly showing off a new wristwatch. 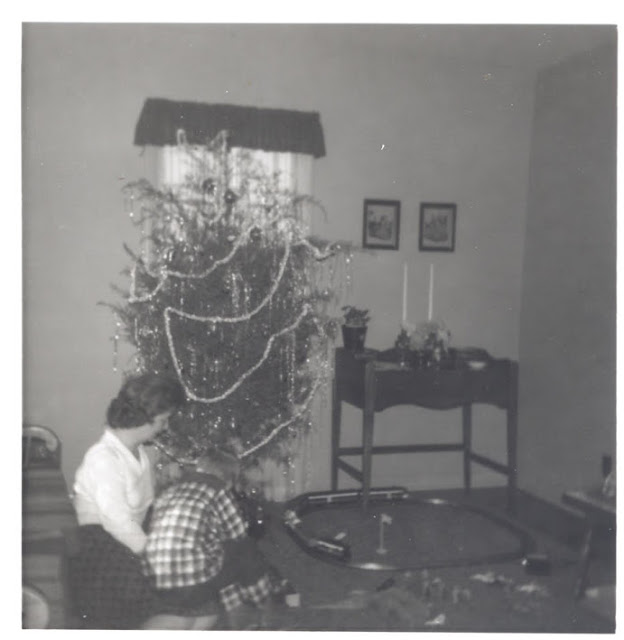 Another view with mom, Richard and the train set. These photos were probably taken after the Christmas festivities and the arrival from Gadsden of the grandparents. 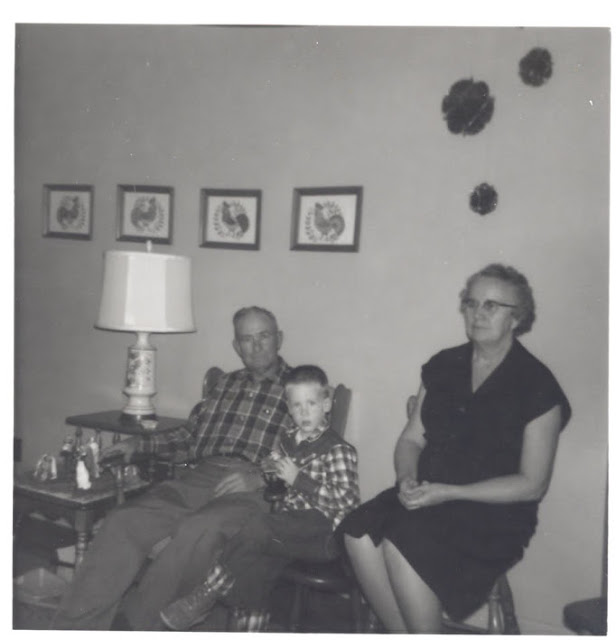 These folks may be getting tired of being photographed. That's the patriarch, Amos Jasper Wright, Sr. [1894-1975], on the left. That side table under the lamp is in mom's sun room now. 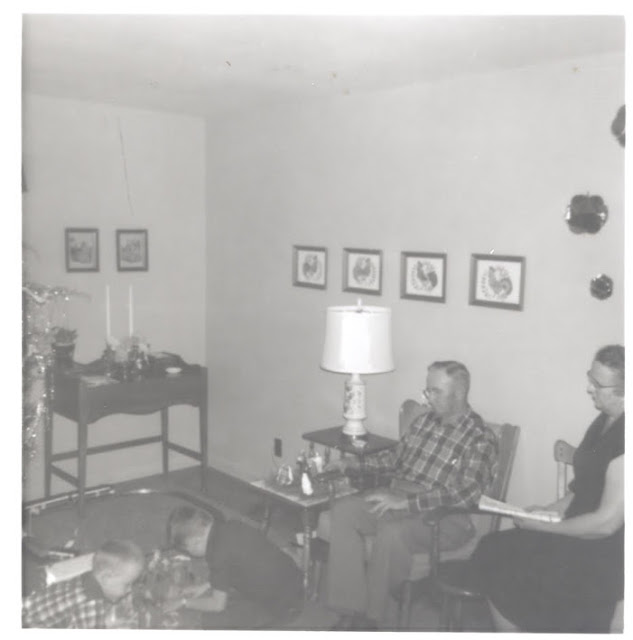 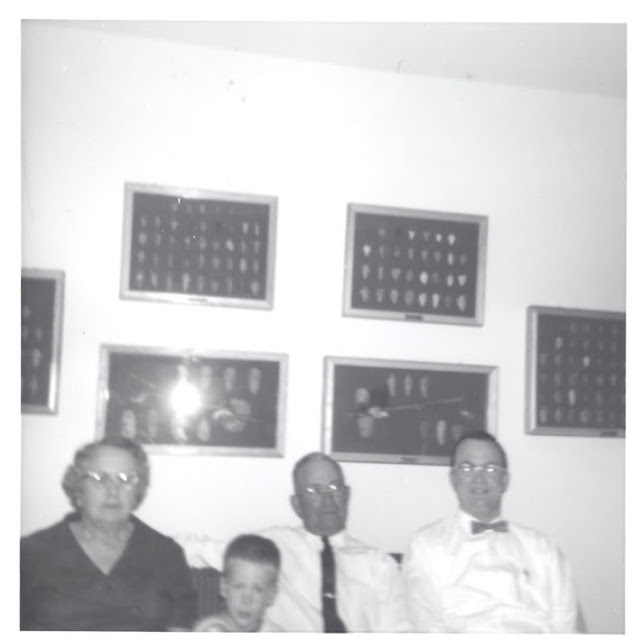 Now here's dad--Amos Jasper Wright, Jr.--on the right with his parents and younger son Richard. I probably took the picture; mom was probably in the kitchen.

On the wall behind them are mounted evidence of dad's early interest in Alabama archaeology. We still have these gems in the family. Mom, dad, Richard and I spent many winter Saturdays in the 1960s walking cotton fields and other areas in north Alabama surface collecting whole ones and pieces of projectile points [arrowheads], pottery sherds, etc. We would bring them home, and after washing dad would meticulously label them with the University of Alabama Office of Archaeological Research in Moundville's site number and the finder's initials. We picked up thousands of these things over the years. Much of that material has since been donated to OAR.

Dad was very active in archaeology in Alabama for many years. He served as President of the Alabama Archaeological Society and edited their Stones and Bones newsletter for a long period. In addition to several articles, his research resulted in two books: The McGillivray and McIntosh Traders: On the Old Southwest Frontier, 1716-1815 and Historic Indian Towns in Alabama, 1540-1838.

His research materials and collection of books on Alabama and Southeastern Indians were donated to the Alabama Department of Archives and History. 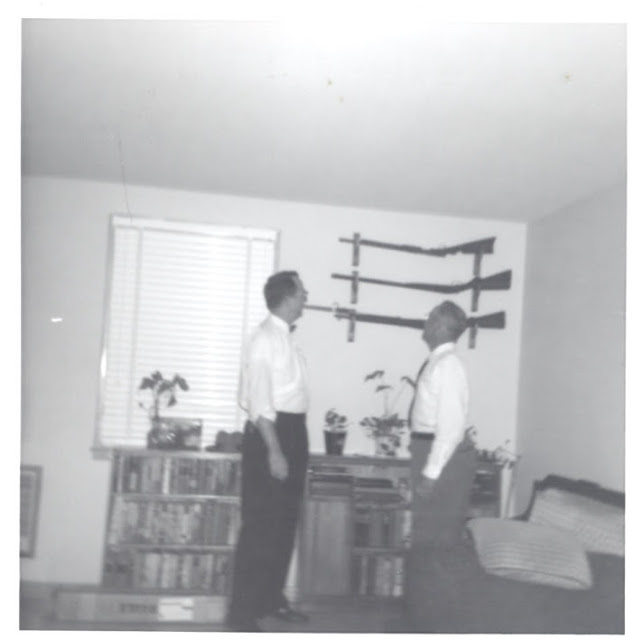 Father and son talking about the guns, or maybe that crazy kid taking photographs. The bookshelf on the left is in my basement in Pelham; the other one is in mom's basement in Huntsville. 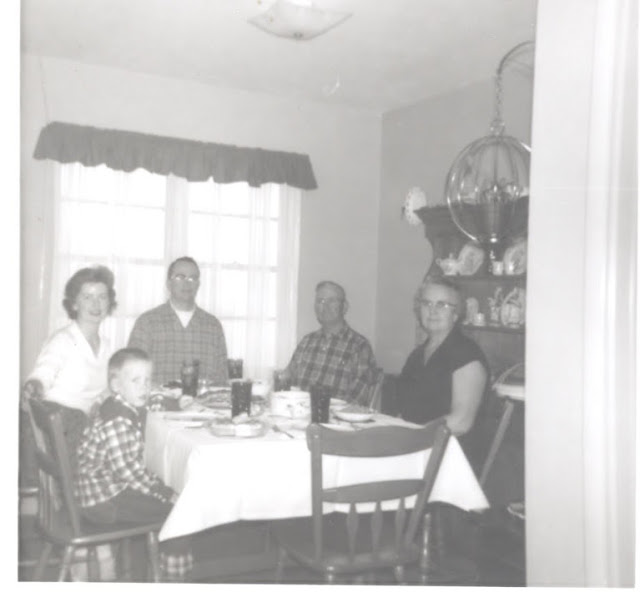 These two photos show the family around the table. I guess I took this one, and dad took the one below. Mom stil has that hutch on the right. The table and chairs are still around, too. 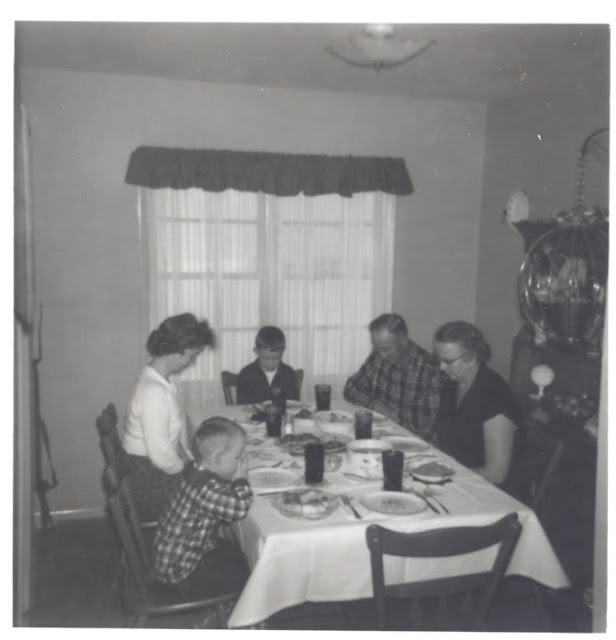 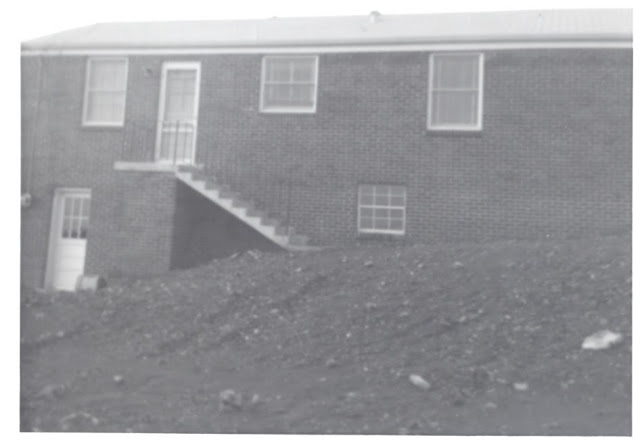 And finally the back yard of that Lakeview Drive house. The door on the lower left led to the basement. Dad would later build a small room off that door for garden tools and our future beagle Duchess. That previous post I mentioned at the beginning has a photo or two of her on top of the roof. Dad would also put in a patio in this backyard.

Posted by AlabamaYesterdays at 11:46 AM