The 1917 season was the seventh that the Barons played at Rickwood Field. This period was the "dead ball era" in professional baseball in which strategy, base hits and speed at stealing bases were most important. Home runs were not emphasized by players or fans, and teams hit very few.

Four no-hitters were pitched at Rickwood that season. Barons pitchers Ralph Comstock, Carmen Hill and Ray Milligan had one each. A pitcher for the Little Rock Travelers also threw a no-hitter at the park. Hill's final record of 26-12 set a Barons record for wins in a season. Further information on Comstock and Hill is below; Milligan apparently did not play in the major leagues.

The Birmingham Black Barons shared Rickwood Field with the white team, but did not begin play until 1920.

Allen Barra's history of the stadium is Rickwood Field: A Century in America's Oldest Ballpark published in 2010. 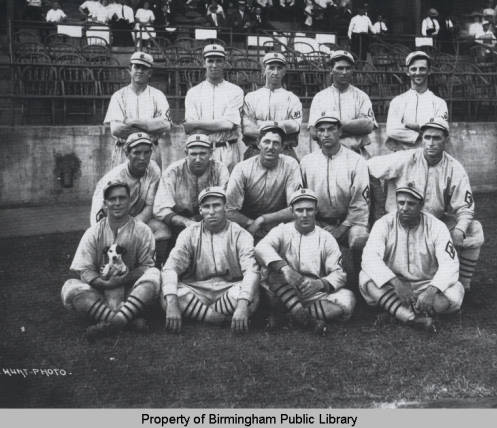 Birmingham Barons, Rickwood Field, spring 1917. Taken by O.V. Hunt. I wonder what position the dog played. See Comstock's photo below; is that him holding the dog? Not sure which one might be Hill.

Right-handed pitcher Comstock was born November 24, 1890, in Sylvania, Ohio. He played three non-consecutive seasons in the major leagues, finishing with an 11-14 record as a pitcher.

Right hander Carmen Hill was born October 1, 1895, in Royalton, Minnesota. He pitched 10 years for several teams in the National League with a final record of 49-33. His last season was 1930.

Posted by AlabamaYesterdays at 6:59 AM