Although she was born in Chattanooga (April 15, 1894, was the date given by her family), the great blues singer Bessie Smith had Alabama connections. Let's investigate.


Smith's father William and mother Laura are listed in the 1870 U.S. Census as living in Lawrence County, Alabama. Five children were also living in the household, including two teenagers, Bloney who was 15 and Fannie, 13. Also listed were Eveline, Gabe and Paralee who were 9, 6 and 4. Both parents and the three younger children were all born in Alabama. Paralee was probably the only one not born a slave The two teenagers were born in Kentucky according to the census.

Sometime before Bessie's birth, the family moved to Chattanooga. William died there in November 1899 and Laura in April 1903. By that time 8 children including Bessie made up the family. Two of her brothers died at a young age. Smith's family tree is incredibly complicated; you can see a listing here. All except Bessie, Bloney and Fannie were apparently born in Alabama.

After the parents' deaths, older sister Viola raised the younger siblings. Bessie and brother Andrew became street entertainers to raise money; she sang and danced and he played the guitar. Before long Bessie appeared on the African-American vaudeville circuit. In their book The Original Blues: The Emergence of the Blues in African American Vaudeville, authors Abbott and Seroff describe her performance on the bill at the Bijou Theater in Bessemer on October 3, 1911.

Brother Clarence had gone to work with the Moses Stokes travelling troupe and in 1912 arranged an audition for Bessie. Since the troupe already had a great blues singer, Ma Rainey, Bessie was hired as a dancer.

Bessie's talents soon led to greater things, and by 1923 she was under contract with Columbia Records. Her first recordings were "Gulf Coast Blues" and "Downhearted Blues". Clarence Williams played piano. The record sold 750,000 copies that year alone. Her recording career continued with great success until the Depression devastated the industry. Smith never stopped performing until her September 1937 death from injuries received in a car wreck in Mississippi. Her grave in Philadelphia remained unmarked until 1970.

Bessie Smith probably performed in Alabama many times, and no doubt her records sold well in the black communities of the state. A slight change in circumstances might have made her a native as well. 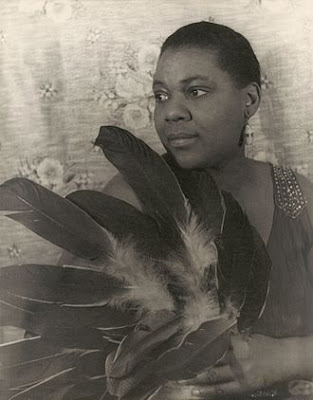 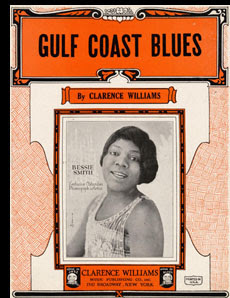 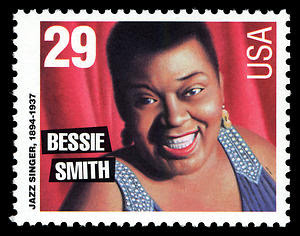 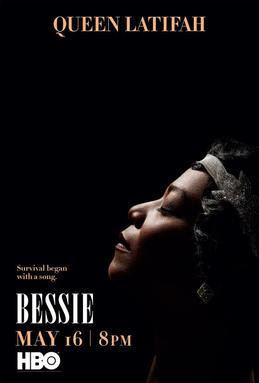 This HBO film starring Queen Latifah as Bessie premiered in 2015. I recently watched this biopic and enjoyed it very much.

Posted by AlabamaYesterdays at 8:52 AM