The city of Birmingham has hosted appearances by many famous people over the years. I recently did a blog post on two by John Philip Sousa early in the 20th century. This time up it's Eddie Rickenbacker.

The Alabama Archives gives the date of this photograph as sometime in the 1939 to 1943 range. Rickenbacker accepted an offer to lead Eastern Air Lines by its original owner General Motors in 1935. He held that position until 1959 and remained on the board of directors until 1963.

Born in Columbus, Ohio, Rickenbacker [1890-1973] won the Distinguished Service Cross eight times in World War I as a flying ace with 26 victories. In 1930 one of those awards was converted to the Medal of Honor. France also awarded Rickenbacker the Legion of Honor and Croix de Guerre.  Thus began a life of extraordinary achievement.

After World War I Rickenbacker designed and raced automobiles and served as a military consultant. In the late 1930's he promoted airplanes in both civilian and military spheres by writing two popular comic strips, Ace Drummond and The Hall of Fame of the Air. In February 1941 he survived a near-fatal plane crash, and in October 1942 spent over three weeks adrift in the central Pacific after another crash. He made a trip to China and the USSR in the spring and summer of 1943 on a fact-finding mission. Thus by the time he appeared in Birmingham Rickenbacker was a well-known and popular figure.

Several prominent men joined Rickenbacker at the dais as he spoke to members of the Birmingham Aero Club and individuals from other areas around the state. Governor Frank Dixon was there; he served from 1939 until 1943, so that is the possible date range for the talk. Also present was R.H. "Bob" Wharton, who served as President of the Jefferson County Commission.The arched, sandstone bridge forming an early cloverleaf intersection at U.S. 31 & Lakeshore Drive in Homewood is named after him. George A. Mattison, Jr., was a Birmingham industrialist. Charles E. Oakes was listed in the 1942 Birmingham City Directory [found via Ancestry.com] as the President and General Manager of the Birmingham Electric Company. The other dignitaries--James A. Simpson, J.W. Morgan and W.J. Wise-- remain unidentified at the moment.

The Birmingham Aero Club had its beginnings in 1922 as a company by that name founded by Glenn Messer. The firm was not successful, and Messer turned the name over to Steadham Acker. He and others developed the organization that still exists today and is the sponsor of the Wings and Wheels Air Show, one of the longest running aviation events in America. The club was also responsible for early development of what is now the city's Southern Museum of Flight. 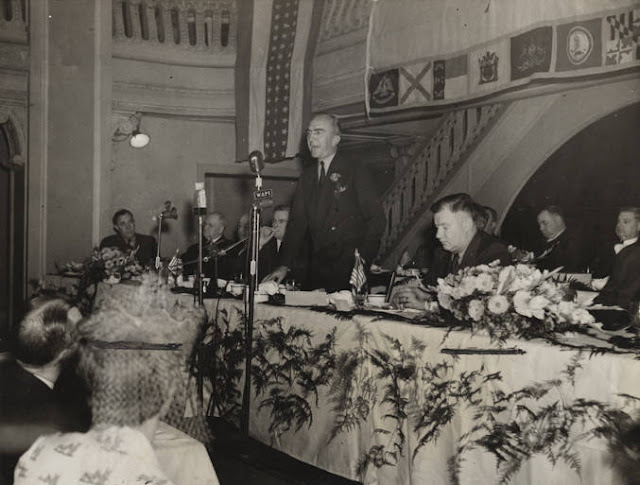 Posted by AlabamaYesterdays at 10:03 AM