Whatever Happened to Powhatan and Praco?

My aunt Marjorie Shores Pike, one of mom's older sisters, died in January. I was reminded by her obituary that she was born in Praco, Alabama. Mom herself was born in Powhatan, another small mining town in Jefferson County.

When the family lived in Praco where Marjorie was born in January 1928, my grandfather John Miller Shores worked as an inspector for the mine company. At the end of the day he would go into the mine and make sure all equipment had been left in its proper place or brought to the surface. He worked this job to earn money for college, and then he planned to enter the Methodist ministry. He had begun ministerial training and had a church assignment, but was still going to college when they were living in Powhatan where mom was born in December 1929.

Both Powhatan and Praco no longer exist except as memories and in the case of Praco some ruins. Let's investigate.

The towns were located close to each other just north of the Locust Fork in northern Jefferson County. Powhatan was on Alabama 269/Birmingport Road; Praco was located a bit north on Jefferson County 81 or Flat Top Road. A Powhatan Street remains and heads east near the Birmingham Marine Terminal.

On a web page about Alabama coal mines I found this information on Praco:

"The small community of Praco, the last company-owned coal town in Alabama, will vanish next month. The deteriorating community northwest of Birmingham is shutting down, its residents having been told by Alabama By-Products that they must find new homes within 30 days. About 80 houses remain, not all of them occupied. The number of people affected isn't known ... 'These are the last of some 500 houses that we owned in that area,' said Gene W. Lewis, president of Alabama By-Products. 'The primary purpose of these houses many, many years ago was for our employees. It's not a cold-hearted decision, but was one made quite some time ago. We are not in the housing business but in mining.' The company store closed last June, and the company has notified the remaining residents that they must vacate. Many of the residents do not look at Praco's closing with nostalgia, but with anger and worry. 'I would like to stay. It is about the only place where I can afford to rent,' said Mrs. Billie Pridemore, a Praco resident for 26 years.

That same web page had this photo and caption: 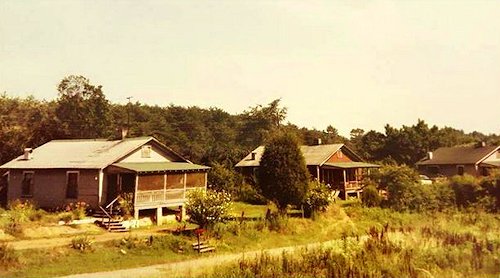 A recent article by Kelly Kazek gives more information about the background of Praco. The town appeared around 1910 on land owned by the Pratt Consolidated Coal Company from which the name was derived. The owner by the 1970's was Alabama By-Products; the land is now owned by Walter Energy. The mine closed in the late 1950's, but as the quote above notes Alabama By-Products maintained a company store and housing for many years afterward. Kazek's article has many photographs of the mine's remains and information about significant mining events including a May 1943 explosion that killed 10 miners.

According to this site, Praco's post office operated from 1931 until 1986. The same site notes the Powhatan post office operating from 1919 until 1978. I also located in the Alabama Almanac and Book of Facts 1955-56 that Powhatan is included in a list of places in the state with telegraph stations. [p. 252]

The 2002 book The Heritage of Jefferson County, Alabama has entries on both Powhatan and Praco. The source of information about the towns given there is Barry J. McCleney's 1991 book, Journey into the Past: A History of the West Jefferson Area.

In 1917 the Powhatan Coal and Coke Company was founded, but soon failed and the Franklin Coal Company assumed operations the following year. The company constructed a two-story school. In 1926 the Methodists organized in the area and met in the school. This must have been John Miller Shores' church. The company was operating two mines by 1934, but operations ceased by 1947. The school closed two years later.

The commissary was purchased and run as a private store for a few years. By 1978, when the Powhatan Fuel Company began strip-mining in the area, most signs of the community were gone. Sometime in the late 1990's my mother and her two sisters Heth and Marjorie toured various places in the state where they had lived growing up as a preacher's kids. They were in the Powhatan area one day, and stopped to asked where Powhatan was. The gentleman pointed to a mud puddle near the road and said, "Somewhere around that."

Just after 1900 the Pratt Consolidated Coal Company began to purchase land for mining in the area that became Praco. The first mine opened in 1905 and by the following year were employing almost 50 people. Originally called the Skelton Creek Mine after a local family, the company renamed it Praco in August 1907. By 1927 some 300 new camp houses had been constructed, along with a commissary, doctor's office and a post office.

In September 1958 the mines closed, but the coal preparation plant continued until 1966. By 1979 some 200 houses remained and in December 1981 the company informed residents they would have to relocate. By August 1982 the community was deserted. 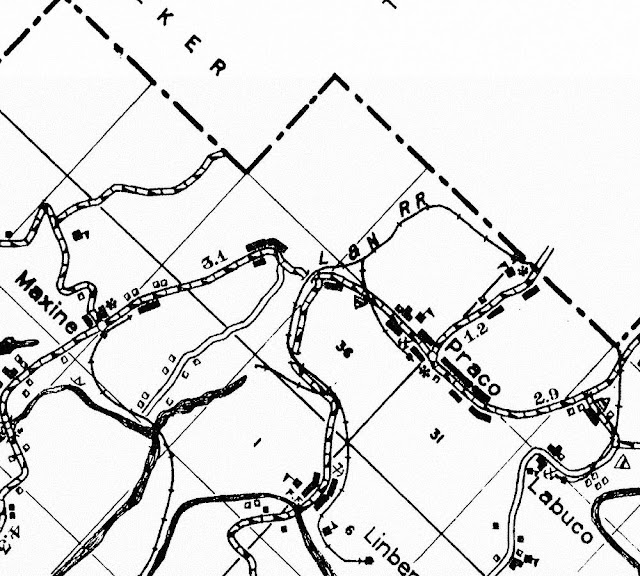 Praco on a Jefferson County map from 1942. The map above shows details including two schools [the squares with flags on top] and the nearby L&N Railroad. I did not find Powhatan on this map. 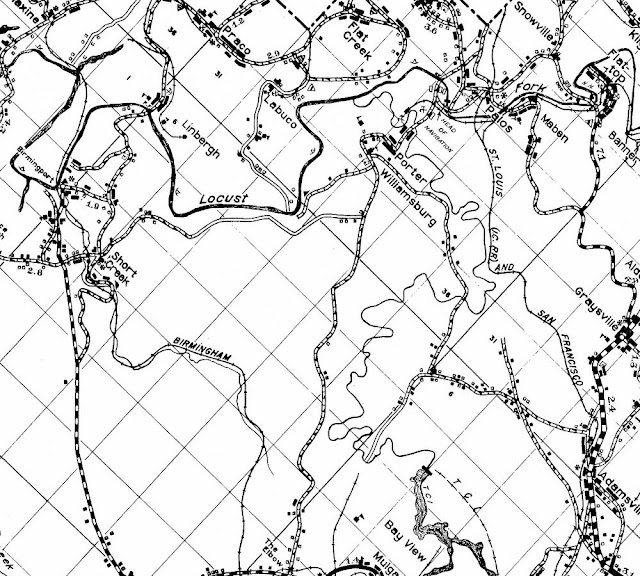 This larger portion of the same county map shows Praco and some of the surrounding towns. 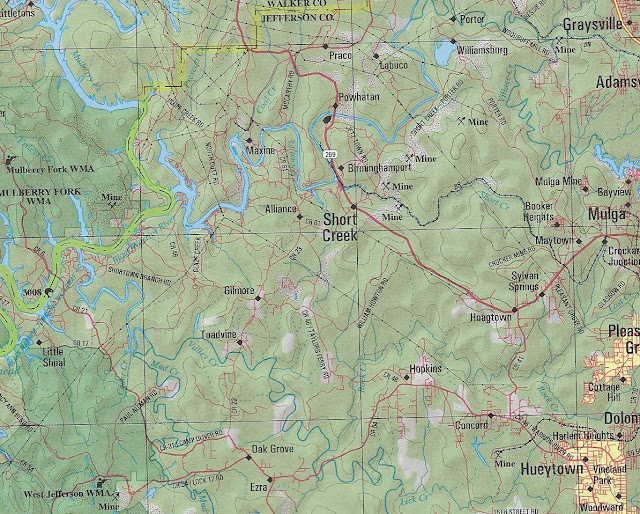 This map shows Powhatan and Praco due west of present day towns of Graysville and Adamsville. 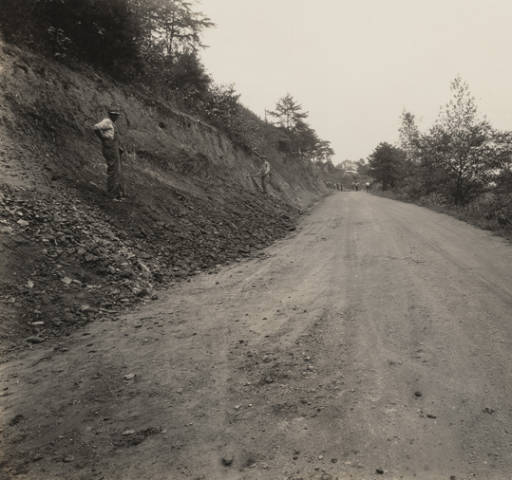 This photograph shows road grading and widening near Praco around 1935. 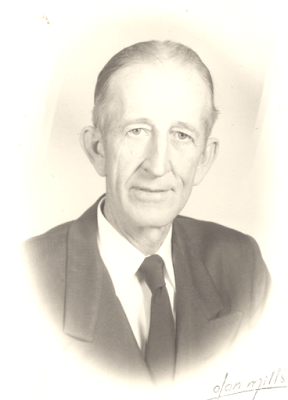 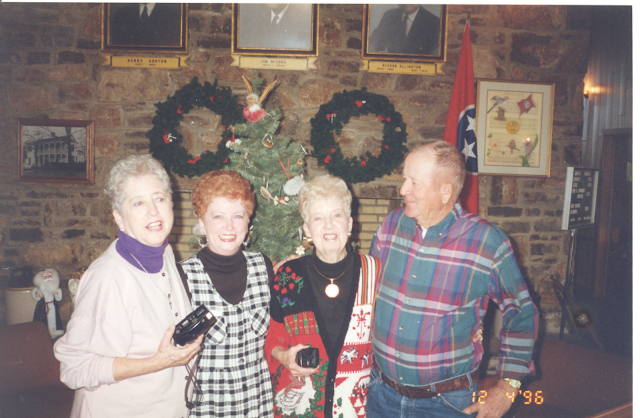 Here are the four children of Tempe and John Miller Shores: Margorie, mom, Heth and John. Heth was born in Brundidge and John in Sipsey.

Posted by AlabamaYesterdays at 11:02 AM