Heading east on Alabama 119 between I-65 and toward U.S. 280, you'll pass Oak Mountain Elementary and Middle Schools on your left. Not far beyond is Allan Cemetery and what looks like the shell of a former church. Let's investigate.

Back in 2011, Barry Wise Smith wrote an article for AL.com, "Hidden Haunts: Small, local cemeteries reveal Birmingham's early history." The Allan Cemetery is included in that group, so let me quote the text there which is a good introduction:


"Located on Alabama Highway 119 in north Shelby County is the Allan Cemetery, established in 1835. Originally known as the Johnson Cemetery, for one of the first families to settle in the area, the name changed in the early 1900s. The land belonged to Rollin Johnson's great, great, great grandfather Col. Isaac Francis Johnson, who owned 400 to 500 acres. A doctor, Col. Johnson started the cemetery when his wife and two sons died in a yellow fever epidemic in 1835.
The old cemetery features names that are well known in Shelby County historical circles: Johnson, Bishop, Cross, Allan, Brasher, Gilbert and more. The oldest readable stone in the cemetery features a birth date of 1808. The graveyard has been surveyed and mapped by the Shelby County Historical Society and still is active with burials ongoing. The shell of the building that sits adjacent to the cemetery, often thought to be a church, is actually an old meeting hall that was built to host funerals, memorial services and revivals. "I remember going there as a kid," Johnson recalls. 'I even helped lay some of the floor boards.'
Down the road, hidden behind several residential developments, is an almost-forgotten graveyard that is home to a number of graves belonging to African-American descendants of slaves. The last names on the gravestones, a number of which are hand-carved, feature the same last names found in the Allan Cemetery. Many of the graves here are unmarked or simply marked with stones. Due to neglect, many of the sites are buried further under waist-high weeds."

The Heritage of Shelby County, Alabama, published in 1999 has an entry on the Allan Cemetery written by Rollin L. Johnson, Jr. [page 123]. In addition to the details in the Smith article, Johnson notes that for many years a "memorial day" was held at the cemetery on the second Sunday in June. The event actually began the previous Wednesday when the cemetery was cleaned. The gathering included dinner on the ground on Sunday and afterward a singing in the chapel. Children could play in Hooker Springs, the source of nearby Bishop Creek. Johnson writes that that "memorial day" and the scheduled cleaning no longer occur, but the cemetery is still worked by individuals with relatives and ancestors buried there.

I've passed by the cemetery many times, and recently Dianne and I stopped late one afternoon. A few of the photos I took are below, along with some further comments. Maybe another time I can locate the African-American cemetery nearby. 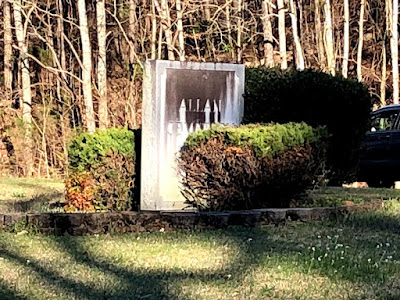 Here's the cemetery sign today, not as well kept as in the photo below 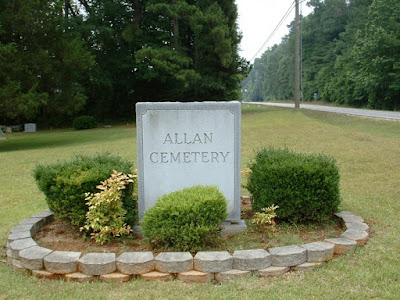 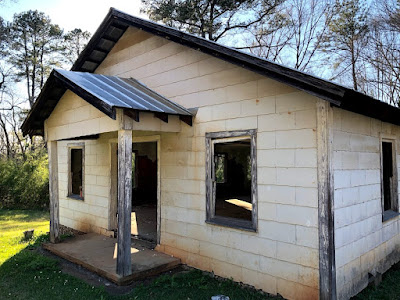 Front view and entrance of the meeting house 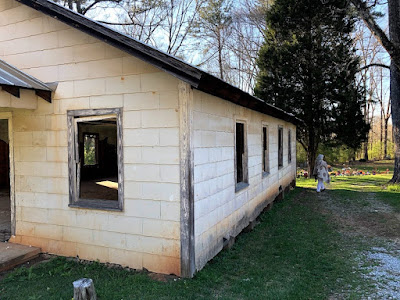 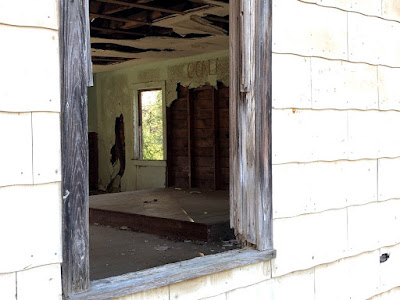 View through a window of the raised stage area 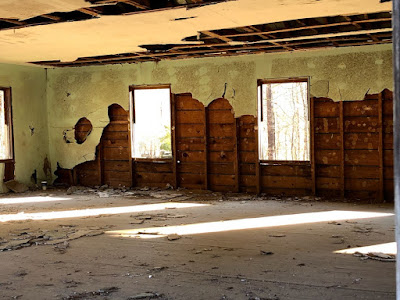 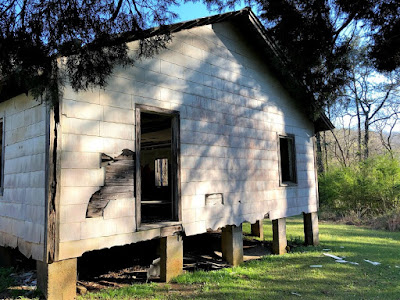 Rear views of the buidling 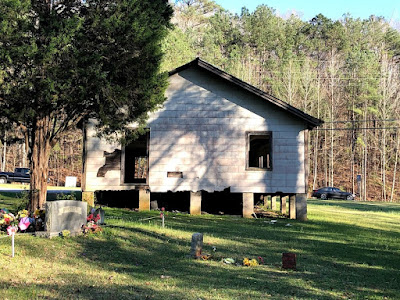 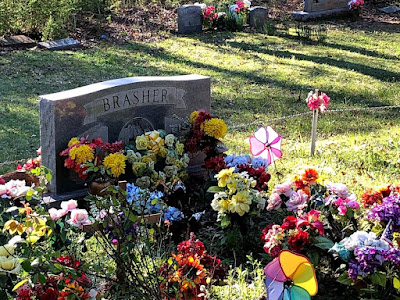 Various Brashers are buried in the cemetery; here's a recent grave 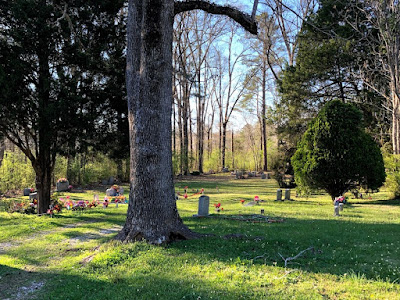 The cemetery is nestled among a number of large trees. Once located in a very rural area distant from Birmingham, northern Shelby County's growth in recent decades now surrounds the cemetery. 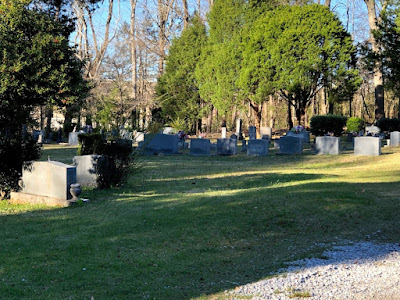 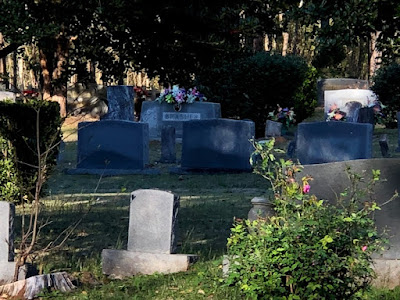 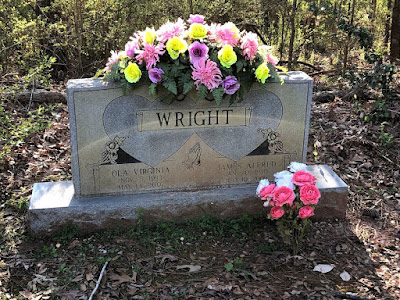 There are several Wrights buried here, but I don't think any are from my family lines. 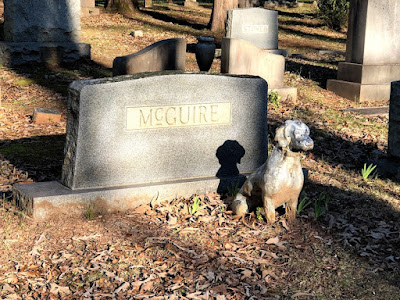 Man's best friend is on alert at this grave. 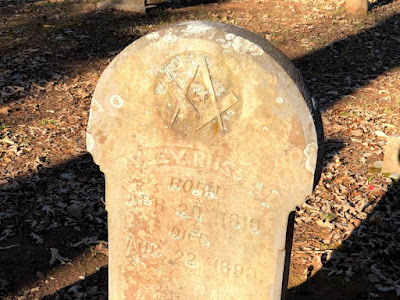 You can sometimes find the Masonic symbol, the square and compass and often a letter in the center, on gravestones. 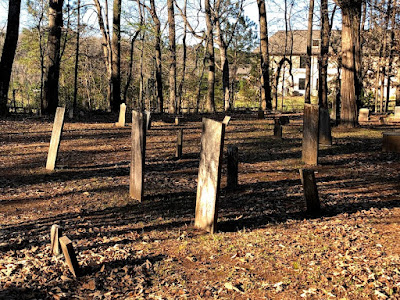 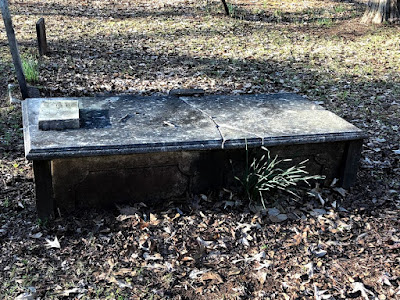 The cemetery has a single mausoleum that we found. 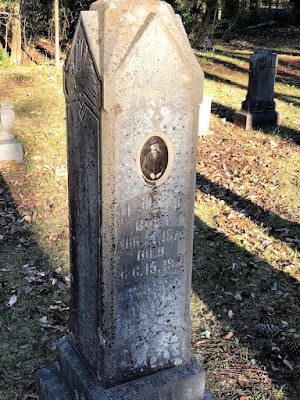 Several gravestones include photographs of the deceased. Although still unusual, such photos are also seen today on new interments. 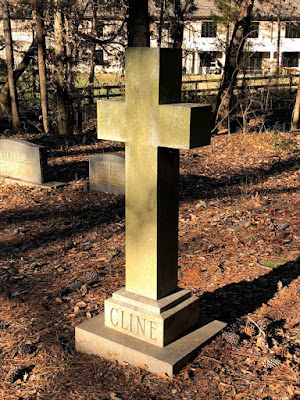 One gravestone is a large cross. 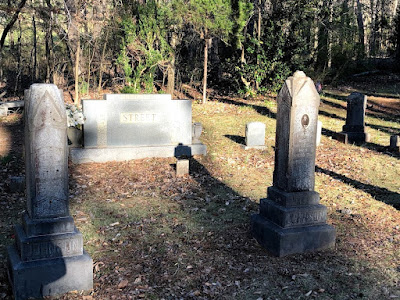 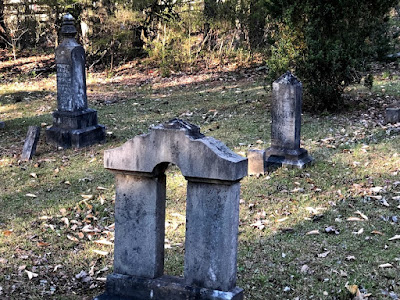 This gravestone takes the form of an archway. 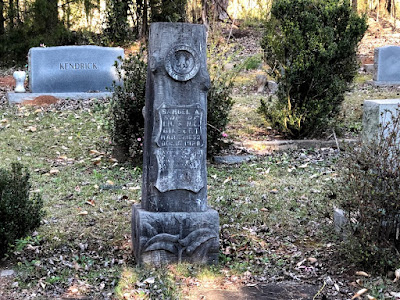 And of course there is a Woodman of the World headstone. This fraternal organization was founded in Omaha in 1890 and provides life insurance to members. An early benefit of membership was these markers, which were discontinued around 1930 due to cost. However, so many were created that they can be seen in cemeteries across America. 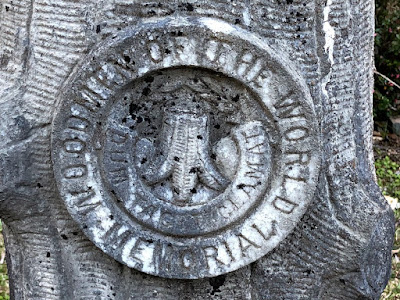 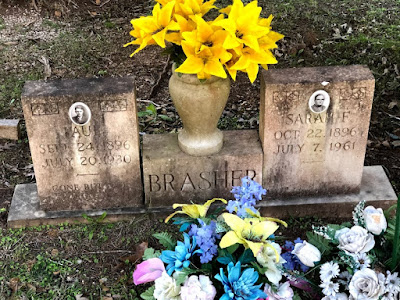 Posted by AlabamaYesterdays at 11:05 AM