In a previous post on this blog I've examined Birmingham photographs taken by Walker Evans probably in 1936. I'll be examining two more photographs in this post and additional ones in the future. Here's what I wrote about Evans in that previous post.

Walker Evans [1903-1975] was one of the great documentary photographers of the twentieth century. Evans made three brief trips to Alabama during his career, in March and the summer of 1936 and again in 1973. The images he recorded on the 1936 visits are among the most iconic Great Depression photographs taken in the United States.
His most famous photos were taken in Hale County that summer. In the previous year Evans had been working for the Farm Security Administration, a New Deal program that was part of recovery efforts during the Great Depression. Evans traveled to various places, including the South, documenting agricultural and industrial life and work.
In summer 1936 writer James Agee accepted an assignment from Fortune magazine to write about sharecroppers in the Deep South. Agee wanted Evans to accompany him, so the photographer took a leave from the federal agency. The two men spent eight weeks in the Alabama summer living primarily with three sharecropping families. The manuscript Agee delivered to Fortune was much longer than the magazine would publish; it eventually became the book Let Us Now Praise Famous Men published in 1941. Agee's singing prose about the daily lives of these desperately poor but proud people, and Evans' images make reading the book an unforgettable experience.
Evans' third trip to Alabama came in 1973 when he and artist and photographer William Christenberry, an Alabama native, toured Hale County. Some of the color photographs Evans took on that trip appeared with Christenberry's in a museum exhibition "Of Time and Place" as well as the exhibit's catalog.
These two photographs were taken on one of the trips Evans and Agee made between Birmingham and Greensboro and Hale County. The location of the first one is unknown, the second was taken in downtown Marion. 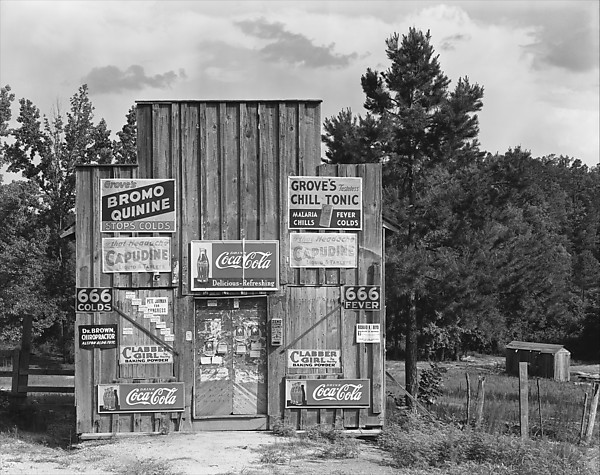 Evans' photo of a store between Tuscaloosa & Greensboro #Alabama in 1936.

This store served as a billboard for all sorts of product advertisements; in fact, those ads may be holding the structure together. Coca Cola is certainly the most recognizable one today, although many will also recognize Clabber Girl, a brand of baking soda, powder and corn starch. Those products are still sold today by Hulman & Company, which also owns the Indianapolis Motor Speedway and the sanctioning body of open wheel racing as well as the Rumford line of baking powder.


The other products may be more mysterious. Hicks Capudine Liquid was a patent medicine manufactured in Raleigh, North Carolina. 666 was a concoction for use against the "discomforts and distress" of colds and made by the Monticello Drug Company of Jacksonville, Florida.

Grove's Tasteless Chill Tonic was developed by E. W. Grove in the late 1870's. He had a small drug business in Paris, Tennessee, when he came up with a syrup in which he could suspend particles of quinine. That substance was an effective treatment against the chills and fever of malaria, which was common in the U.S. South, and the syrup made taking it more palatable. His product was an instant success, both regionally and around the world. The British army adopted it for all their troops in areas where the disease affected them. Bristol-Myers Company bought Grove's in 1957.


On the left side of the building under the "666" ad there seems to be one for "Dr. Brown, Chiropractor" and something else I'm unable to make out. I also wonder what those notices on the doors had to offer. 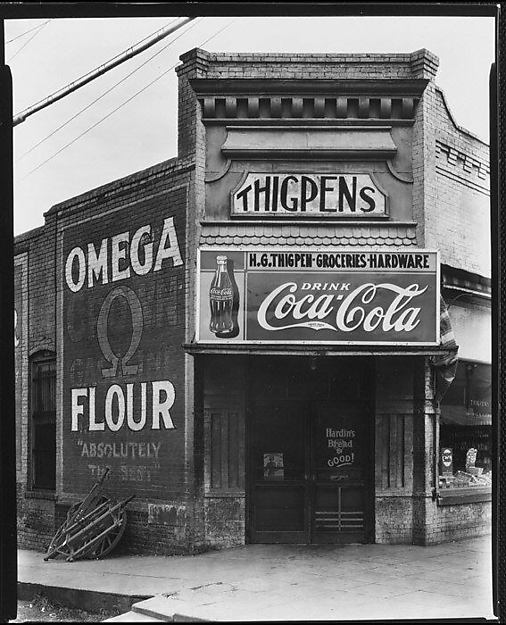 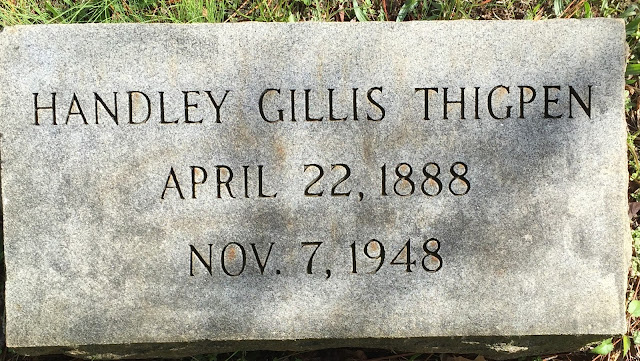 Handley Gillis Thigpen, Sr., is buried in the Marion Cemetery. His son is also buried there. Delia died in March 1986.

Posted by AlabamaYesterdays at 6:14 AM