A Visit to Brundidge, Alabama

This past July my brother Richard and I made one of our annual trips seeking Alabama and family history. This time we were in east central Alabama mainly around Brundidge and Camp Hill. We visited several other places I've already written about such as Smuteye, Union Springs and Aberfoil. I'll be doing future posts on Camp Hill and Tallassee. A decade or more ago mom and two of her sisters, Heth and Marjorie, made a similar trip to Brundidge and Camp Hill; some things have changed, others not so much.

Brundidge is a very nice little town in southeastern Pike County that bills itself as "Alabama's Own Antique City." The downtown area is filled with shops and galleries of all types; we enjoyed a respite from the late July heat in a pleasant coffee shop. Almost all the storefronts we saw were occupied by active businesses or other entities. The population in 2013 was estimated at just over 2000 people.

My maternal grandmother Tempe Hilliard Flowers Shores was born in Brundidge and lived there until she left to attend Huntingdon College. Her parents Joseph and Mollie Flowers lived in Brundidge for many more years. After Tempe married future Methodist minister John Miller Shores, they and their children, including mom, often visited. My maternal great-grandfather ran a general store in town.

Richard and I wanted to visit the house and store sites as well as the Brundidge City Cemetery where ancestors are buried. On the way out of town to seek another cemetery nearby, my brother and I passed the reason Brundidge seems to be doing so well: a massive Wal-Mart distribution center.

Photos and more commentary are below. 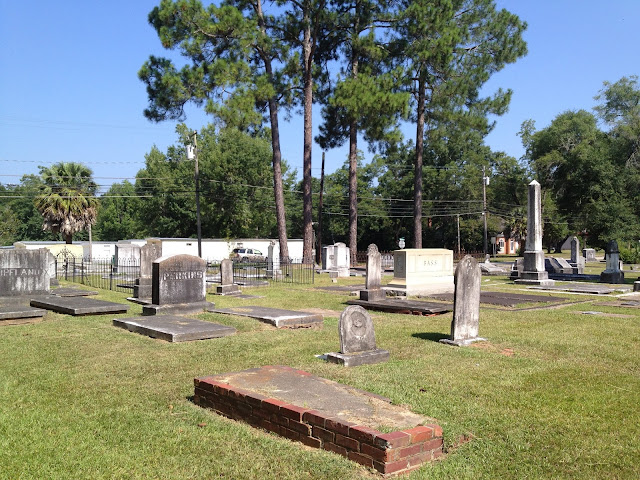 The Brundidge City Cemetery is well kept these days and also was when mom and her sisters visited. 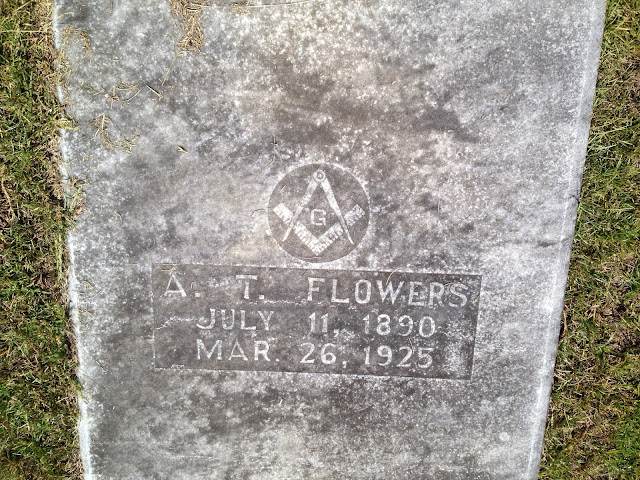 Interestingly, there were two lines of Flowers living in Brundidge who were not related. Arthur Talmage Flowers was a member of the line we are not related to. The symbol above his name indicates he was a Mason. He married Vela, one of Tempe's younger sisters. Thus a Flowers married a Flowers. 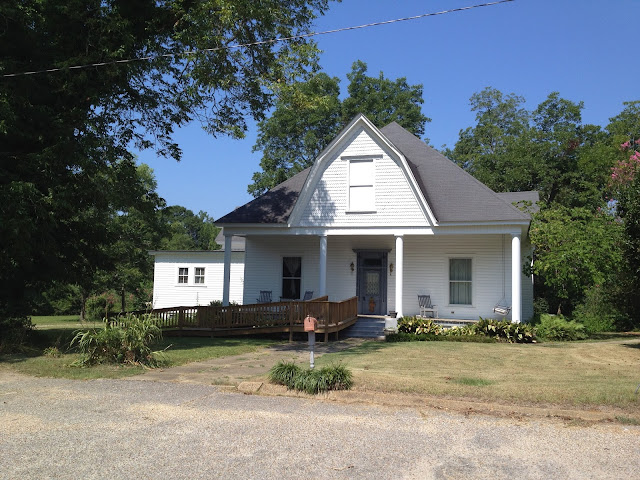 Here's the house where my grandmother Tempe Hilliard Flowers Shores was born and where mom and family visited many times. 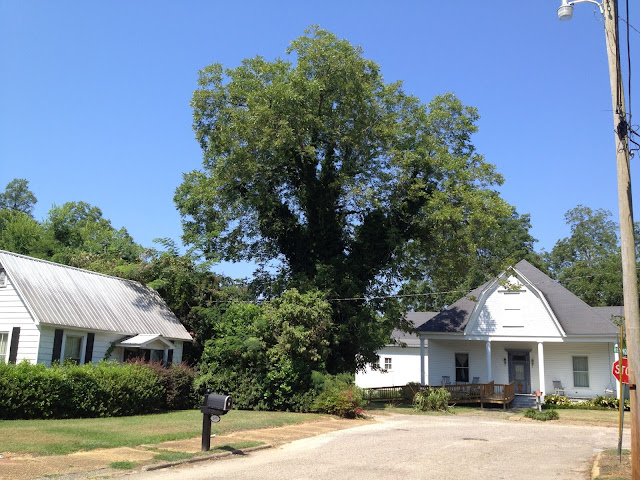 Mom said she remembers playing around the big tree. The small house on the left is a more recent addition to the street.


The three photographs below from family collections show the house and barn in earlier decades. 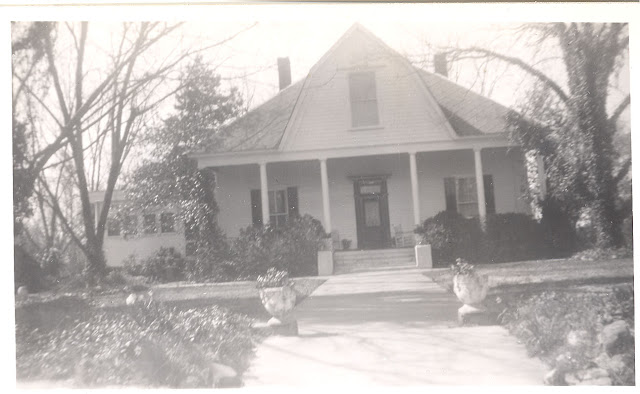 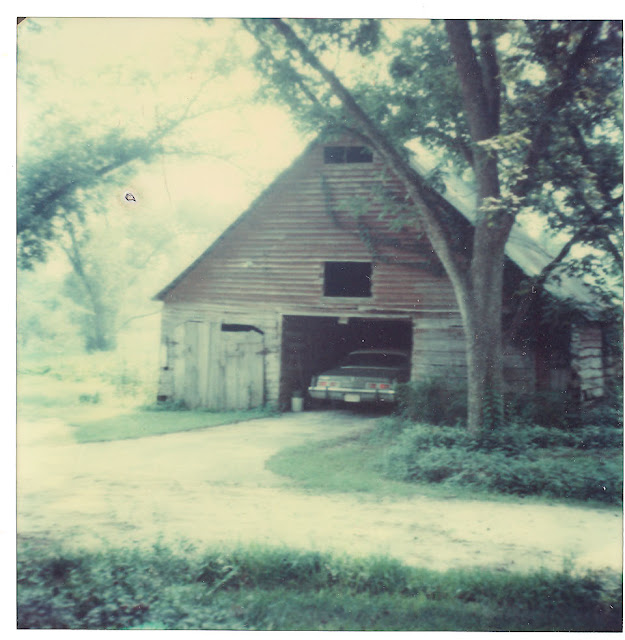 The barn no longer exists, but the house and its small addition to the left--done originally for a master bedroom with bath--look pretty much the same. My aunt Heth was born in the house. 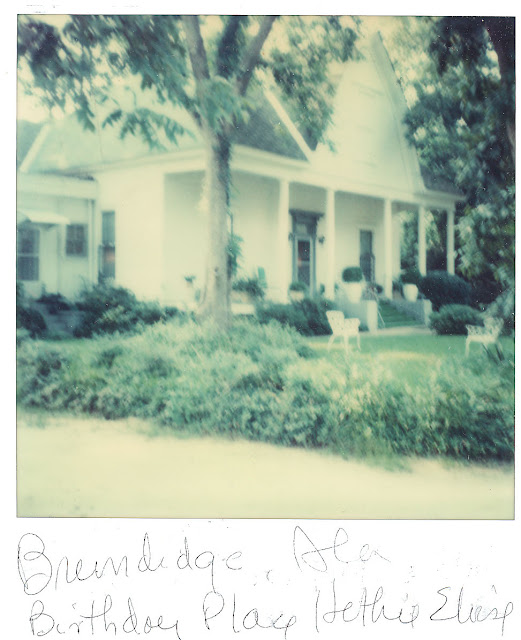 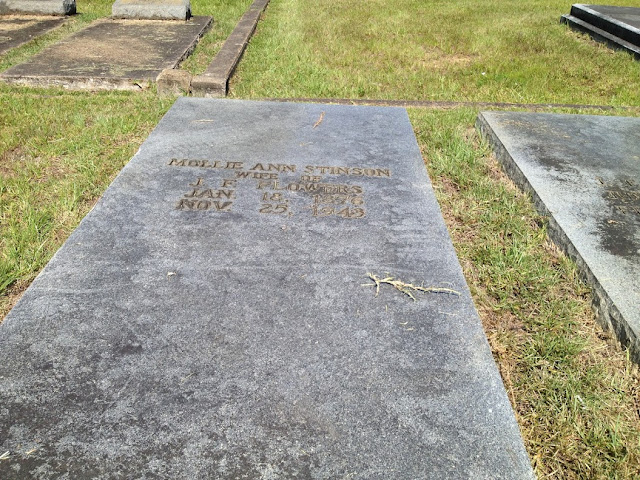 Tempe's parents, my great-grandparents Joseph and Mollie Flowers, are buried in the Brundidge City Cemetery. Their daughter Vela is buried close to them. 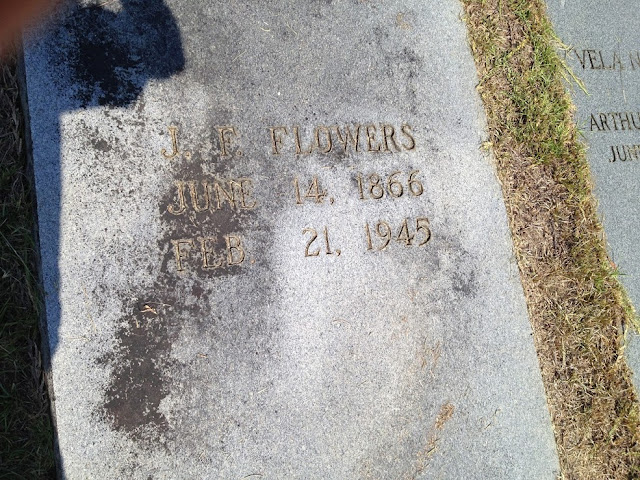 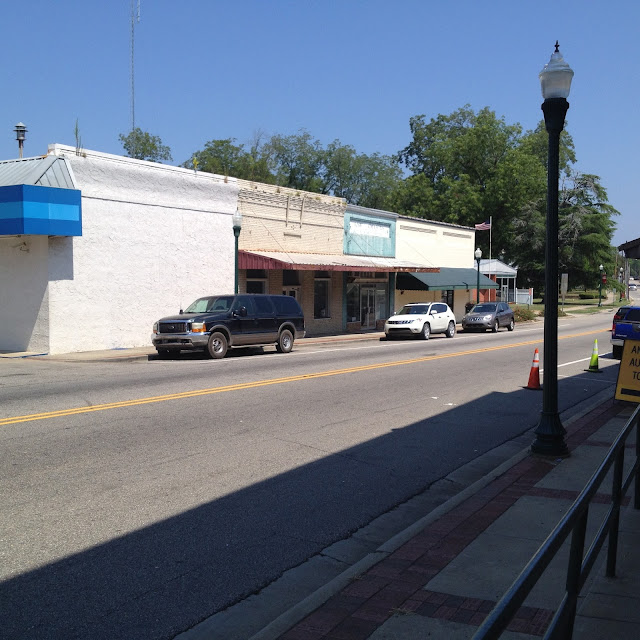 The storefronts on this part of Brundidge's main street have remained much the same for many years. The far white building was my great-grandfather's general store. 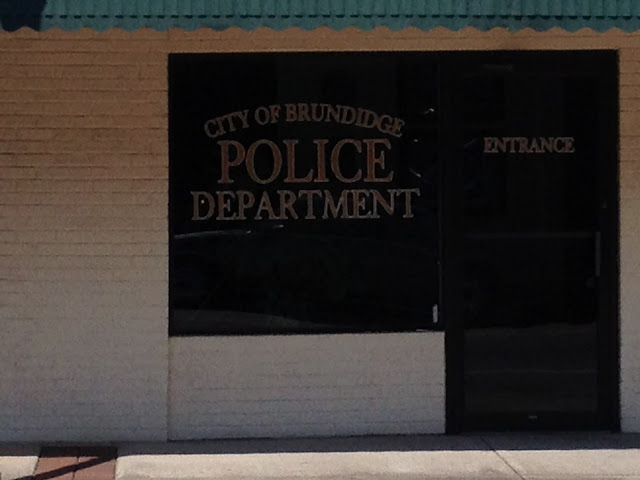 The general store is now the Brundidge Police Department headquarters. Richard and I went inside and explained our interest to the two young people working there on a Saturday morning. 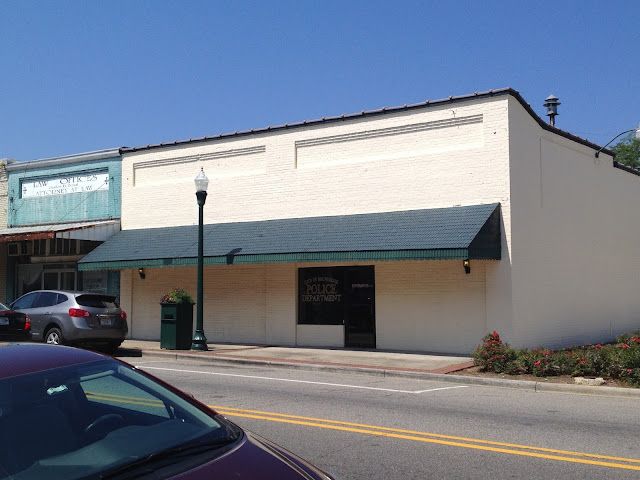 Here's a closer view of the storefront. Next door is a law office. Mom said when she and her sisters visited a liquor store occupied the site. She said her grandfather Joseph Flowers, a Methodist teetotaler, would have been horrified.

Mom remembers being taken to the store by "Papa" as a young girl, allowed to play there and take naps atop a stack of overalls. The pile was so high "Papa" had to put her up there and take her down. 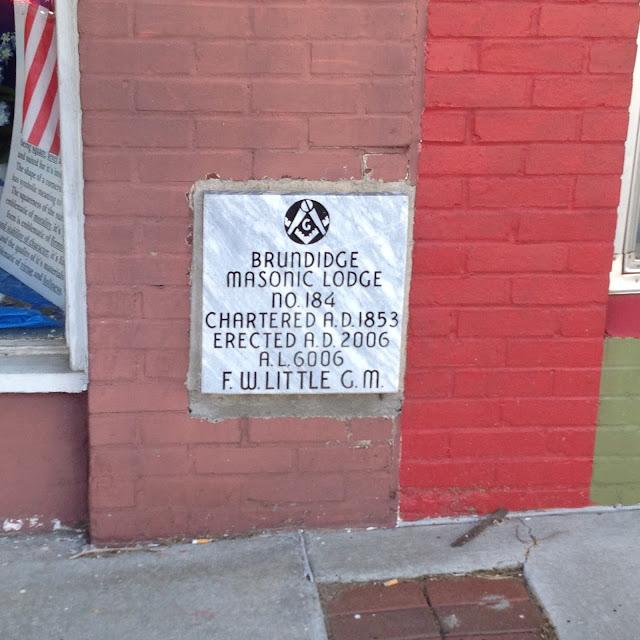 The Masonic lodge is currently located on the main street. A.T. Flowers was probably a member of this lodge. 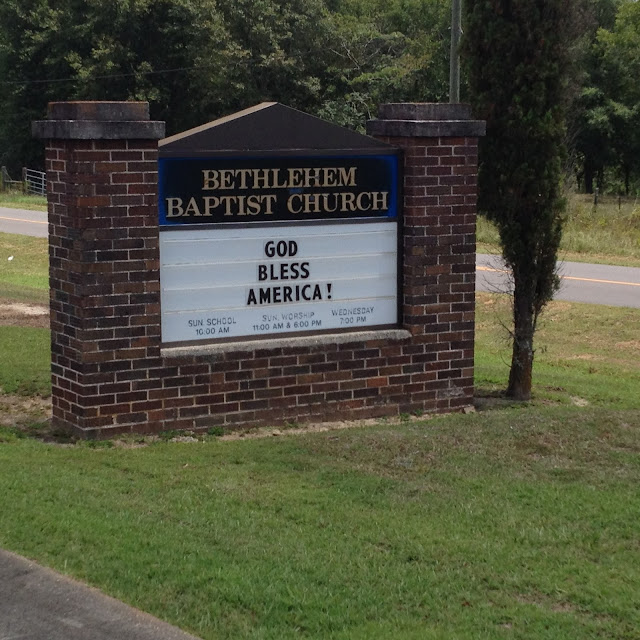 This Baptist church is located a few miles west of Brundidge near a place once known as Hilliards Crossroads. 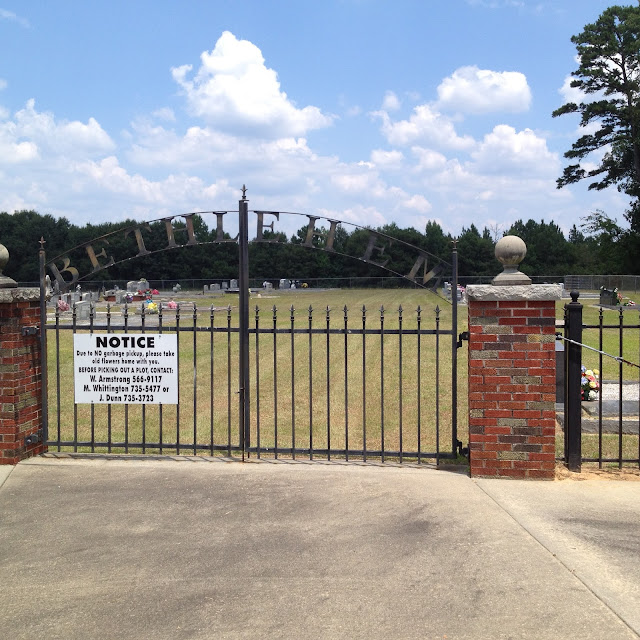 Many of our Flowers and Hilliard ancestors are buried in this cemetery behind the church. 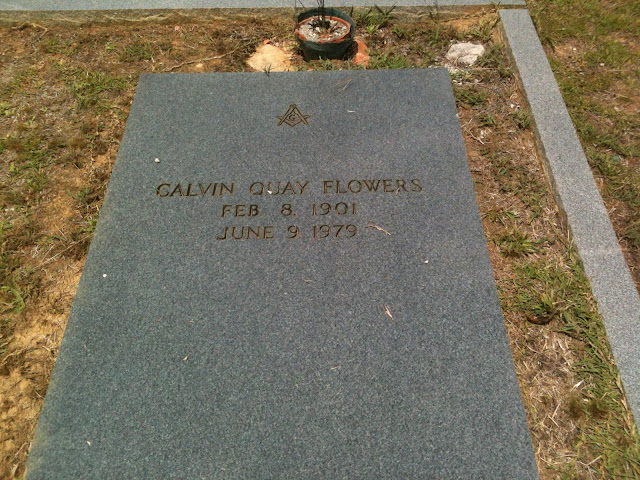 This side of my family seems to have had several Masons; my grandfather John Miller Shores was also a member. Quay was our great-uncle, and Tempe Flowers Shores' younger brother.

Posted by AlabamaYesterdays at 1:26 PM