People of a certain age in the Birmingham area will remember the Bruno's grocery store chain. From 1932 when Joseph Bruno opened his first grocery in the city until around 2012, the firm at its peak operated as many as 150 stores under the Bruno's, Food World, Big B Drugs and other names. At its height 14,000 people were employed in the operations.

Bruno had retired by 1977, and his brother Angelo and several other executives were killed in a plane crash in 1991. In 1995 the firm was sold to the first of several new owners, and the decline began. After two bankruptcies, the remaining locations were sold to Belle Foods in 2012. Belle entered bankruptcy the following year, and Bruno's and its other stores slowly disappeared until all were gone. Details of the long, sad tale can be found on the BhamWiki page linked above.

Dianne and I were recently on a Florida trip that included a weekend visit to the Fort Myers area. Our hostess drove us around the area along the coast to show us the endless parade of mansions and tourist rentals and retail shops. I had not been to that part of the state since the late 1960's when my family spent summer vacations in Naples. Dianne had never been that far south in Florida.

At some point we passed the convenience store below on McGregor Boulevard in Fort Myers. Naturally my first thought was how did this remnant of Bruno's end up here? But I guess it's just one of those weird coincidences, and the Bruno here is not the Birmingham Bruno. Ah, well.... 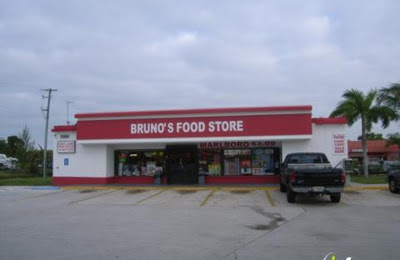 Source is here. I was unable to get a photo myself.

Source for both logos: BhamWiki