We were in Colorado Springs for several weeks in October and November 2017, and I had time to peruse my father-in-law's extensive collection of vinyl record albums. He was primarily a fan of the big bands and singers like Frank Sinatra, but he also had a few curiosities. So naturally I came up with one of those blog posts I love so well, random stuff with some Alabama connection buried in there somewhere.

Think of this post as an opportunity to brush up on some musical popular culture from the 1950's and 1960's and even earlier. I know I learned a few things, so here we go. 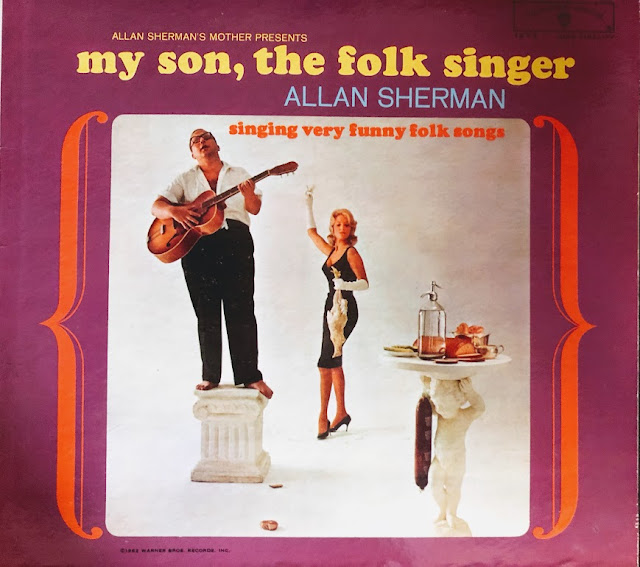 Allan Sherman [1924-1973] was a comedy writer and producer and a song parody genius. He created the concept and produced the television game show I've Got a Secret which ran from 1952 until 1967. He also wrote folk song parodies infused with Jewish humor to entertain at parties and released this first album in 1962. In the late summer of 1963 his most famous parody, "Hello Muddah, Hello Fadduh" about a young boy writing his parents from camp, reached number 2 on the Billboard chart. He released eight more albums and did other work before his death. 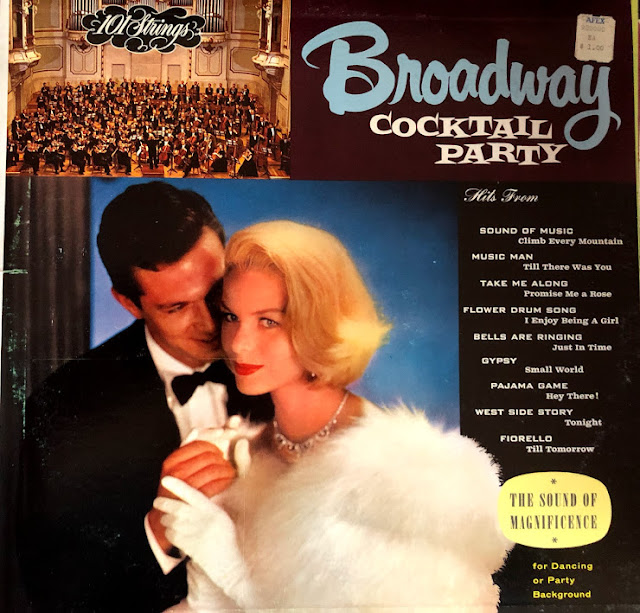 The 101 Strings was an easy listening orchestra that recorded more than 150 albums from 1957 until 1981. Many were released as CDs in the 1990's as by the New 101 Strings. The actual group was the Northwest German Radio Orchestra of Hamburg conducted by Wilhelm Stephan. This album was released in 1960. 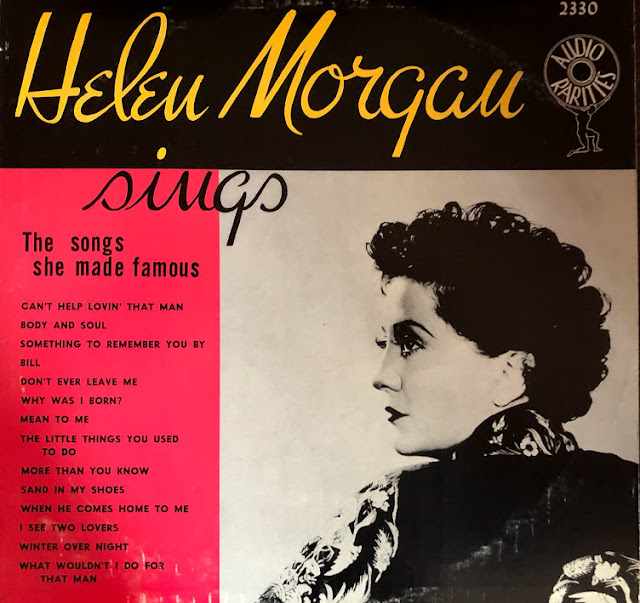 In her day Helen Morgan [1900-1941] was a well-known club singer of primarily torch songs who also appeared in films and stage productions. Her alcoholism led to an early death from liver cirrhosis. Her life and career were the subjects of the 1957 film The Helen Morgan Story. 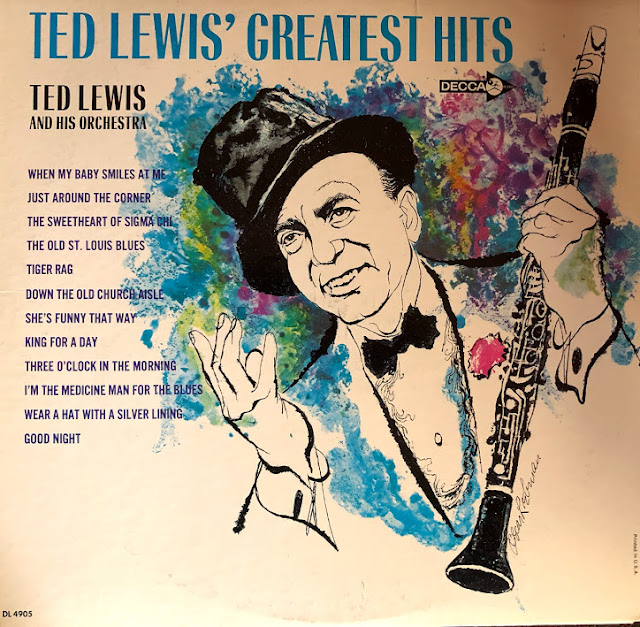 Ted Lewis [1890-1971] was a musician, singer and bandleader. He was especially popular before and after World War II with a stage show that combined jazz, comedy and nostalgia. Lewis was one of the early northern musicians to take up New Orleans style jazz and by 1919 led his own band recording for Columbia Records. Future musical stars such as Benny Goodman and Jimmy Dorsey played with Lewis. His career continued into the 1960's with Las Vegas and television appearances.

This album was released in 1967. His lengthy discography of recordings as a band leader can be found here. 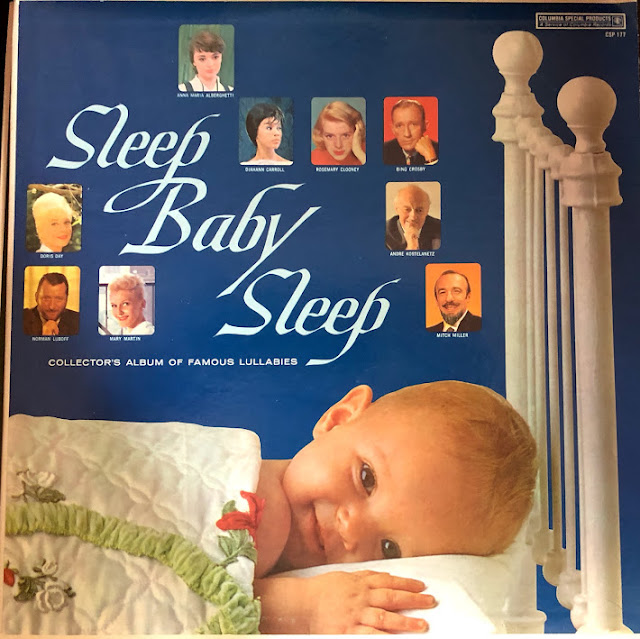 I wonder if any of these lullabies would work with my six-and-a half months old grandson Ezra? 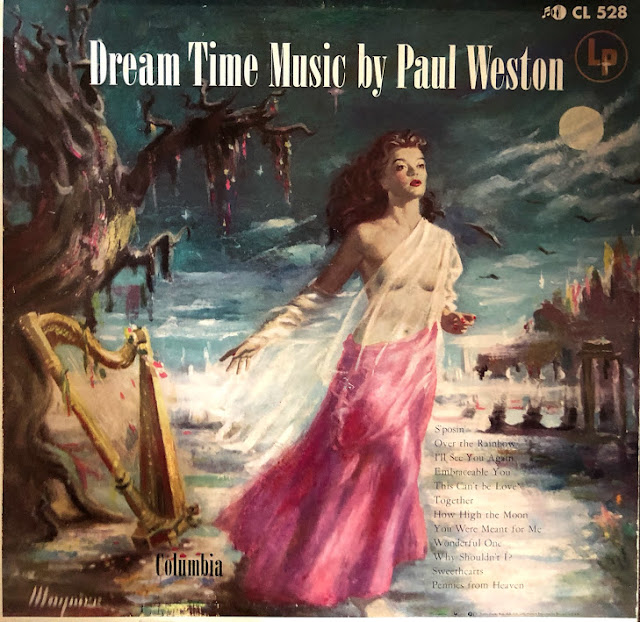 Paul Weston [1912-1996] was a pianist, composer, arranger and conductor.  His career extended from the 1930's into the 1970's and included work in radio and  television. Weston became known as the "Father of Mood Music". He was married to singer Jo Stafford.

A great history of the genre is Joseph Lanza's 2004 book, Elevator Music: A Surreal History of Muzak, Easy-Listening, and Other Moodsong; Revised and Expanded Edition. 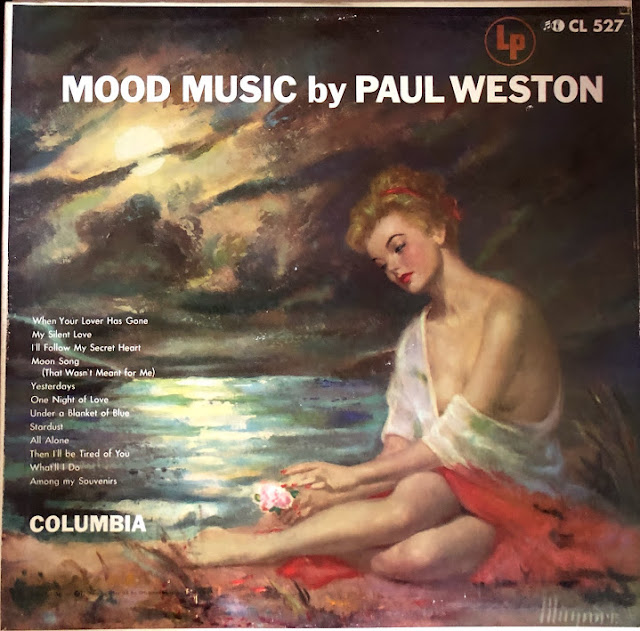 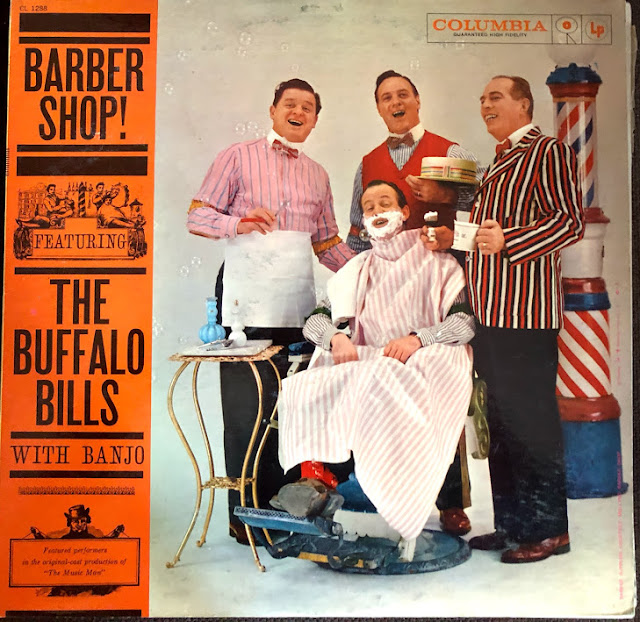 The Buffalo Bills were a barbershop quartet that started in Buffalo, New York, and performed from 1947 until 1967. They appeared in The Music Man on Broadway in 1957 and in the film version released in 1962. This album was released in 1959. 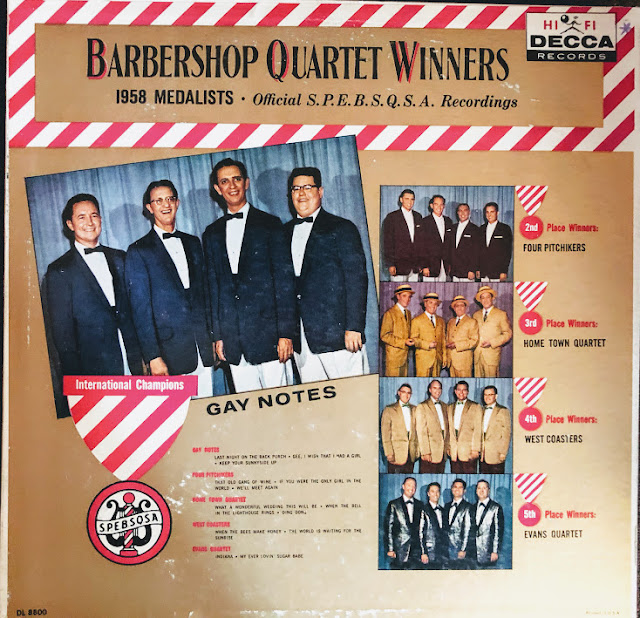 The lengthy acronym on the cover stands for the "Society for the Preservation and Encouragement of Barbershop Quartet Singing in America". The group is now known as the Barbershop Harmony Society. 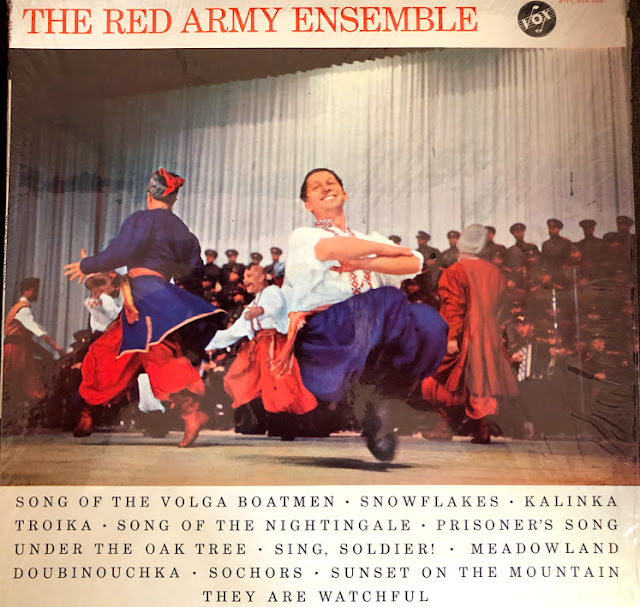 The Red Army Ensemble or Choir is also known as the Alexandrov Ensemble after its first director. Formed during the Soviet era in Russia, the group consists of an orchestra, choir and dancers. Founded in 1928, the group continues to perform today. This album with this cover was released in 1963. 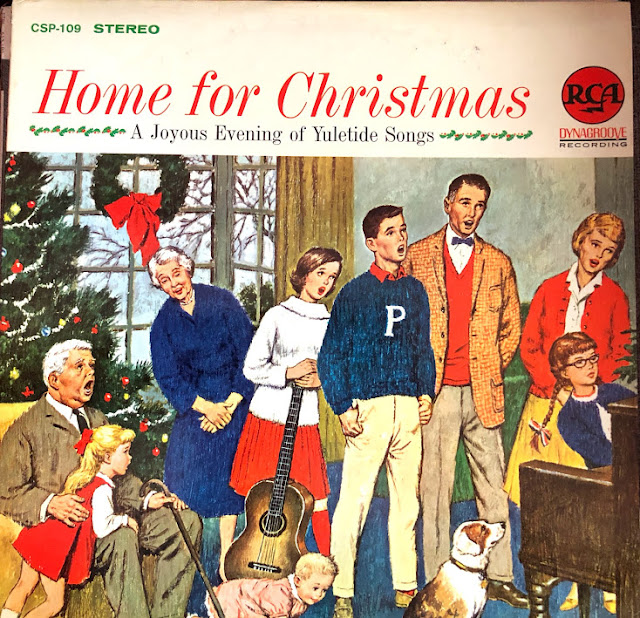 Doesn't this cover just make you tingly all over with nostalgia? RCA released this classic in 1964.

I assume the sweater "P" stands for Princeton. 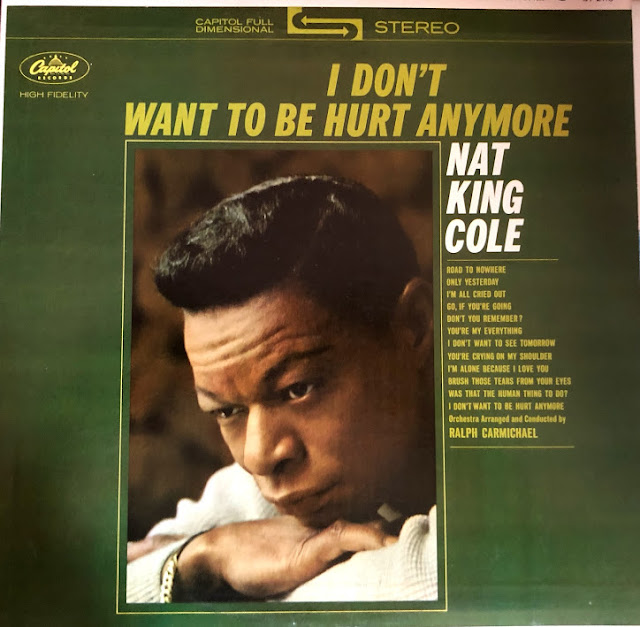 Now we come to the Alabama portion of our trip down somebody's memory lane. As Wikipedia notes, the Montgomery native "recorded over one hundred songs that became hits on the pop charts. His trio was the model for small jazz ensembles that followed. Cole also acted in films and on television and performed on Broadway. He was the first black man to host an American television series."

The Cole family moved to Chicago when Nat was four; he dropped out of high school at fifteen to pursue his interest in music. His three brothers Eddie, Ike and Freddy also had musical talents and interests. In the late 1930's Nat had limited success with various bands and then formed his trio. In 1940 the King Cole Trio had its first hit song, "Sweet Lorraine."

Enormous success followed, including many hit records, a radio show, and a TV show that premiered on NBC in November 1956. In 1958 he went to Cuba and recorded an album in Spanish; he won a Grammy the following year. His recordings sold in the millions.

Always a heavy smoker, Cole developed lung cancer and died in February 1965 at age 45. His Wikipedia entry sums up his career:

"Cole's success at Capitol Records, for which he recorded more than 150 singles that reached the Billboard Pop, R&B, and Country charts, has yet to be matched by any Capitol artist. His records sold 50 million copies during his career. His recording of "The Christmas Song" still receives airplay every holiday season, even hitting the Billboard Top 40 in December 2017."

I Don't Want to Be Hurt Anymore was Cole's next to last album, recorded between
mid-January and early May 1964. The orchestral arrangements were done by Ralph
Carmichael, who worked with Cole from 1960 until the singer's death. 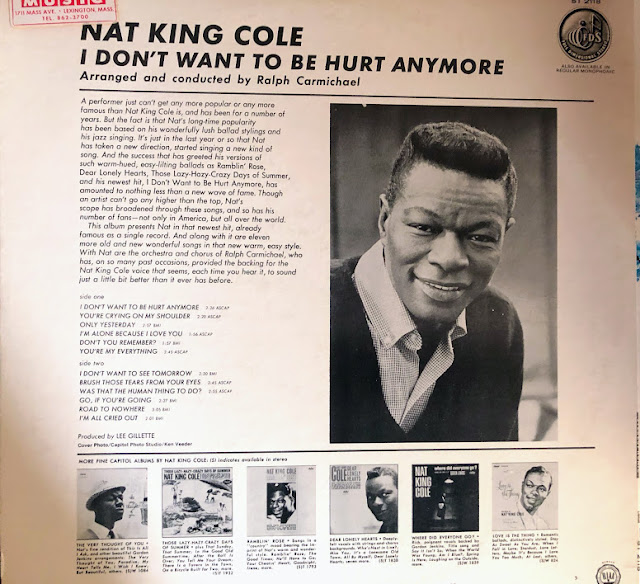 Posted by AlabamaYesterdays at 8:45 AM