A Visit to Gaineswood, Part 1

In March 2018 we visited our son Amos in New Orleans. On the way back we spent the night in Demopolis; I've  written about that stay here. We passed through Eutaw on the way home the next day, and a bit about that town is here.

We stayed in Demopolis to see the spectacular mansion of Gaineswood, and now I'm posting a two-part piece devoted just to that former home and now museum. If you have never been to Gaineswood, it's well worth a visit if you get to that part of the state. Actually, it's worth a special trip just to see it. Demopolis also has other historic structures to see including house museums Bluff Hall and Lyon Hall.

We arrived on a weekday morning at about 10 AM when the home opened to the public. The lady who turned out to be our guide was picking up some trash near the gate where we parked. After some small talk we started walking toward the public entrance at the rear and began our tour.

A 1973 statement about Gaineswood from the National Park Service's National Historic Landmarks Program gives a brief summation of its architectural gems:

Begun in 1842 and modified in stages over eighteen years (1843-1861), Gaineswood is one of America's most unusual neoclassical Greek Revival-style mansions. Amateur architect and cotton planter Nathan Bryan Whitfield refined his mansion with the help of skilled African-American craftsmen as the stylistic preference in America shifted from Greek Revival to Italianate. Gaineswood's sprawling, asymmetrical floor plan and lavish decorative detail brilliantly reflect that shift. The drawing room (ballroom) is highlighted by vis-à-vis mirrors, fluted Corinthian columns and pilasters, and a coffered ceiling with decoative Italianate plasterwork. The parlor and dining room have domed ceilings with windows added in 1860 to illuminate the home. Gaineswood is one of the few Greek Revivial homes that has Doric, Ionic, and Corinthian columns.

Some of that interior "lavish decorative detail" can be seen in photographs in the next part of this post.

Whitfield came from North Carolina in 1842 and bought 480 acres in Marengo County from George Strother Gaines, a federal trade agent to Native Americans in Alabama and Mississippi. Gaines had built a cabin on the site in the 1820's. He also met on his land with Pushmataha, chief of the Choctaw Nation, to negotiate their removal to Indian Territory.

Whitfield originally named his estate Marlmont, but renamed it after Gaines in 1856. Family tradition says the mansion was built around Gaines' original dog-trot log cabin. Between 1845 and 1863 slaves also dug a mile long canal to redirect rainwater and prevent flooding of the plantation.

In 1861, the year Gaineswood was finally finished, Whitfield sold it to his son Bryan, a physician. The main exterior construction of stucco over brick and the fine interior woodwork were completed by both slaves and free African-Americans and travelling artisans. John Gibson, a Scottish-born craftsman, created the glass transoms depicting classical scenes. By that time the estate comprised 7200 acres, 235 slaves and produced hundreds of bales of cotton annually. Whitfield designed the home himself, getting many ideas from architectural books of the time.

The home remained in the family until 1923 and in private hands until 1967, when it was sold to the state. Gaineswood opened to the public in 1975. The current furnishings are original to the house or appropriate to the period; many were donated by the Whitfield family. The Alabama Historical Commission currently manages the five-acre property.

Further comments are below some of the photos here. All photos are mine unless otherwise indicated.

This article examines the Whitfield family's move from North Carolina to Alabama: 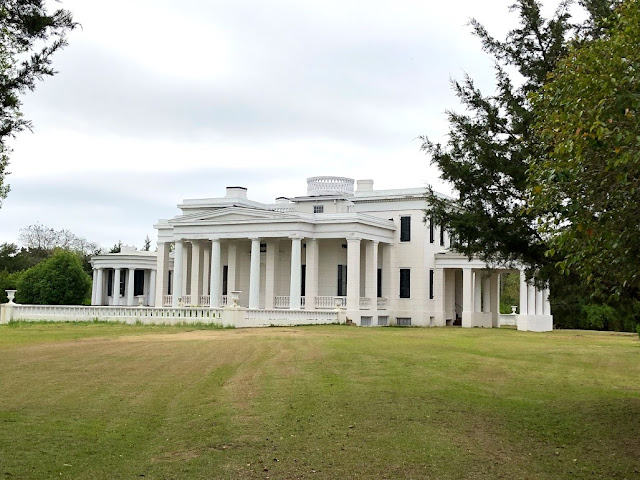 This view is what you see as you approach the house from the parking area. Some of that "lavish decorative detail" is already visible. 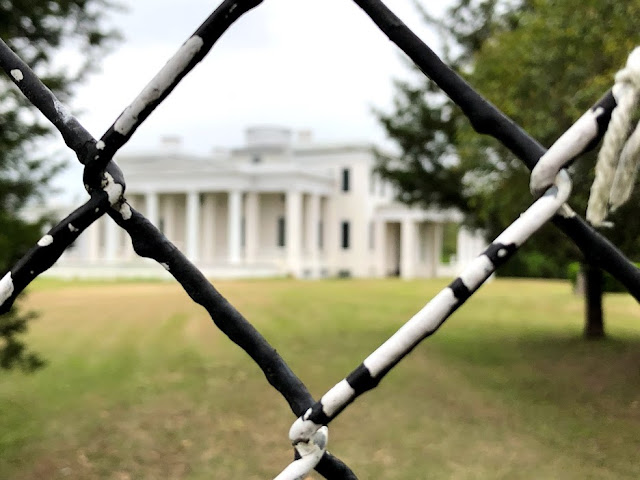 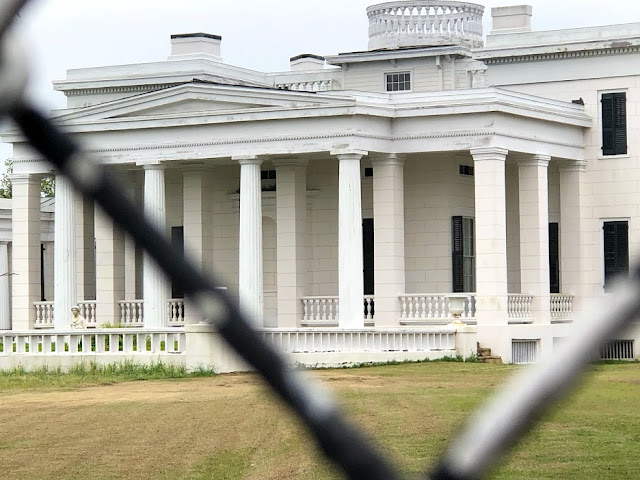 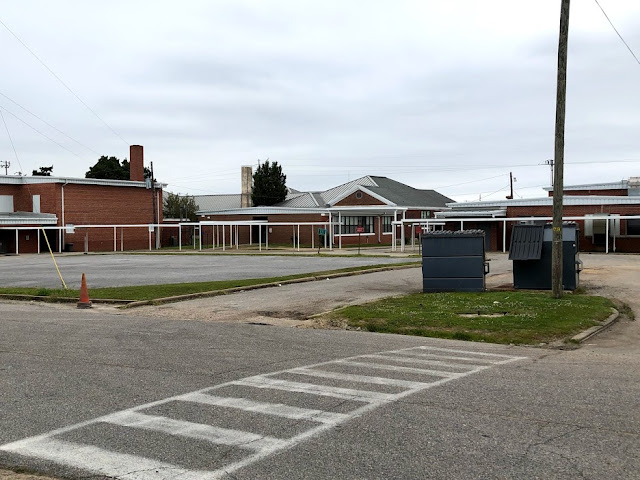 Across the road from Gaineswood is this view. The area where the estate's pond with an island was located is now the campus of Demopolis Middle School. The pond was filled as much of the property was sold over the years. 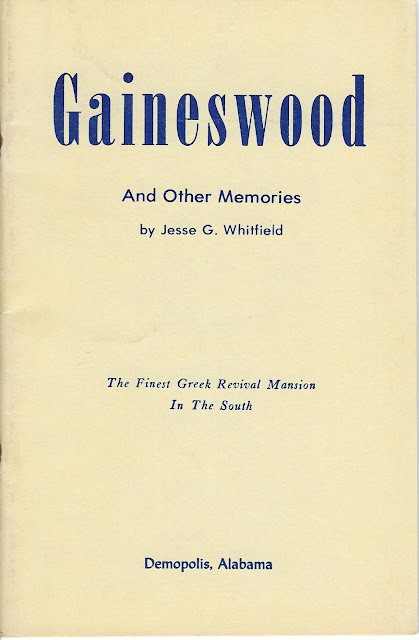 This 1938 pamphlet was written by Nathan Whitfield's grandson. He notes that the original kitchen "with its great fireplace" was located some sixty feet from the house. The acquisition of a stove led to placement of the kitchen in the basement, "and then it was found that without very serious objection a kitchen might be placed on the first floor level, and so become truly a part of the machinery of living."

Whitfield also remembers the store rooms and pantries full of good food such as "boxes of raisins from Spain" and the casks of brandied peaches and apples kept in the "still house." 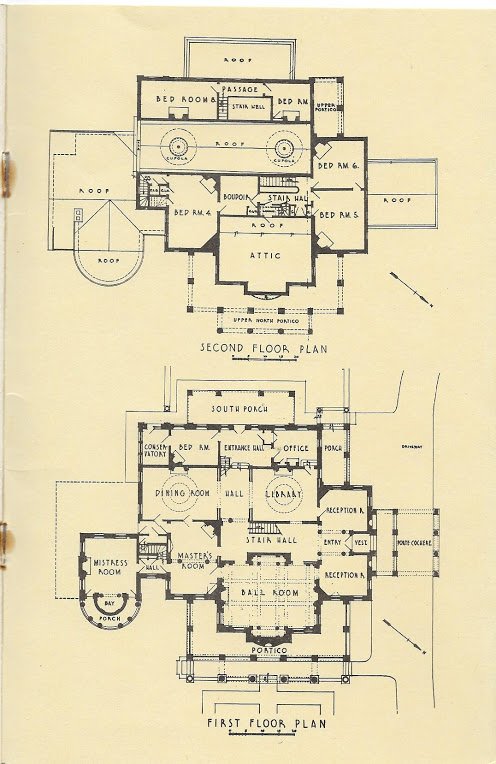 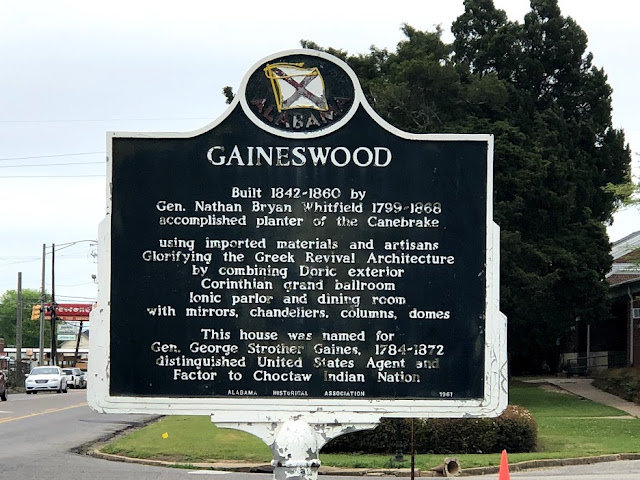 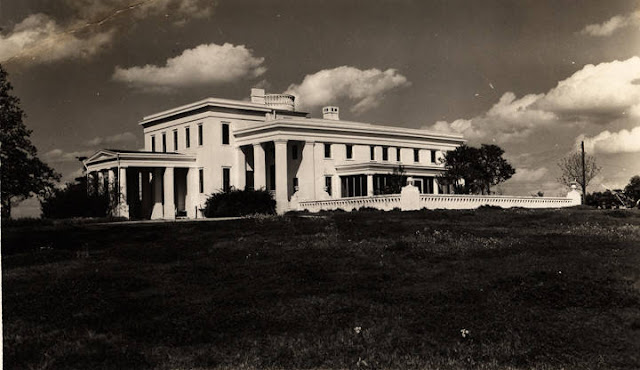 A view of Gaineswood and the gazebo taken in 1939 by Francis B. Johnston as part of the Carnegie Survey of the Architecture of the South. You can see more of Johnston's exterior and interior photos of the house here. 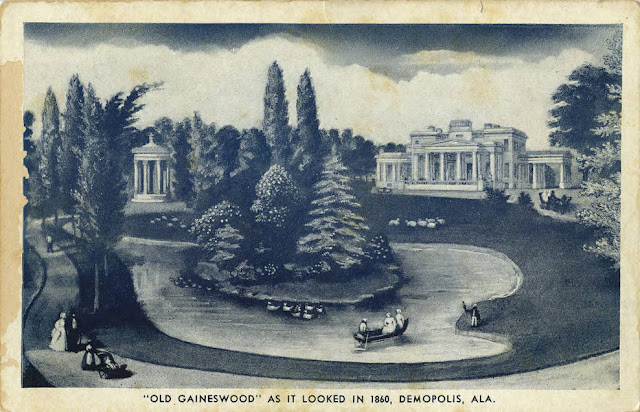 A 1910 postcard from the Eagle Post Card View Company taken from an 1860  engraving by John Sartain. That engraving is included in the Whitfield pamphlet. 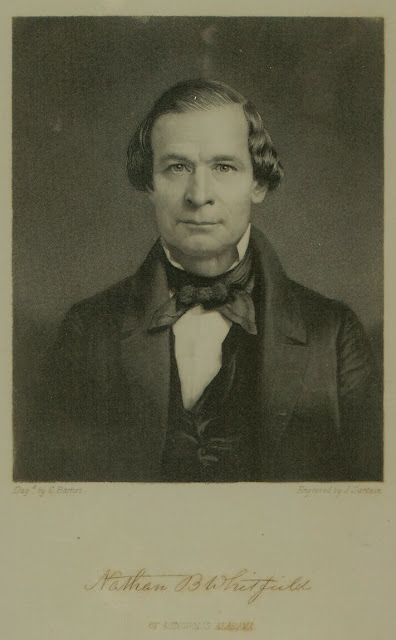 From an engraving by John Sartain


Posted by AlabamaYesterdays at 8:57 AM