The Many Versions of "The Bad Seed"

The Bad Seed was Alabama author William March's final novel, published about two months before his death on May 15, 1954, in New Orleans. Thus this prolific novelist and short story writer never saw any of the long, strange afterlife of his book. The Lifetime cable network debuted a new version of the novel on September 9, so let's take a look at March and his last work.

He was born William Edward Campbell into a poor family in Mobile in September 1893. He left school at 14 to work in a lumber mill office in Covington County, then at 16 moved to a law office in Mobile. March managed to obtain a high school diploma and then spent a year studying law at the University of Alabama. By 1916 he was clerking for a law office in New York City.

March enlisted in the Marine Corps in June 1917 and arrived in France in February 1918. He saw intense action in several battles, suffering wounds and received the French Croix de Guerre and the Distinguished Service Cross and Navy Cross for his bravery. Discharged in August 1919, March returned to Mobile and found employment with a new steamship company. He soon ascended to the post of vice-president with assignments in Memphis, New York, Hamburg and London.

He began writing fiction in the late 1920's and his first published work, a short story, appeared under the pseudonym he would use for all his fiction. His first novel, Company K, came out in 1933 and drew on his wartime experiences. Many of his subsequent novels and short stories are set in Alabama. March spent many years living in New York, but by the late 1940's his physical and mental health had declined to the point where friends persuaded him to return to Mobile. Literary success had not overcome the traumas March suffered from his military service. In 1950 he moved to New Orleans and lived there until his death.

A much fuller examination of March's life and work can be found in his entry in the Encyclopedia of Alabama and Roy Simmonds' 1984 biography The Two Worlds of William March.

Much of March's fiction is based on his personal experiences, either in World War I or growing up and living in Alabama. The Bad Seed is something else. The book works the nature versus nurture approach--are killers born or made? The story follows Rhoda, a blonde and precocious child who happens to be a killer. And she has a grandmother who was a serial killer and executed in the electric chair. Her parents simply can't accept her daughter is capable of such acts.

The character is now a common trope in popular culture--the evil child. When March wrote the novel, the very idea was shocking. You can read a detailed summary of the story at the Wikipedia entry. More comments are below. 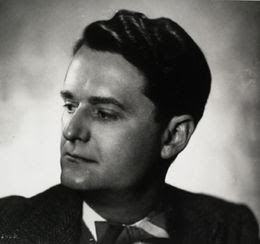 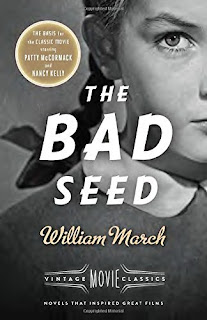 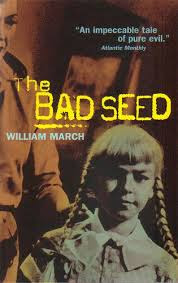 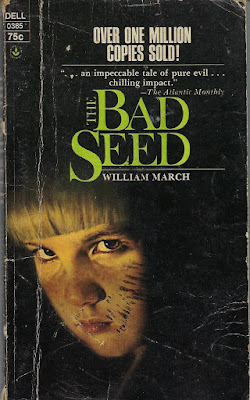 The edition I own is this one from Dell, a paperback published in February 1972. 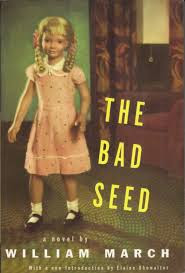 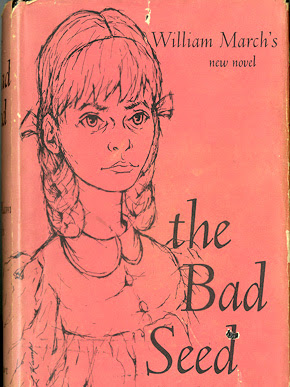 The first edition of the hardback that appeared in 1954 was published by Rinehart and Company. You can currently find a used copy described as "acceptable" for $895 and one as "very good" for $1142 on Amazon. But that's crazy; several copies can be found via Bookfinder.com for $100 or so. 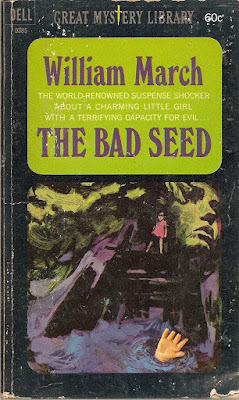 This edition appeared in Dell Publishing's Great Mystery Library series. Based on the price, I'd guess it was published in the 1960's. 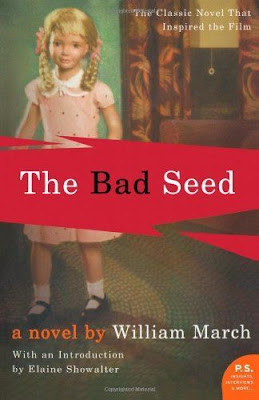 This 2005 paperback edition was published by Harper Perennial. 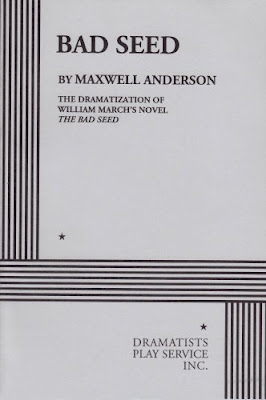 March's novel appeared in March 1954, and on December 8 the play opened at the 46th Street Theatre on Broadway. The novel was adapted for the stage by Maxwell Anderson, a prolific dramatist. The combination of March and Anderson's reputations and the subject matter drew interest; Life magazine covered the play in its issue published a week before opening. The play ran for 334 performances until September 27, 1955.

Nancy Kelly won a Tony Award as Best Actress for her performance as the mother. Patty McCormack starred as Rhoda her daughter. Eileen Heckert and Henry Jones also acted in the play. All four repeated their roles in the film. 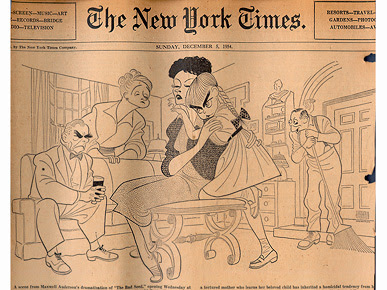 An Al Hirschfeld drawing of the Broadway play, The Bad Seed, adapted from the William March novel of the same name for the stage by Maxwell Anderson in 1954.
Courtesy of the W.S. Hoole Special Collections Library, The University of Alabama Libraries
Source: Encyclopedia of Alabama Filming was done at Warner Brothers Studios in Burbank, California, from May until July 1955. The film was released on September 12, 1956. As noted above, the four main actors in the play appeared in the film. Hollywood veteran Mervin LeRoy served as director. In the novel and play, Rhoda lives to kill another day. In the 1956 film she is struck by lightning and dies. 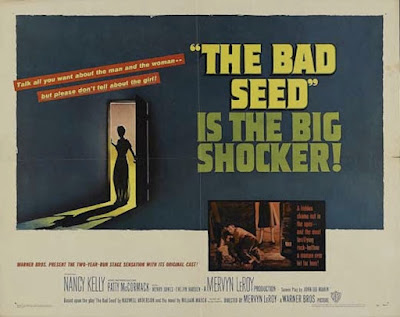 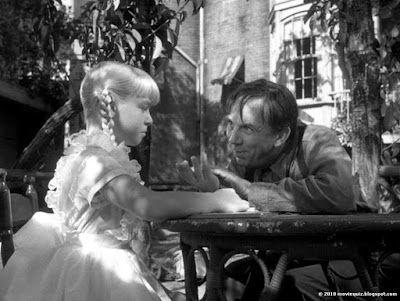 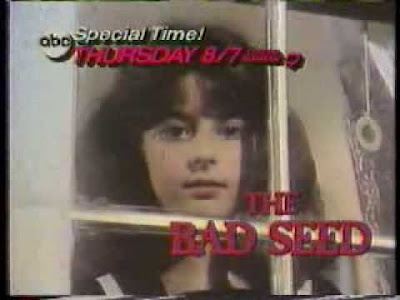 This 1985 television movie was written by George Eckstein and directed by another veteran, Paul Wendkos. The cast included Blair Brown, Lynne Redgrave, David Carradine, Richard Kiley and David Ogden Stiers. Carrie Wells played Rachel (Rhoda). The novel's ending was kept, but other changes were made, including character names. I watched this version when first broadcast on February 7, 1985, on ABC but remember little about it. 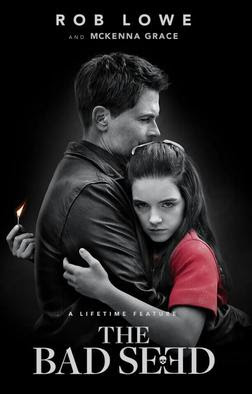 The 2018 version changes names and characters. Now we have Emma (Rhoda) and her widowed father who slowly begins to suspect the worst about his daughter. Rob Lowe plays the father, and also directs, which may account for the changes. Patty McCormack--the original Rhoda in the play and film--plays Emma's psychiatrist Dr. March.

Posted by AlabamaYesterdays at 7:50 AM