Something about Fairhope & Fort Morgan ca. 1950

The items in this post are taken from a scrapbook at mom's and probably come from the honeymoon they took after their wedding in Haleyville on September 10, 1950. Both were students at Auburn and would not have had either time or money for an extensive trip. Apparently they did make it to the Fairhope and Fort Morgan areas of Alabama.

In that period Gulf Shores and Orange Beach were not much of a thing in tourism. Until completion of the Gulf Intercoastal Waterway in 1937,  Gulf Shores was largely inaccessible beach and wetlands. A poor road led to the first beach hotel,, opened in the early 1940's and the first post office in 1947. The town was incorporated in 1958. Orange Beach had a similar development. The first hotel appeared in 1923, a paved road came in 1947, electricity the following year and telephone service in 1958. Some vacation cottages were also built in both towns.

Gulf State Park opened in 1939 and by this time organized tourism efforts began to appear in printed pamphlets and Mobile newspaper articles. World War II brought civilian workers and military personnel to the coast from Mobile to Panama City. After the war the tourist trade picked up and continues today. An excellent history of this area is Harvey Jackson's 2012 book, The Rise and Decline of the Redneck Riviera: An Insider's History of the Florida-Alabama Coast.

Mom and dad apparently chose a more developed place, Fairhope. I would imagine dad's interest in history led them to Fort Morgan. By that time the Dixie Graves Parkway had been built out to Fort Morgan, so roads were pretty good to both places.

I have so far been unable to find any information on the businesses noted below where mom and dad must have eaten and stayed. More information on two individuals named here is at the end of the post.

If you have information about these places, leave a note in the comments. 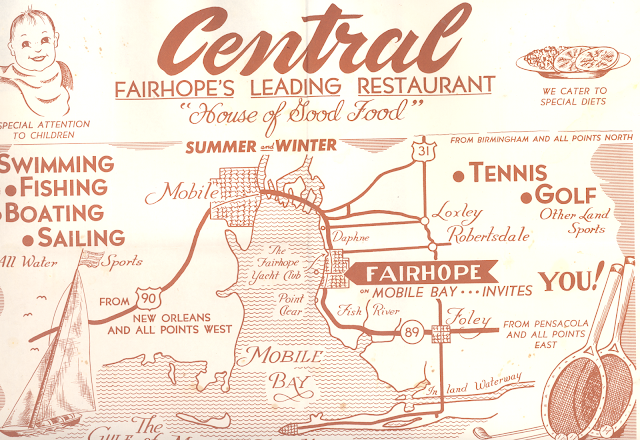 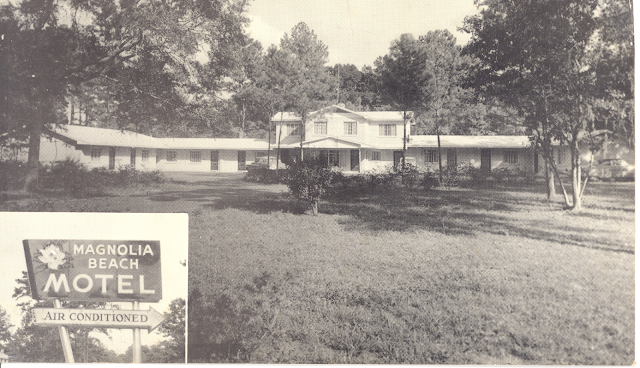 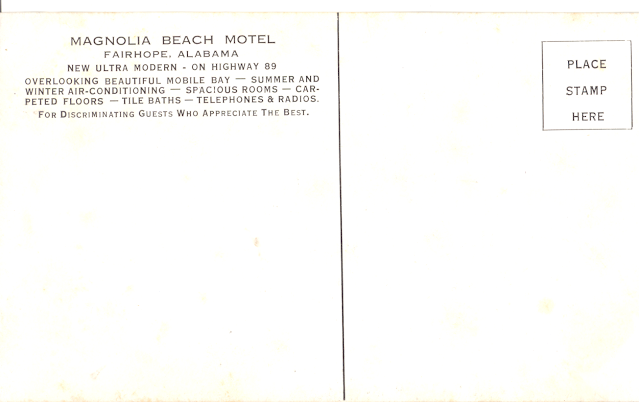 I wonder what's on this spot today. I can find the intersection of South Church Street and Fairhope Avenue on Google Maps or Earth, but with no address I don't know which of the four corners was the one.

A Robert K. Summersell turns up in Mobile in the 1930 U.S. Census working as a punchman; in the 1940 census he was a salesman. His Find-A-Grave entry is here. 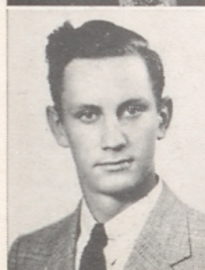 According to his Society Security record, Captain Ras Crenshaw was Erastus Sylvester Crenshaw, Jr., born on October 11, 1920, in Bayou La Batre. He died on August 30, 1993. 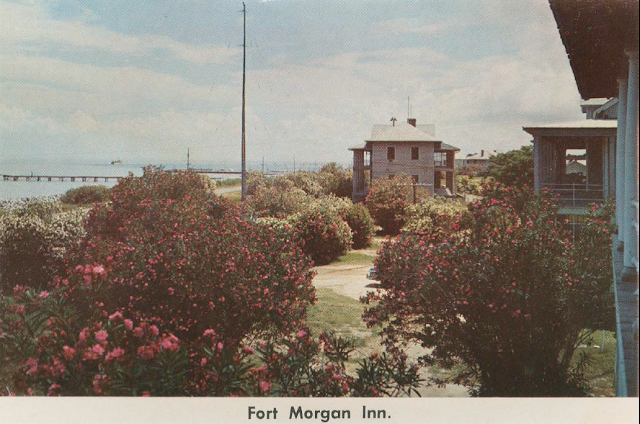 From a "Welcome to Gulf Shores, Alabama" postcard packet ca. 1960